The bear market in bonds last year was a shock to markets and raised questions around the role of fixed income securities in portfolios. This is because, until 2021, inflation had been steadily falling for 40 years, pushing interest rates lower and bond prices higher. This period supported the idea that bonds act as a stable foundation to portfolios, counterbalancing the price swings in stocks and other riskier assets.

Naturally, with stocks and bonds both falling last year, many investors may be wondering if they need to rethink the role of fixed income in their portfolios. As is often the case, it’s important to maintain a longer-term perspective on recent events.

While it’s far too soon to say with certainty, this year is already shaping up to be very different and few economists and investors expect interest rates to jump as much as they did last year. In fact, it’s been the opposite – after peaking above 4.2% last October, the 10-year Treasury yield has been falling.

This is in large part because inflation is moving in the right direction. Recent Consumer Price Index data showed that overall inflation declined in December by -0.1% month-over-month, or an annualized rate of -0.9%. Core inflation, which excludes food and energy, is still rising but the pace has slowed over the past several months. Components such as new and used vehicles are experiencing significant price drops and improving rents may help shelter costs as leases roll over.

Bonds have had a positive start to the year 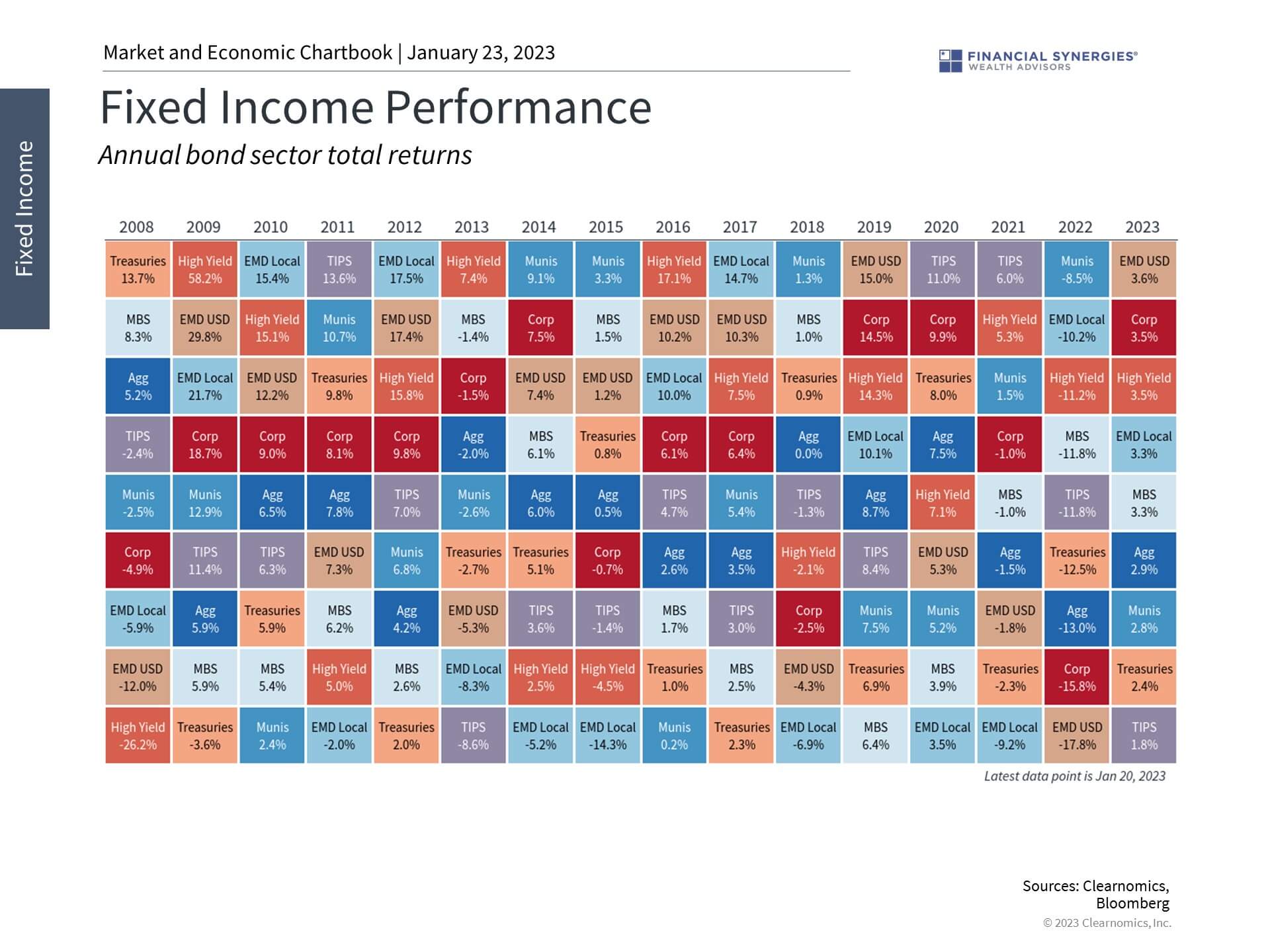 So, while consumer prices are still 6.5% higher compared to the year before, this is a backward-looking number since many price categories are improving. Treasury Inflation-Protected Securities (TIPS) are now being priced based on the expectation of only 2.2% annual inflation over the next 5 and 10 years. Inflation is a scourge on bonds since higher consumer prices cause investors to demand higher interest rates. The recent reversal has allowed interest rates to ease and increases the likelihood that the Fed will pause its rate hikes later this year, brightening the economic outlook.

This helps long-term investors because interest rates and bond prices are two sides of the same coin. When interest rates rise, bond prices fall, and vice versa. One intuitive way to understand this is that the cheaper you can buy a bond with a specified payout schedule, the higher your eventual return, or yield, will be. Thus, another way to view last year’s fall in bond prices is that bond yields are now much more attractive. 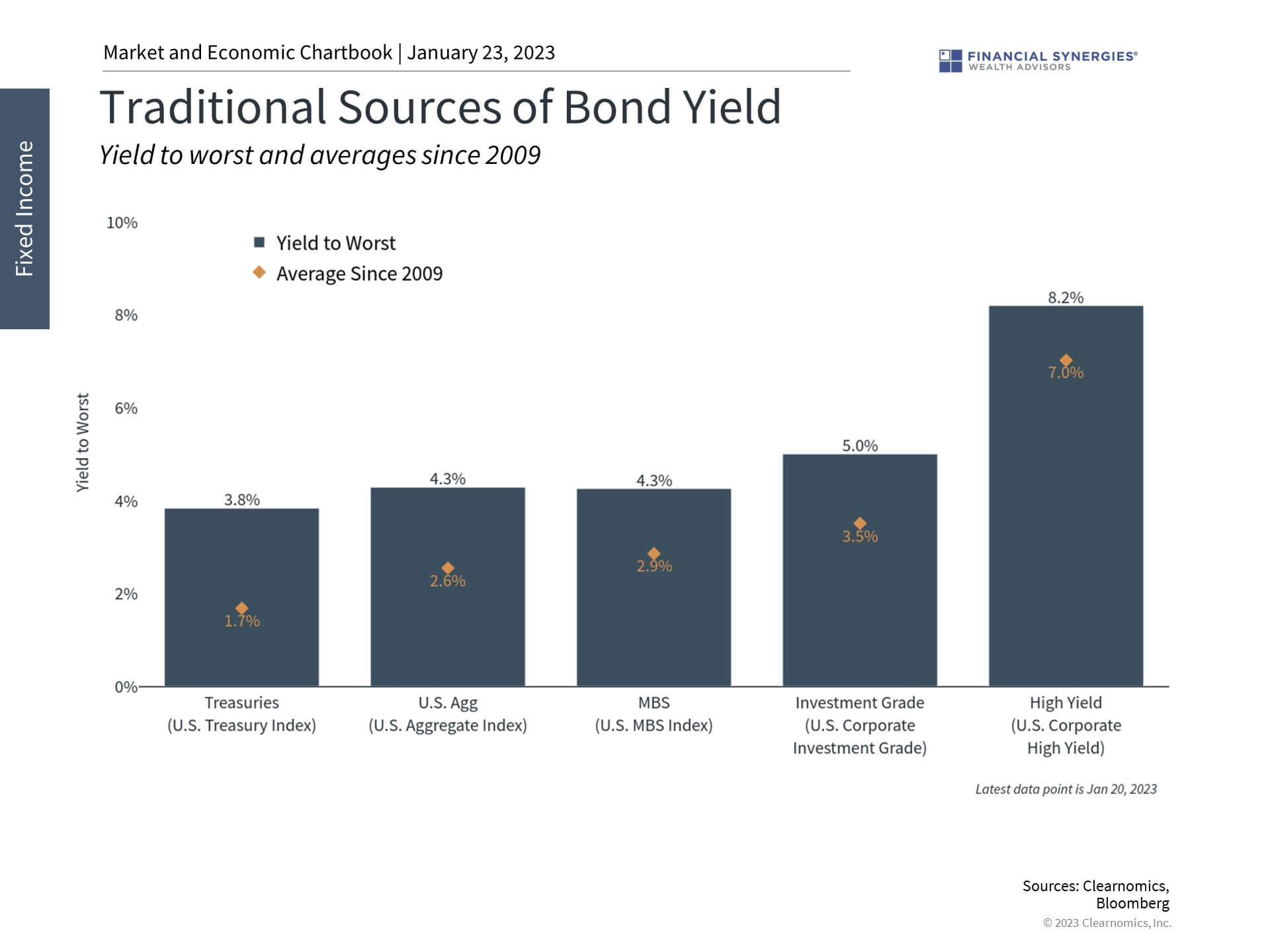 In other words, buying low and selling high applies just as much to bonds as it does to stocks. Today’s bond yields are the highest they have been since the global financial crisis across many major bond sectors. A diversified index of Treasuries yields 3.8% – well above the 1.7% average since 2009.  Investment grade corporate bonds generate 5% and high yield bonds 8.2%. It’s now possible for investors to generate income with higher quality fixed income securities, a reversal of the trends of the past 14 years during which investors had to take more risk in order to find sufficient yield.

Corporate bond yields and credit spreads have improved too 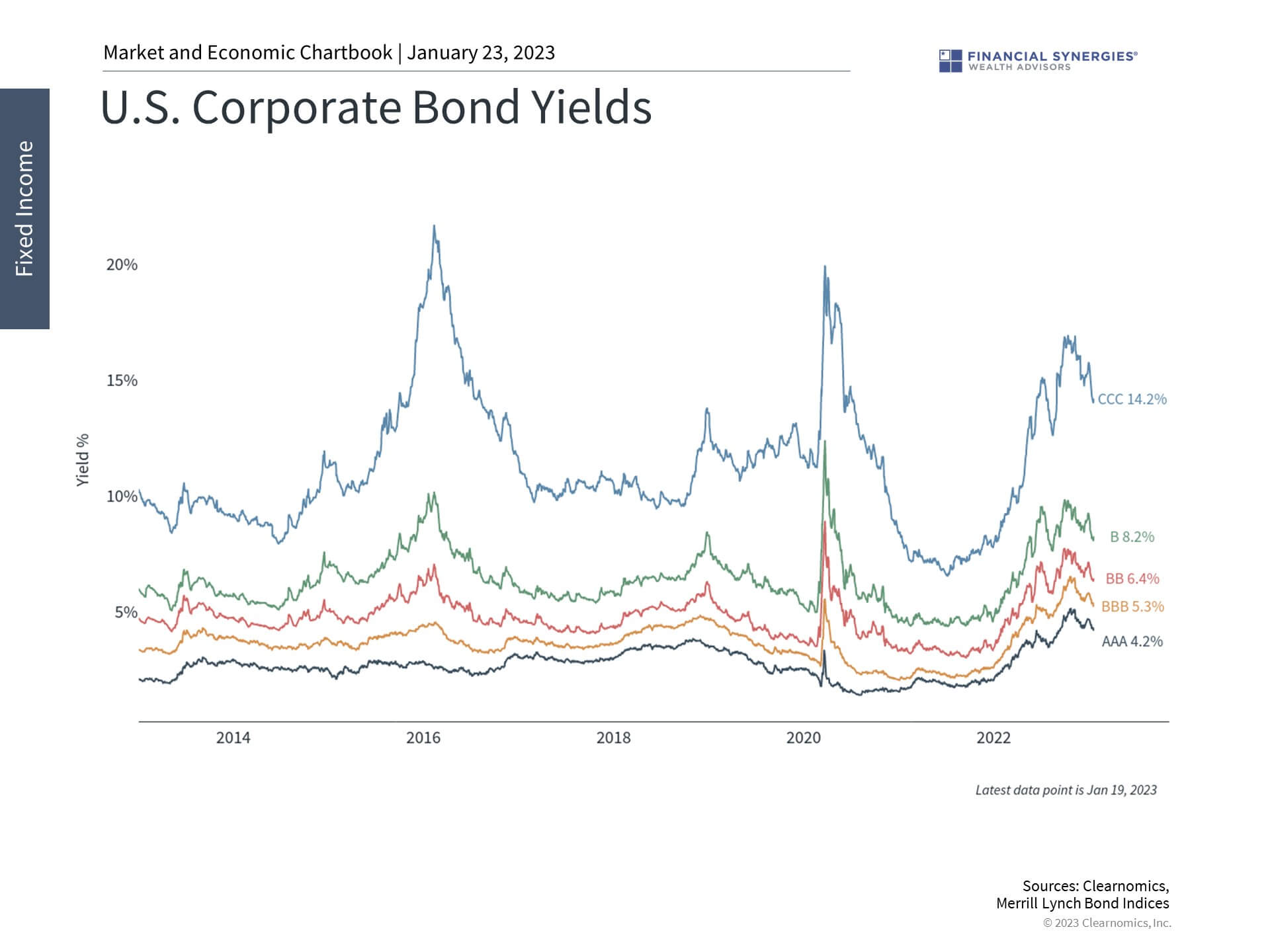 Additionally, the credit outlook is still positive despite a possible slowdown in the economy and earnings growth. Credit spreads have actually improved in recent months as economic figures, especially for the job market, remain strong and the likelihood of a pause in Fed tightening increases. All in all, this means that even if there is a recession, markets expect that it would be mild and that companies would still be well-positioned to repay their debts.

Of course, it’s still early in the year and there are always risks to consider. A protracted debt ceiling battle in Washington could once again threaten the bond market as it did in 2011 when Standard & Poor’s downgraded the U.S. debt – but this political theater will not have any lasting impact on the markets. Commodity prices could jump again and supply chains could be disrupted if geopolitical conflicts worsen. Credit default rates could rise if a worse-than-expected economic downturn were to occur, or if international weakness spills into the U.S.

As is always the case, investors will need to take these risks in stride without jeopardizing their financial goals. After all, buying and holding bonds at these prices and yields is not a short-term play, but one intended to position portfolios for the years and decades to come.

As I wrote last year, it’s not time to abandon bonds. Yes, it’s been a painful experience for bond investors, but if they were included in your portfolio as part of a long-term foundation then they still have a place today.