It’s Not Time to Abandon Bonds

This year has been historically bad for bonds, and while swift bond price declines can be upsetting, it’s not time to abandon bonds. Instead, focus on the long-term benefits of higher interest rates for bonds.

Bond total returns have two main components: price return and return from income. Changes to interest rates cause these two components to move in opposite directions. As medium- to long-term investors, we should focus more on bond total returns instead of the negative short-term impact on bond prices. In fact, as we show in the chart below, the long-term performance of bond investments has come mostly from income return, not price return. 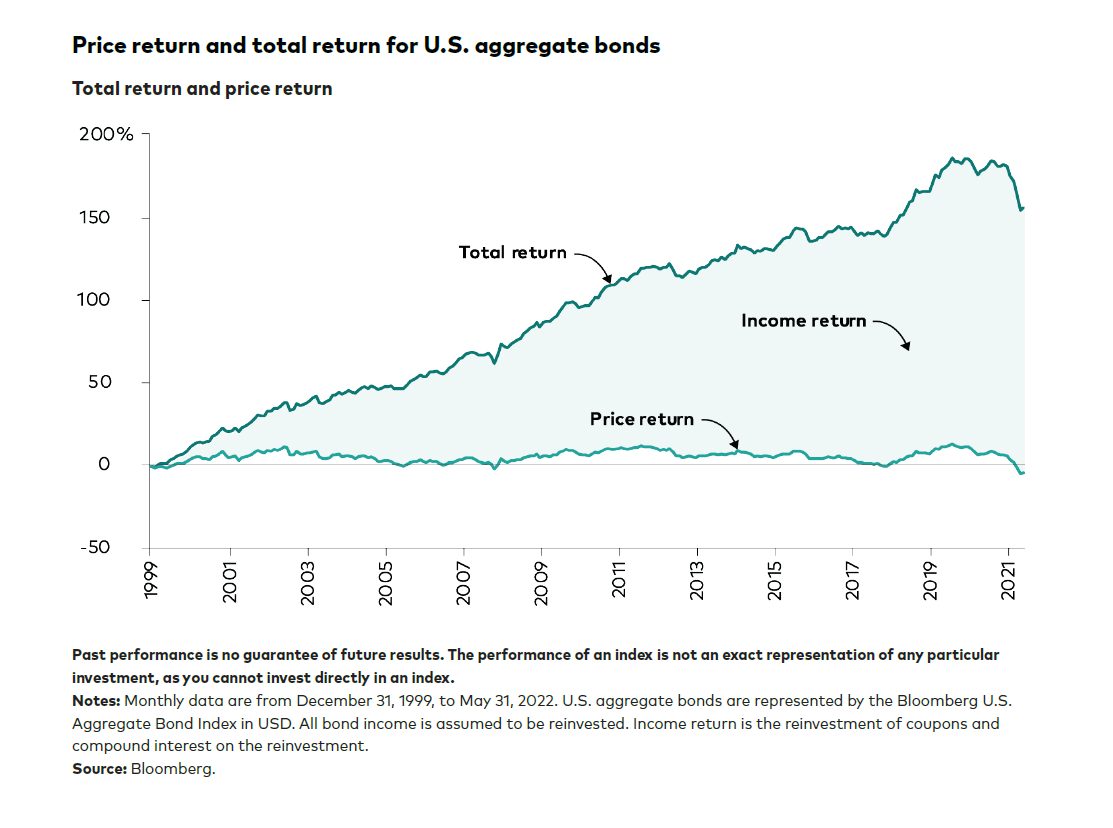 For bond investors, the price return component’s effect on total return decreases as time extends. For stock investors, the price return component of total return is much more significant. “The Lost Decade” is a great example of this: From January 2000 through December 2009, the total annualized return for the S&P 500 was -0.95%, inclusive of the reinvestment of dividends. The negative price returns caused by the bear markets of 2000–2002 and 2007–2009 had an immense impact on long-term returns.

Now take the bond bear market of the 1970s, which was seen as a terrible time to have been invested in bonds as both inflation and interest rates were soaring. But consider this: Long-term bond investors who reinvested their income returns, and remained patient as compounding took hold, nearly doubled their capital from 1976–1983.

Over the longer term, bond total returns are driven much more by reinvestment of interest income and compounding than by price returns. So, as difficult as this can be, try to look beyond the immediate pain of any losses appearing in your quarterly bond portfolio statements and instead focus on the longer-term upside of rising interest rates. 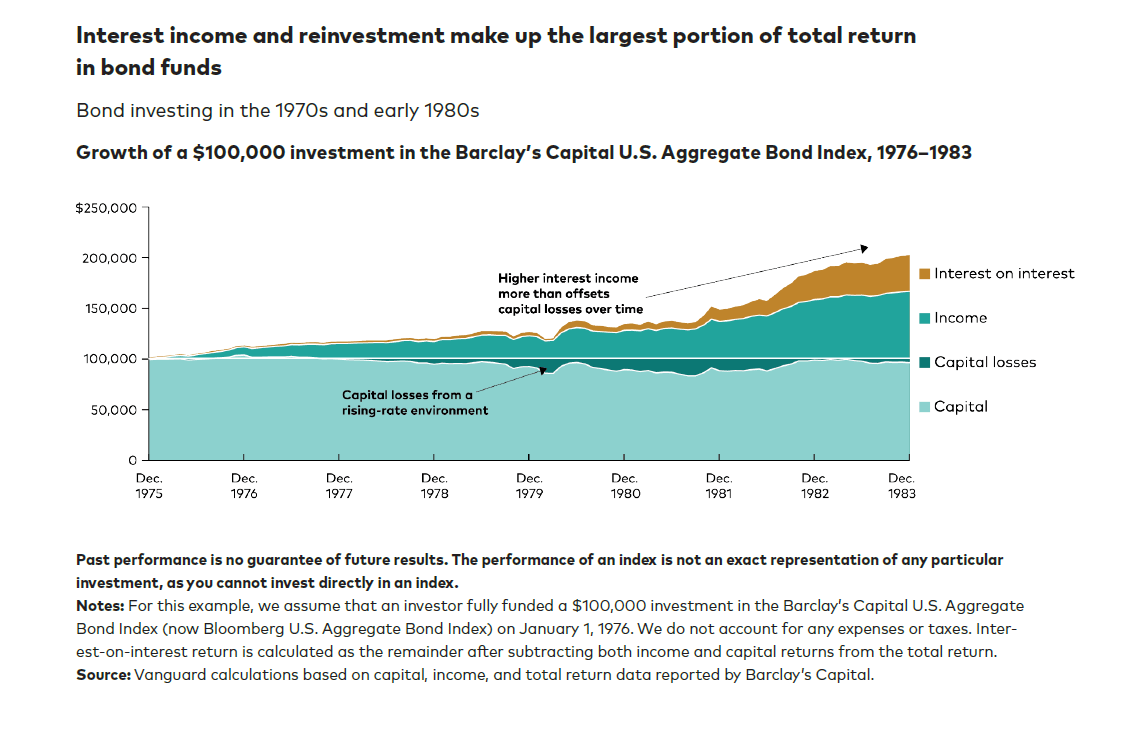 Bond math holds up even during fixed income shocks

Consider short-term Treasuries: interest-rate-sensitive securities whose total returns are extremely sensitive to central bank policy changes. As interest rates on the short end of the Treasury curve have risen due to expectations of further Federal Reserve policy adjustments, so too has the weighted average yield to maturity for funds that invest in these securities. That provides a better foundation to help you weather further rate shocks as starting yields are now much higher.

Even if rates were to rise an additional 200 basis points (bps) from here, you would now recoup any lost principal within a year and then benefit from higher yields moving forward—ultimately increasing the long-term value of your bond portfolios (see chart). 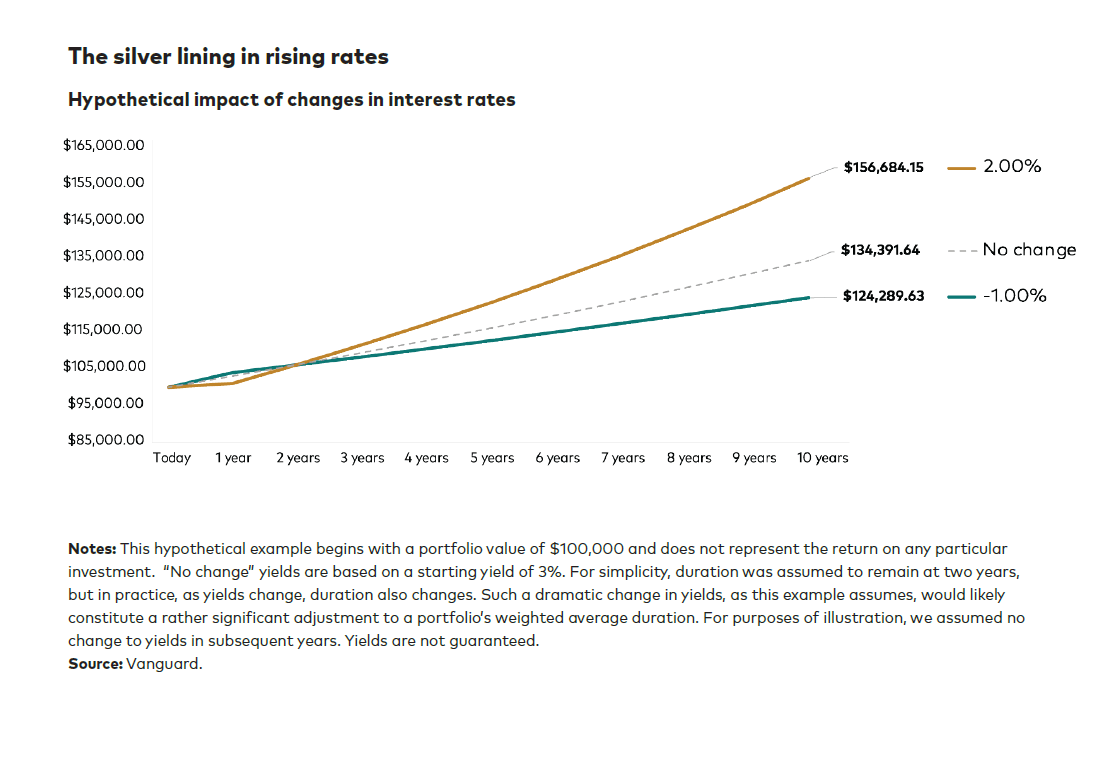 The bond market is experiencing a painful adjustment period of rising interest rates, after a 40-year stretch of declining rates. But, the bottom line is that as rates move higher, bonds are more attractive, not less.