The 2020 Presidential Election and the Market

With the 2020 Presidential Election less than a year away, it’s natural to be concerned about the impact of politics on the stock market and economy. After all, the past three years have been politically turbulent to say the least. Even as we write this, Washington is in the midst of an impeachment hearing. On a short-term basis, headlines and tweets have the power to move markets and create stock market volatility. How should investors react to what may be a bitter presidential campaign?

It goes without saying that as citizens, taxpayers and voters, elections are extremely important – regardless of which side of the aisle you’re on. Elections both reflect and determine the principles we want to uphold and the type of country we want.

However, as investors, politics can often distract us from achieving our long-term financial goals. Government policy can certainly have an impact on economic growth – e.g. around corporate taxes and trade – and can also affect specific stocks, bonds, and sectors. However, for most long-term investors, it makes more sense to focus on economic and market fundamentals rather than day-to-day election coverage.

The relationship between politics and the stock market is not a simple and obvious one. While there may be conventional wisdom about how each political party may affect the economy, these views actually have an abysmal record when it comes to predicting stock market returns. Not only is economic policy difficult to evaluate, implementing and enforcing such policies take time. And even when investor predictions are correct, the market tends to price in these facts well ahead of time.

For instance, what tends to drive markets over the long run are economic trends, especially when it involves innovation. This is perhaps best illustrated by the 1990s: the Clinton era happened to coincide with the tech boom while the dot-com bust coincided with the George W. Bush presidency. It would be a stretch to argue that their presidencies caused the boom and bust, respectively.

Many of the simple statistics that are often used to prove a political point don’t take these factors into account. A basic average of S&P 500 returns during Democratic and Republican presidencies since World War II shows an advantage for Democrats. However, not only are there outliers like the dot-com bust and the 2008 financial crisis that happened to occur during Republican years, but incorporating a lagged effect into the data essentially washes out the difference.

More importantly, even if there is a large difference, it’s clear that returns are positive under both parties. Jumping out of the market due to the outcome of an election means potentially missing out on positive historical average gains.

When it comes down to it, long-term investors should be wary of claims that one candidate or another will “kill the market.” It’s likely that this has been said about every president since the founding of modern stock exchanges. In recent times, it was certainly said about both Presidents Obama and Trump, and is now said about a variety of candidates. To be clear, this doesn’t mean that these candidates have sound economic plans – it simply suggests that markets are hard to predict.

1. There’s no simple relationship between elections and the stock market 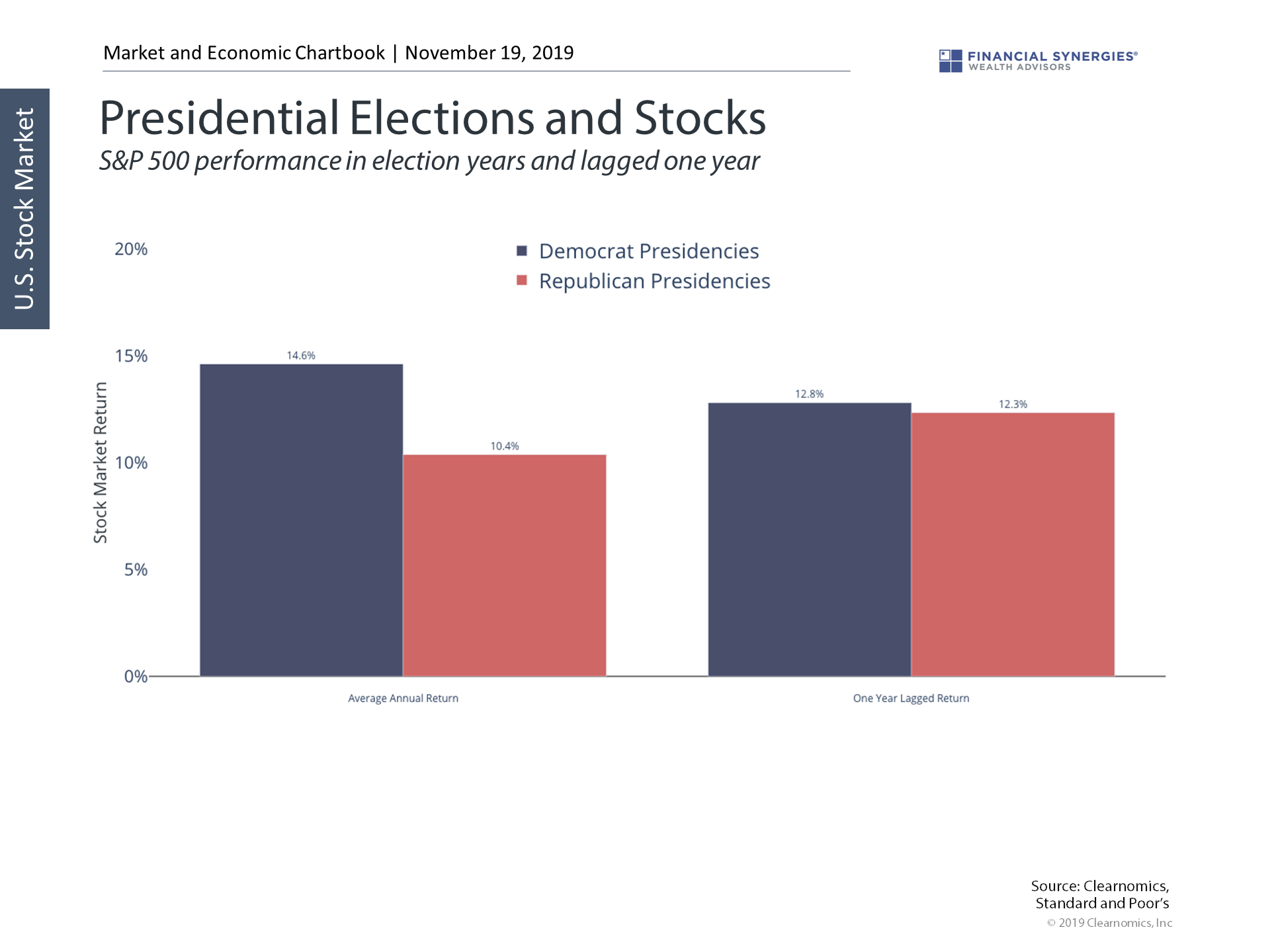 A simple average of stock market returns under Democrats and Republicans shows an advantage for Democrats. However, not only are there outliers including the dot-com bust and the 2008 financial crisis that happened to fall under Republican years (and arguably had nothing to do with which party was in office), but it can take years to fully see the effect of economic policies.

Incorporating a lag into the data shows that there’s hardly any difference in stock returns between the two parties since World War II. More importantly – stock returns are positive on average regardless of presidential party. Thus, making portfolio decisions on the basis of political preference can often result in poor results. 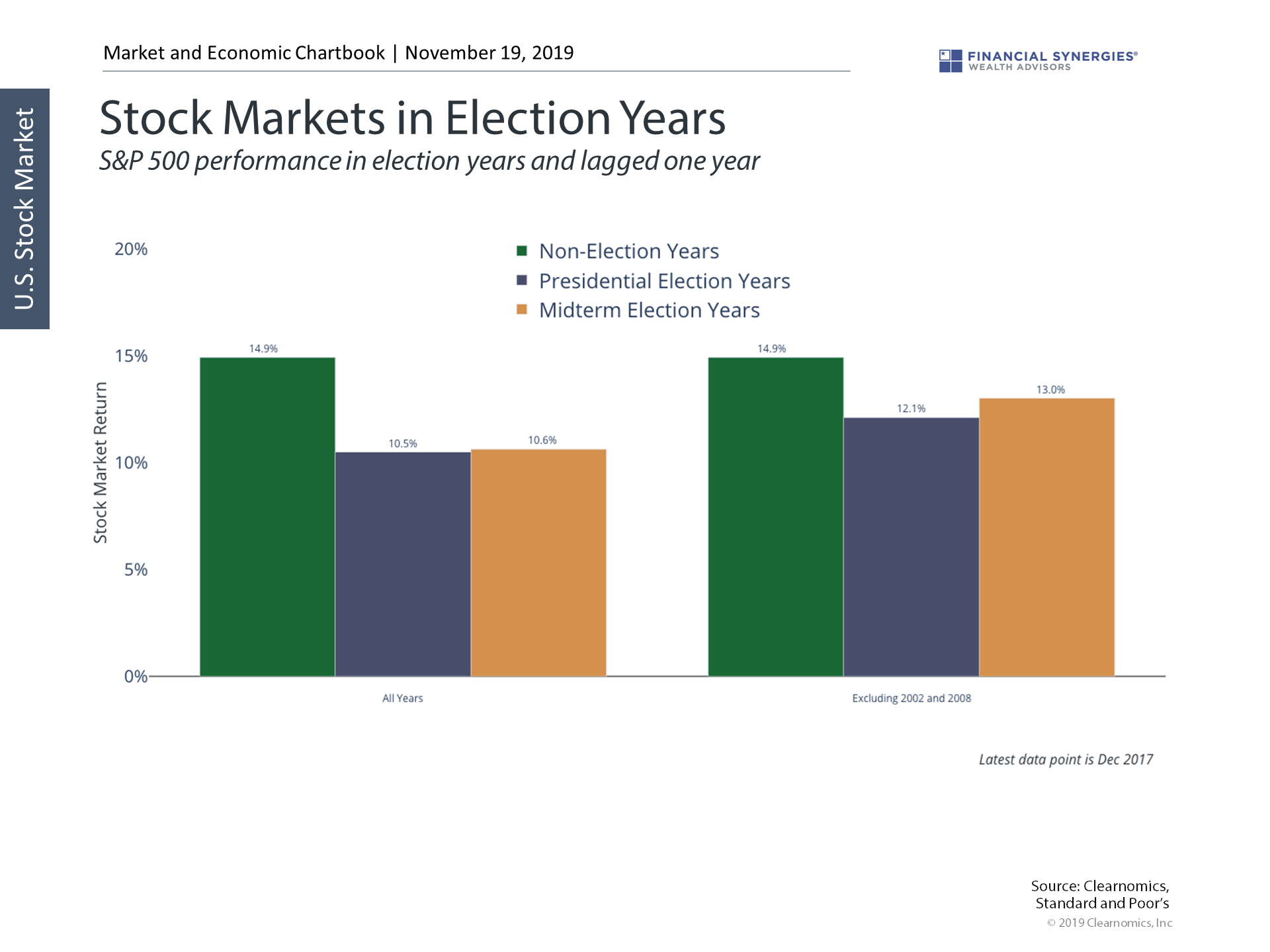 While it does appear to be the case that non-election years tend to have higher returns on average than election years, this difference is small after excluding 2002 and 2008. Additionally, the fact that all years are positive means that avoiding election years is generally not the right approach.

3. In the long run, it’s the economic trends and innovation that matter 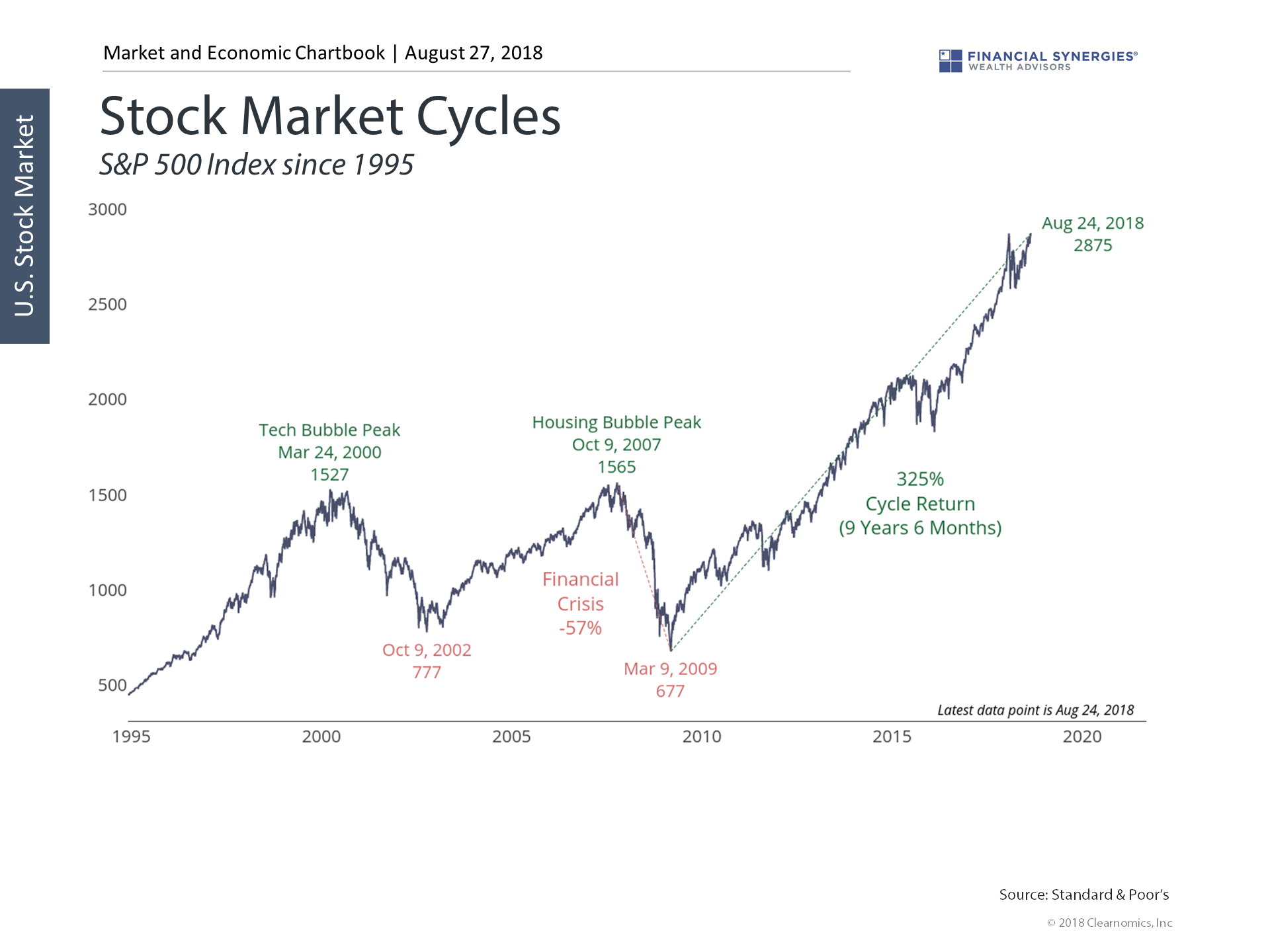 In the long run, it’s economic growth and innovation that matter. There is no simple way to predict stock market returns based on presidential elections. Long-term investors should stay focused and not overreact to day-to-day election coverage.