How the Saudi Oil Disruption Affects Us

Over the weekend, attacks on Saudi Arabia’s oil facilities disrupted 5.7 million barrels per day of production, approximately 5% of the world’s daily output. Oil prices have spiked (+15%) as a result, with the administration authorizing the use of the Strategic Petroleum Reserve and hinting at possible military action. For investors, headlines such as these may naturally spark concern.

There are a few key implications for investors. The first is the direct result of reduced oil production and higher oil prices. In general, higher prices are effectively a tax on everyday Americans and corporations who consume energy. To put this in perspective, energy prices are likely not yet at a level that would justify a significant economic slowdown, although this can change if oil prices continue to rise over time. Even with the price of WTI crude spiking to $60/barrel, this is far lower than the prices above $100 that were prevalent as recently as 2014.

Additionally, higher oil prices will likely benefit the energy sector which has lagged the rest of the market over the past year (this is especially good for Houston’s economy). While the world can draw on sizable oil inventories, additional production will likely come online to make up the difference. How much depends on how quickly Saudi Arabia recovers and how high oil prices rise. In fact, this disruption highlights a key U.S. investment theme popular several years ago: that of U.S. energy independence from domestic sources of oil and gas.

The last factor is the uncertainty this disruption adds to the geopolitical climate. The Fed is due to meet this week and is widely expected to lower interest rates. This comes on the heels of the European Central Bank dropping rates (further into negative territory) and increasing asset purchases (i.e. “quantitative easing”) last week. To the extent that central banks are playing economic whack-a-mole, the disruption in Saudi Arabia and heightened geopolitical tensions increase the likelihood of continued monetary stimulus.

Why does the price of oil matter to all investors, even though few of us spend our days trading oil futures? Simply put, there is no more important basic resource to the global economy. The world consumes around 100 million barrels per day. The energy sector of the S&P 500 has been a driver of returns and earnings over the past several years – both positive and negative. Energy overall makes up nearly 8% of the CPI basket used to calculate inflation. Thus, not only does energy play a big role in the markets and economy, significant changes in oil prices can have ripple effects beyond energy itself.

At the moment, the factors above suggest that events in the middle east create heightened uncertainty for the global economy and markets. From the perspective of long-term investors, events such as these should be monitored but are not a reason to panic or change course. In fact, patient investors should expect these types of geopolitical shocks to take place. This is a key reason for all investors to diversify across asset classes and geographies, regardless of current market headlines.

Here are three charts on this important topic: 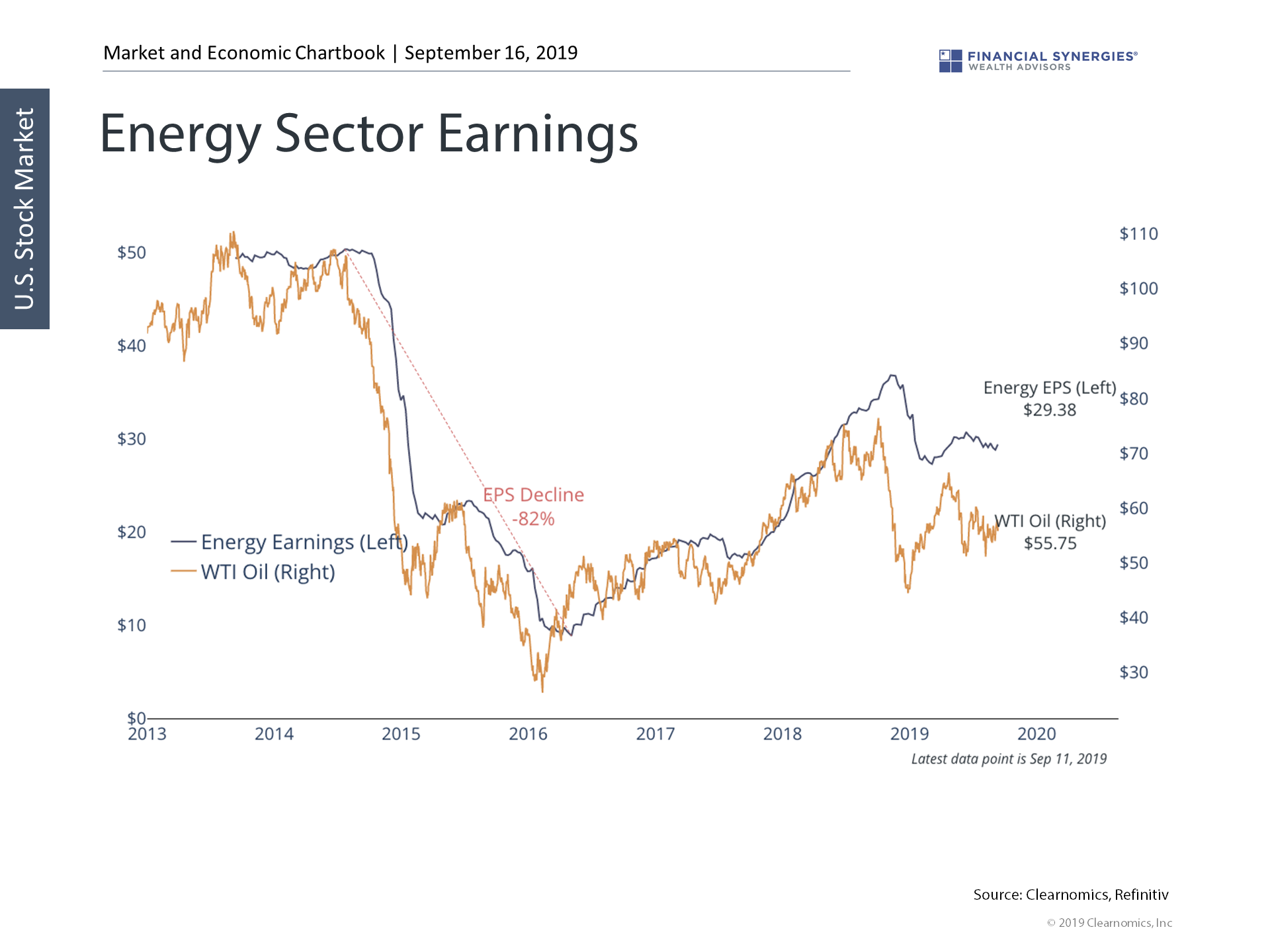 The chart above shows the correlation between oil prices and energy sector earnings. The sharpest decline occurred in late 2014 when the sector’s earnings-per-share declined by over 80%.

The rise in oil prices has had the opposite effect. A sustained increase in oil prices could lift energy sector earnings over time. Whether and how much this occurs depends on a number of factors including how quickly Saudi production is restored.

2. U.S. production has increased dramatically over the past decade 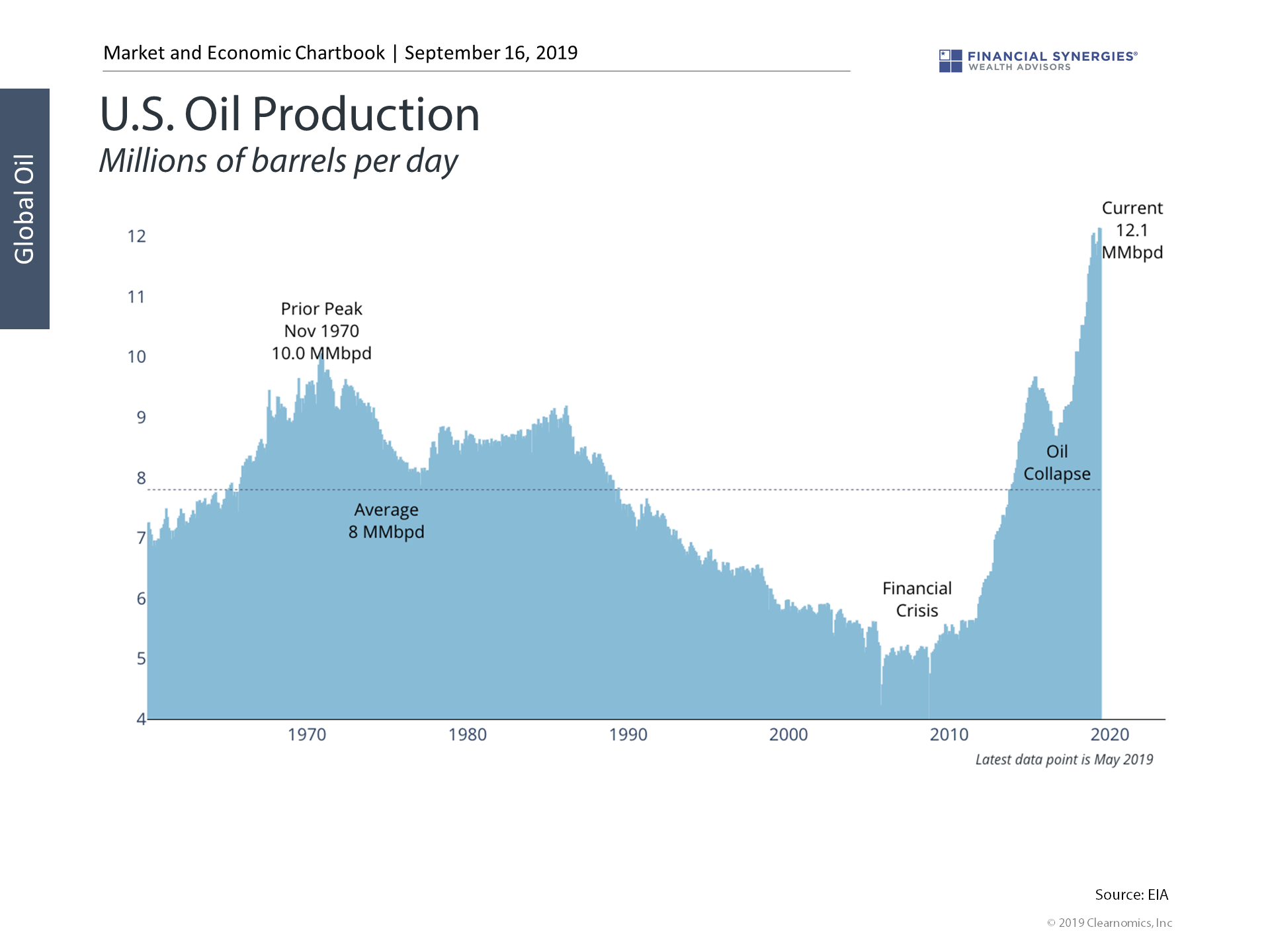 U.S. oil production has increased significantly over the past decade due to advancements in technology and drilling techniques. These include new exploration methods such as seismic detection and production techniques such as hydraulic fracturing and horizontal drilling. As a result, the U.S. is now the largest oil producer in the world. This domestic production may help to soften the blow to reduced Saudi oil for a period.

3. The energy sector has lagged the broader market 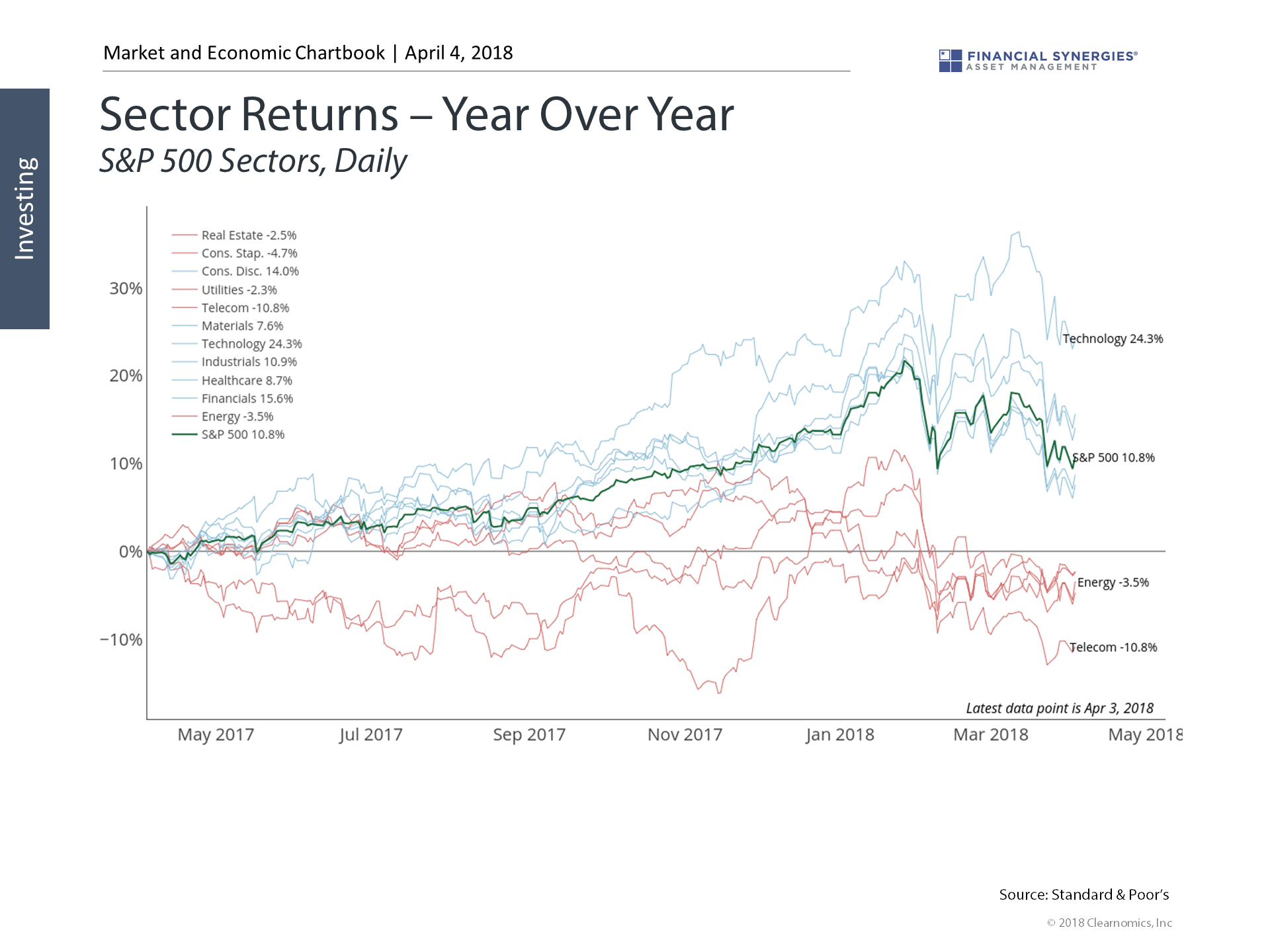 The energy sector has significantly lagged the broader market over the past year. While there are a number of reasons for this trend, higher energy prices could help if they are sustained.

Additionally, central banks are likely to continue to be supportive in response to heightened geopolitical risks. Expectations of monetary stimulus have helped to stabilize the overall market this year.