The Fund with the Odd Name

When first mentioned in client meetings, the Merger Fund sometimes elicits looks of confusion or curiosity from its name alone.  It doesn’t sound like the other names in your portfolio, and it doesn’t act like them either.  It’s considered an alternative type of investment because it doesn’t correlate highly to the more traditional asset classes like stocks and bonds.

The Merger Fund’s strategy is very different from the other asset classes in your portfolio, and it requires a vast amount of skill and experience to execute successfully.  But the process is straightforward and rather easy to explain.

The fund invests in a target company (company being acquired) after a merger/takeover has been publically announced, and they feel that the probability of the deal closing is very high.  The stock price of the targeted company will have already increased in value on the news of the deal, but it won’t reach the deal’s full price potential until it actually closes.  This is where the Merger Fund makes its money – when the deal does close they liquidate their position and walk away with a nice little profit – this is known as an “arbitrage” strategy.

If the deal involves the use of the acquiring company’s stock to purchase the target company, the Merger Fund might short the acquirer’s stock to hedge against a fall in its price.

Their objective is to achieve a return of around 15% per deal.  In determining which deals will actually close, their success rate has been about 98%.

We like the Merger Fund as a complement to our bond portfolio, and also as a risk reducer to the stock funds.  Since the fund’s inception in 1989 through 12/31/2013, it has produced a stellar 6.81% annualized return, outperforming the Barclays Aggregate Bond Index.  It has also been 65% less volatile than stocks (S&P 500) over this period.  And with a very low correlation to stocks and bonds it makes for a perfect portfolio diversifier.

The Merger Fund has also done an excellent job at protecting its shareholders capital in bear markets, as the chart below illustrates: 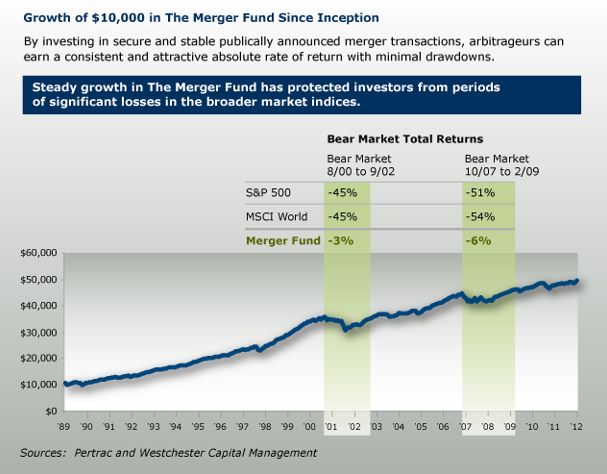 The fund’s risk management techniques and meticulous deal analysis have led to steady, consistent returns over the long-term.  By limiting losses the fund has served its shareholders well. 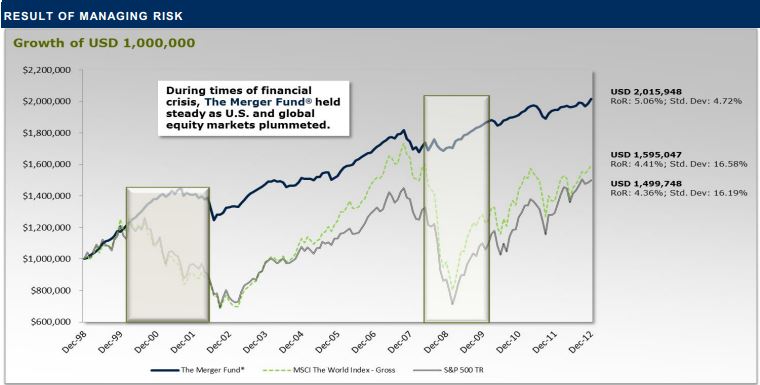 And finally, with further interest rate increases looming, there is concern about the possible negative impact this will have on investors’ bond portfolios.  Merger-arbitrage strategies have historically been positively correlated to interest rates, or the cost of capital; therefore if interest rates rise the Merger Fund could provide a hedge to a reduction in bond values.

At times, observing the movement of the Merger Fund can be like watching paint dry.  But remember, it serves a purpose in the portfolio as a risk reducer and diversifier, and will prove to be valuable over the long-term.