Interest rates have been a conundrum for investors, economists and policymakers over the past ten years. Despite steady U.S. economic growth and an unemployment rate near historic lows, long-term interest rates have remained anchored. Traditional economic models would have predicted rising inflation and interest rates. That this hasn’t occurred is a result of slower global growth and a reversal in Fed policy, among other reasons.

Long-term rates have faced many false-starts and, despite the recent market recovery, rates have declined further. The yield on the 10-year Treasury had risen above 3.2% as recently as last November. It’s now hovering around 2.6%, about the same level that was seen at the start of both 2017 and 2018.

Fortunately, most investors don’t appear to be over-reacting to these dynamics, unlike last year when a flattening yield curve was seen as a sign of an impending recession. The long-term context of these interest rate moves is that they have been declining for almost four decades, resulting in an unprecedented bull market in Treasuries and other bonds. This trend continued over the course of this economic expansion, with the 10-year yield not bottoming until 2016 when it reached around 1.35%.

Two major factors are impacting rates today. First, economic uncertainty and a deceleration in global growth from 2017 have put downward pressure on long-term interest rates. Factors such as trade uncertainty between the U.S. and China have also played a role.

Second, many investors believe that the Fed is likely to pause or even reverse its policy of monetary tightening. The market, via fed funds futures, is expecting less than a 1% chance of a rate hike when the Fed meets this week. It’s expected that the Fed will pause its policy of shrinking its balance sheet in the coming months as well.

This is a double-edged sword for investors. Lower rates mean portfolio income is still difficult to come by – the defining challenge of this economic cycle since 2008. Unfortunately, investors are turning to other sources, such as riskier assets including stocks and high yield debt to generate income.

But on the other hand, declining interest rates have supported fixed income prices somewhat, resulting in even greater portfolio stability. Ultimately, for most investors, this diversification benefit is what will continue to be important in the eleventh year of the market cycle.

1. Long-term rates have pulled back 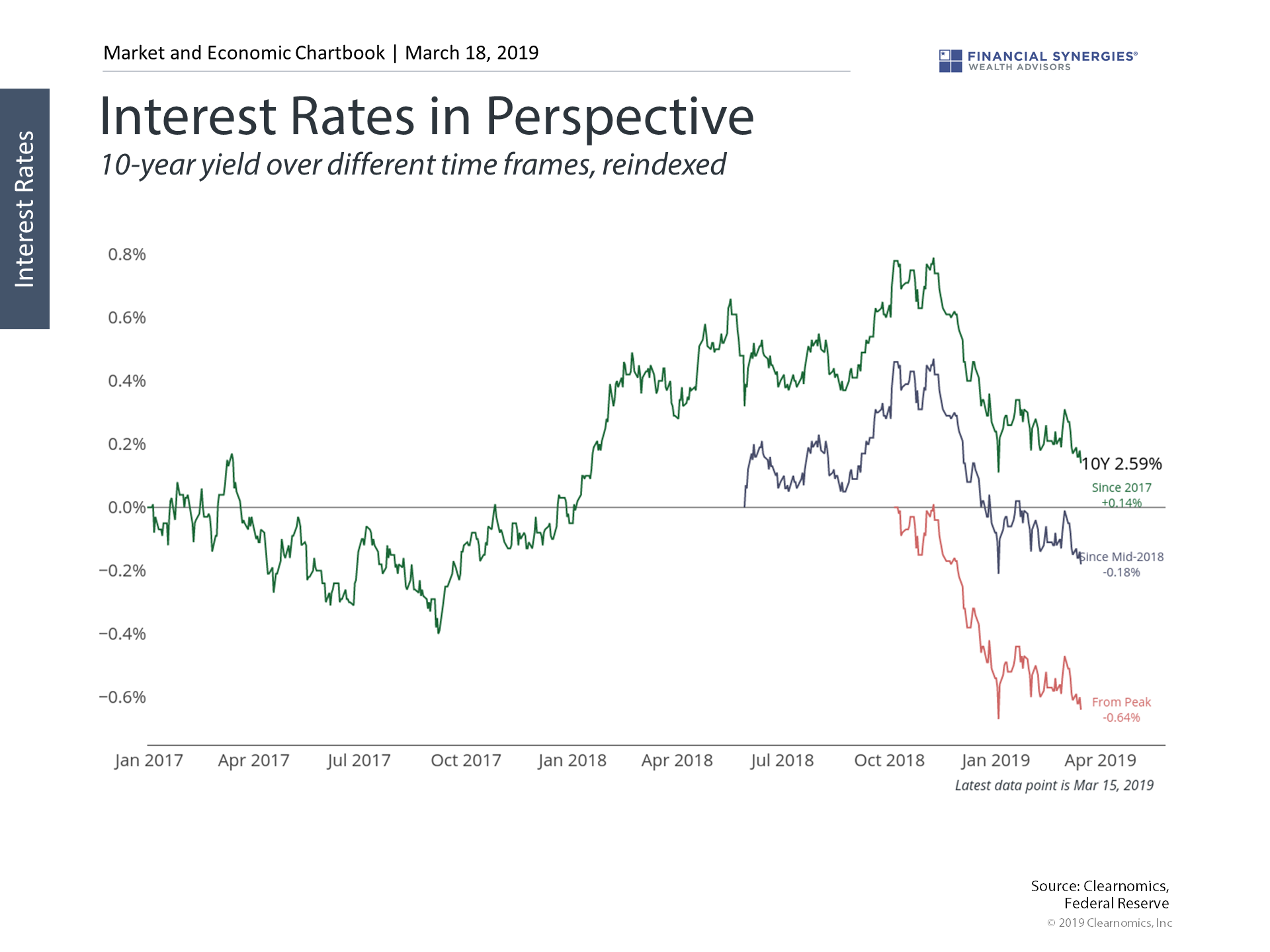 The chart above shows how rates have moved over the past several months, the past year and past two years. Interest rates have fallen from their peaks last year, and are still near levels from the beginning of 2017. There have been many false-starts for rising rates, including the 2013 “taper tantrum” and in late 2016 following the presidential election. Dynamics such as slower global growth and the Fed suggest there could be downward pressure on rates for some time.

2. Other international rates are still low 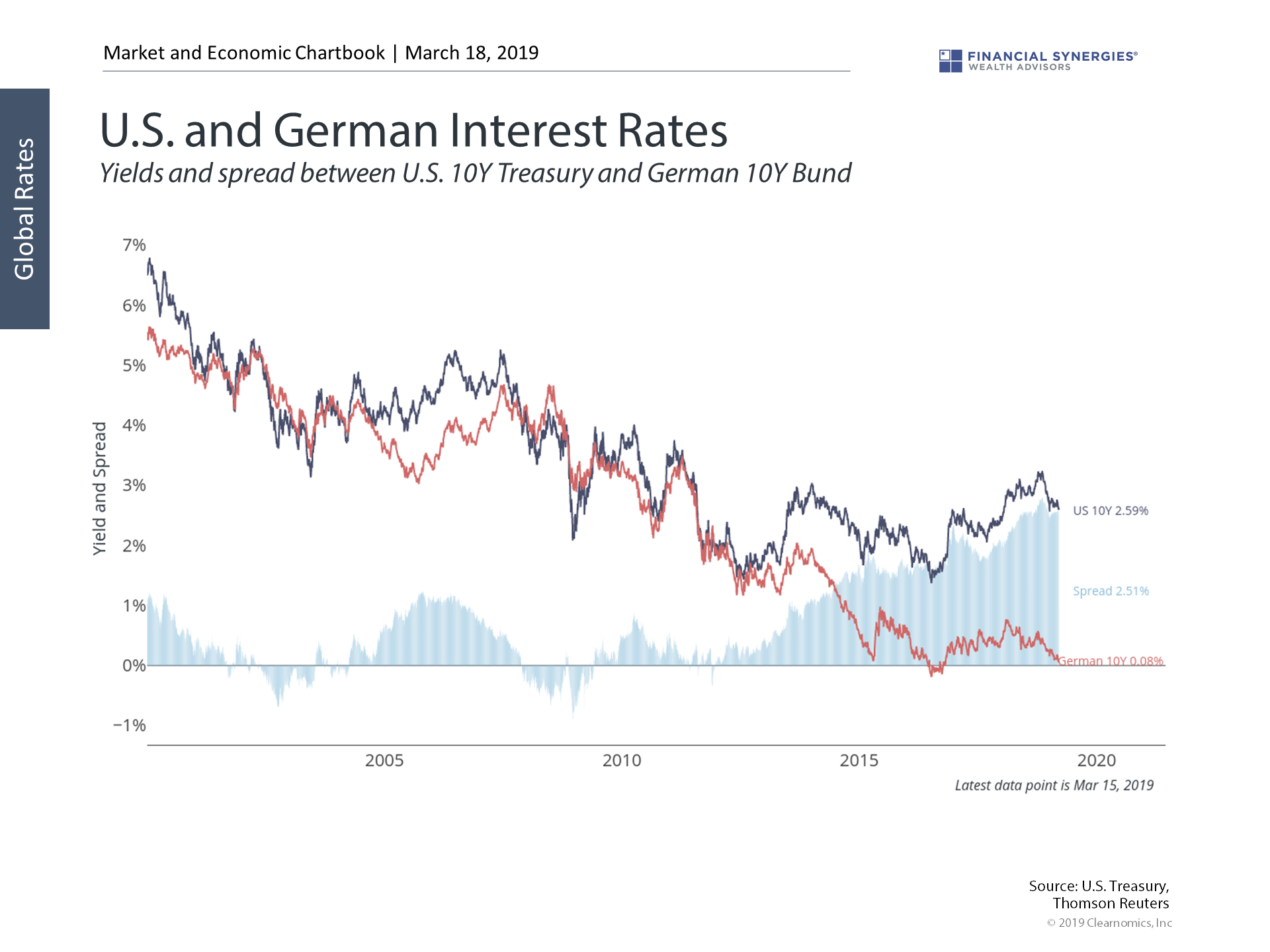 This chart compares the U.S. 10-year Treasury yield to the 10-year yield on German bunds. The spread between the two has continued to widen due to differences in growth trends, monetary policy and events such as Brexit. It’s easy to see from the chart that this spread has moved in both directions in the past.

This is one reason U.S. rates have been low over the past several years. While U.S. interest rates are low by historical standards, they are still much more attractive than most other high-quality sovereign debt. This increases demand for U.S. Treasuries, and since prices and rates move in opposite directions, interest rates have remained low as a result. Unless global growth, and European growth in particular, begins to take off, this pressure on U.S. long-term rates could remain for some time.

3. Short-term rates have risen, but income is still hard to find 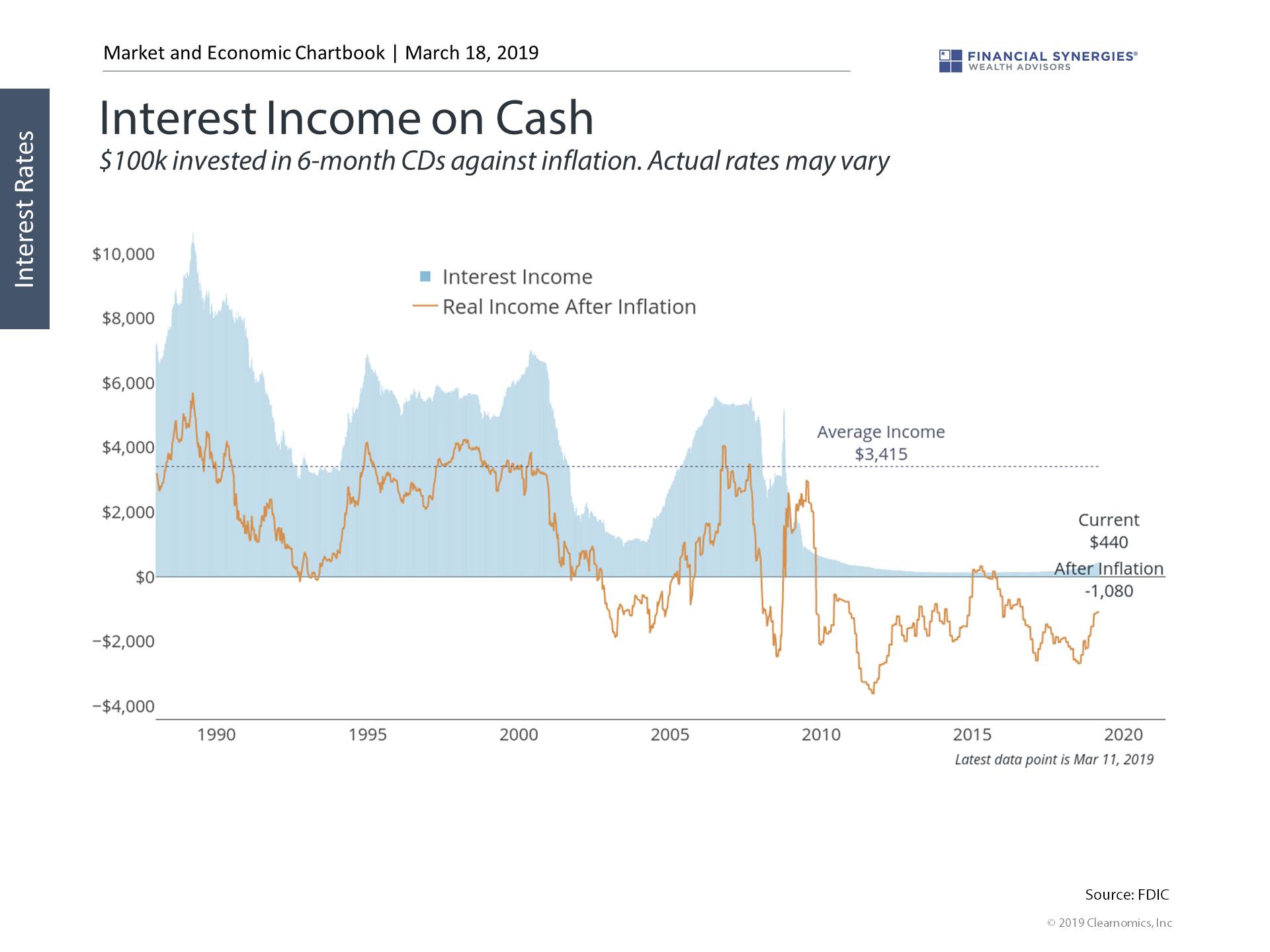 The good news for many investors is that short-term rates have risen faster than long-term ones, primarily due to Fed rate hikes and balance sheet tightening. As a result, the income generated from cash in savings accounts, certificates of deposit, money market funds, and other short-term savings vehicles has increased.

The bad news is that these rates haven’t kept pace with inflation. The average national rate on 6-month CD’s with $100,000 or greater is still only 0.44%. Of course, there are individual vehicles with much higher rates, but this suggests that the average American is still earning little at a time when most consumer prices are rising 2% annually.

Of course, cash serves an important purpose in portfolios, both as a source of income and potentially as a way to reduce volatility. After last year, when it “outperformed” many assets, some investors may have been tempted to move to cash. Over the long run, however, it’s clear that holding cash alone is unsustainable. Not only do markets recover from volatile periods, the yields on cash are still low by historical standards.