What To Make Of Last Week’s Jobs Report

With the markets fluctuating on a day-to-day basis from headlines such as U.S.-China trade and Federal Reserve monetary policy, it’s important to maintain perspective on the overall health of the U.S. economy. After all, in the long run, the economic cycle is perhaps the biggest factor contributing to both stock market and diversified portfolio returns. Investors who understand this fact are better equipped to focus on what matters to their long-term financial goals.

Case in point: last week’s jobs report showed that the economy is still growing at a healthy pace. The unemployment rate is still near historic lows of 3.7% while the under-employment rate ticked up only slightly to 7.2%. The economy added 130,000 net new jobs which, while below expectations, is still a strong pace for job gains. This is because there are over 7.3 million unfilled positions across the country, and wages are still growing at a healthy clip. This suggests that businesses would likely hire more workers if they could find them.

Why does the job market matter? Of course, it matters to us as individuals since many of us have family and friends seeking work or new opportunities. Many investors may also be business owners or managers with hiring and compensation decisions.

But just as importantly, the job market is a gauge of the health of the overall economy which impacts all investor portfolios. In the eleventh year of this record-breaking bull market, keeping an eye on the labor market is more important than ever, especially in a period of heightened global concerns.

So, while the data suggest that the economy is still healthy, after ten years of economic expansion, it’s not unusual for the economy to slow down. Thus, while there are still attractive opportunities in the market, it’s more important than ever for investors to stay balanced in their portfolios, despite the daily global headlines.

1. Unemployment is still near historic lows 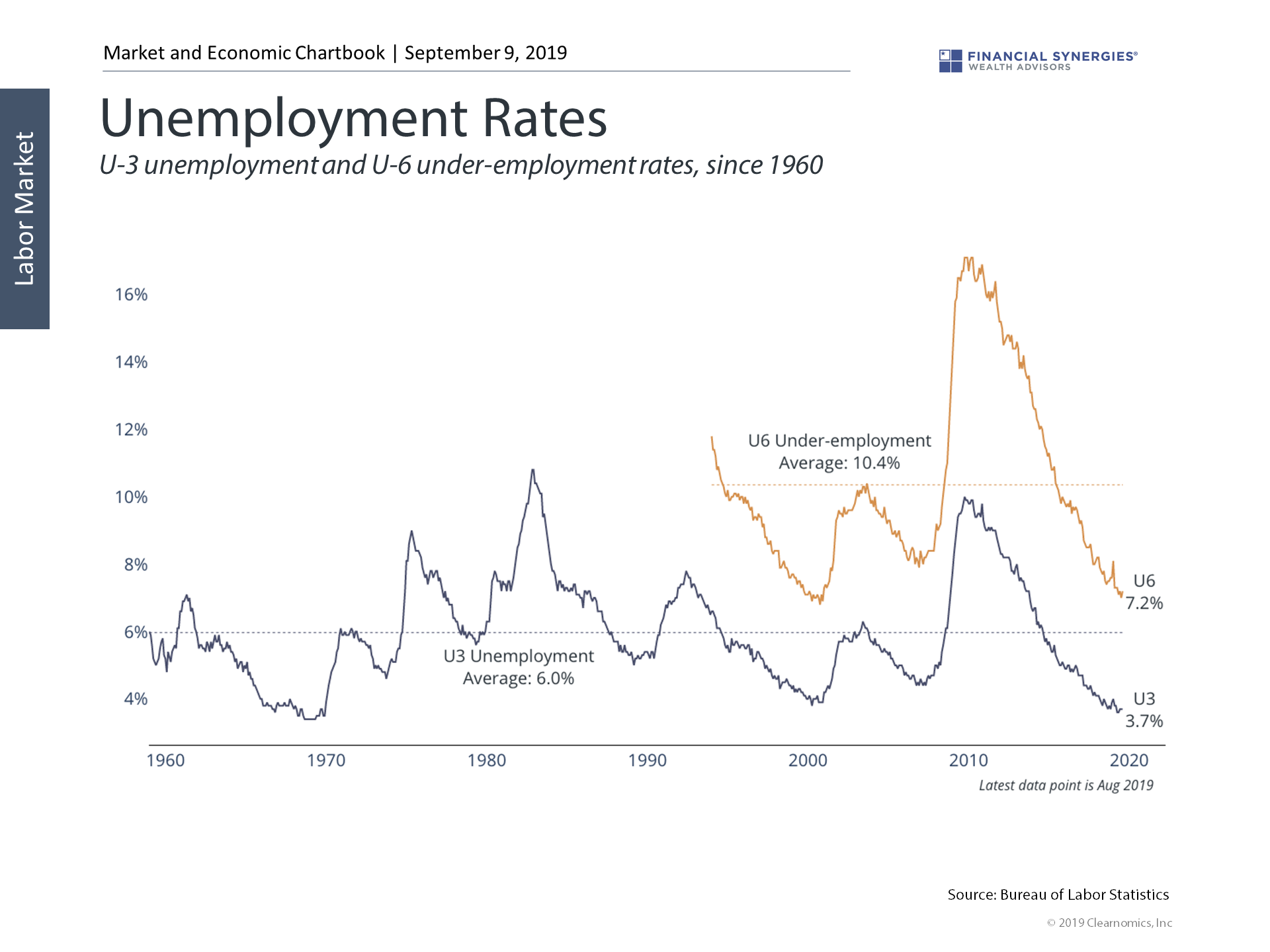 The unemployment rate held steady at 3.7% in August, the lowest level in decades, going back to the 1970’s. During the housing boom of the mid-2000’s, unemployment reached only as low as 4.4%. This suggests that the labor market is still strong – a positive sign for the U.S. economy.

What made the jobs numbers difficult to interpret after 2008 was the fact that many workers faced difficulties in the aftermath of the financial crisis. Some were forced to take part-time work while many others dropped out of the labor force altogether. However, the so-called under-employment rate, labeled U6 on the chart above, takes this into account. Even that rate has fallen dramatically in the past nine years and is still near its lowest level since 2001.

2. Job gains continue to be strong

The economy created 130,000 jobs last month, adding to a total of over 21 million net new jobs created since the financial crisis. This also adds to the 7.3 million job openings that are still unfilled across the country. The fact that companies have unmet demand suggests that they are either expanding for future growth or they are having difficulty finding qualified workers. Either way, it suggests that the economy is healthy. 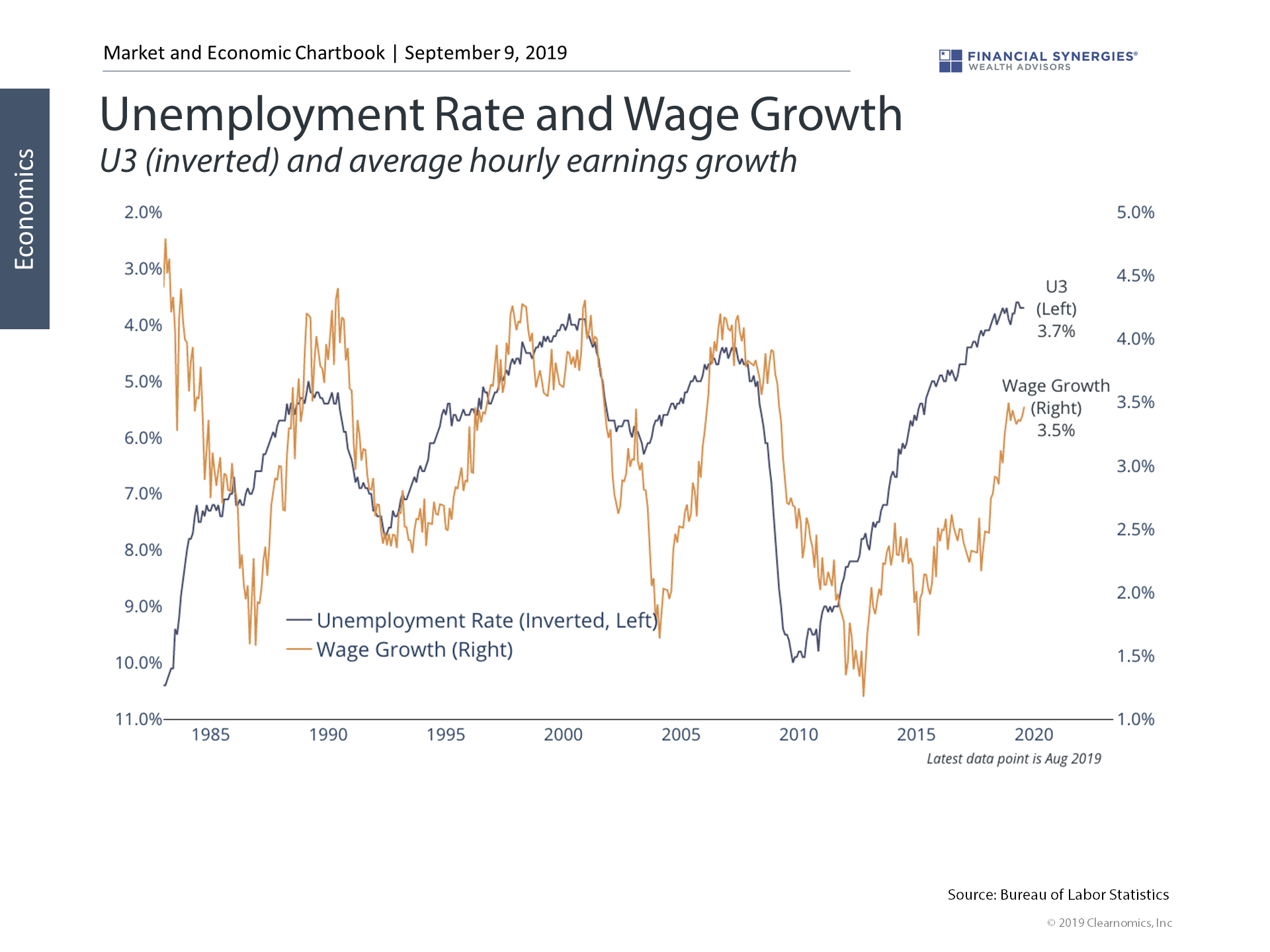 Wages for many workers continue to grow faster than overall inflation, a positive sign for consumers and the economy as a whole. In fact, wage growth has accelerated over the past two years.

What’s the bottom line? Long-term investors should continue to focus on the economic fundamentals. Recent labor market data suggest that the economy is still healthy, even if it is slowing down after ten years.