What the Spike in Energy Means for You

While the humanitarian impact of Russia’s invasion of Ukraine is the top concern, investors also continue to face a challenging market environment as the conflict intensifies.

Not only are geopolitical lines being redrawn in the region, but escalating sanctions and Russia’s ban from SWIFT, a system for global money transfer, are raising questions for global financial stability. But perhaps the most immediate global impact of this conflict is on energy prices. Oil prices have spiked in recent days to their highest levels since 2014, with Brent crude above $120 per barrel. What implications might this have for investors and everyday consumers in the months to come?

The challenges created by the Russia/Ukraine conflict only add to storylines of the past two years. During the initial stages of the pandemic lockdown, the front-month oil contract fell into negative territory. This had never occurred in history and was due to a lack of oil storage capacity driven by the collapse in demand. In other words, contract holders were so desperate to offload their oil that they were willing to pay others to take this otherwise valuable commodity.

The world has changed significantly since then. Over the past two years, oil prices have recovered alongside the economy, with a few bumps due to growth concerns and COVID-19 variants. As a result, rising energy prices have been a major contributor to rising inflation. Last month’s Consumer Price Index report, for instance, showed that energy prices rose 27% over the previous year and gasoline prices skyrocketed 40%.

From an economic perspective, energy affects everything. The world is still primarily driven by fossil fuels despite an increased focus on renewables among investors. The International Energy Agency (IEA) estimates that global oil demand will reach 100.6 million barrels per day this year, surpassing its pre-pandemic level.

Of course, where this oil is produced has changed over the past decade due to the so-called U.S. energy renaissance. Still, OPEC+, which includes Russia, are important suppliers of both oil and natural gas, especially to Europe. To combat higher energy prices, especially at the pump, the U.S. administration is expected to release oil from the Strategic Petroleum Reserve, and it’s possible that supply from Iran could come back to the market pending nuclear talks.

While the dynamics of the oil and gas markets can be complex, there are a few simple ways in which energy prices affect investors. First, rising energy prices could continue to support higher inflation rates for some time. This hurts consumer pocketbooks and reduces discretionary income, effectively functioning as a tax. For businesses, higher energy prices can boost the cost of products and services directly and indirectly. Gasoline, for instance, has risen from a nationwide average of around $1.75 a gallon in early 2020 to over $3.49 today.

Second, the energy sector of the stock market has benefited from the oil price recovery of the past two years. Energy stocks have done well with the S&P 500 energy sector rising 23.4% year-to-date and 41.5% over the past year. It is the only sector in the black this year and has far outpaced all other groups over the past twelve months.

However, for those who are properly diversified, the energy sector accounts for just under 3.5% of the S&P 500’s market capitalization. The fact that the sector has made these gains emphasizes the importance of investing within and across markets.

This is a significant shift from the areas that performed well during the initial economic reopening, i.e., technology and growth stocks. This underscores the fact that it’s difficult to know what may or may not outperform in any given year, especially once a sector falls out of favor, and thus it’s important to be broadly diversified.

Third, higher inflation and prices could act somewhat as a drag on the overall economy. However, growth is expected to slow anyway from its feverish reopening pace. While rises and collapses in oil prices have been correlated with bull and bear markets, this has more to do with their common connection to the economy. When growth is strong, oil prices tend to rise as does the stock market. Thus, focusing on the underlying fundamental trends is ultimately more important when considering market performance over the course of years and decades.

The next several months will be challenging for investors as the conflict in Ukraine plays out. But we’re always faced with potential problems whether it’s trade wars, the pandemic, lofty valuations, rising interest rates, geopolitical conflicts, or other issues.

Clearly understanding the key issues while resisting the urge to overreact is still the best approach to achieving long-term financial success. Below are three charts that help provide perspective on global energy prices. 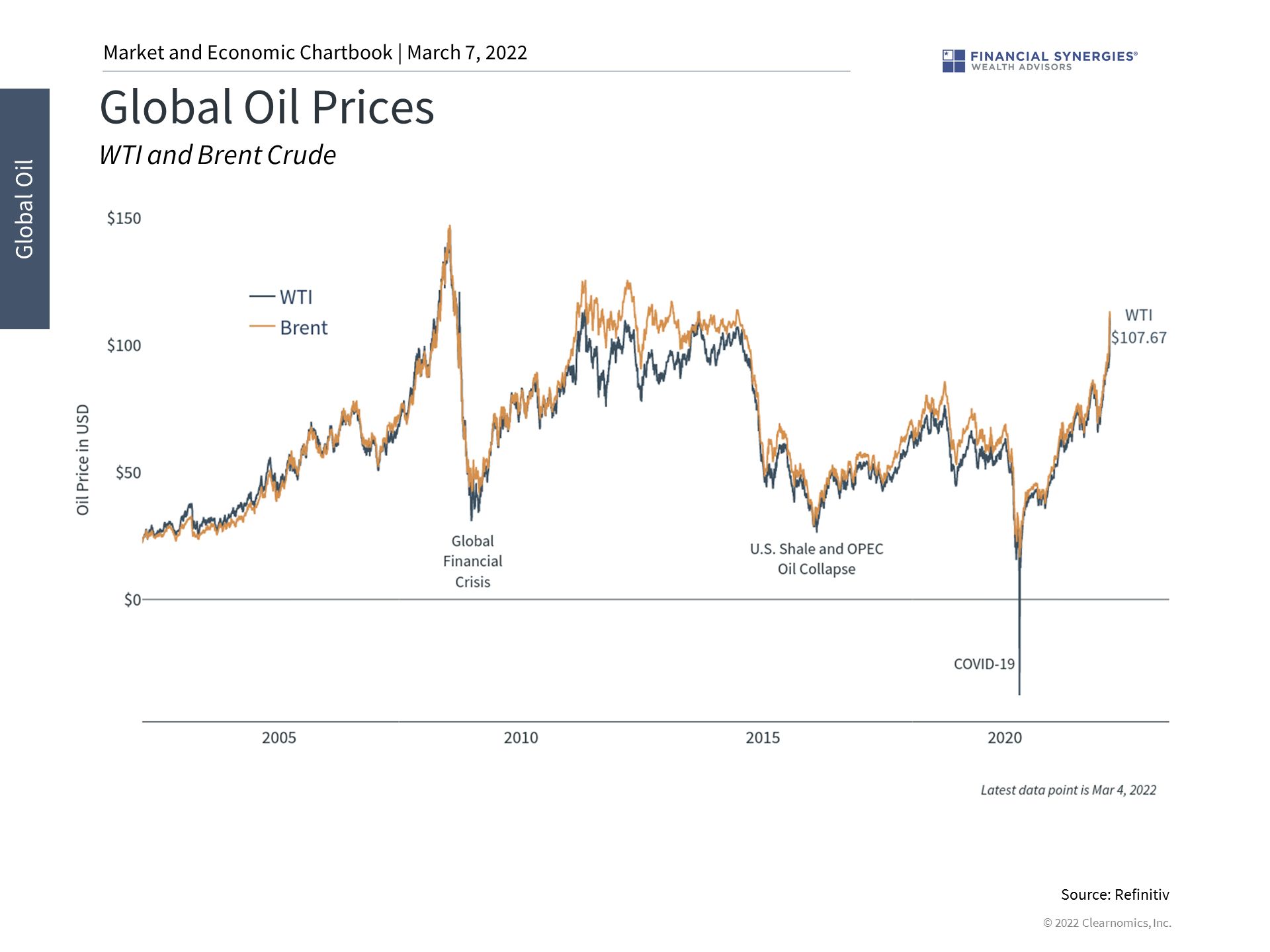 Oil prices have jumped as the Russia/Ukraine conflict intensifies. Brent crude has surpassed $120/barrel, the highest level since 2014. However, oil prices have been rising steadily over the past two years and many expected oil prices to reach these levels in 2022 regardless of geopolitics. 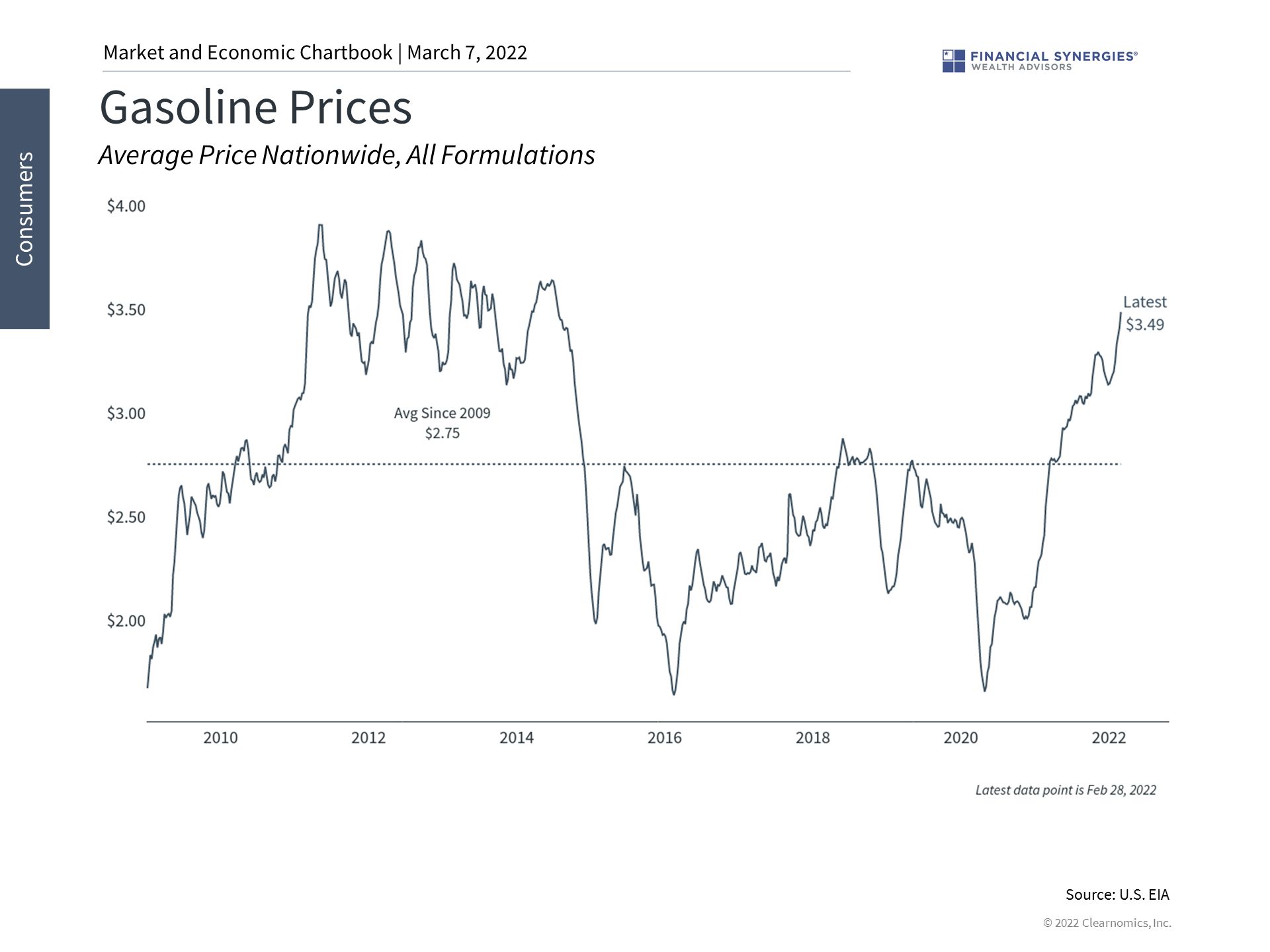 Perhaps the most direct impact of rising energy prices is at the pump. Consumers have experienced a near-doubling of gasoline prices since 2020, alongside other factors driving inflation. Higher gas prices serve as a tax on consumers and act as a drag on the economy.

3. The energy sector has outperformed over the past 12 months 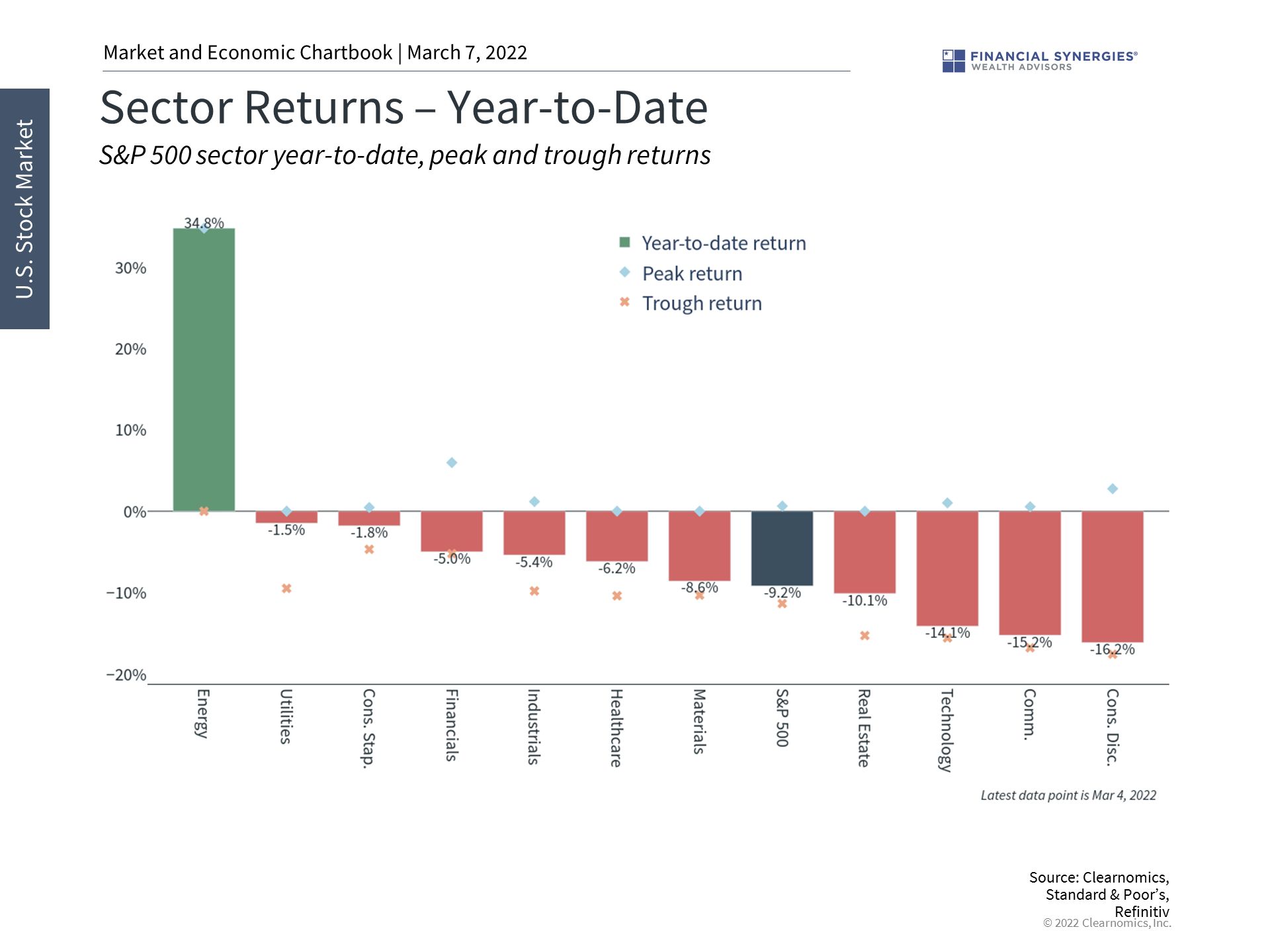 The energy sector has rebounded strongly this year and over the past twelve months. This underscores the need to stay diversified across sectors since leadership within the market can shift unexpectedly.

Energy is a volatile sector, and we’re being reminded of that daily. It represents a small slice of overall market capitalization, although it can feel like it dominates when you’re price at the gas pump doubles! For now, the war in Ukraine will most likely foster further tumult in energy and commodities.