What a Slowdown in Manufacturing Means

A few weeks into 2020 and stock market volatility and global uncertainty have picked up steam. Geopolitical tensions with Iran are yet another source of investor concern, especially in the short run. This is nothing new of course – it just may feel especially pronounced to investors after the relative calm of the last several months.

Over the past ten years there have been countless geopolitical events which rattled markets for weeks or months. These include nuclear threats out of North Korea, Russia’s annexation of Crimea, and instability in parts of Latin America including Venezuela, Argentina and Chile. Despite strong stock market returns, none of these issues have truly been resolved.

Thus, in the long run, markets can stabilize if the economy and fundamentals are strong. This is why the most important new data for the economy and markets recently was the ISM Manufacturing Index which fell to its lowest level since June 2009. The index shows that U.S. manufacturing activity began to contract last August and has only worsened since. With greater uncertainty in the world, what this signals for the U.S. economy will increasingly matter to investors.

Much of the manufacturing decline is the result of the U.S.-China trade war and its follow-on consequences. The tariffs imposed last year by both sides reduced U.S. manufacturing demand and shifted production to other countries. Now that an interim “phase one” trade deal has been agreed upon, manufacturing activity could recover but perhaps only slowly.

While manufacturing only makes up about one-tenth of the U.S. economy, this decline is also indicative of a larger deceleration. Non-manufacturing activity is still expanding, but at a slower pace, as shown by the ISM Non-Manufacturing index below. Other data, including the index of Leading Economic Indicators, also suggest that the economy has decelerated significantly.

The point for investors is that while the economy is still generally healthy, economic growth has been slowing for some time. After all, we are nearing the eleventh anniversary of this historic business cycle, and it’s unrealistic to expect an aging expansion to grow at the same breakneck pace forever.

At the moment, investors are hoping that factors such as a trade deal will help speed up economic growth globally – a return to the “global coordinated growth” experienced in 2017. While this is possible if uncertainty lifts, long-term investors should remain diversified and set proper expectations for both the economy and stock market returns.

Below are three charts that put underlying growth trends in perspective. 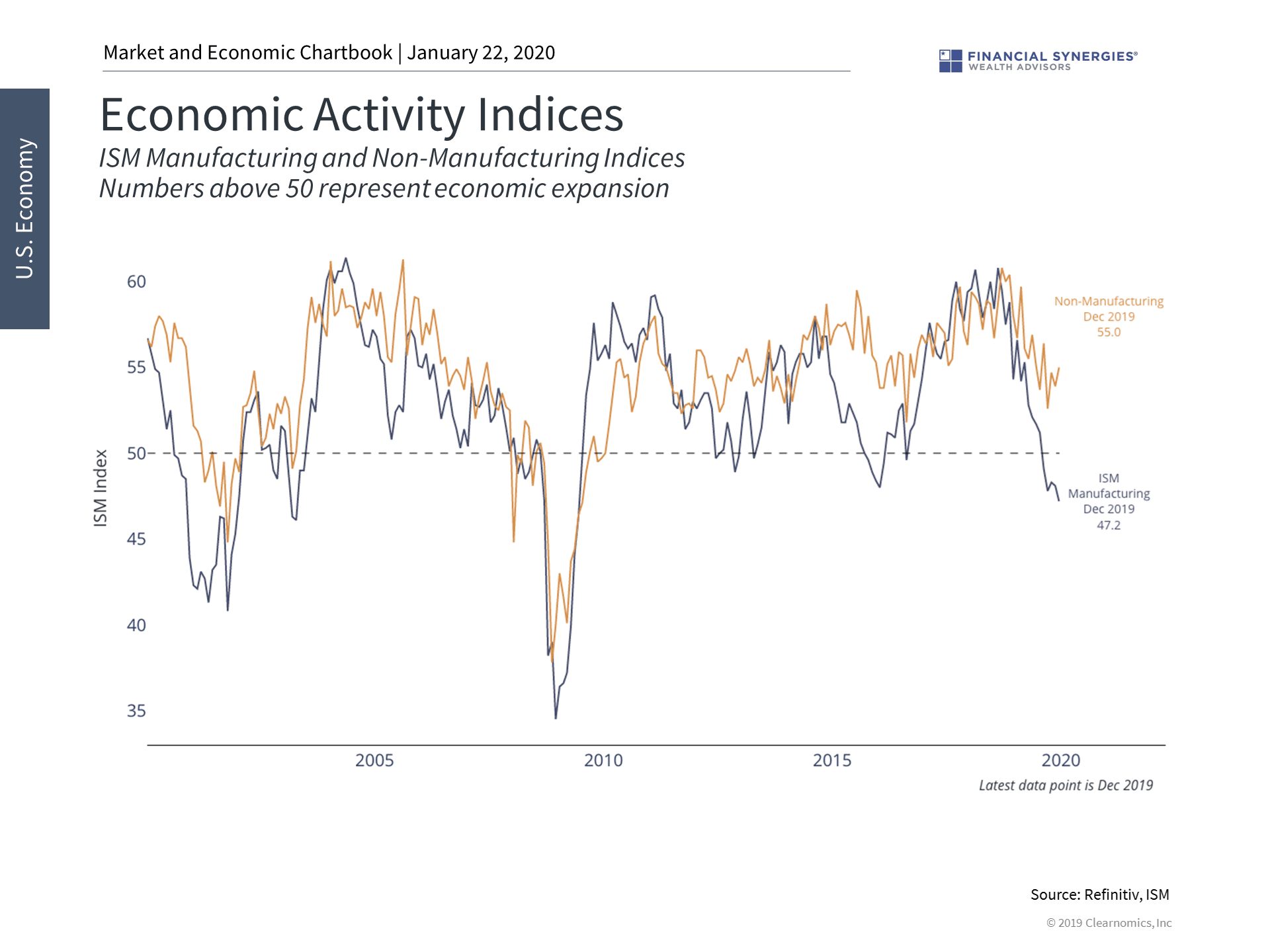 2. The overall economy is also growing at a slower pace 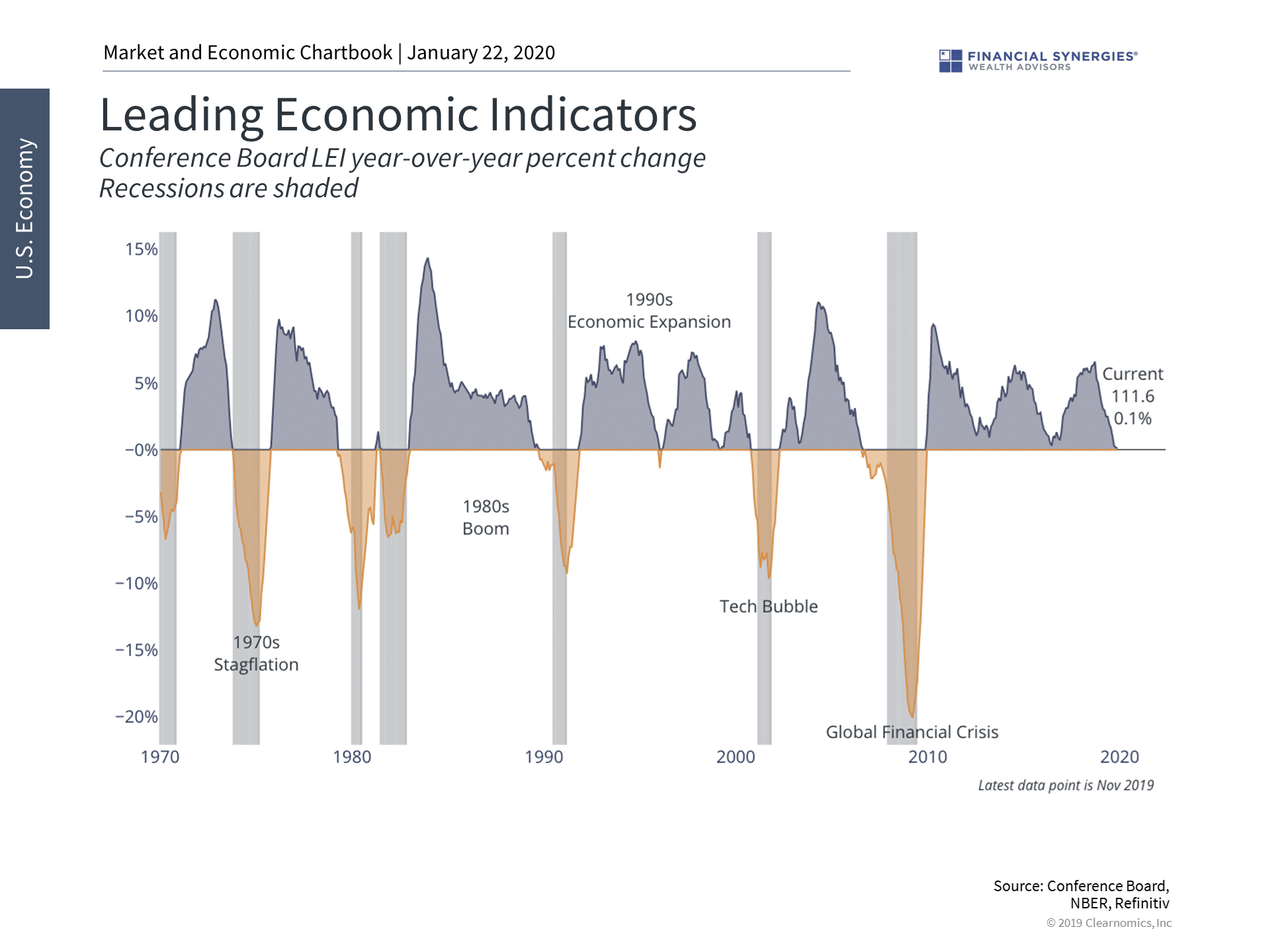 The Conference Board’s index of Leading Economic Indicators show that the economy has decelerated significantly over the past two years. There have been two other similar periods over the course of this cycle.

3. Factors such as the dollar may help growth 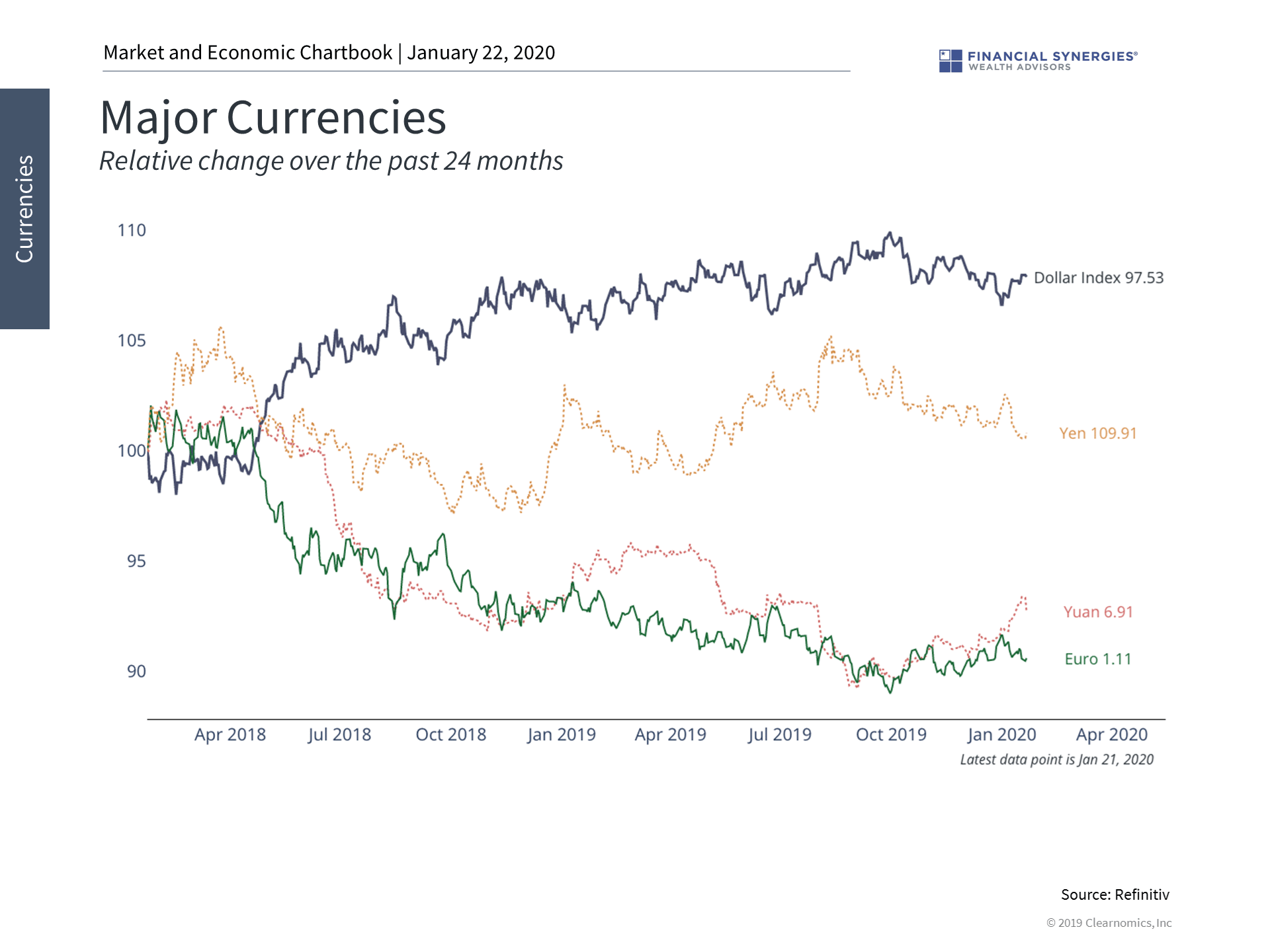 There are many factors which may affect future growth, such as the U.S. dollar. A strong dollar tends to hurt growth because it reduces the competitiveness of our exports. The dollar has been strong for quite some time due to the overall stability of the U.S. economy. With other regions stabilizing, a slightly weaker dollar may help the economy.