Trade Headlines Can Be Misleading

It’s no secret that U.S.-China trade talks have dominated market headlines in 2019. Escalating tariffs on both sides of the Pacific and the possibility of an extended trade war have led to swings in the stock market all year long. Investors focused on these day-to-day headlines might be led to believe that the stock market is stuck in neutral until these issues are resolved.

Nothing could be further from the truth. Not only have major U.S. indices reached new record highs this year, but international markets have rebounded as well. While there are real risks if the world’s two largest economies can’t reach a trade agreement, the reality is that these headlines have only resulted in short-term volatility so far. This is especially the case when tariff deadlines are looming – many of which have already come and gone this year.

Another such deadline is December 15 when new tariffs are scheduled to be imposed – specifically, 15% tariffs on $160 billion of Chinese goods. This would impact a wider array of consumer goods and thus have a larger impact on U.S. consumer spending. However, both the White House and Chinese government officials have expressed optimism on reaching a deal and avoiding this round of tariffs, to which the stock market has reacted positively.

Regardless of what happens over the next few weeks, market strategists and economists will continue to argue over global growth forecasts in 2020 and the impact from trade. But one thing is certain – investors who focus too much on day-to-day headlines and short-term market swings may lose sight of the bigger picture. Patient, long-term investors know that the stock market can pull back swiftly in a short period of time. The deepest of these was 7% for the S&P 500 earlier this year, and on average the market can fall over 14% in any given year. This is normal for markets whether there are worrisome headlines or not.

It’s still likely that a trade agreement is ultimately reached. Whether this takes a week or a year is unclear, and lingering issues around intellectual property and tariffs on specific goods will remain. The point is not that the market will rise indefinitely – it certainly won’t – it’s that predicting what markets will do, even when confronted with big global headlines, is difficult.

1. Despite large swings due to trade headlines, the stock market reached new record highs in 2019 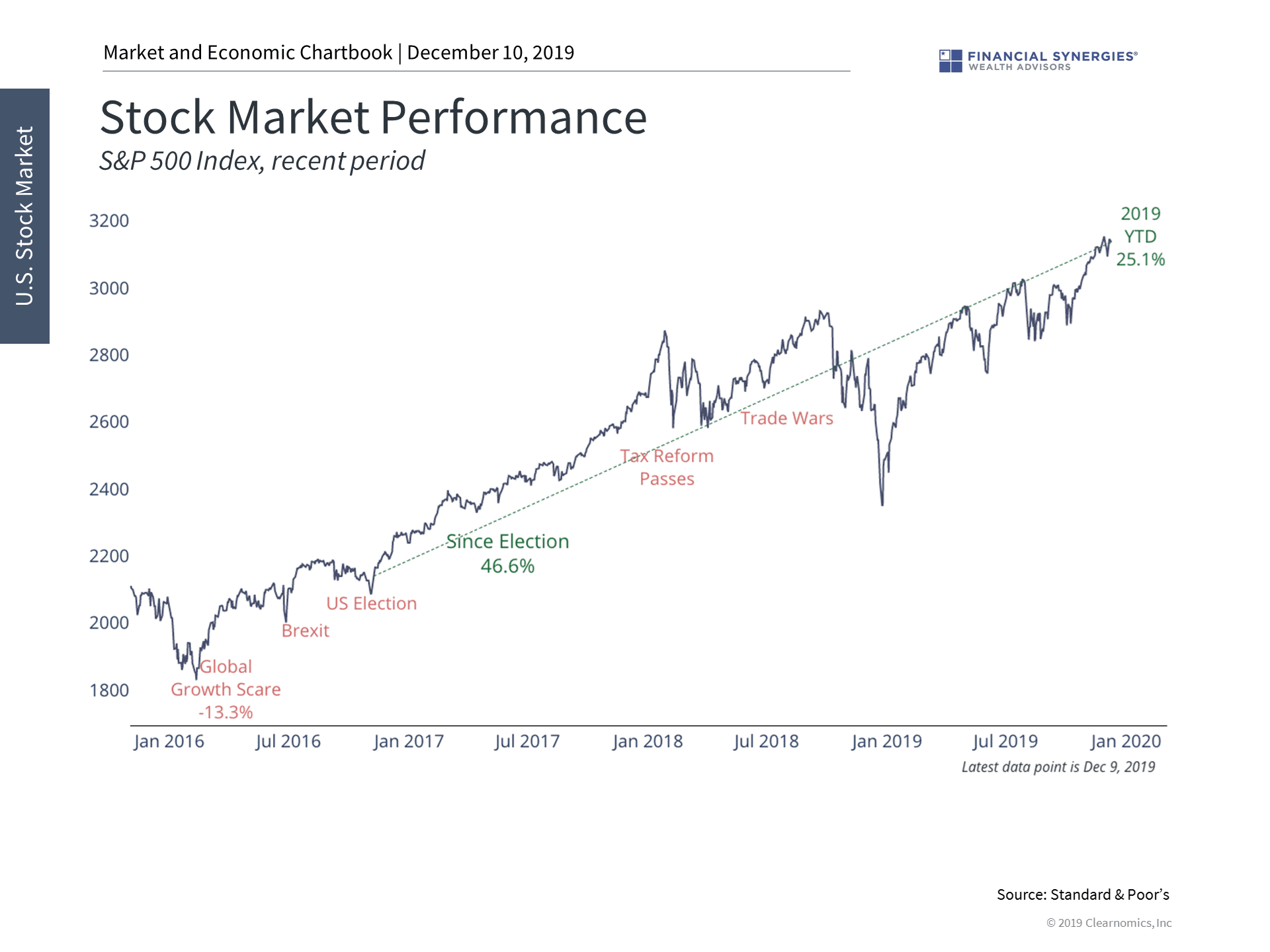 The stock market has seen increased volatility over the past twelve months. Not only did the market nearly fall into bear market territory a year ago, but also faced large swings in May, July and October. Despite the negative headlines around trade, the stock market continued to make new highs.

2. Trade will continue to be a focus for this administration 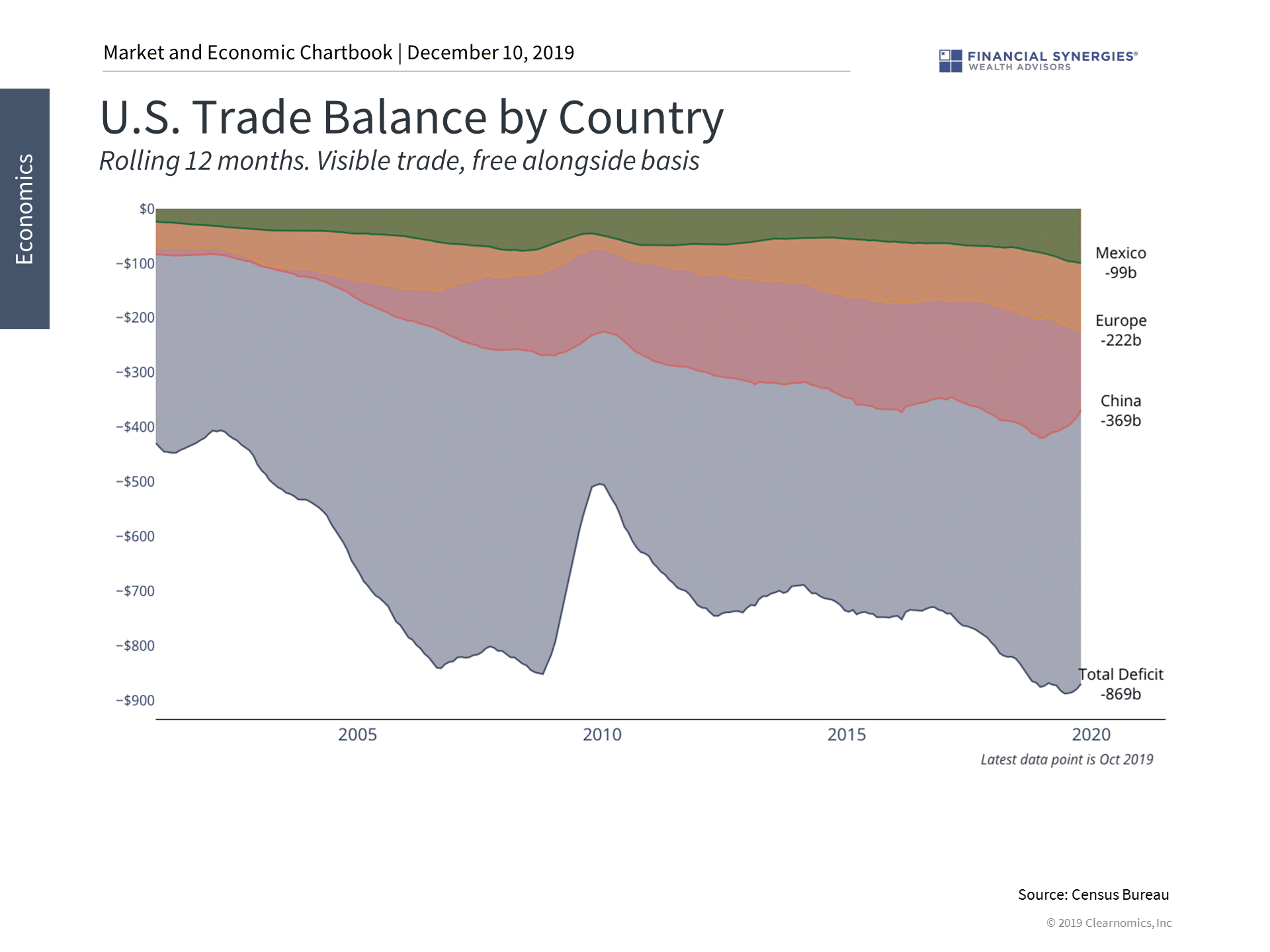 Regardless of whether a deal is reached with China before December 15 or sometime next year, this will continue to be a central issue for the administration. The White House has made it clear that they view international trade as a zero-sum game – i.e. a trade deficit means we are “losing.” With deficits only continuing to widen, trade re-negotiations will likely continue.

3. Manufacturing has been hurt by trade uncertainty, but other sectors are doing well 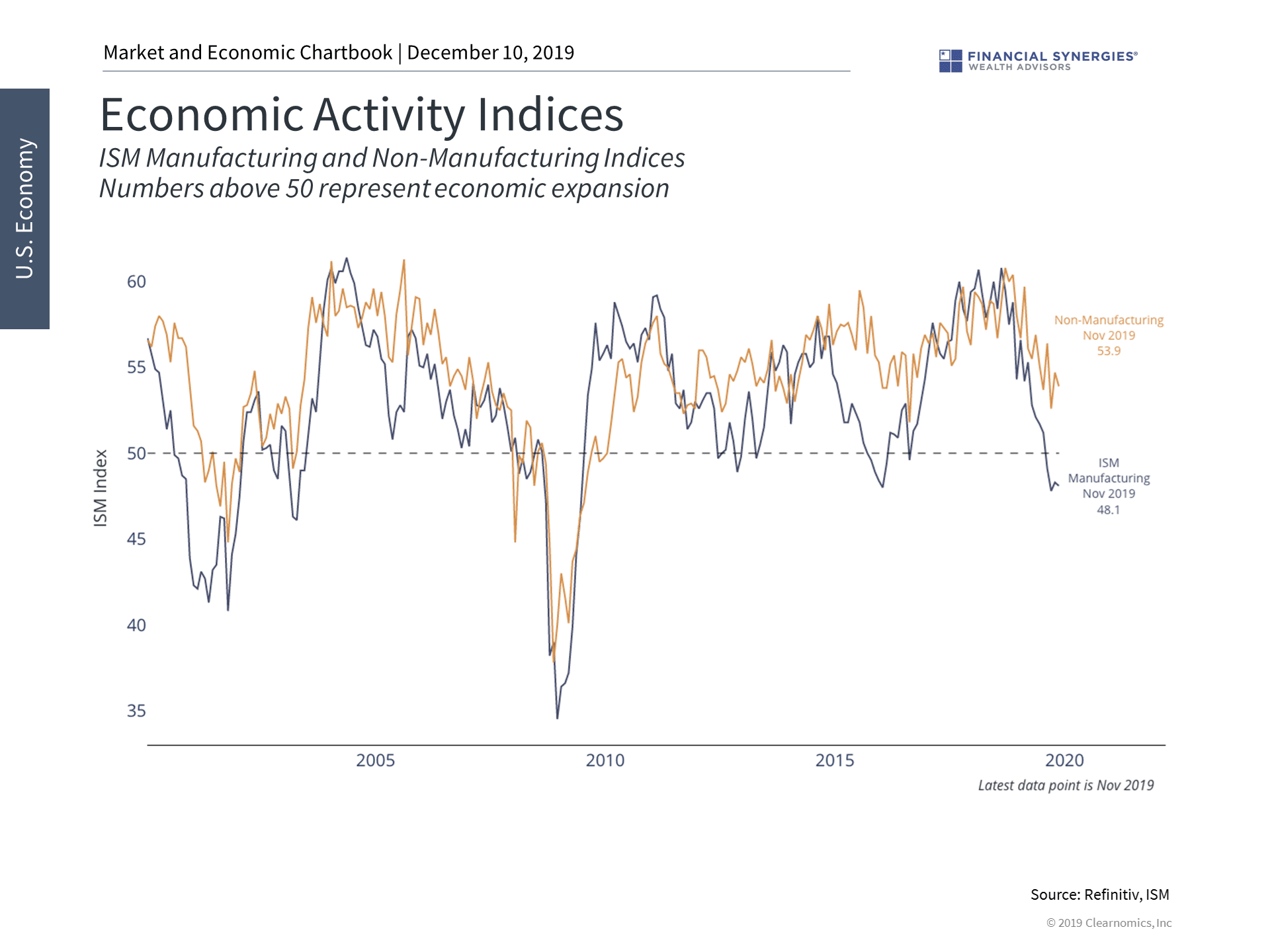