The Fed’s Guidance and Market Volatility

The stock market is experiencing renewed uncertainty and volatility only days after it recovered its year-to-date losses. Many investors are justifiably concerned about the pace at which the market recovered and the ongoing COVID-19 crisis around the world. There are also mixed feelings about the Fed’s continuing stimulus and what it means for the speed of the economic recovery. After several topsy-turvy months, it’s important to see past short-term market movements and focus on the longer-term trends as the economy reopens.

Specifically, the stock market has now seen 10 large pullbacks over the course of the year, measured based on the number of 5% declines an average investor might experience. This is on par with 2011 which was an exceptionally volatile year due to the downgrade of the U.S. debt and problems in the Eurozone. The fact that these declines occurred in such a short period of time, only to be followed by a swift recovery, has left some investors unsure about what to do next.

However, it’s also important for investors to remember that periods of volatility are normal, especially when economic trends are uncertain. In 2018, for instance, many investors expected an imminent recession. That led to nearly just as many market pullbacks in the latter part of that year. When this didn’t pan out, the market staged a significant recovery over the next twelve months. This isn’t to say that markets only go up or that they always recover quickly. Instead, it’s a reminder that over-reacting to short-term market performance is often at the expense of long-term gains.

One reason for recent market concern is that the Fed released its summary of economic projections for the first time since last December. It highlighted that the Fed does not expect to raise rates through 2022. This is the case despite their projections showing a one-time dip in GDP growth of -6.5% for 2020, which then is expected to rebound by 5% and 3.5% in 2021 and 2022, respectively. It also expects unemployment to fall to 9.3% by year-end and then slowly recover to 5.5% by 2022. Inflation is not expected to reach 2% in the near future.

Although the Fed’s economic forecasts are nowhere near infallible, they do provide a glimpse into how policymakers view the current situation. Although the direct impact of the economic shutdown is expected to be relatively short-lived, their effect on employment and inflation may persist for years. In any situation, the Fed expects that it will maintain its supportive monetary policies well into the future. This includes not just low interest rates but also its expanding balance sheet which has now ballooned past $7.2 trillion.

This has resulted in mixed feelings and cognitive dissonance for investors. On the one hand, lower rates for longer are often cheered since they tend to boost asset prices and valuation levels. On the other hand, not only are investors naturally concerned that the Fed is “artificially” propping up the stock market, but low rates suggest a poor prognosis for the economy. In the meantime, it’s widely understood that the Fed’s recent actions are an attempt to keep the financial system functioning smoothly and to keep the economy on life support.

As a result, the large bouts of market volatility in March and last week have often been in reaction to Fed decisions and guidance. In March, markets hit a rough patch when the Fed made two emergency rate cuts to zero percent. And although the initial market reaction to the Fed’s announcement last week was positive, it quickly called into question why the Fed would need to maintain low rates for so long.

Rather than react to every Fed decision and tick in the stock market, we should instead focus on the longer-term economic trends. After all, this is what drives the Fed’s decision-making and is the foundation of stock returns over the long run. Right now, the data suggest that growth can recover as businesses and cities reopen, even if it may take some time. As long as good companies don’t go bust because of forced shutdowns and bad companies don’t create ripple effects across credit markets, it’s likely that commercial and industrial activity can begin to recover over the next several quarters. Right or wrong, this is why the market rebounded so quickly in April and May, and what many investors and economists continue to hope for.

Although the recovery would be much smoother with viable treatments or a vaccine, it can occur without them. Sensible public health policy, social distancing, and targeted shutdowns are some of the tools that can be used to combat COVID-19 while keeping the economy functioning. However, the added uncertainty and global spread of the virus means that markets may continue to be volatile. As always, this suggests that investors should stay calm but also remain diversified in order to navigate the months to come.

1. Investors have experienced many stock market pullbacks this year 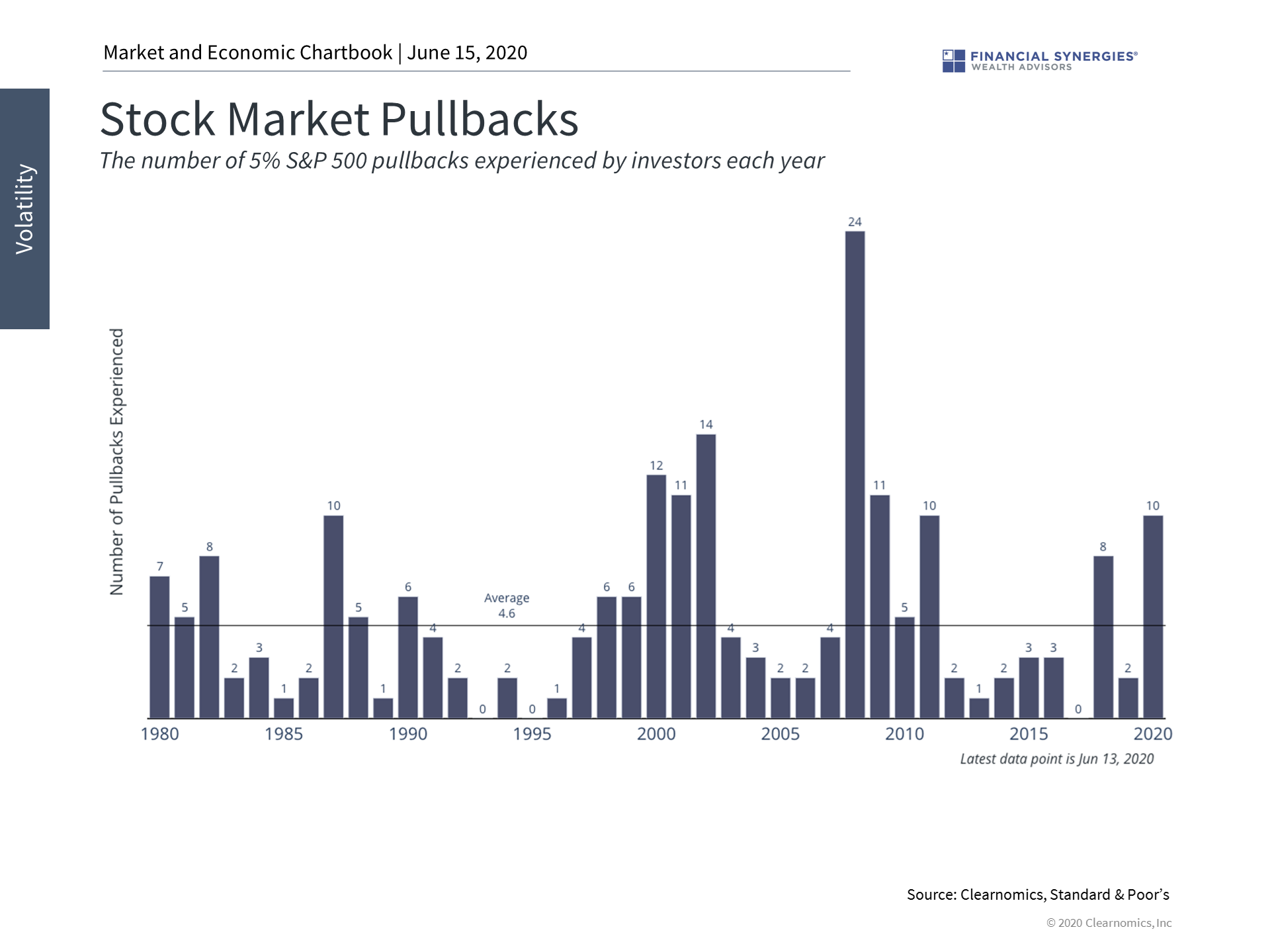 The number of stock market pullbacks now ties the number experienced in 2011 at the onset of the economic recovery. This is measured based on what an average investor experiences if they check the market occasionally. It’s not unusual for the average year to see several pullbacks. For instance, although there have been 10 pullbacks of 5% or worse this year, there were almost just as many in 2018. It’s important to keep this in perspective in order to stay invested for the long run.

2. The Fed expects to keep rates near zero for years 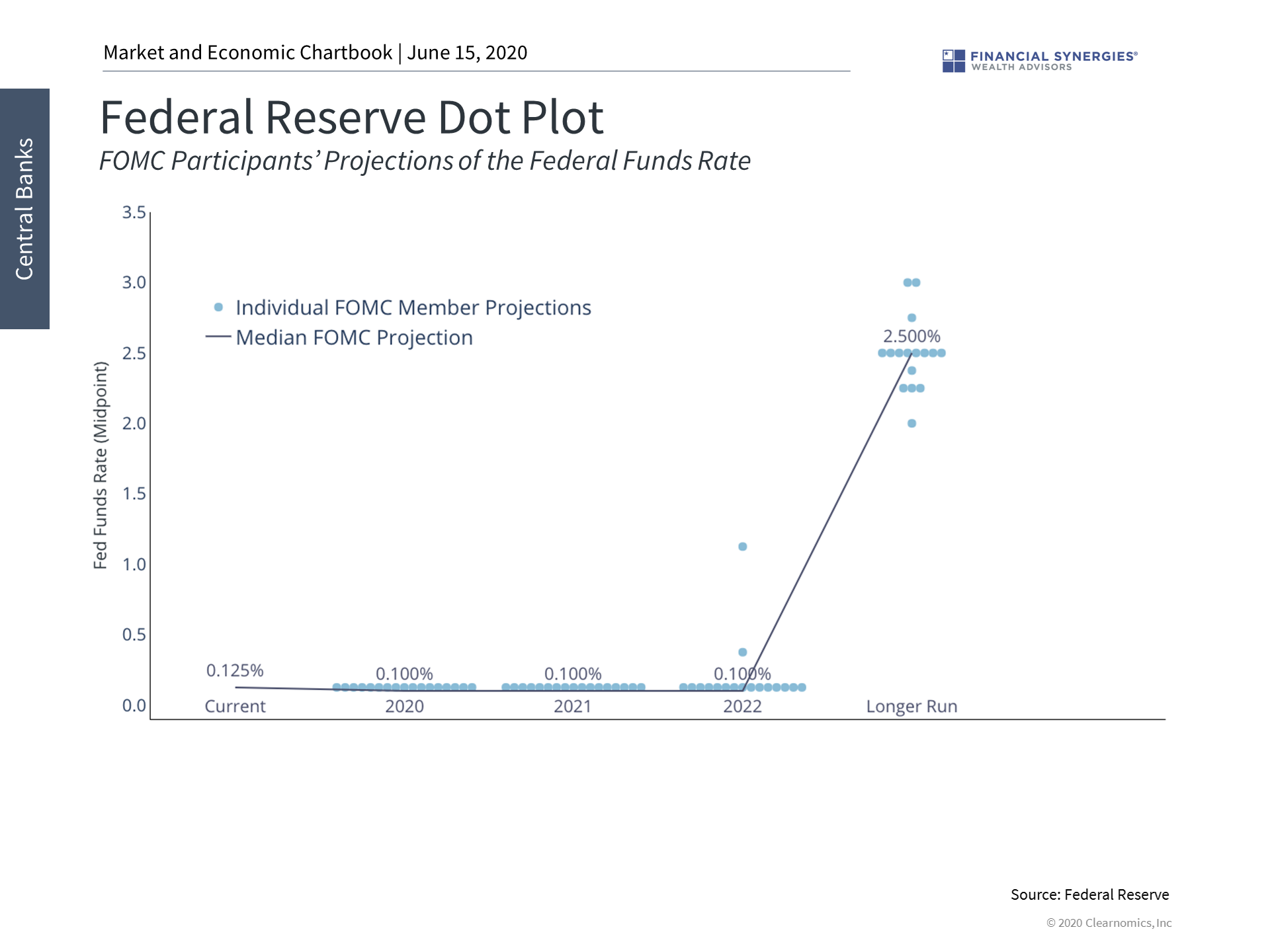 The Fed’s latest summary of economic projections suggests that it expects to keep interest rates near zero through at least the end of 2022. While the Fed’s projections don’t always pan out, this suggests that the Fed prefers to err on the side of caution as the economy gets back on track.

3. The Fed continues to expand its balance sheet to historic levels 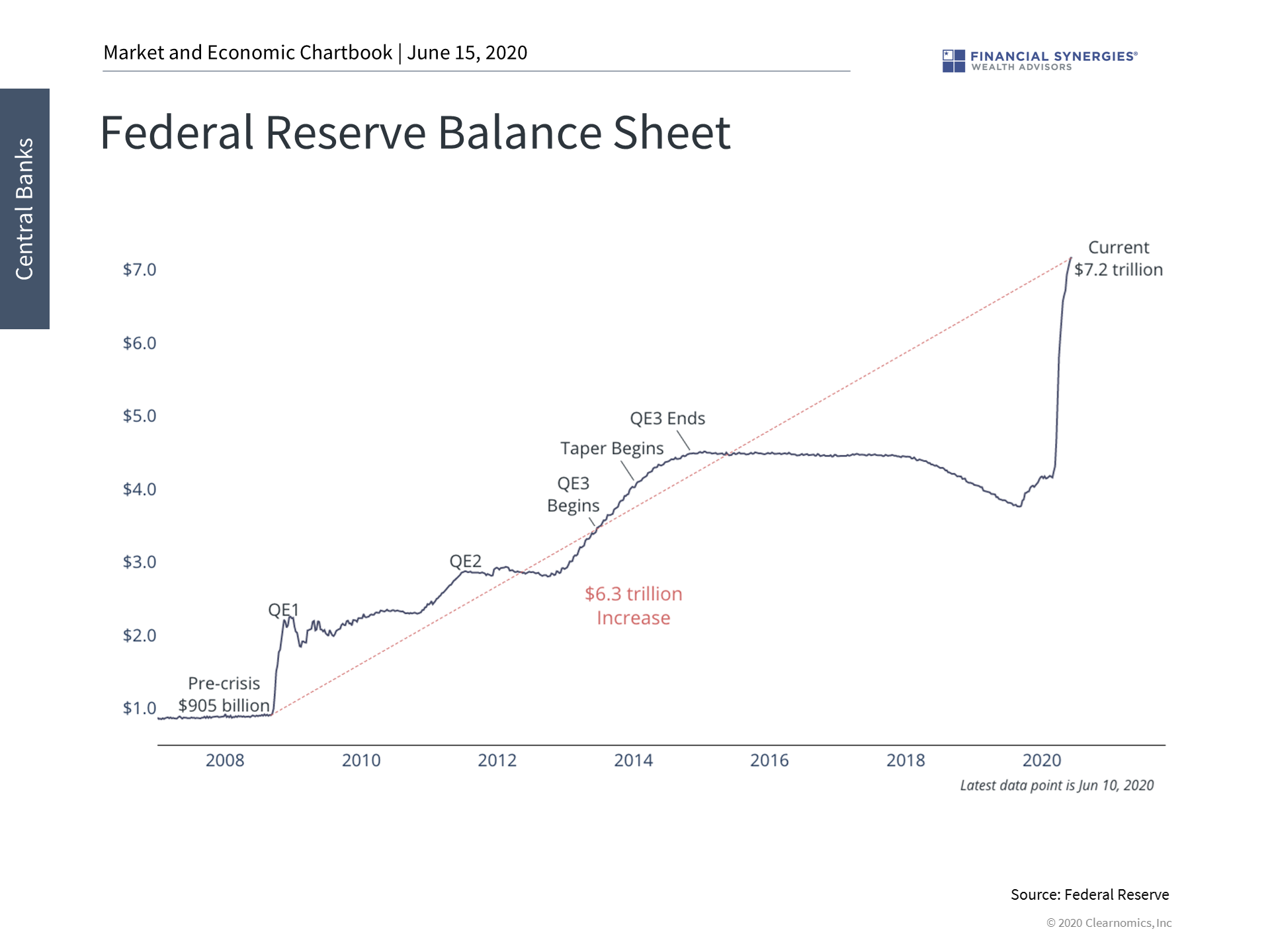 Additionally, the Fed has put its money where its mouth is by continuing to expand its balance sheet. Asset purchases have caused the Fed’s balance sheet to balloon from $4 trillion to over $7.2 trillion in just a matter of months. The Fed’s goal is to ensure that the financial system continues to function smoothly despite recent economic disruptions.

Although markets are experiencing volatility and the economic recovery may be rocky, investors should remain disciplined and focus on their long-term financial goals.