Should Rising National Debt Concern Us?

There aren’t many issues that spark as much investor concern as our rising national debt. It’s clear that the elevated level of federal debt and the annual budget deficit are a result of long-term fiscal trends as well as a reflection of the financial crisis of 2008.

Some may even argue that fiscal stimulus helped to prevent a true economic depression. However, it’s also clear that these fiscal imbalances will have long-lasting consequences that are not yet fully understood. The fact that this is a heated political issue makes it even more difficult to discuss in a sensible manner.

Of course, there are many distinct ways in which rising government debt affects our lives. As citizens, our annual deficits reflect our policy choices, with which roughly half the country will disagree. The national debt is a burden on future generations and may affect our future global competitiveness. It has also resulted in short-term crises in Washington over the past ten years including debt ceiling debates and “fiscal cliffs.”

But regardless of how we feel personally and politically about these issues, it’s important to distinguish them from their investment implications. The question for markets is simple: do the current levels of debt and deficits affect long run investment returns? Even if the national debt is an important issue, should we significantly alter our portfolios or financial plans in response?

Below, we review three charts on the federal debt, annual budget deficits, and current tax rates. The bottom line for investors is that while the patient may be ill, it is no longer in critical condition. The federal debt may be higher than most would like, but the fact is that annual deficits are at manageable levels at the moment.

However, with wider and wider gaps, and seemingly no political will in Washington to reduce spending, it’s possible that tax rates will have to give. This is a major component of the current political conversation and could have implications for investors. Over the long run, it’s important for investors to make appropriate use of tax-advantaged accounts, and to stay balanced and diversified.

1. The federal debt is elevated 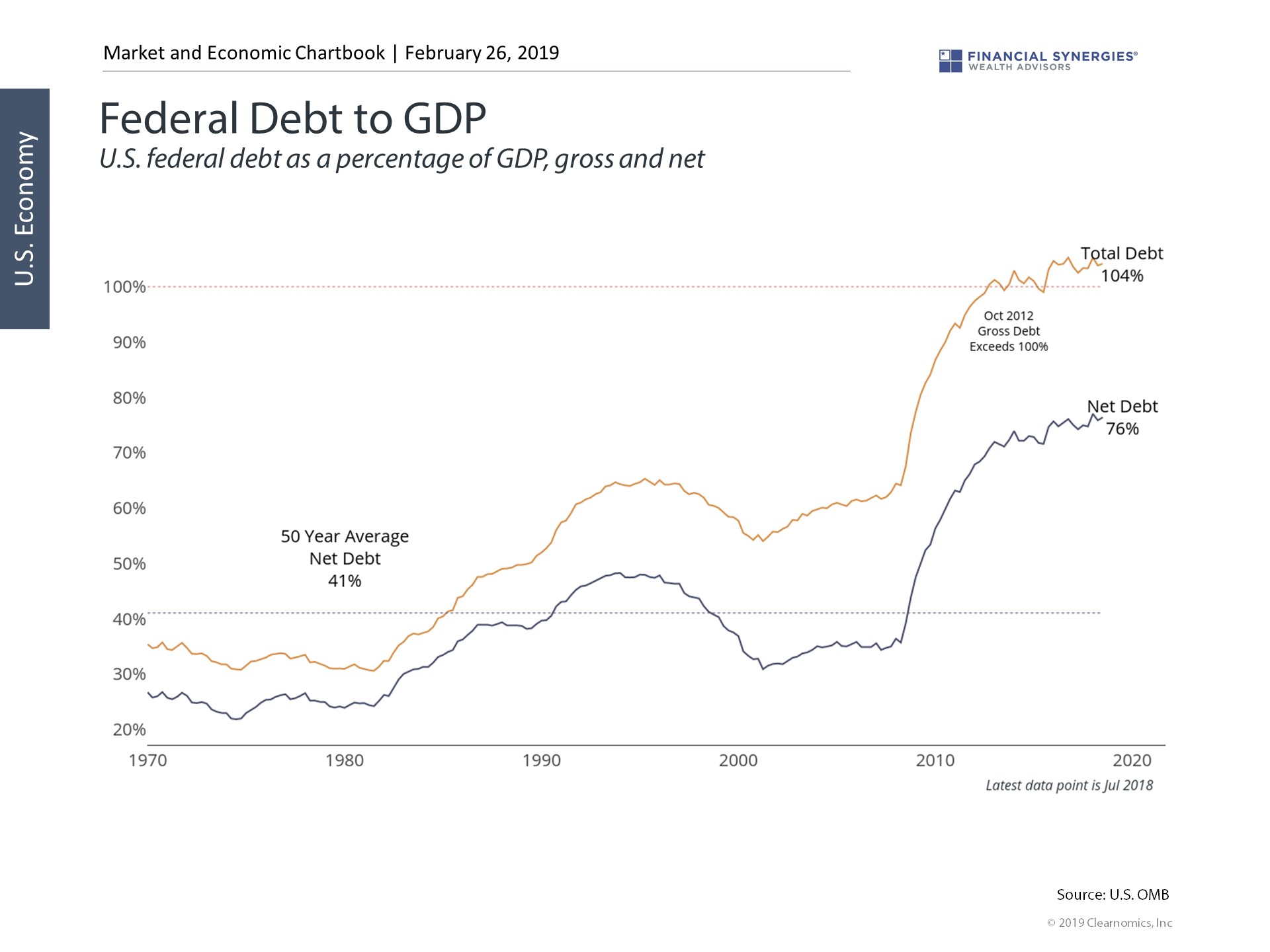 The total federal debt rose above 100% of GDP in 2012. However, it’s important to distinguish between the total debt – i.e. “gross” debt – and “net” debt. This is because much of the debt issued by the government is actually held by other parts of the government. This is money that simply moves from one pocket to the other. Excluding this results in net debt of 76% of GDP.

To be clear, this is still an elevated level, both in absolute terms and compared to history. However, many who worry about the national debt use household finances as a metaphor. If a household had debt that exceeded their annual income, this would be a serious issue. And while this is certainly applicable in some ways, it doesn’t tell the whole story.

This is because the government differs from households in many respects. First, much of the lending occurs within the country, with Treasury securities held by citizens and institutions. Second, there can be many legitimate uses of debt that can foster growth. Borrowing money to buy a new car might seem frivolous, unless that car is needed to commute to a better job. Third, some of the debt reflects the fact that other countries are willing to lend to us at subsidized rates. It’s not irrational to take advantage of this – up to a point of course.

The real question is the pace at which the national debt is rising. This depends on the annual budget gap between spending and revenues known as the federal deficit.

2. The federal deficit is rising, but is lower than crisis levels 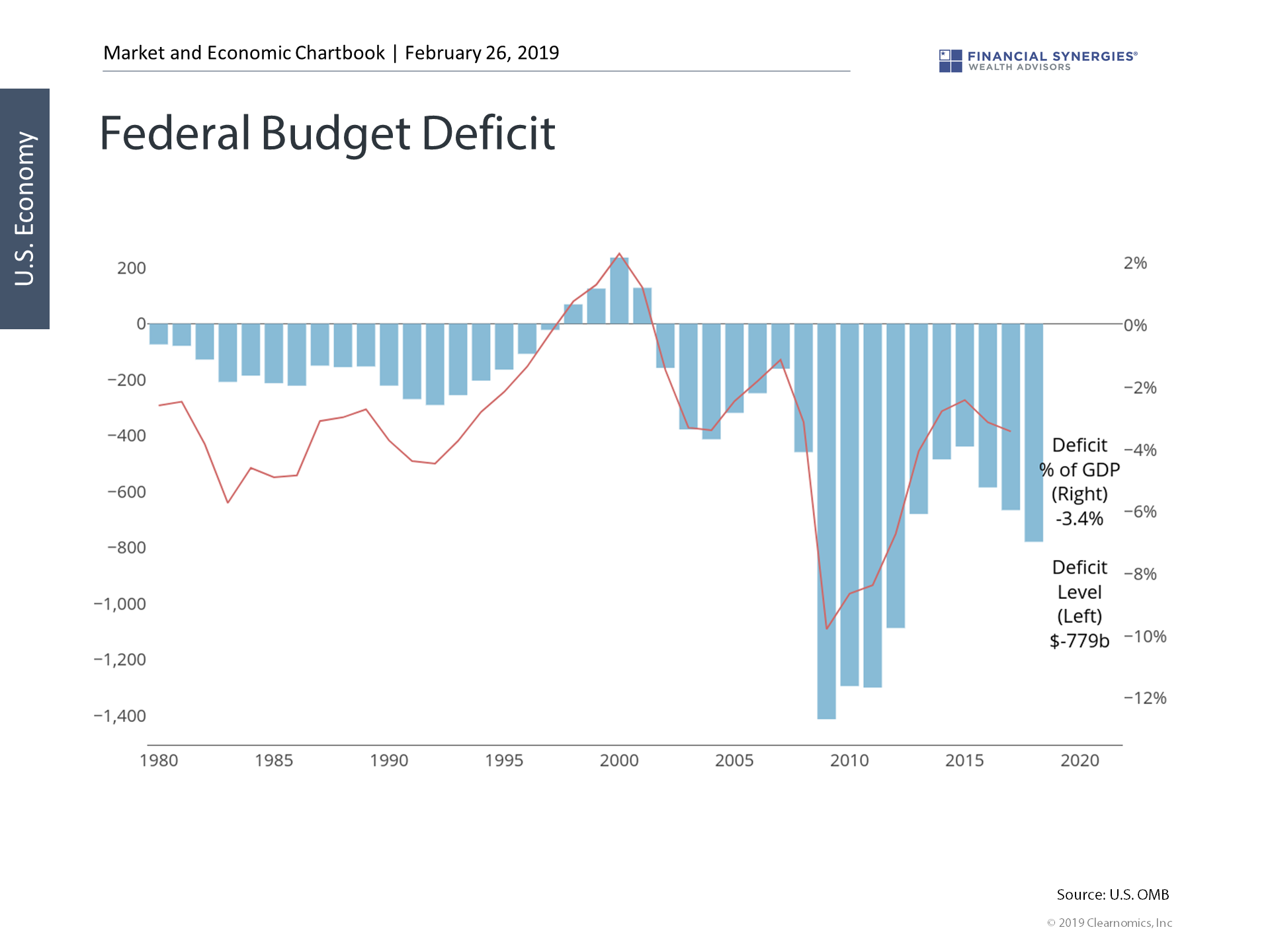 While many investors worry about the effect of growing deficits on Treasury yields, economic growth, and the stock market, it appears stable at the moment. Back in 2009, the deficit was in critical condition, reaching as high as 10% of GDP, the worst levels since World War II.

At the moment, the deficit is around 3.4% of GDP, but may be increasing. While most investors would prefer more manageable deficits, or even surpluses, this is a level at which markets are unlikely to panic. 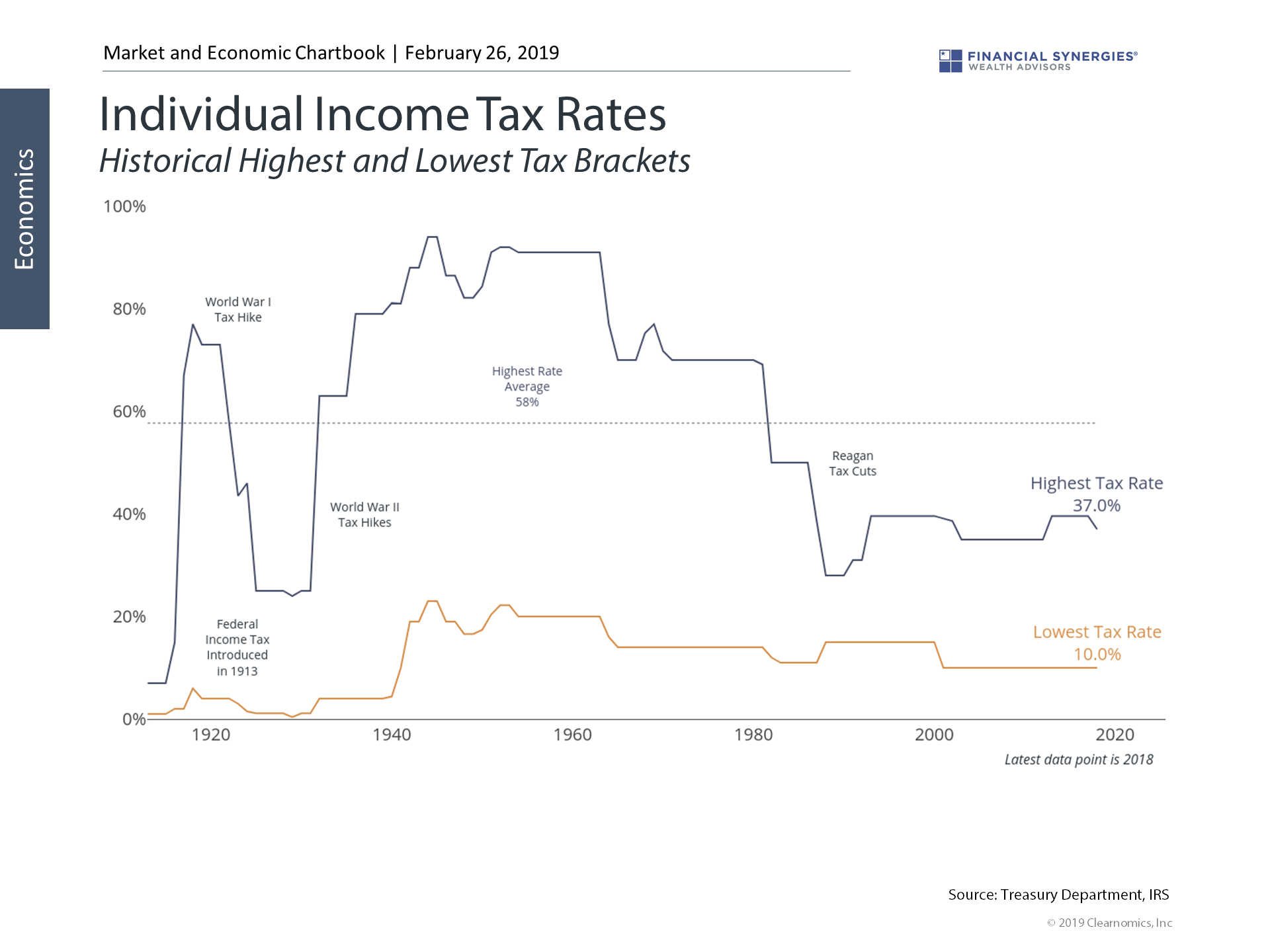 The revenue side of the government’s income statement is tax revenue. Tax rates for both individuals and corporations are still low by historical standards, especially compared to the pre-Reagan tax cuts. In fact, for much of U.S. history, the highest marginal rates exceeded 90%!

The bottom line? While the federal debt and deficit are elevated, the patient is in stable condition. Investors should continue to focus on fundamental drivers of portfolio returns and staying balanced.