The start of a new year is a time to reflect and plan. For me, this means understanding what’s driving the markets and economy, reviewing portfolios and financial goals, and reminding myself of the basic principles of investing. This opportunity to quietly reflect, especially after a year of spectacular investment returns, is a rare gift. After all, we will no doubt be bombarded by day-to-day headlines throughout the year to come. Here’s a quote that puts today’s “journalism” into perspective.

“Progress is invisible to most people because they don’t get their understanding of the world from numbers; they get it from headlines. Journalism by its very nature conceals progress, because it presents sudden events rather than gradual trends. Most things that happen suddenly are bad: a war, a shooting, an epidemic, a scandal, a financial collapse. Most things that are good consist either of nothing happening – like a nation that is free of war or famine – or things that happen gradually but compound over the years, such as declines in poverty, illiteracy and disease.”

Despite significant market uncertainty punctuated by short periods of volatility, global markets surged in 2019. The positive returns across a breadth of asset classes made 2019 one of the best years of the market cycle. This occurred despite constant worries around the Fed, trade wars, impeachment hearings, Brexit, and more.

Perhaps the most important reason for these returns is that the economy is still healthy. The recession that many investors feared at the end of 2018 didn’t occur and few economists now expect a recession in the near future. The unemployment rate of 3.5% across the country is a 50-year low and consumer net worth is at a record high of $113 trillion.

An equally important reason for these gains is that the Federal Reserve is pouring monetary stimulus into the system. The Fed made a full U-turn from raising rates last December – which slows the economy – to lowering rates in July. In doing so, the Fed effectively makes it cheaper to borrow money which tends to stimulate the economy and the stock market. This excited many investors, resulting in stocks hitting new all-time highs. For now, the Fed is on pause with additional rate cuts, although it continues to use its balance sheet to support the financial system.

Finally, there is a technicality to be aware of that visually inflated last year’s stock market return numbers. Because 2018 ended near the market lows, a significant part of 2019’s return was simply returning to previous levels. From the 2018 peak to the end of 2019, the U.S. stock market gained 10%. While this is still a terrific return, it’s not quite the 28% S&P 500 price return number that will be discussed and remembered.

The unavoidable truth about investing is that there are always reasons to be worried. All of the recent investment gains happened despite negative headlines and investor concerns all year long. To rephrase Steven Pinker’s eloquent quote above, negative headlines capture our attention while positive developments can slip by unnoticed. These negative headlines caused the stock market to temporarily drop three times over the course of 2019.

Despite this, investors who stayed disciplined were rewarded in the end – especially those who stayed invested at the end of 2018. Thus, an important skill when investing over the long run is to be able to see past short-term news. The fact that the economy stayed healthy and a trade deal, even an interim one, was eventually reached meant that much of the hand wringing by investors during the year was all for naught.

On that note, one challenge we’ll all face in 2020 is that media attention will focus on the presidential election. There will be endless speculation and concern over what each candidate will mean for the stock and bond markets. And while elections are incredibly important as citizens, voters and taxpayers, investors should avoid over-reacting or jumping to conclusions based on political preferences.

The reality is that how the stock market responds to elections is very difficult to predict. In fact, investors have feared that just about every presidential candidate in history would spell the end of economic growth and stock returns. In recent times, this was certainly said of both Presidents Obama and Trump.

While economic policies can certainly make a difference over time, investors are usually better off focusing on what affects portfolios in the long run rather than reacting to day-to-day political headlines. In other words, investors should stay invested and save their energy for the polls.

Looking Further Into the Cycle

There are some indisputable facts about the market and economic cycle. In 2020, we will celebrate the 11th anniversary of the bull market and economic expansion – already the longest in history. The economy appears to be growing at a healthy pace of around 2%. Inflation is still benign despite historically low unemployment, although wages are beginning to rise more quickly. Interest rates are also quite low after a tumultuous 2019, during which the yield curve briefly inverted. All of these facts are classic signs of the later stages of the business cycle.

How much longer and further the business cycle goes requires a large degree of speculation. Areas such as manufacturing which have suffered over the past year will have to recover. Global economic growth, dampened by recent trade disputes, will have to rebound as well. Corporate earnings, which are forecast to have grown by only 1% in 2019, will need to accelerate in the next couple of years. The Fed will need to carefully maintain balance in the financial system, and Washington may need to engage in fiscal stimulus and pro-growth policies.

Ultimately, just as many investors were too fearful in 2018, some investors may be too greedy after a historic 2019. With stocks up significantly last year, many may continue to expect similar gains.

While we should be grateful for a strong year, it’s important to have realistic expectations. The most important takeaway is that many of the reasons that stocks rose last year, which we discussed above, may be of less help in 2020. Today, very few investors are worried about a recession and the Fed is already stimulating the economy.

Stocks can still do well if the economy is healthy, but we shouldn’t expect the U.S. stock market to rise another 30%. Instead, holding a diversified portfolio has always been the best way to benefit from stock market gains while protecting from uncertainty. This will continue to be the case in the decade ahead.

Below are seven charts to help to put the market and economy in perspective: 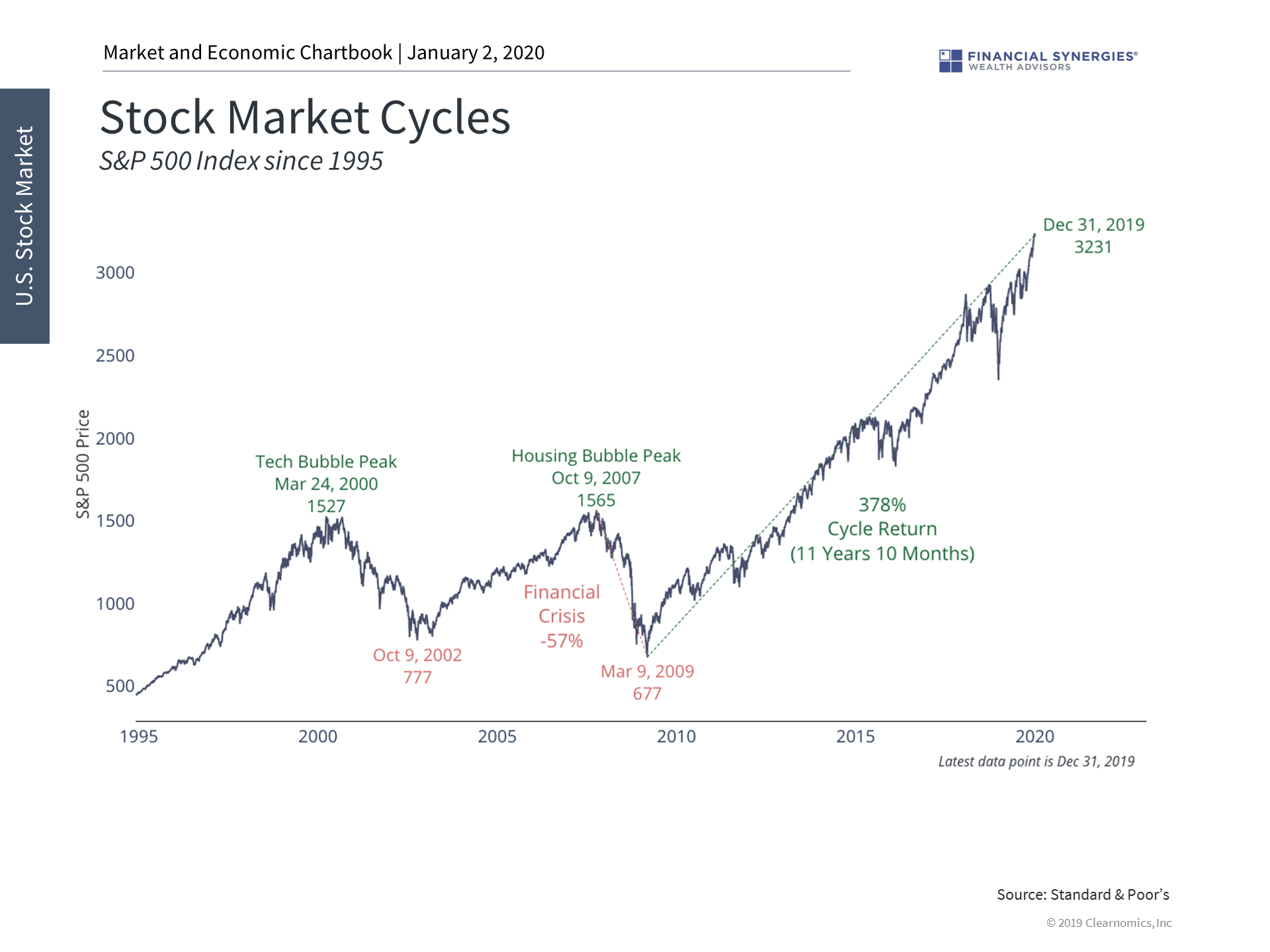 The S&P, NASDAQ and Dow Jones Industrial Average all achieved new record highs near the end of 2019. A combination of factors including the Fed, a healthy economy, and an interim trade deal helps to overcome investor fears.

2. The market was relatively calm throughout the year 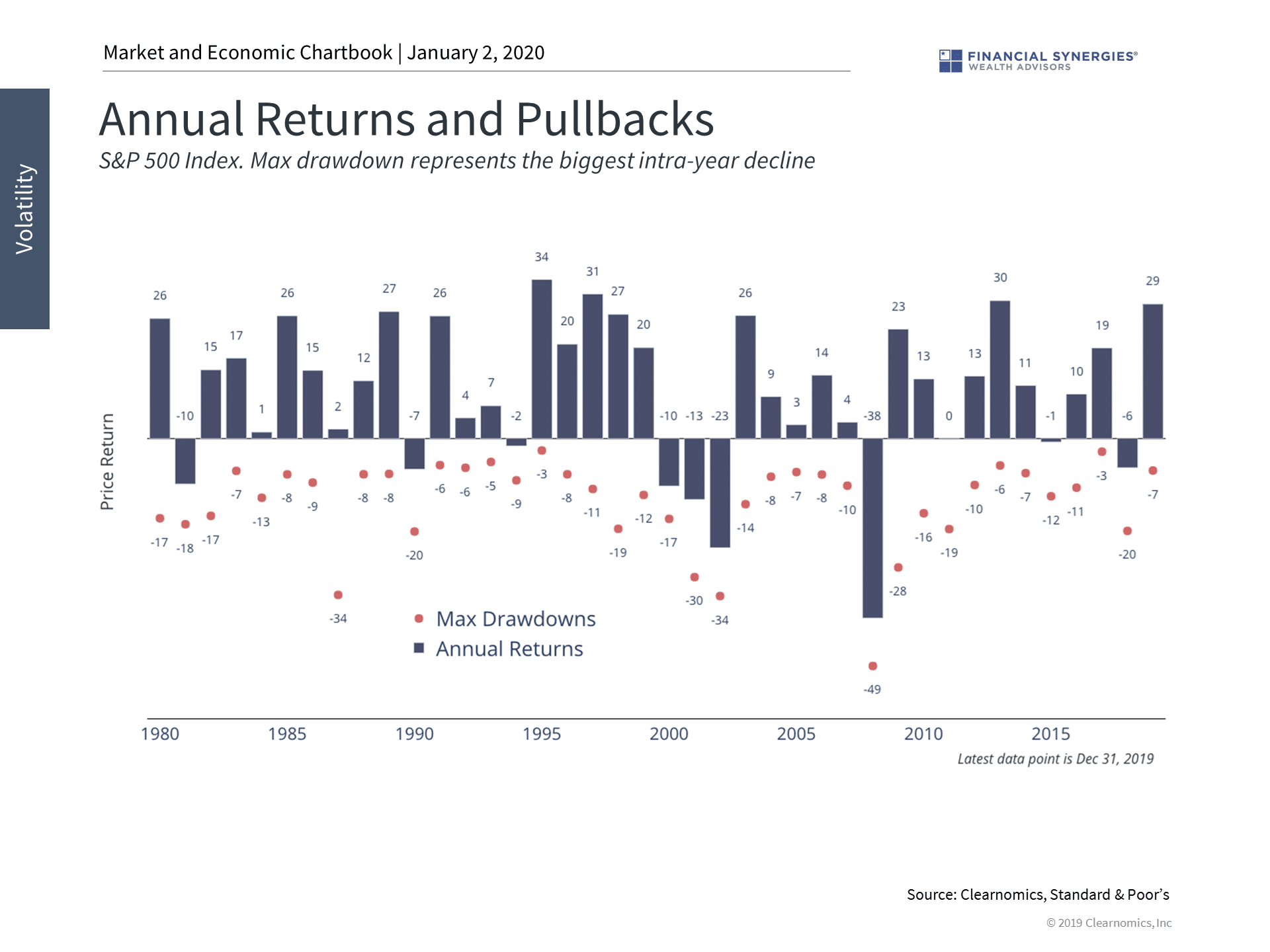 Despite daily and weekly market volatility, including three periods of market pullbacks, markets were calm in 2019 by historical standards. The largest decline in the S&P 500 was 7%, only about half of the historical average in any given year.

One principle of investing is that temporary market swings can occur at any time. Investors should have proper expectations and be prepared for volatility in the months ahead by staying the course, not by trying to time the market.

3. Earnings growth was slow but could speed up in 2020 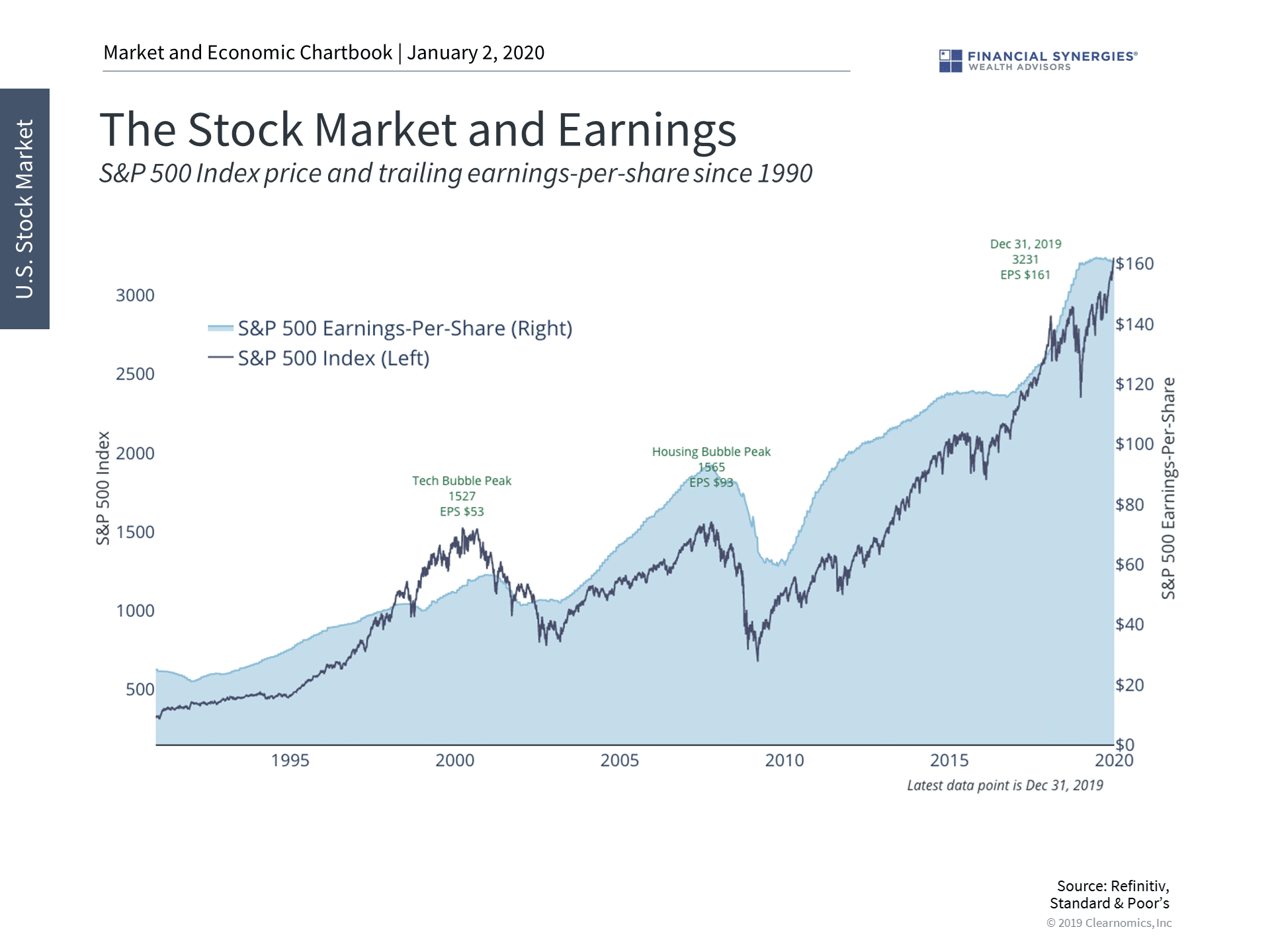 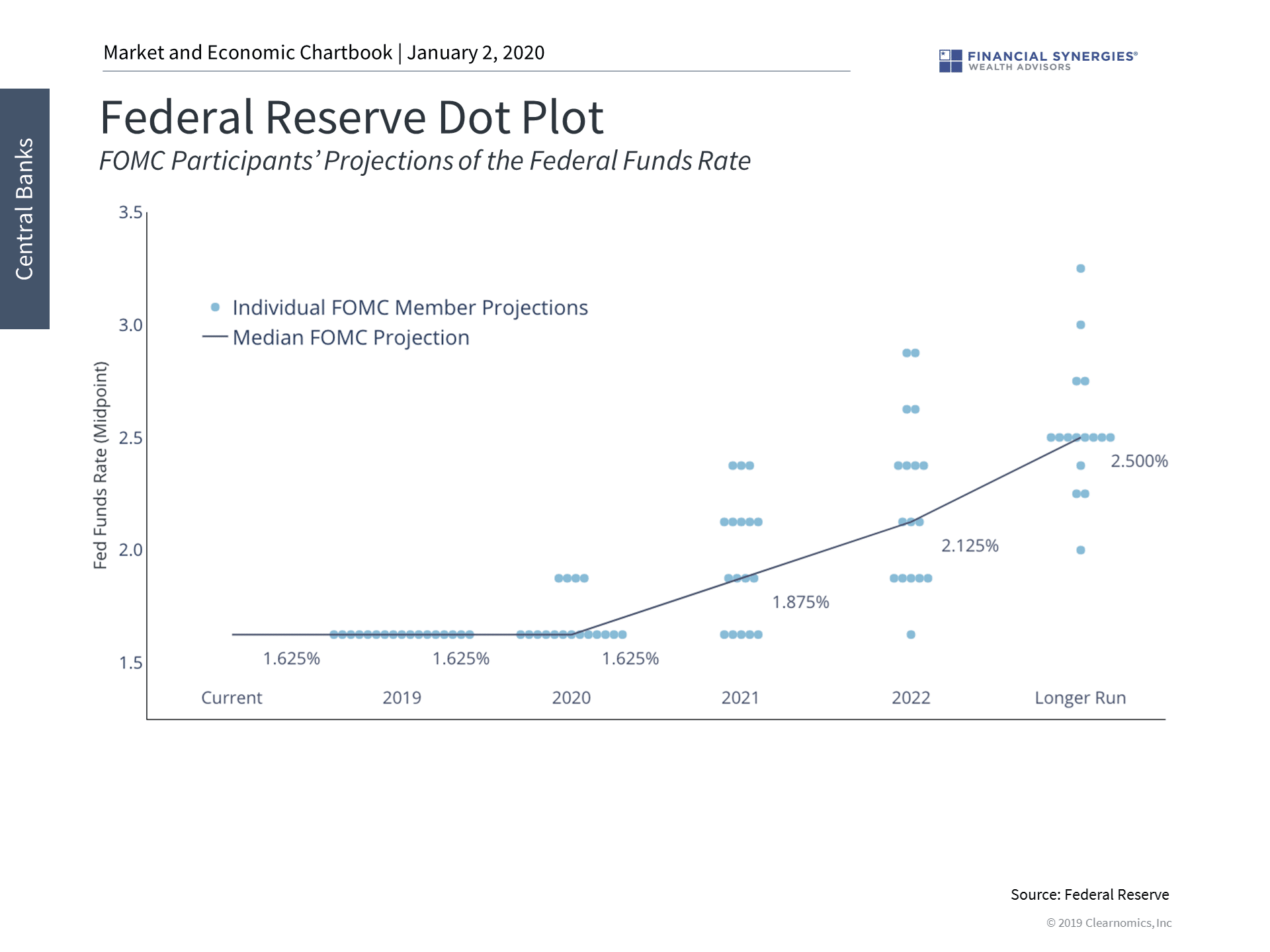 The Fed played a large role in boosting investment returns across a variety of asset classes, including stocks and bonds. Not only did the Fed reverse course by cutting interest rates three times, their projections suggest that they expect rates to remain flat into 2021.

While markets have cheered these Fed moves, it’s important to remember that this was in response to global economic risks and a slowing economy. Historically, Fed rate cuts late in a cycle are a negative sign. While this time may be unique for several reasons, it’s important to maintain a longer-term perspective. 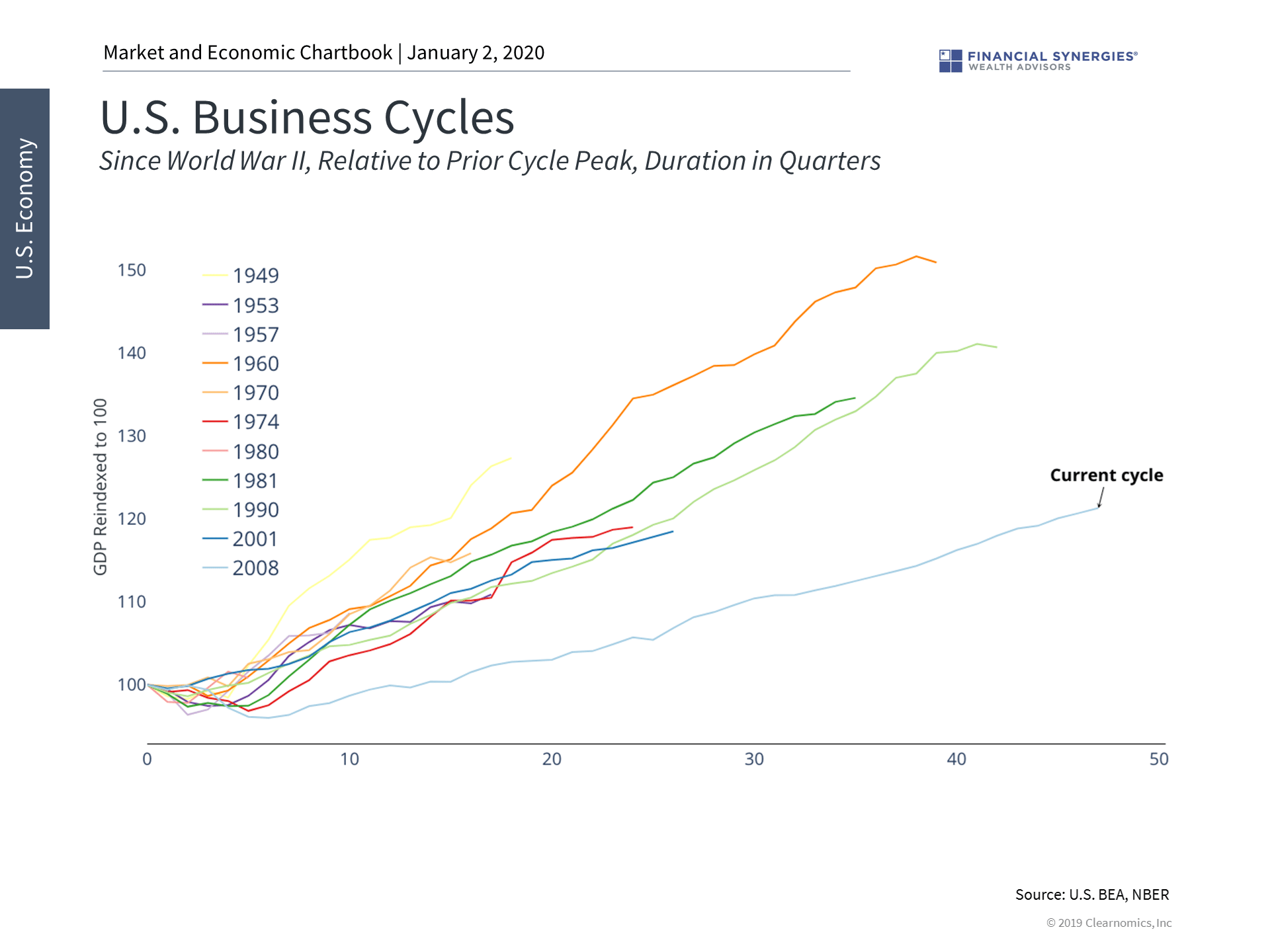 At nearly 11 years, this U.S. economic expansion is officially the longest on record. The bad news is that the economy grew at only a fraction of the pace of past business cycles. Still, even slow and steady growth has been enough to push asset prices to record levels. 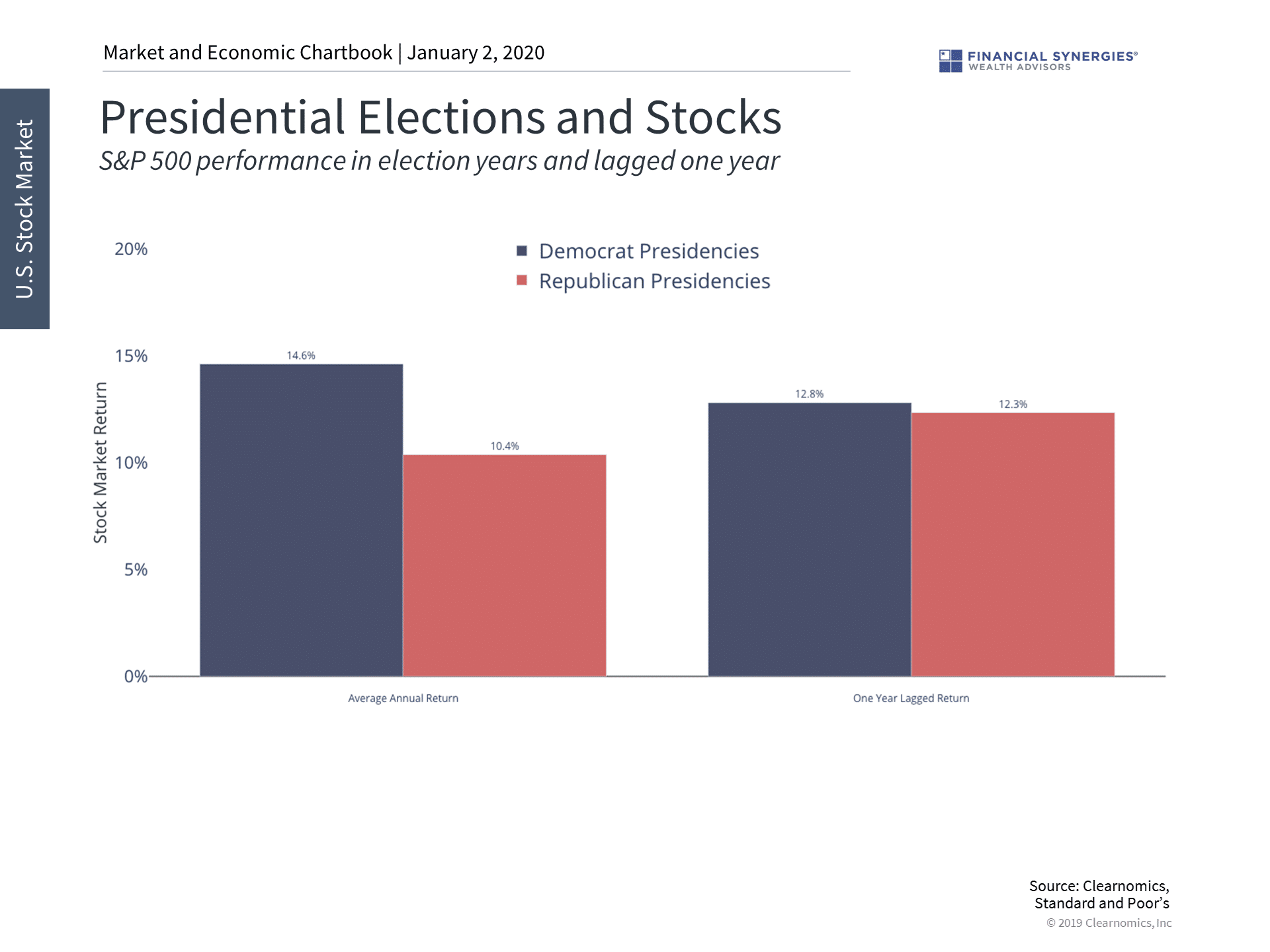 Presidential elections will garner a significant amount of media attention, and rightly so. However, investors should be cautious when reacting to headlines in their portfolios. The reality is that markets have performed well under both political parties, especially when one considers the time it takes for policies to be passed, implemented, and trickle across the economy. For investors, the business cycle is a much more important driving force. 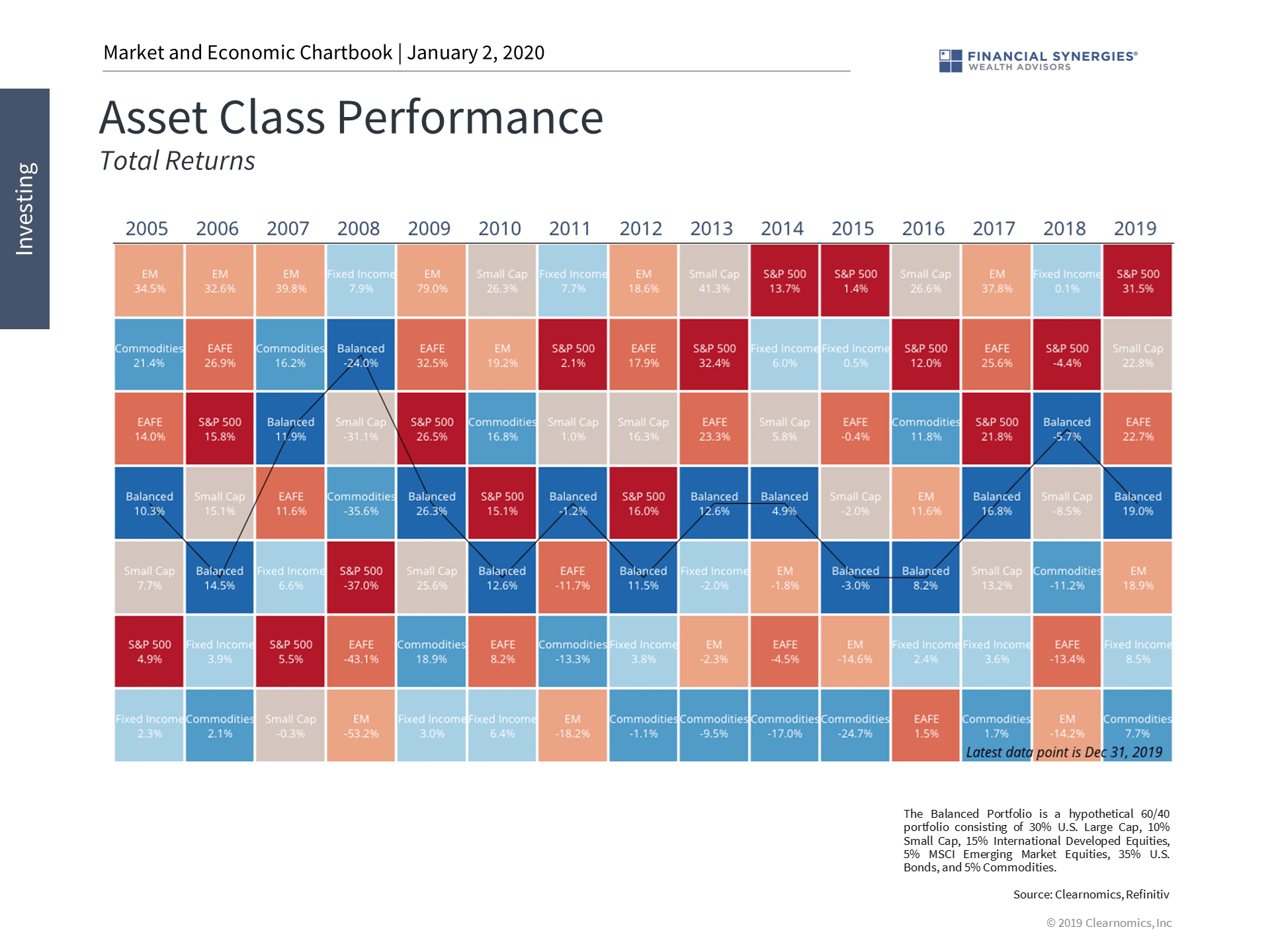 A breadth of asset classes performed well in 2019, with a hypothetical 60/40 portfolio generating the highest returns since 2009. Both stocks and bonds did well, especially with interest rates falling.

The U.S. stock market outperformed many other regions again in 2019. However, if the global economy can re-accelerate, it will be even more important for investors to diversify globally.

Investors who can see the current market and economic landscape clearly are in a better position to profit in 2020.