New laws are here, and there are some Medicare changes retirees need to know about.

The new Inflation Reduction Act is a big enchilada of green energy spending, corporate taxes, and some pretty major changes to Medicare.

Is this deal a big deal? Could be. I’ll wrap it up for you at the end.

First, here are some Medicare changes you might want to know about:1 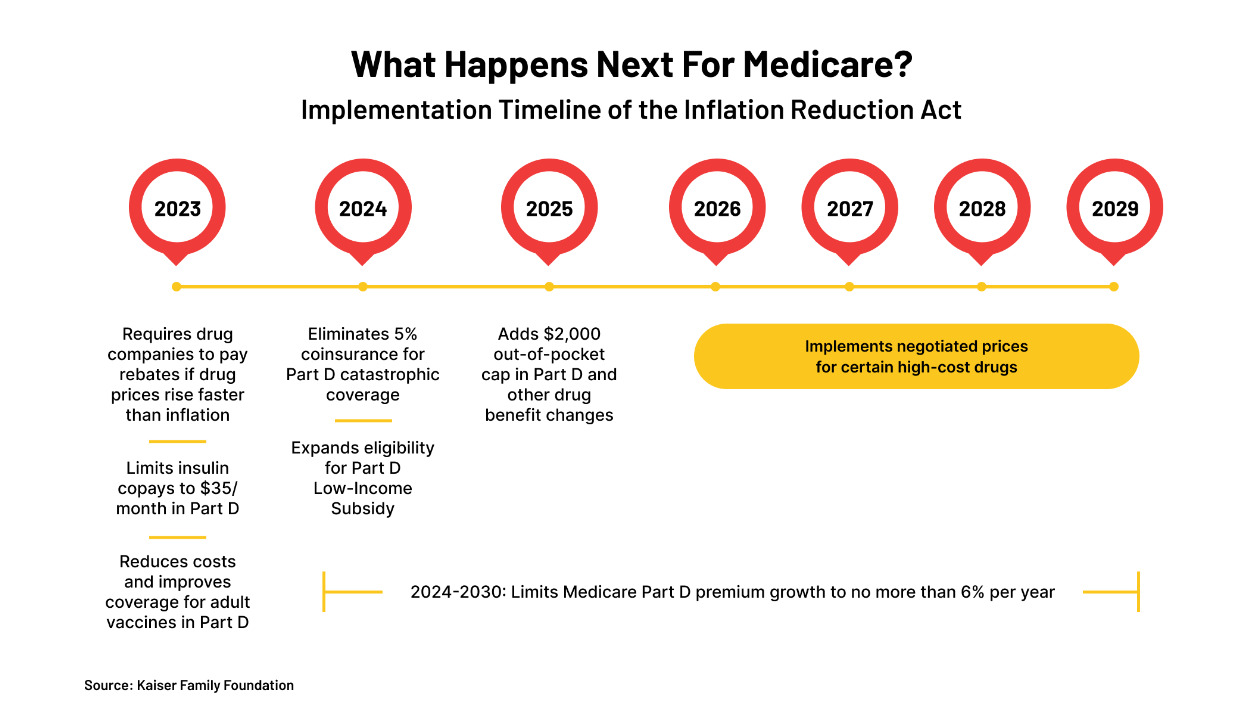 Medicare will be able to negotiate drug prices (starting in 2026)

For the first time, the Medicare program will have the power to negotiate the cost of (some) drugs.

Before price negotiations kick off, new rules will also force manufacturers to pay “rebates” to the government if they increase covered drug prices higher than general inflation (starting in 2023) and limit Medicare Part D premium increases each year (starting in 2024).1

Why does this matter? Drug price inflation is crazy high, outpacing general inflation for thousands of medications.2

Lower prices could lead to overall program savings (and possibly lower Medicare premiums), plus save money for retirees who depend on those specific drugs.

Under current laws, there’s no cap on how much people have to spend out-of-pocket for their medications, which can really add up under cost-sharing requirements.

Starting in 2024, folks who spend enough out-of-pocket on medications to surpass the “catastrophic threshold” will no longer have to pay coinsurance for their expensive drugs.1

Why does this matter? Many drugs (especially new ones) can be devastatingly expensive.

Capping annual drug costs will hopefully not only save folks money, but also lead to more predictability in their yearly health care costs.

Starting in 2023, enrollees won’t have to spend more than $35 per month on their insulin copays.1

Why does this matter? As anyone who needs insulin will tell you, it can get pricey, costing over $500 per year on average.3 Much more if you need one of the more expensive versions.

Capping costs could help the millions who need this life-saving medication.

All vaccines will be free under Part D (starting in 2023)

While flu and COVID-19 shots might be covered for many, most vaccines are not.

Why does this matter? Many adult vaccines can cost quite a few bucks. For example, the shingles vaccine can cost upwards of $150 a pop and other recommended jabs can also be very pricey.4

Making vaccines free could not only lower the financial impact of immunizations, but also increase their availability to lower-income folks.

This is where the future gets hazy. Legal challenges or post-election changes could end up altering much of what’s in the Inflation Reduction Act. And much depends on the actual execution of the new rules.

The new rules could also mean premium changes as insurance companies figure out their models.

Since health care is one of the biggest unknown costs in retirement, lowering drug costs and making spending more predictable for Medicare recipients could absolutely have a positive impact on millions of people.

Will the Inflation Reduction Act help the economy?

This is certainly a controversial (and political) question. Whether the overall bill will live up to its name, lower inflation, and have a net positive impact on the economy remains to be seen.

Some economists project that the bill will end up modestly reducing inflation and trimming the federal budget over the next decade.5 Many economists disagree.

Others are concerned about the impact of the new corporate tax rules written into the legislation.

As is usually the case, time will tell.