Looking Beyond A Fed-Driven Year

Inflation, interest rates, and the Fed have been the driving forces behind the market in 2022. These factors broke a number of trends that have influenced portfolio decisions over the past several decades, creating an uncomfortable investment environment.

This has kept many investors guessing at what might come next, leading markets to massive swings back and forth for weeks at a time. For investors who can ignore the short-term ups-and-downs of the market, this year is a reminder that staying invested is one of the most important principles for achieving long-term financial goals. We have to view this past year with perspective while positioning for the opportunities ahead. 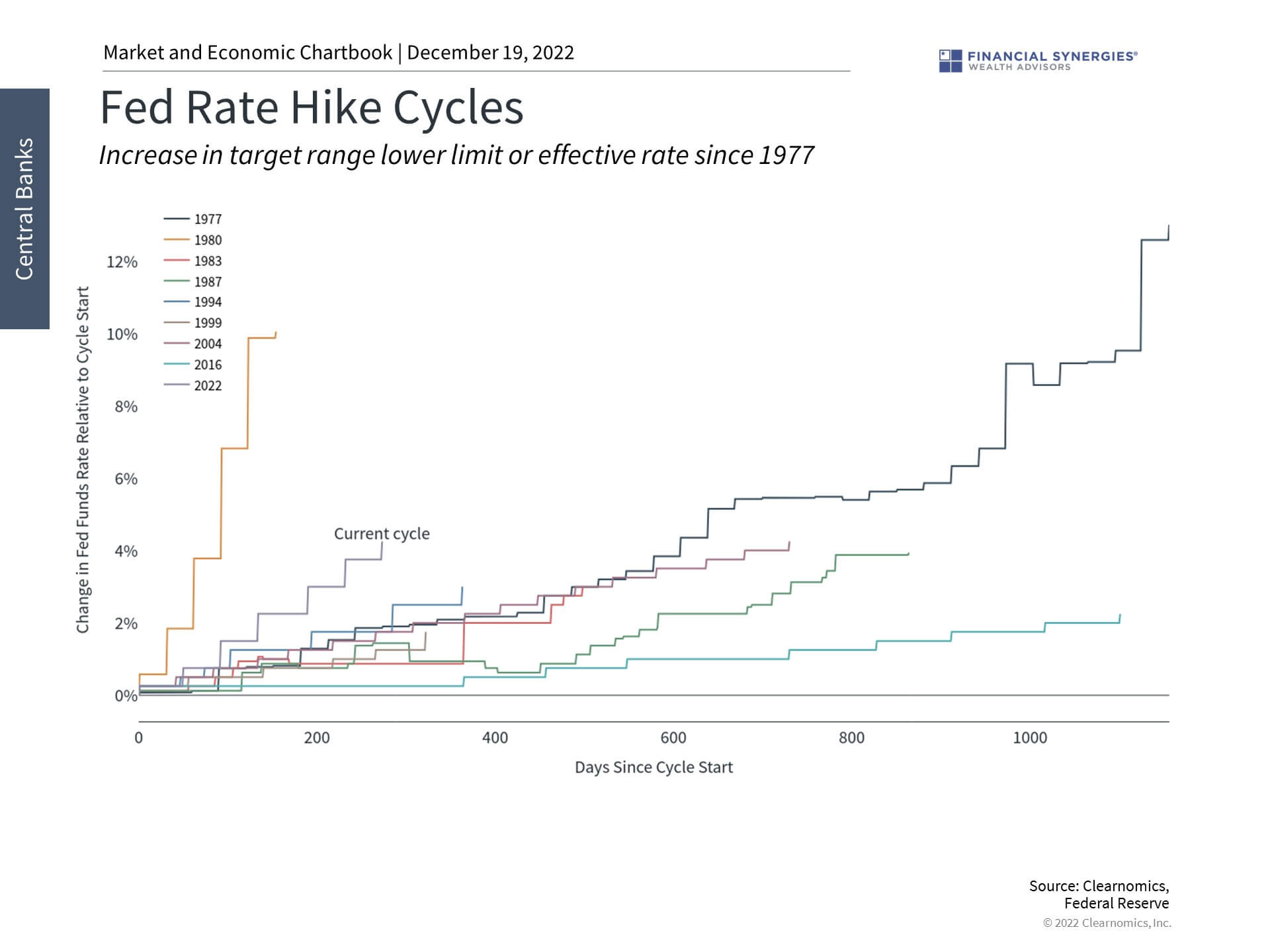 To highlight how manic markets have been, we have only to look at the many swings in sentiment this year. Markets fell from their all-time highs at the beginning of the year due to concerns that the Fed wasn’t reacting quickly enough to inflation.

Markets then rallied in March when the Fed began to raise rates, only to then plummet into bear market territory as the inflation data worsened. Markets then rallied 17% from June to August in hopes that the Fed would slow its rate hikes, for fear of a recession. These hopes were dashed when Fed Chair Powell doubled down on the inflation battle by maintaining 75 basis point hikes, causing markets to give up their gains. Markets then jumped 8% in October and 5% in November, some of the best monthly gains in history, before once again stalling out.

For many, this turbulent ride may feel like a reason to avoid the stock market. However, didn’t markets rise steadily from 2009 to 2020, and then again during the pandemic recovery?

The reality is that markets were turbulent even during those periods and investors were constantly worried about a whole host of issues. It’s only with the benefit of hindsight, and possibly rose-colored glasses, that it feels as if those were calmer periods.

So, while markets will very likely end the year negative, the final numbers won’t be nearly as bad as some of the low points of the year might have suggested. At the same time, there have been periods of optimism that have highlighted how quickly markets can rebound once the underlying fundamentals turn around.

Markets have responded to rising inflation all year 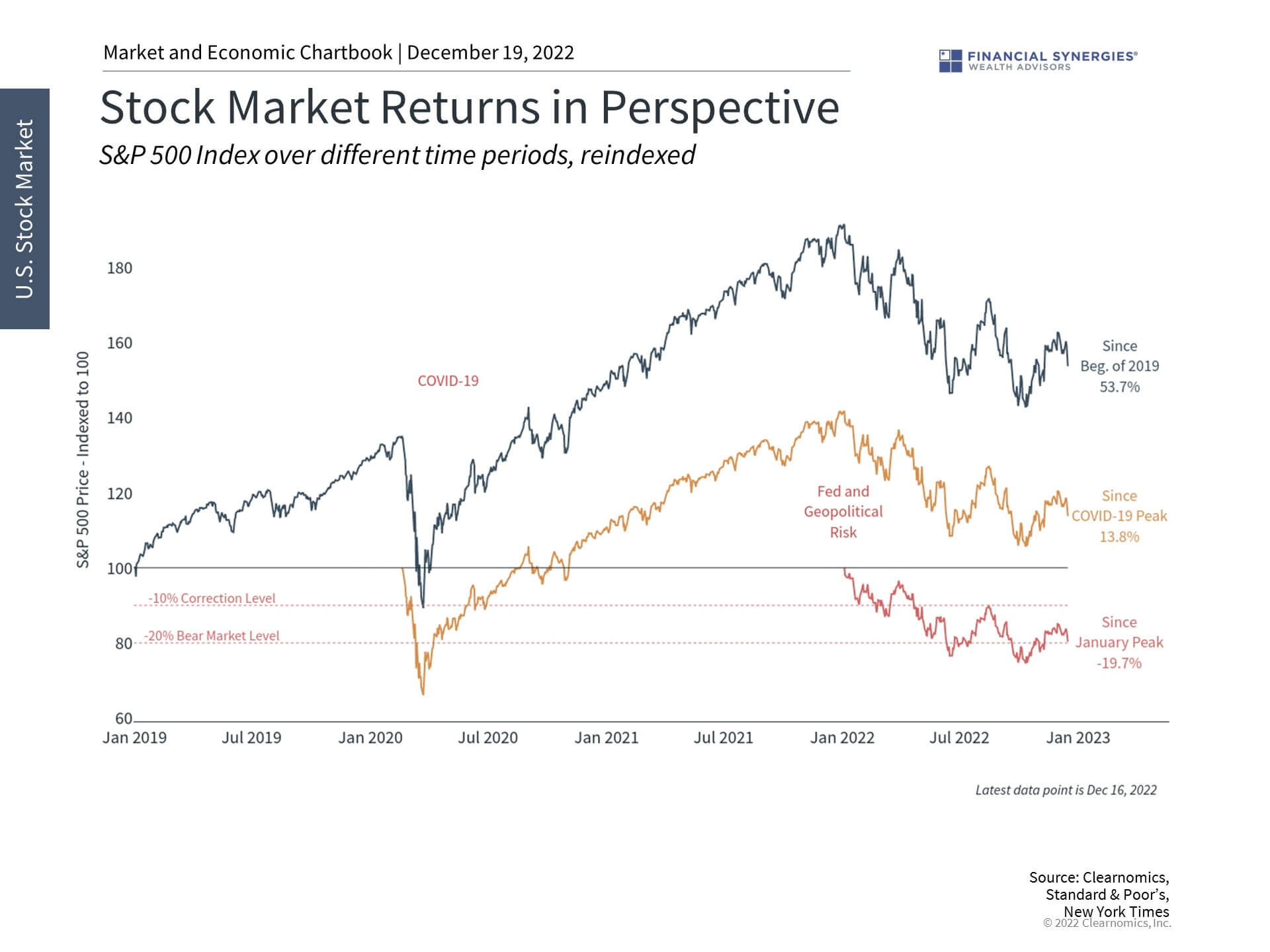 It’s not unjustified for investors to focus so much on the Fed since this past year experienced shifts in the four-decade pattern of falling inflation and interest rates. Since the stagflation of the 1970s and 1980s was reversed through a series of rapid rate hikes under Fed Chair Paul Volcker until the pandemic, inflation had been steadily declining.

This culminated in interest rates reaching the zero lower bound in the U.S. and entering negative territory in places like Europe. In general, this led to an era of relative price stability, the ability to borrow cheaply, and supportive monetary and fiscal policies.

It’s for this reason that the sudden jump in inflation, rates and Fed hikes have been jarring. The first chart above shows that the current rate hike cycle is one of the fastest in history, second only to the rate hikes that began in 1980 when the Fed was also battling inflation. The 1977 cycle is also prominent on the chart as the longest period of sustained hikes, also due to price pressures across the economy. 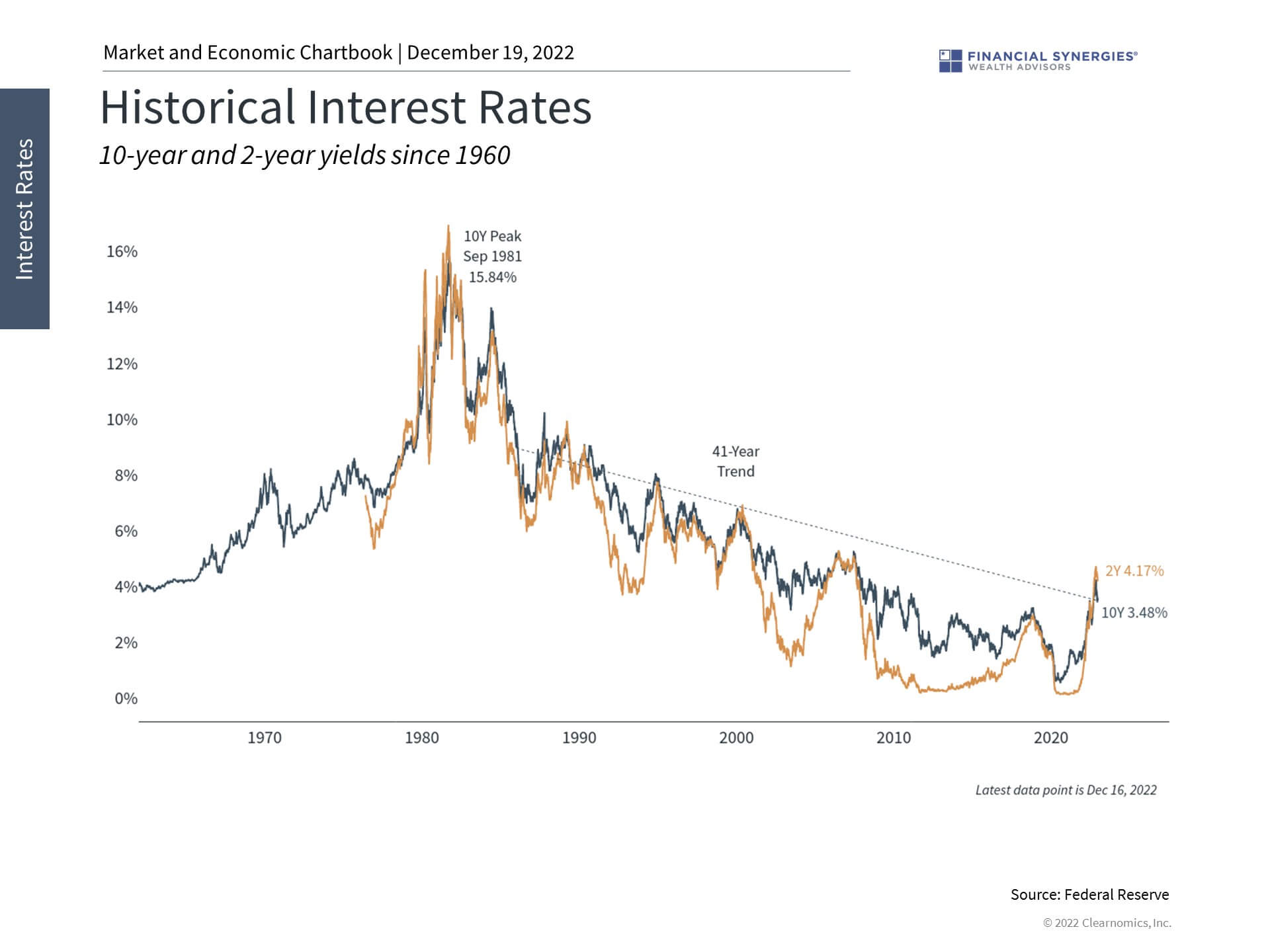 Unlike that era, however, the economy today is still fundamentally stable and the job market is still strong, despite a number of investor concerns. Unemployment is still near historic lows, new jobs are still being added each month at a strong clip, and there are still millions more job openings than unemployed individuals. Some inflation components such as energy prices have improved significantly in the past several months.

Perhaps the biggest concern among economists and the Fed is rising “core” inflation for important expenses such as housing. The Consumer Price Index has experienced an acceleration in “shelter” costs, rising from a low of 0.6 percentage points of total inflation to 2.2 percentage points in October. The fact that most rental lease terms are only renewed once a year means that this data may take time to reflect what households are already experiencing.

Still, most data series have shown that house prices and rental prices have declined from their recent peaks. While this may take time to stabilize, the Fed will likely remain committed to keeping interest rates at a restrictive level through most of 2023.

Rather than try to guess at exactly how these numbers play out, investors ought to stay focused on the bigger picture. There are early signs that inflation is easing, the economy is still stable, and market valuations have improved significantly. Whether the terminal fed funds rate next year is slightly higher or lower than 5% should not significantly change the asset allocations or financial plans of patient, diversified investors, even if it does cause the market to swing in the meantime.

In conclusion, as we look beyond a fed-driven year, we continue to stay disciplined and not focus too much on each individual Fed move or inflation report, in order to be positioned for opportunities and the inevitable rebound.