Is a Weaker Dollar Bad for the Economy?

Generally speaking, the answer is No. But more on that in a minute.

The dollar may be the most important market and economic indicator that is least often discussed. This is because the value of the currency not only reflects economic and policy expectations for the U.S. relative to the rest of the world, but also affects real economic activity. It’s important to understand the dollar’s relationship to the corporate and economic outlook.

From mid-2014 through early 2015, the U.S. dollar appreciated in value by over 20%. This was driven by many factors, including the fact that the U.S. economy was healthy when most regions were still struggling. A stronger dollar made it more difficult for U.S. companies to compete abroad, since this meant that goods and services priced in U.S. dollars suddenly became over 20% more expensive to foreign buyers. This resulted in a drag on U.S. corporate profits and economic growth.

Fast forward to today and the dollar is now in correction territory. The U.S. dollar index (DXY) is below 90, having fallen 13% over the past year. Some of this is political, including comments made by Treasury Secretary Mnuchin at the World Economic Forum in Davos recently – but most has to do with healthy global growth, a reversal of what drove the dollar to rise in 2014.

Some may worry that a weaker dollar reflects a weakening in the country’s global position, and that eventually, dollars will be supplanted by other currencies. While dollar movements always create winners and losers, these concerns are likely to be premature.

The more likely impact is that, just as a strong dollar was a drag on profits and growth, a sustained weaker dollar is positive for the corporate earnings outlook going forward.

Of course, maintaining a weaker dollar without appearing to do so has become a geopolitical form of jujitsu. Many countries have successfully done this for years.

Let’s start with the dollar’s decline.

1. The U.S. dollar is depreciating. 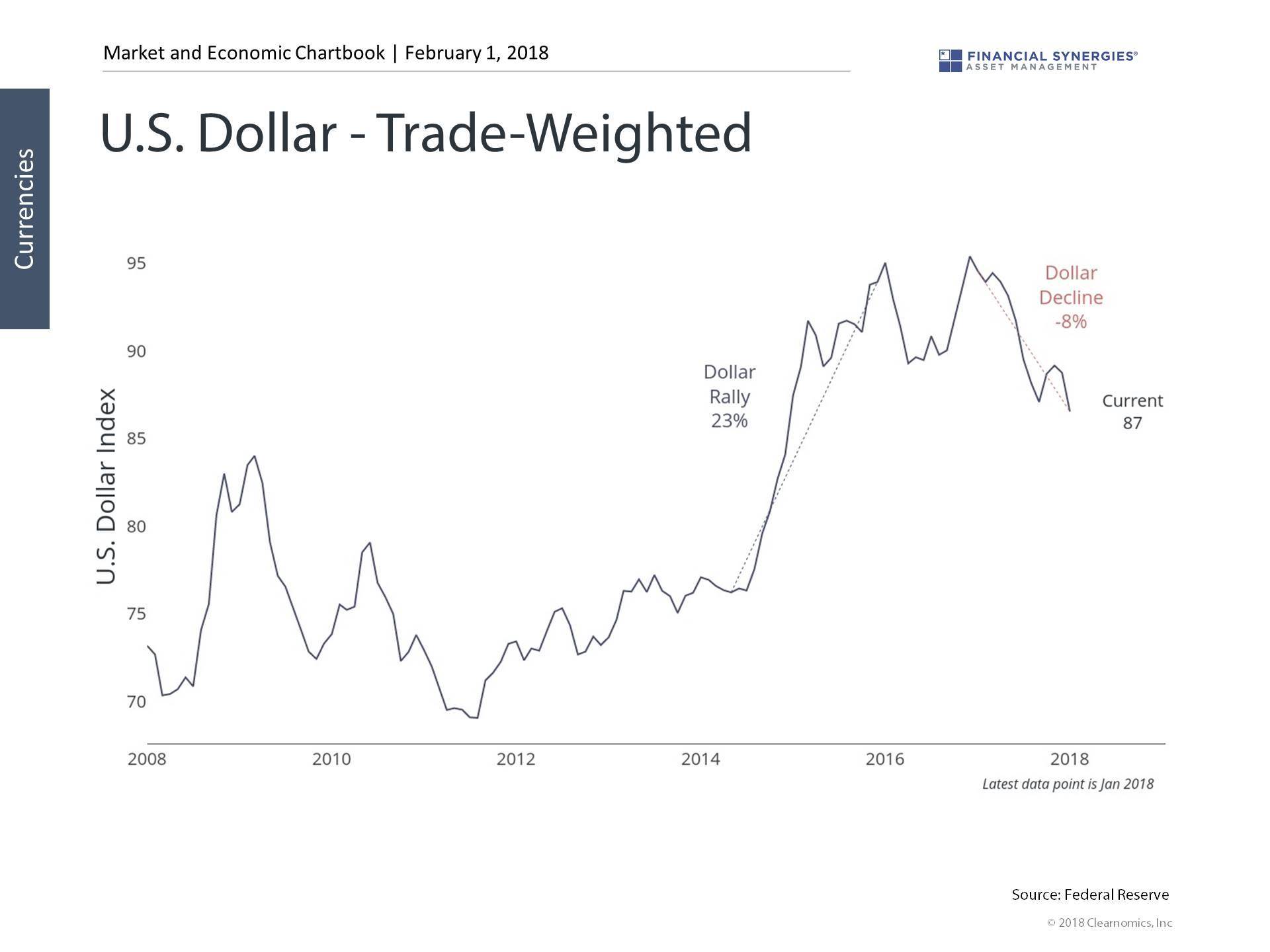 The U.S. dollar strengthened significantly in mid-2014 for a number of reasons: strong U.S. economic growth relative to the rest of the world, expectations of Fed rate hikes and higher interest rates, the plummeting price of oil, and more. This led to a decline in U.S. corporate profitability and acted as a drag on the economy.

Since then, the dollar peaked and has now fallen considerably. On its own, this reversal is likely to be positive for earnings and stocks.

2. Earnings suffered when the U.S. dollar spiked. A weaker dollar should now provide a boost. 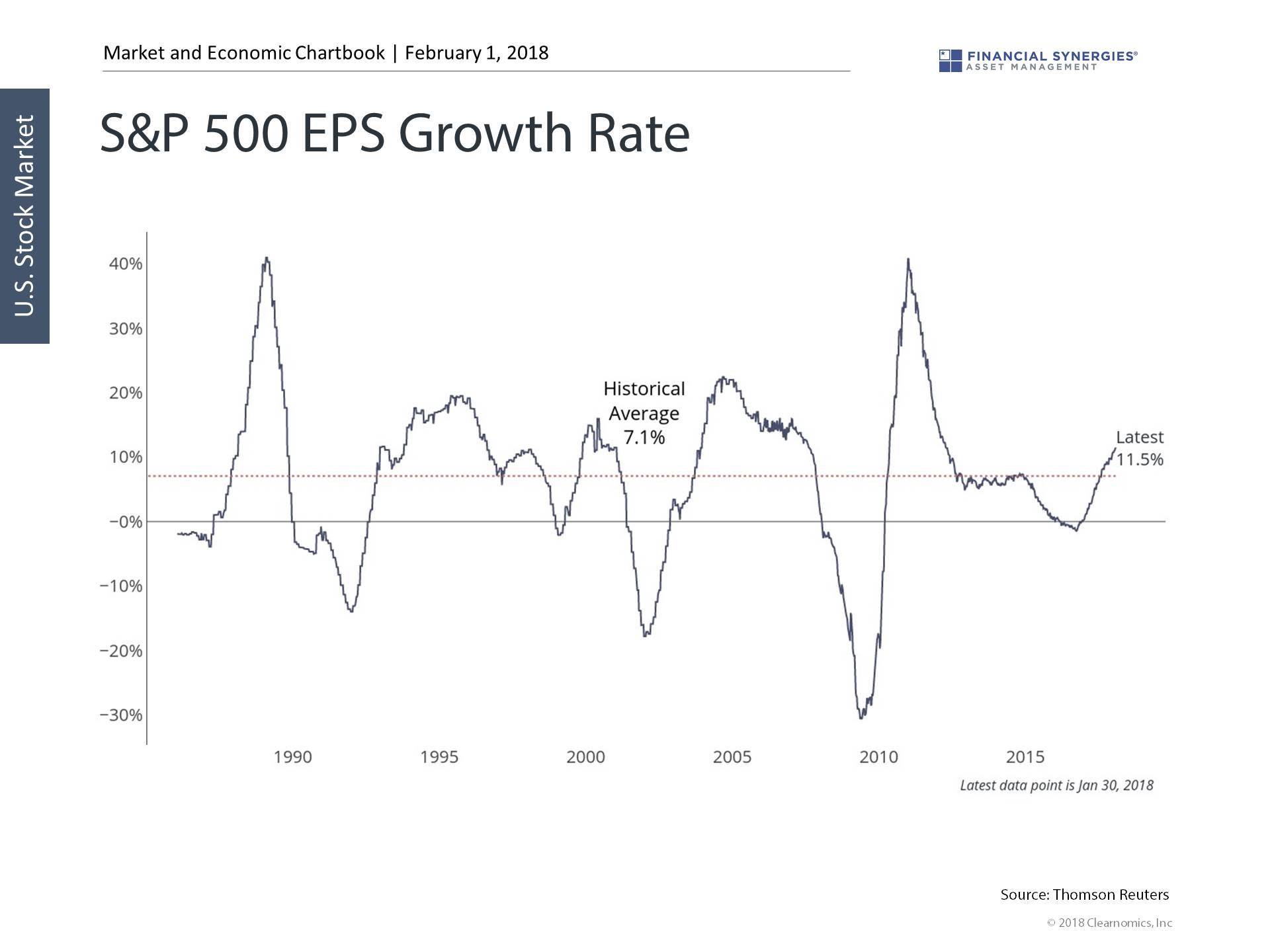 This chart shows the percent change in corporate earnings on a year-over-year basis. The most recent decline in earnings, which briefly fell into negative territory, was partly a result of a strong dollar, described above.

Today, strong global growth and a weaker dollar has resulted in a faster-than-average growth rate in corporate profits. 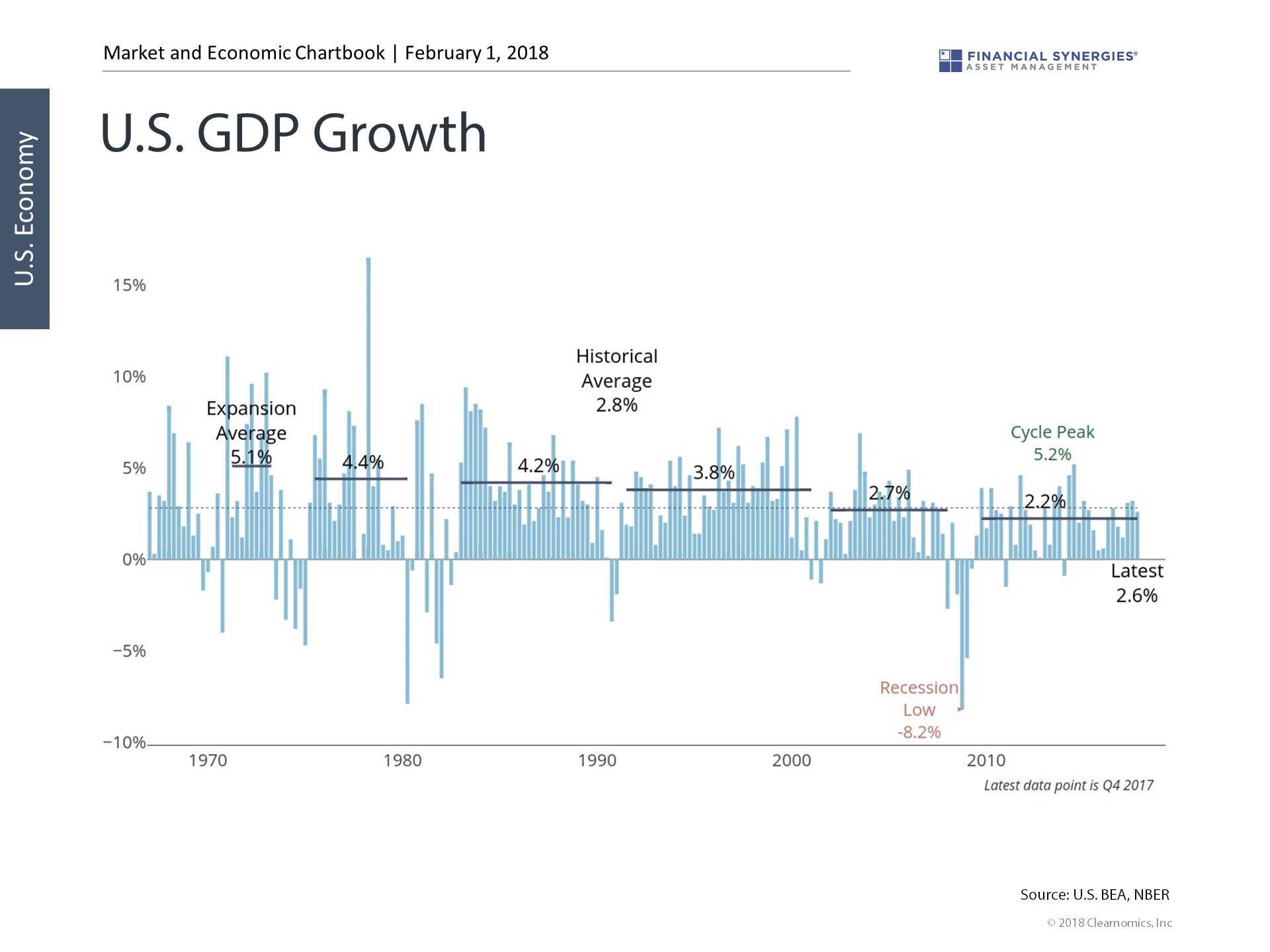 More broadly, the recent GDP report showed that the economy grew by 2.6% in the final quarter of 2017. This was below economist expectations, but is still a solid growth rate for an aging economic expansion. A weaker currency, if it’s sustained, could boost growth in the quarters to come.

What does this all mean for clients? A weaker dollar is generally positive from an investment perspective. While it does hurt clients who need to purchase international assets, including those traveling abroad, it is broadly positive for the U.S. economy.