Last week’s jobs report confirmed what investors and economists already knew: work stoppages around the country due to the coronavirus have led to layoffs, furloughed workers, and a rising unemployment rate. The report showed that 701,000 jobs were lost in the month of March, the worst monthly reading since December of 2008 during the global financial crisis. The unemployment rate also rose from 3.5% to 4.4%, the third largest month-over-month increase since World War II. While this still only puts the unemployment rate at levels seen as recently as mid 2017, it’s clear that this is only the tip of the iceberg.

This is because the unemployment rate and payroll numbers come from surveys of households and businesses conducted by the Bureau of Labor Statistics. These surveys are conducted monthly during a specific week. In March, this occurred during the week of March 8 when COVID-19 was already a major problem in U.S., but official lockdown orders were not yet issued. More recent initial jobless claims numbers tell us that 10 million Americans filed for unemployment benefits over the past couple of weeks. This suggests that the payroll numbers and unemployment rate are actually already much worse.

There are three important considerations for investors when interpreting these numbers. First, these data lag behind what we already know to be the case. It’s not yet clear how high the unemployment rate will rise, although most economists expect it to increase to 10% or higher. Some Fed officials are even expecting 30% unemployment over the next few months. To put these numbers in perspective, the unemployment rate peaked during the global financial crisis at 10% in October of 2009. The exact figures will depend on the length of work stoppages and how successful mitigation efforts are at containing the coronavirus.

Second, given the uncertainty around the public health crisis, the experience of other countries is our best guess at the path forward. Fortunately, there are signs that countries that acted aggressively to contain the coronavirus have been able to return to work. In China, for instance, official accounts suggest that about half of businesses that closed have been able to reopen. As a result, China’s PMI index, an indicator of economic activity, rebounded in March from a steep decline in February. While data from China should often be cautiously interpreted, this is positive for the economy and markets once we are able to get past the peak of the epidemiological curve.

Third, it’s important to distinguish between the one-time hit to the economy from potentially longer-lasting ripple effects. Unfortunately, many have and will continue to lose their jobs as work stoppages continue. If businesses can safely and responsibly reopen and factories can restart in the next couple of months, it’s possible that many Americans can return to work, reversing the jump in unemployment and decline in payrolls. For instance, furloughed workers – i.e. those who are temporarily laid off – could slowly return to work once their furlough periods end. Thus, while the one-time cut to the economy may be deep, it could bounce back over the following quarters.

This is only the case if work can resume and shops can reopen shortly. The longer the crisis lasts, the heavier the financial burden on individuals and businesses. If businesses shut down due to financial distress, there will be no jobs for furloughed workers to return to. This is why the government has pulled out all the stops with both fiscal and monetary stimulus measures to shore up the economy until activity can resume. In effect, the government is placing the economy on life support until it is healthy again.

None of this discussion is meant to minimize the human and societal toll that COVID-19 is causing throughout the country and the world, nor is it to suggest that there will be an immediate snap-back. However, from an investment perspective, it’s important to remember that markets are forward-looking. Although the unemployment numbers will continue to rise, and the payroll numbers continue to fall, this reflects what we already know. If and when the coronavirus is contained, and if government stimulus is successful, workers will be able to get back to work as they have done in other places.

Below are three charts that help to put the latest jobs report in perspective. 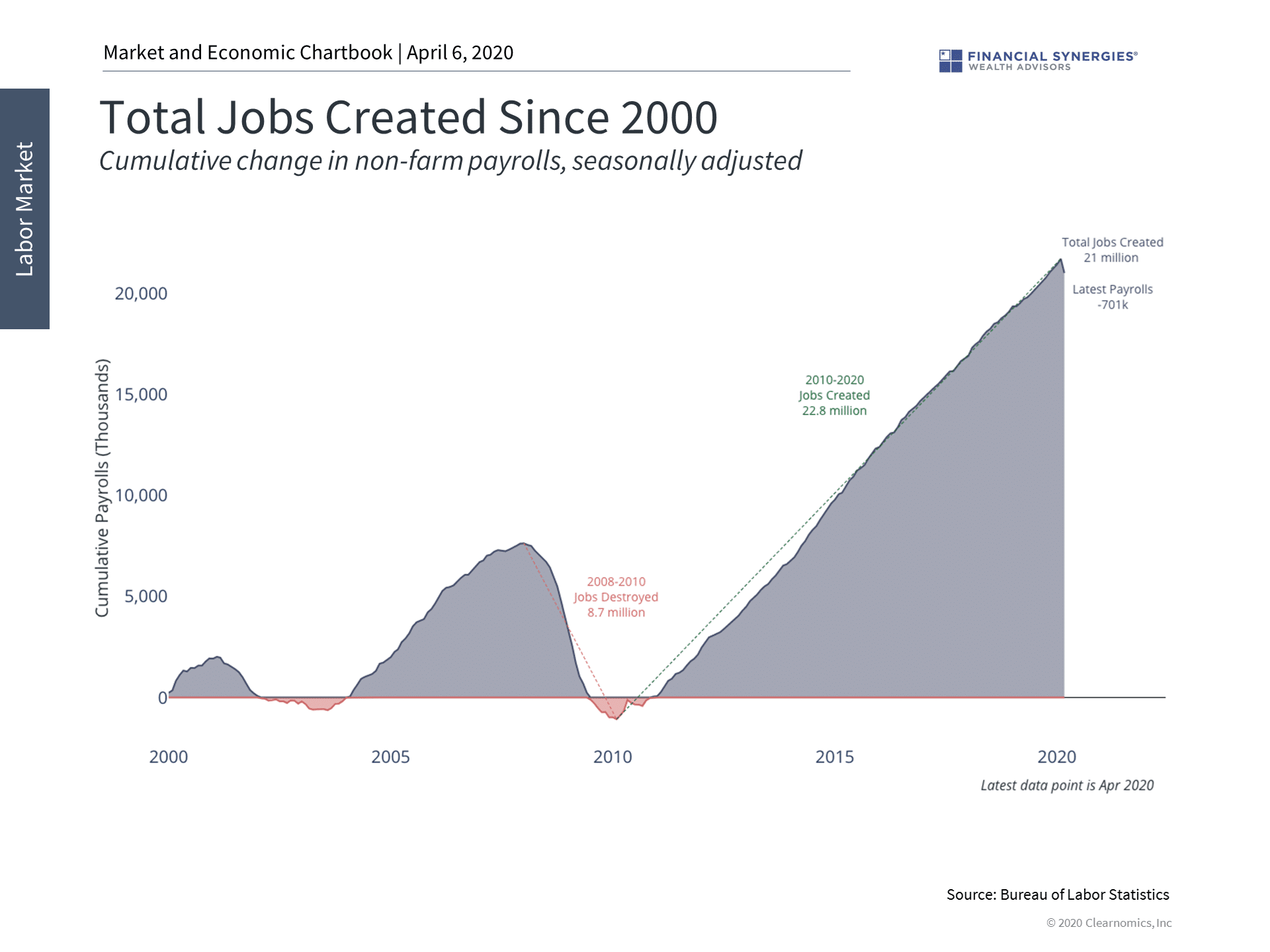 This chart shows the running total number of jobs created over the past 20 years. During the 2008 financial crisis, all new jobs that had been created over the prior decade, and then some, were destroyed. This is because there had been a significant misallocation of resources to the housing and financial sectors.

Since then, about 22 million jobs have been created. Thus, the 10 million workers who filed for initial jobless claims over the past several weeks could be a significant problem that will appear in the data to be released in early May.

However, this time does appear to be different. While there may be imbalances within the economy after over a decade of expansion, the recent decline in jobs is due to temporary work stoppages related to the coronavirus and not problems within the economy. Thus, while investors should expect the numbers to get worse in the coming months, it is still possible for jobs to return once the public health crisis is contained. 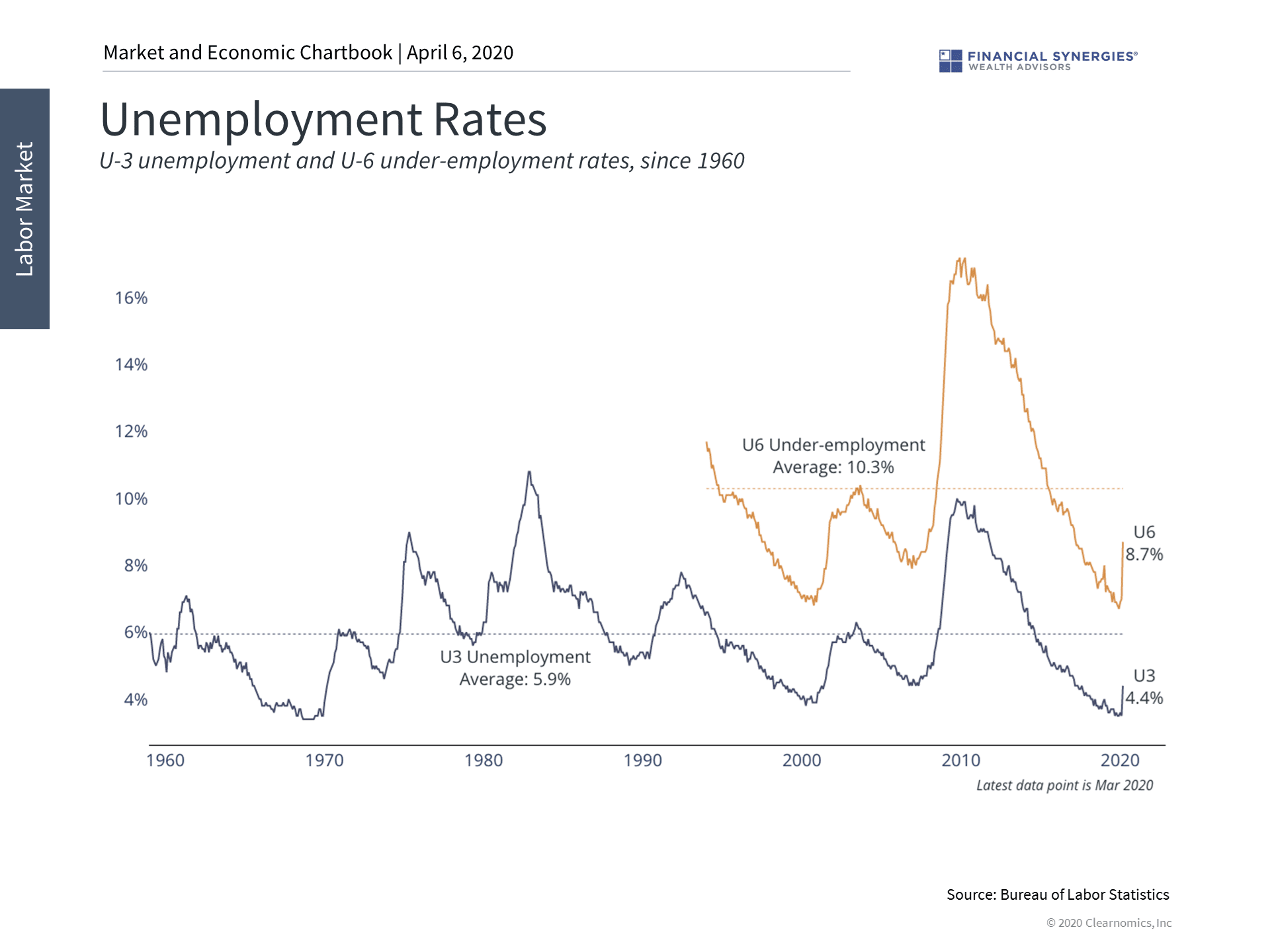 Due to these work stoppages, the unemployment rate jumped from 3.5% to 4.4% in March. This is the third largest increase since World War II, and the largest since 1953.

Unfortunately, we know this number will continue to rise. More frequent data – i.e. weekly jobless claims – suggest that the true unemployment rate is likely to be above 10%. That said, many of these workers may be temporarily laid off and can resume work as long as their businesses remain in good condition. This is why the government is attempting to keep individuals and businesses on economic life support.

3. There are signs that society can return to work once the coronavirus is contained 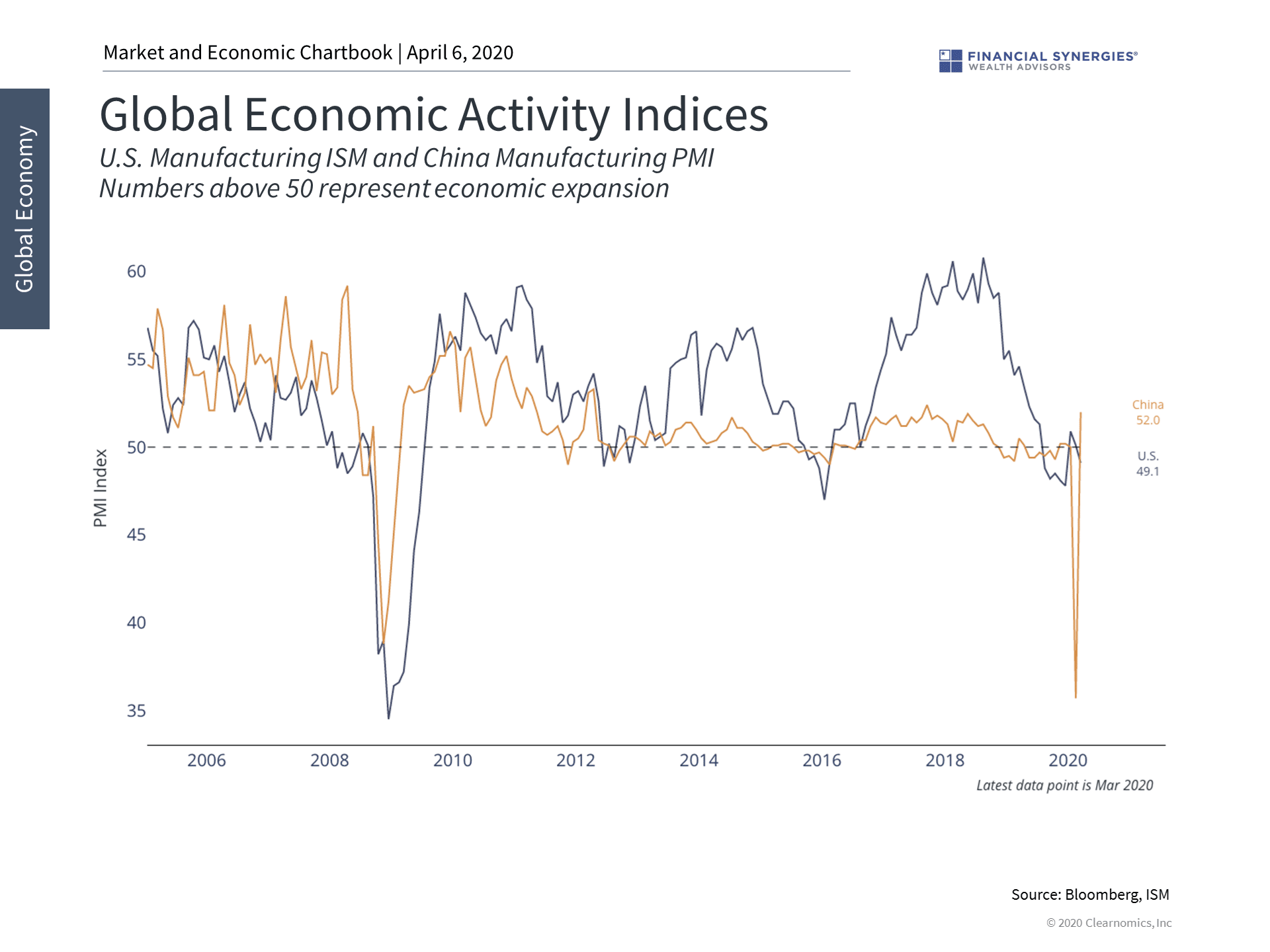 The experience in China, which aggressively quarantined entire cities, suggests that work can resume within a few months of the initial crisis. The chart above shows that their PMI – a measure of economic activity – recovered from a steep fall in February. Of course, the experience in the U.S. will depend on how well mitigation efforts and government stimulus work to cushion the blow to people and companies.

While this crisis is severe for both public health and the economy, we will overcome it. While the numbers will undoubtedly worsen to reflect what we already know, it’s possible that the economy can reopen in the coming months. Markets, which are forward-looking, will likely factor this in long before there is evidence in the economic data.