*Update – Since I wrote this article yesterday, things have escalated quite a bit. Russia has now launched a full-scale attack on Ukraine.

If you’re invested in the stock market, facing periods of geopolitical risk is unavoidable. Headlines on regional and global conflicts can be alarming since they are unlike the typical flow of business and market news. These events are also difficult to analyze and their outcomes challenging to predict. Of course, this doesn’t stop many short-term traders from talking about “buying the invasion,” betting on oil prices, and trying to time the market, nor does it stop market strategists from making bold predictions on how the S&P 500 might react.

In all situations, including geopolitical storms, it’s better to stay level-headed than to try and guess what happens next. How can we stay calm in the face of geopolitical conflicts today?

Recent events concerning Russia and Ukraine are troubling but still evolving. On the surface, Russia is seeking to assert its claim to the Russian-controlled regions of Donetsk and Luhansk, with their forces now entering the region after weeks of build-up and intelligence warnings.

Like the 2014 annexation of the Crimean Peninsula by Russia, these moves violate the sovereignty of Ukraine. The U.S., Europe and NATO allies have responded with plans for sanctions and their own military action, and Germany has also placed approval of the Nord Stream 2 pipeline, which would carry Russian natural gas, on hold. In reality, the true motivation for Russia goes beyond these two statelets and involves decades of tensions since the end of the Cold War.

The current situation adds to the many geopolitical crises this century that have been intertwined with business cycles. These include: the attacks on September 11, the war in Iraq, the so-called Arab Spring, Russia’s annexation of Crimea, periodic North Korean missile crises, tensions between China and the U.S., the U.S.’s exit from Afghanistan last year, and many more.

While each of these episodes is geopolitically impactful, especially when there are humanitarian consequences, this does not always mean there are significant implications for long-term portfolios.

This is because, while markets may react to a variety of news on a daily and weekly basis, what drives portfolios over years and decades is quite different. Over longer periods of time, slow and steady economic growth, corporate performance, and valuations matter much more. This was true during the conflicts mentioned above as well as in the decades following World War II and during the Cold War when there were several long bull markets.

Some events such as 9/11 and the wars in Iraq and Afghanistan that followed were certainly met with market declines. However, these pullbacks coincided with the dot-com crash which was entirely unrelated. Conversely, the various conflicts since the 2010’s including multiple civil wars in the Middle East, Crimea, and the on-going nuclear threats in North Korea and Iran, were against a backdrop of a strong economic cycle.

While there was occasionally short-term market uncertainty, the business cycle is ultimately what drove stock returns. The history of the 20th century across World War II, the Vietnam War, and the Cold War only further underscore this point.

Today’s headlines are occurring during a strong economic expansion and just as the market is reacting to the Fed’s imminent rate liftoff.

Energy prices can be affected by these conflicts since they have tended to involve oil and gas producing regions. This is true today with energy prices rising steadily as Brent crude approaches $100 per barrel. As a member of OPEC+, Russia is an important supplier of oil and natural gas to many parts of the world, notably Europe.

That said, energy prices had already been rising steadily throughout the pandemic recovery and in response to lower-than-expected OPEC+ production. During the 2014 episode in Crimea, there was little direct impact on oil, and even the 2019 drone strikes against Saudi Aramco by Iran and others, which knocked out 5% of global oil production overnight, saw only a short-lived reaction in oil markets. Thus, the direction of energy prices can be difficult to predict.

Of course, the economy and cash flows are not the only factors that affect stock prices. Markets depend on global stability, the rule of law across regions, and business/consumer confidence. Regional conflicts that could involve the United States and its allies can increase the “risk premium” or “discount rate,” to use finance terminology. In theory, even if corporate profits and cash flows are unaffected, the possibility that they could be affected is enough to hurt investor confidence and stock prices. After all, if the world does destabilize, cash today is worth much more than the promise of cash far out into the future.

However, history shows that it’s a mistake to make dramatic shifts in portfolios in response to geopolitical crises. Properly diversified portfolios, especially those built around long-term financial plans, are designed to handle these periods of uncertainty. It’s always the case that markets can swing wildly at any moment, whether it’s due to wars, economic shocks, financial crises, pandemics, and more.

Yes, there can certainly still be losses in a well diversified portfolio. It is never fun. But these losses are temporary. We will weather the storm.

None of this is to dismiss the severity of the current situation in Ukraine from a geopolitical, humanitarian, or regional economic perspective. While these issues will be closely watched, investors ought to avoid passing judgment with their portfolios. Instead, let’s consider these events in a broader economic and market context. Below are three charts that help provide perspective on how geopolitical events affect investors.

1. Geopolitical events can startle markets in the short run 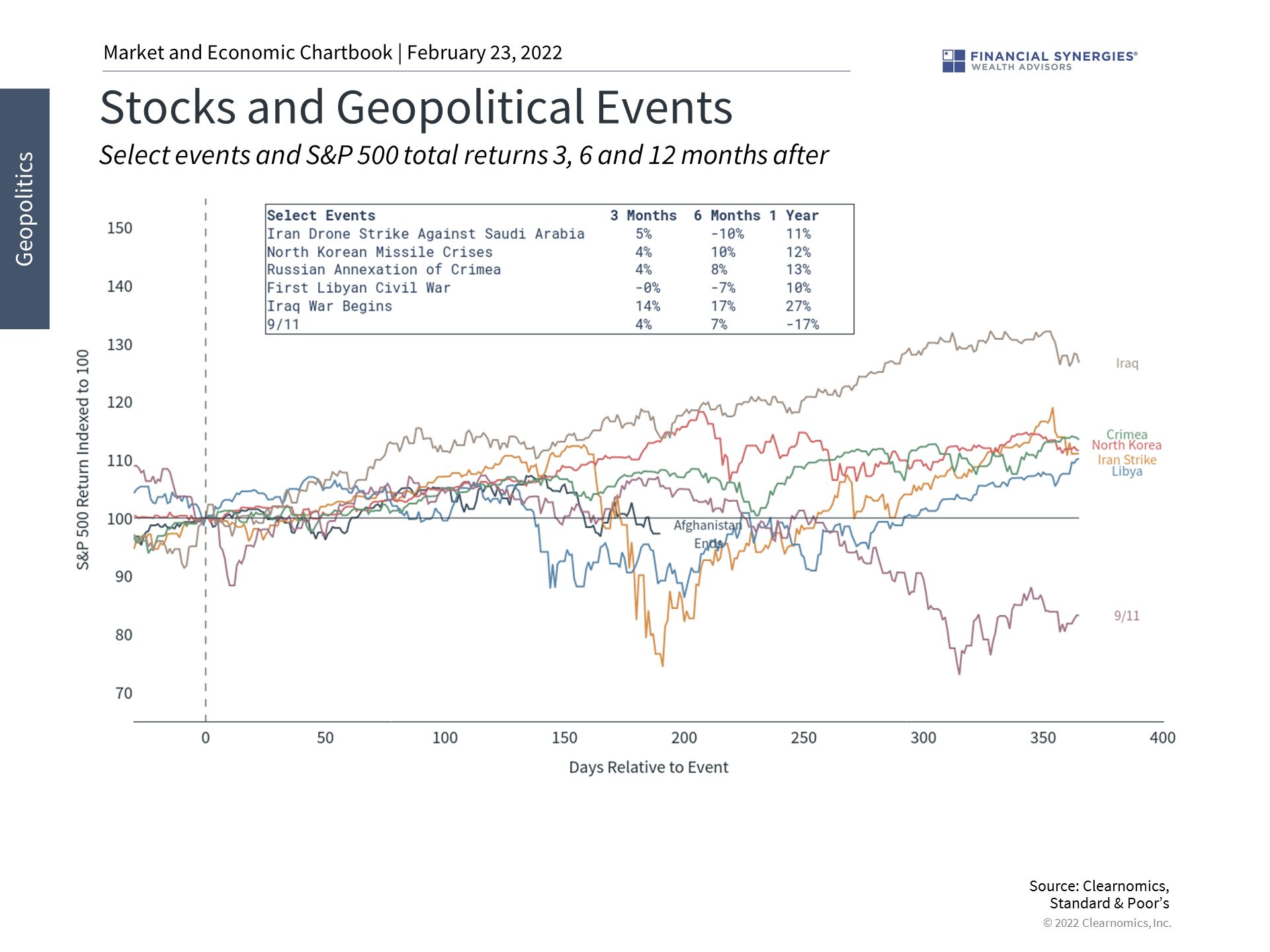 The history of geopolitics and the stock market is mixed. In the long run, markets tend to recover and perform well, primarily because business cycles are what matter over years and decades. In cases like 9/11 and the ensuing wars, markets were down because of bear market conditions already in place.

2. Oil prices have been climbing throughout the recovery 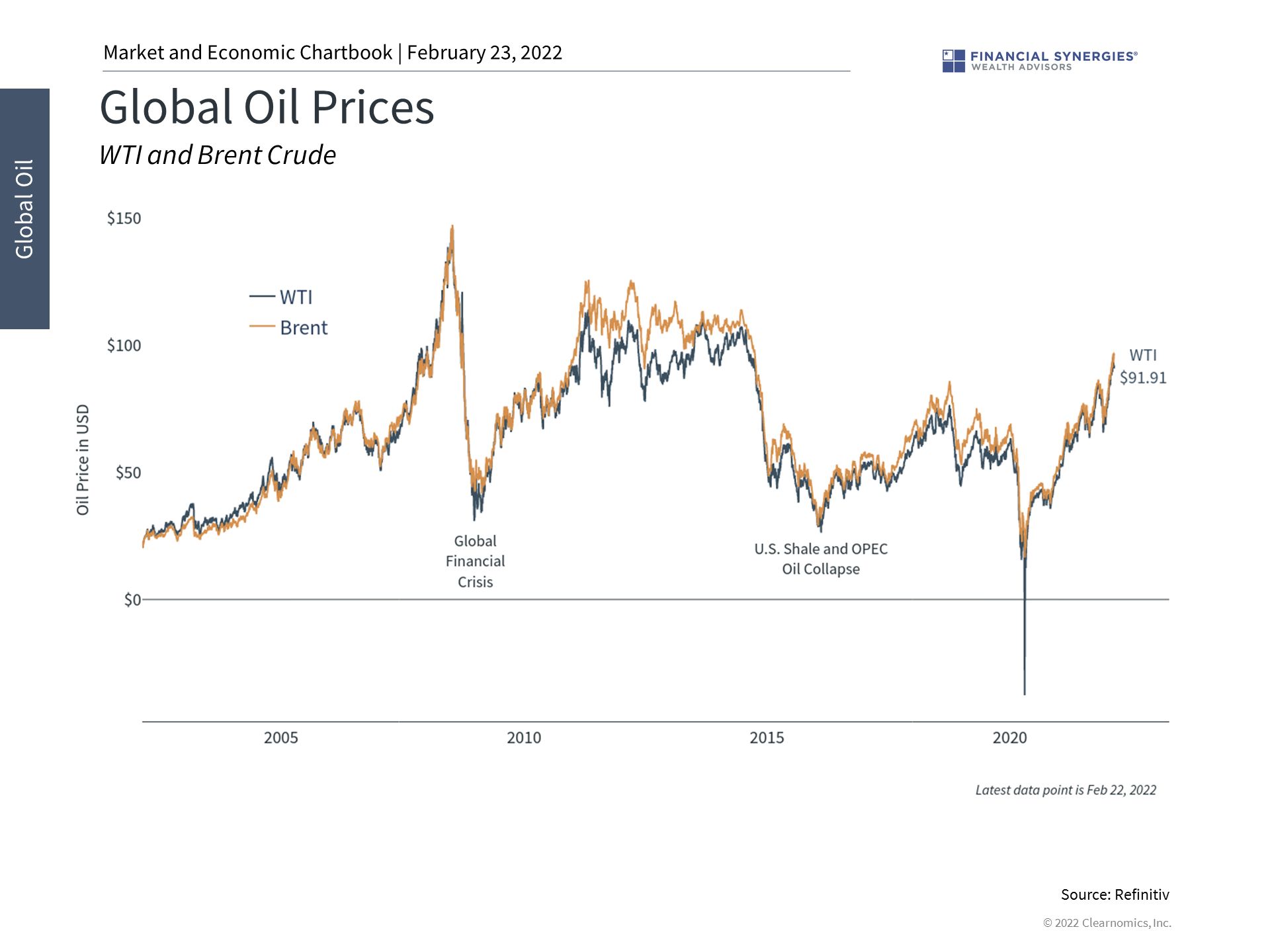 Oil prices have been recovering steadily since they collapsed at the start of the pandemic. While regional conflicts can affect energy prices, history shows that this is neither guaranteed nor are there always long-lasting effects.

3. The stock market has grown despite a century of major conflicts 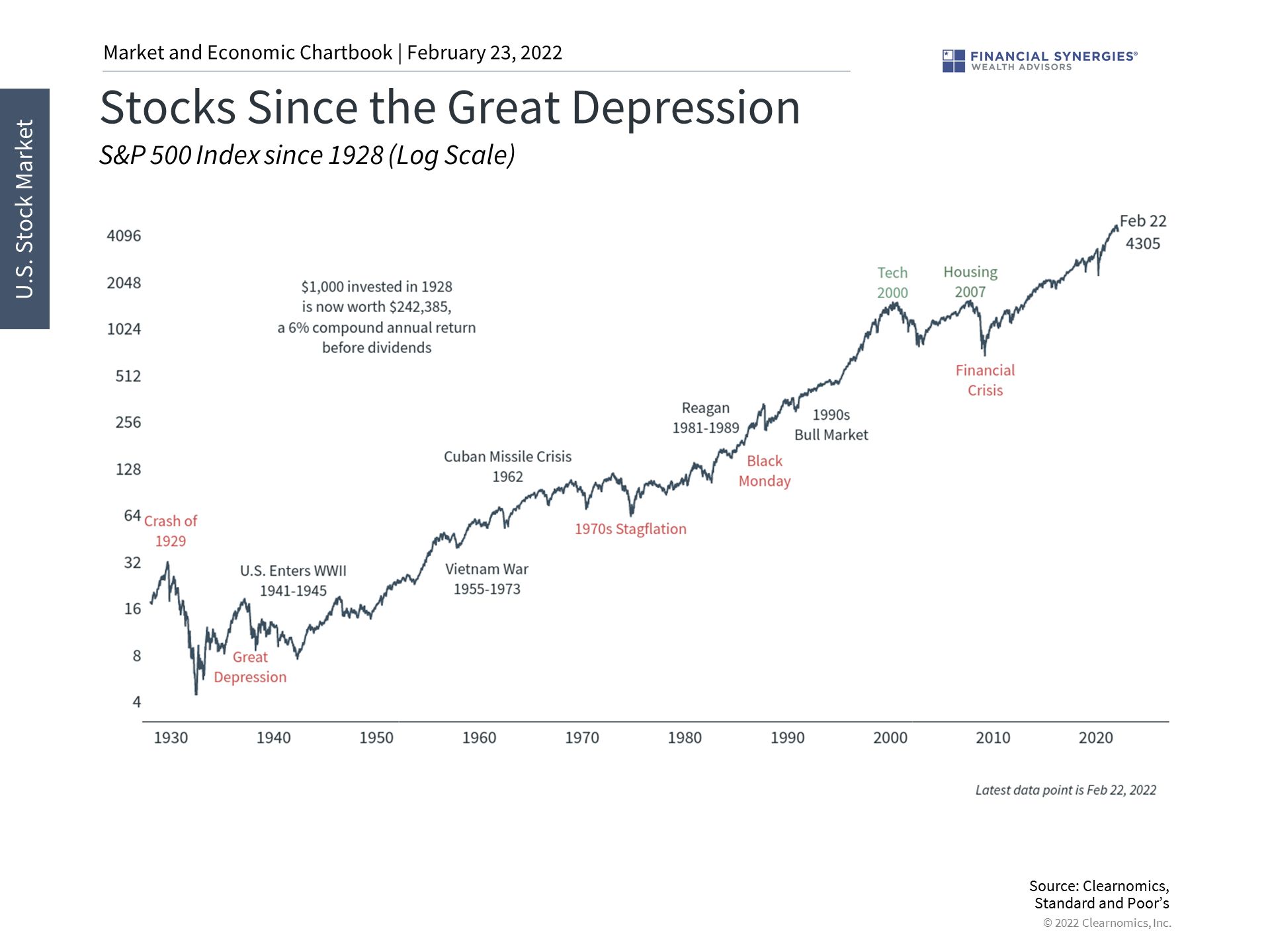 The past century witnessed several major global conflicts including World War II, the Vietnam War, and the on-going tensions of the Cold War. Throughout these periods, the economy and stock market were able to grow steadily. For long-term investors, overreacting to these events would have been the wrong move.

Geopolitical risk is unavoidable when investing over the long run. Stay level-headed and hold balanced portfolios to navigate through the months ahead.