To everyone impacted by the recent (and historic) winter storms, we wish you a swift recovery.

Recent frigid weather across the American South resulted in state emergencies, including in Texas where millions were without power and potable water for several days. And while Texas has an independent energy grid, the disruption to oil production and refineries was felt across global energy markets.Amid ongoing investigations and political finger-pointing, many investors may be asking how this could affect their portfolios.

It goes without saying that energy is the lifeblood of the economy, with global oil demand reaching 100 million barrels per day prior to the COVID-19 crisis. Although there is increasing attention on renewable energy sources, including among investors, fossil fuels still constitute the vast majority of energy use.

Oil and natural gas prices tend to be highly correlated with economic booms and bust, as was seen during the mid-2000’s housing bubble when crude reached historic records and, more recently, during the nationwide lockdown when oil prices plummeted. This latter episode resulted in a negative price of oil when financial investors were forced to pay to get rid of contracts in order to avoid taking physical delivery.

Less than a year later, oil prices have recovered somewhat as the economy has rebounded. These episodes are a reminder that disruptions to energy markets can occur at any time. Challenges facing U.S., Middle East, and other regional producers are always possible. Fortunately, it appears that production can eventually get back on track, inventory levels can cushion the shock, and demand is still relatively weak due to the pandemic.

Longer-term, there are three key ways, among many, in which energy has a mixed impact on diversified investors. First, the performance of the energy sector directly impacts the S&P 500. For instance, the 2014/2015 oil price crash resulted in an 80% earnings decline for the energy sector, causing an “earnings recession” for the overall market. Although this didn’t result in a broader bear market or economic recession, it was certainly felt by investors and those who work in the industry.

More recently, rising oil prices have helped to boost the sector. While earnings are far from their levels prior to 2014, they have climbed significantly from their 2020 lows. This is one reason that energy sector shares have climbed over 20% this year.

Second, higher energy prices are effectively a tax on consumers and businesses. Gasoline prices have been rising steadily since last year with the national average of regular unleaded climbing 80 cents to around $2.50 per gallon. Although many Americans are driving less during the pandemic, higher gasoline prices eventually filter through to all goods and services.

Finally, higher energy prices fuel concerns of rising inflation. While inflation measures usually exclude volatile categories such as food and energy, rapid increases in these prices can make them hard to ignore. So far this year, commodities have outperformed the S&P 500 as an asset class by returning over 9%. There are even those calling for a new “commodities supercycle” – a decades-long rise in commodity prices and production. Whether this occurs has yet to be seen. In the meantime, the increases in prices, demand and supply of oil, metals and agriculture commodities mirror the economic recovery.

It will take time for the dust to settle on the recent disruptions in the South. The ongoing challenges to the energy industry may take time to work out as well, especially for those who depend on it for their livelihoods. In the meantime, investors ought to focus on the longer-run implications of rising energy prices beyond recent headlines. Below are three charts that provide perspective on these events.

1. Oil prices have been recovering steadily since the COVID-19 lockdown began 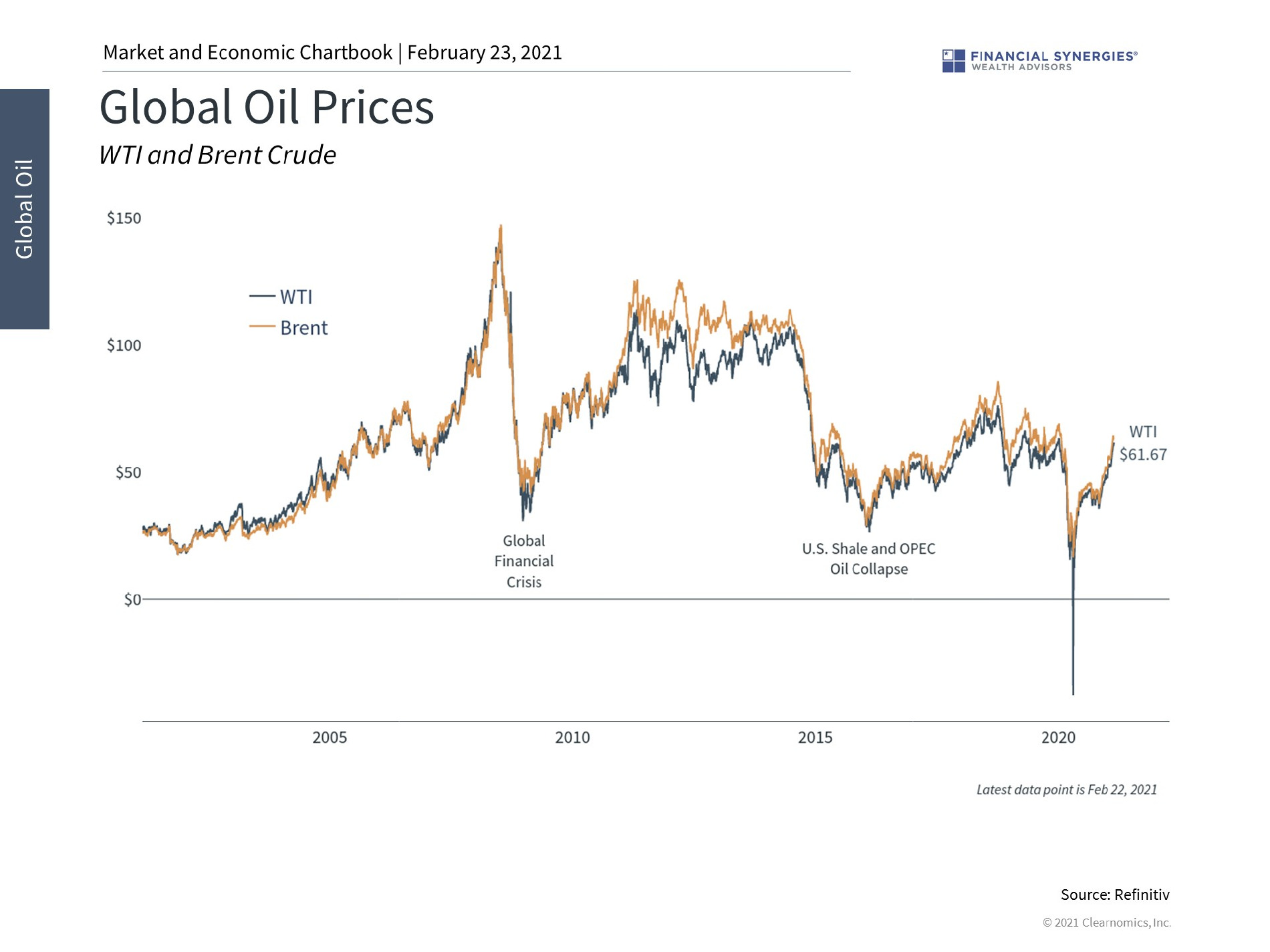 Oil prices have been recovering since they fell into negative territory last year. Recent weather events have disrupted production, pushing prices up further.

2. Oil prices have direct consequences for the energy sector and the overall stock market 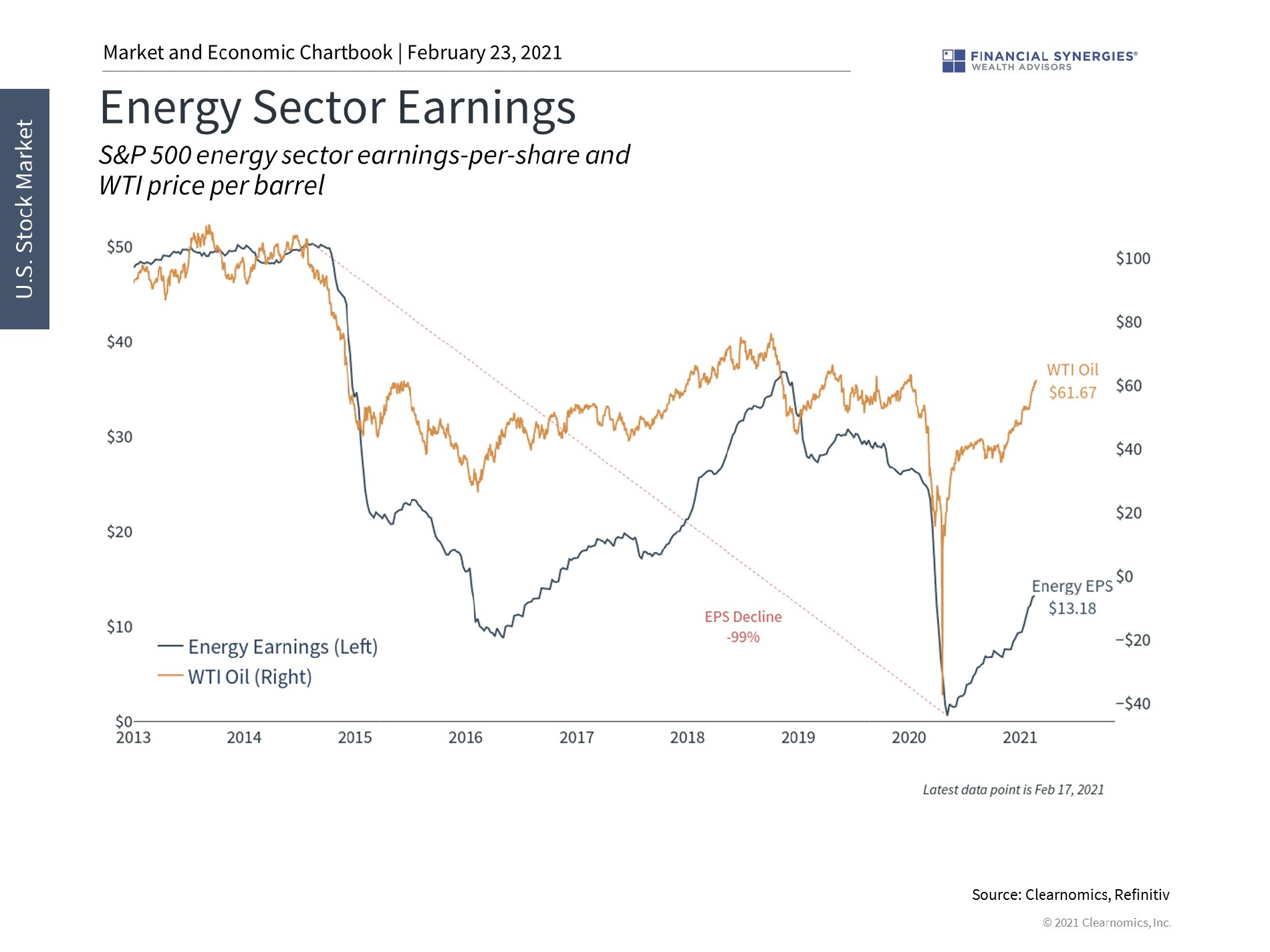 Oil prices directly affect the energy sector which, in turn, impact the overall stock market. This was best seen during the 2014/2015 oil price collapse which resulted in an “earnings recession” for the broader S&P 500. Conversely, higher energy prices have helped to boost the sector.

3. Gasoline prices have been rising, affecting all consumers and businesses 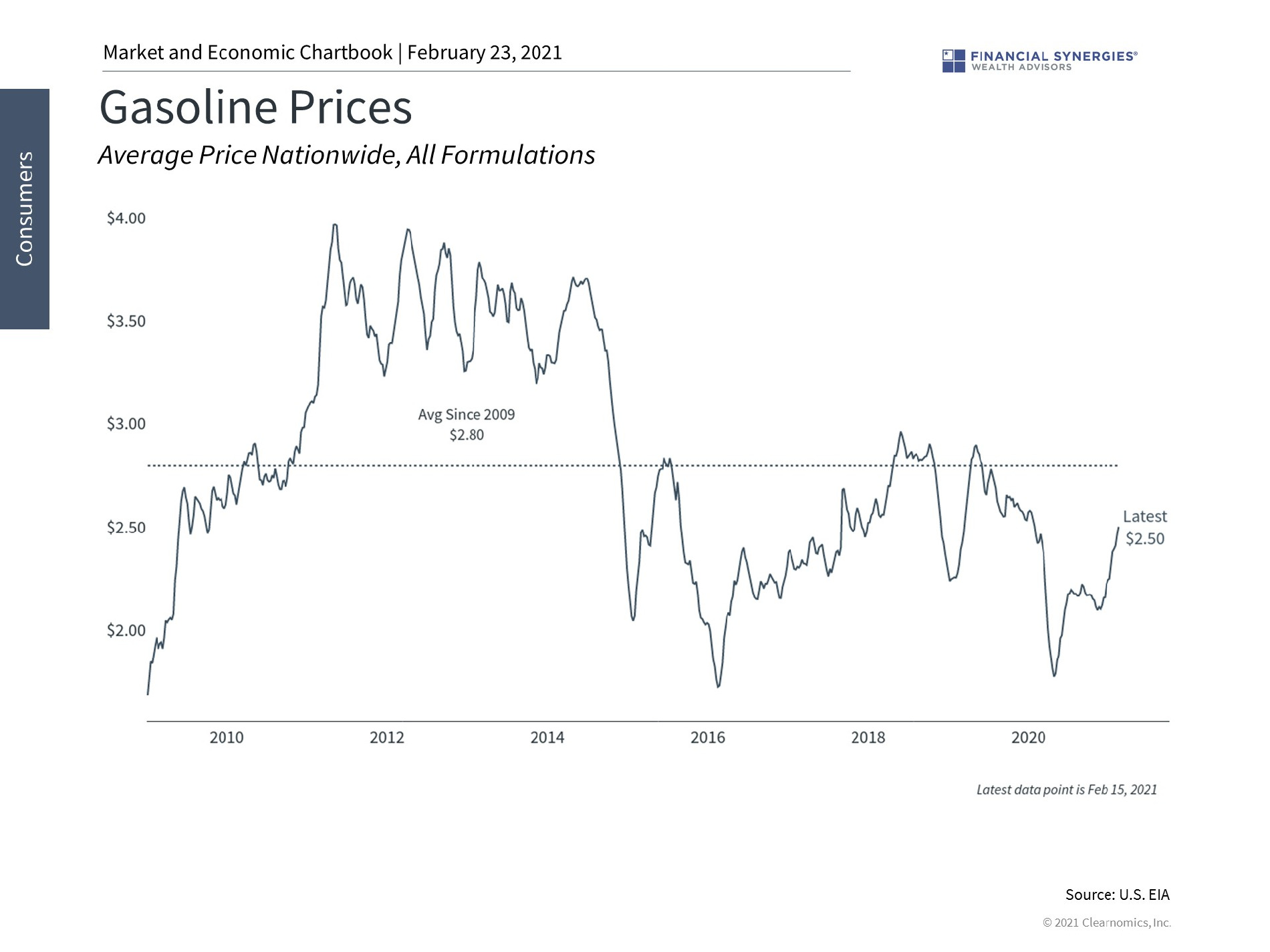 Energy prices, and gasoline specifically, directly impact consumers and businesses. While prices are still below their long-term averages, they have been rising over the past year. This has spurred fears of inflation across the economy.

Energy prices have been rising alongside the recovery economy, but it’s important to stay focused on the longer-term impacts of energy rather than short-term disruptions.