As confirmed COVID-19 cases continue to accelerate in the U.S. and around the world, work stoppages have also increased. The resulting strain on the economy from layoffs, furloughed workers, reduced productivity, and consumer spending is beginning to appear in the data. Last week’s initial jobless claims number surged to historic levels many magnitudes larger than during the 2008 global financial crisis. And while many businesses are shut down or operating at reduced capacity, and workers are stuck at home, many bills still need to be paid. What should we expect from the economic numbers as this situation continues?

In normal times, interpreting economic data is like hitting traffic on the highway. The only information you have is that cars are slowing. From this, you might try to make an educated guess as to the cause by considering the time of day, weather conditions, road construction, whether there are sirens up ahead, etc. Similarly, we often try to deduce the underlying economic conditions from data releases. If initial jobless claims were to spike from around 220,000 per week to 3.3 million, we would know that there is something seriously wrong.

If instead your GPS had warned you of a traffic accident up ahead, there wouldn’t be much need to guess. In fact, you would expect traffic to slow to a crawl and could plan accordingly. In many cases, you would anticipate that the road would open back up once you passed the site of the accident. While this knowledge doesn’t help you avoid traffic, it does help you to set expectations and handle the situation safely and appropriately.

At the moment, we know the economic data will get much worse.

Be prepared – many news headlines will describe upcoming job market, manufacturing, consumer spending, and GDP numbers as unprecedented. Unemployment will spike, with some economists predicting double-digits, and GDP growth will plummet to recession levels. There will be a great deal of gawking, hand-wringing, and commentary as to what it all means.

After all, in the U.S., we simply aren’t accustomed to abrupt work stoppages except on a local basis due to union walkouts or natural disasters like blizzards and hurricanes. But just as in those cases, work often resumes once the underlying conditions are resolved. We simply need to make sure that households, businesses, and the broader economy can make it past the site of the accident.

So, how does one set expectations and plan accordingly when we already know the economic outcome?

First, governments around the world have pledged to do “whatever it takes” to not only contain the coronavirus but to ease the economic burden on businesses and households. The $2 trillion stimulus bill passed by Congress last week is an attempt to help limit short-term financial stress until work can resume. It contains provisions for stimulus checks to Americans based on income limits, expanded unemployment benefits, forgivable small business loans, a moratorium on evictions, and more.

Additionally, the Fed has not only pushed rates to zero, but is rapidly expanding its balance sheet through asset purchases, just as it did during the global financial crisis. All parts of the government are attempting to prevent a small accident from becoming a multi-car pile up.

Second, it’s more important than ever to stay properly diversified. Throughout this crisis, balanced portfolios have outperformed and provided a much smoother ride. This is especially the case since it’s still unclear what the path of confirmed COVID-19 cases will take in the U.S. and other parts of the Western world. Staying patient in heavy traffic, especially in a safe and reliable car, is often the best approach. Trying to swerve in and out, or to cleverly navigate surface streets, is often counterproductive.

Unfortunately some investors learned this the hard way last week, as the market rebounded at an historic pace. Those that cashed out missed the uptick.

Ultimately, it’s clear that the economy will slow significantly for a period of time. This is unavoidable given the nature of stopping the coronavirus. The big question will be whether this creates financial distress for individuals and companies in the meantime. Strong balance sheets, government stimulus measures, and public support in heeding health officials’ guidance can all help to ensure that a public health problem doesn’t result in a long-term solvency crisis.

Below are three charts that help to put recent economic data and news in perspective. 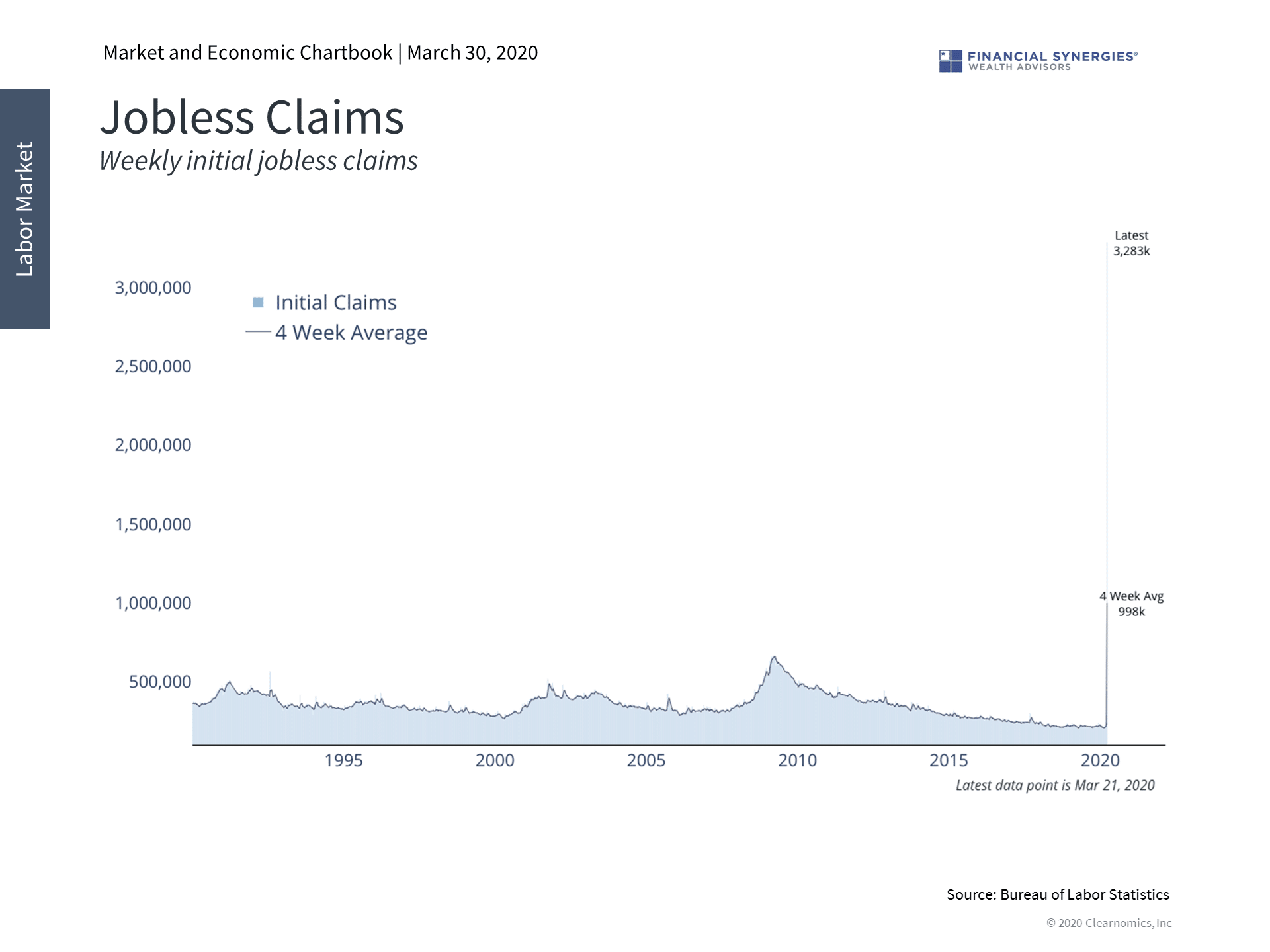 Last week’s initial jobless claims number rose to 3.3 million – the highest ever by a mile. Initial jobless claims ticking up to 282,000 the week before had already drawn attention. Still, this increase is to be expected given the underlying public health and economic situation. Similar numbers will likely be seen in upcoming jobs reports and GDP figures.

2. The Federal Reserve and Congress are stimulating the economy 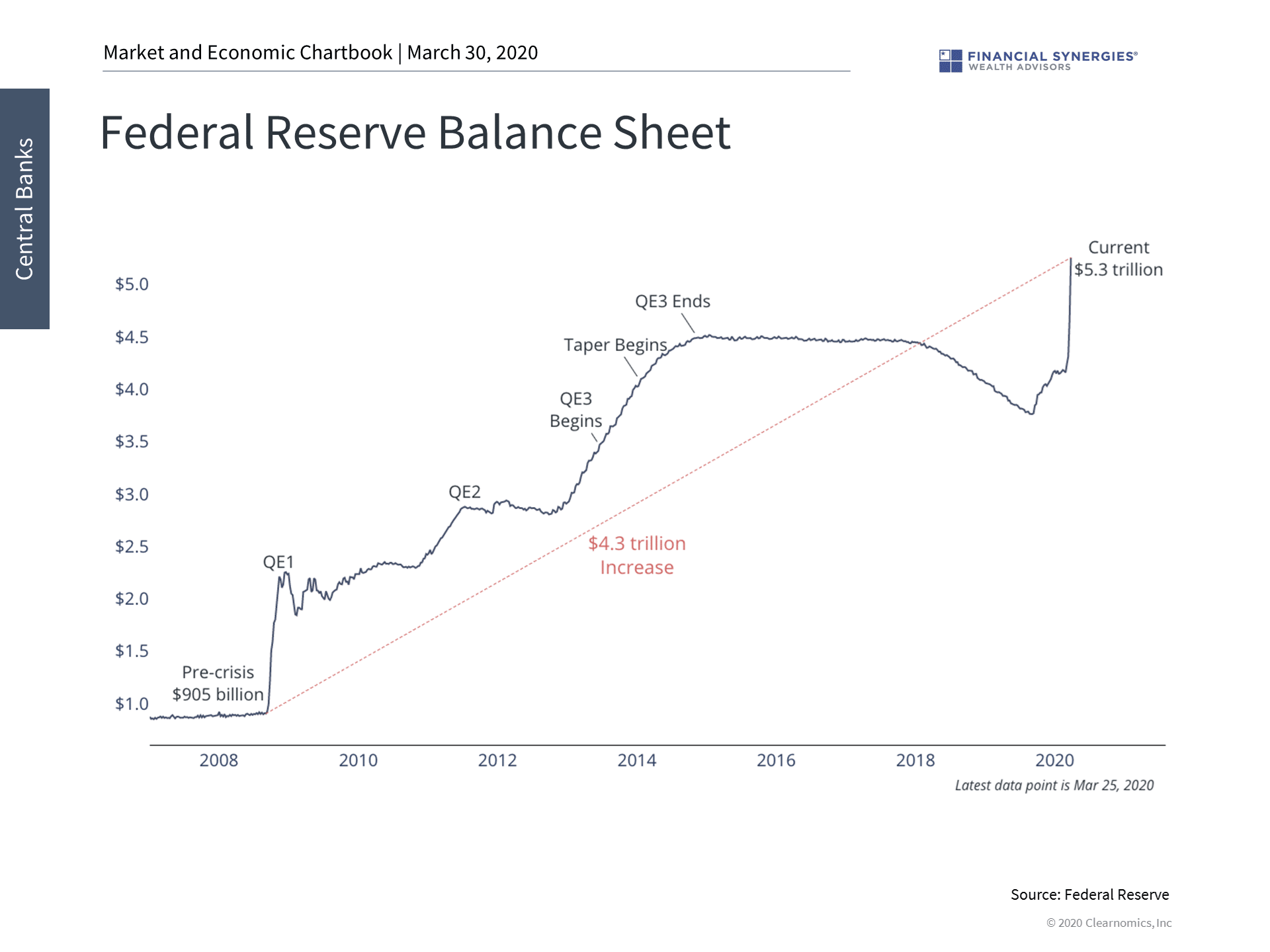 Congress passed a $2 trillion stimulus bill last week, the largest in history, in addition to other measures that have already taken place, to support the real economy. Similarly, the Fed has pulled out all the stops by expanding its balance sheets with open-ended asset purchases to support financial markets. This is financial crisis-era quantitative easing – i.e. asset purchases – but at a much larger scale. The goal of these government actions is to help ease the strain on the economy over the next few months. 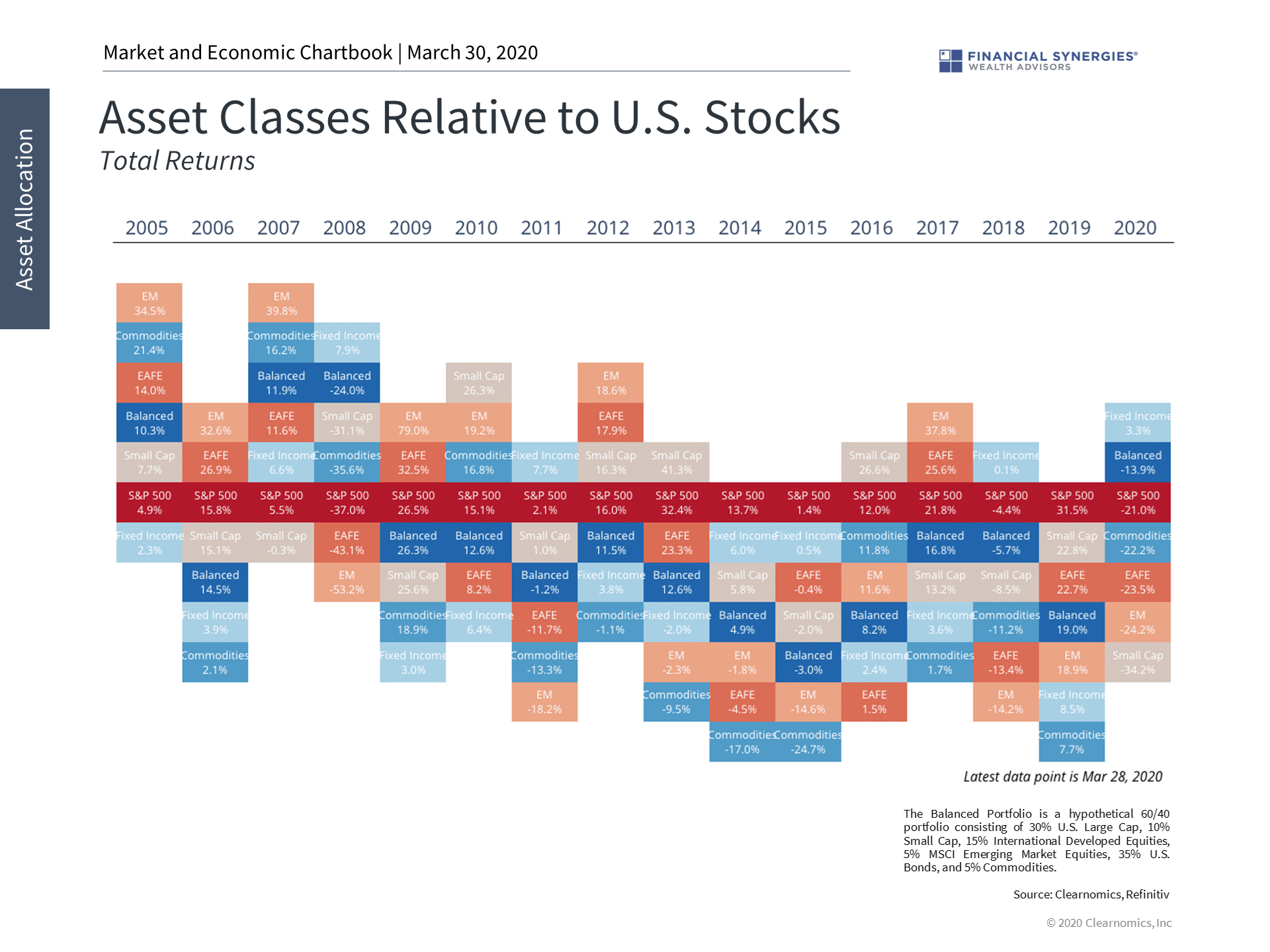 Throughout this period, balanced portfolios have done better than stocks alone. This is because bonds – especially long-term U.S. Treasuries – have outperformed as interest rates have fallen to new lows. This is exactly what balanced portfolios are designed to do across all phases of the market cycle.

It’s not typically the case that investors know the true cause of an economic slowdown. Planning accordingly and watching government stimulus measures to reduce short-term financial stress will be important over the next few months.