A Tiny Country in the Eurozone

The Greek drama just won’t end. The banks have been closed and cash withdrawals from ATMs are now limited to 60 euros per day. The country is a mess and is, unfortunately, the primary cause of recent global market volatility.

Greece is the weakest link in the 19-nation Eurozone; on June 30th it failed to make a scheduled debt repayment of 1.5 billion euros to the International Monetary Fund (IMF). Practically speaking Greece has defaulted, although the IMF refers to the current situation as being in “arrears.”

Depending on how upcoming negotiations progress between Greece and other European leaders the financial lifeline will either be extended to Greece or they will be cut off entirely.

If Greece officially goes into default there will be serious consequences to the country’s economy and their relations with the rest of the world. As we’ve seen, defaulting can upset financial markets and create uncertainty for other lenders. However, Greece represents less than 2% of the European Union’s GDP, so even if it were forced to exit the union it would not tear it apart.

Other countries in the Eurozone that have gone through their own crisis, such as Portugal, Ireland, and Spain, have taken drastic steps to overhaul their economies and are much less susceptible to market contagion now. And the European Central Bank has further bolstered the financial system by purchasing large amounts of government bonds, making all euro nations less sensitive to market swings. 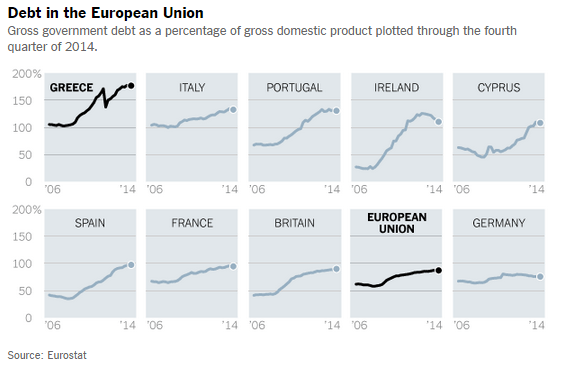 Since Greece’s debt crisis began in 2010, most international banks, including major U.S. banks, and investors have liquidated their Greek bonds and holdings so their direct exposure to this crisis is minimal.

European leaders have had five years to prepare for and establish safeguards against the financial contagion that could occur if a country like Greece has to exit the currency union. The EU is in a much stronger position than it was during the height of the debt crisis just a few years ago, and many experts surmise that a forced Greece exit would not be so catastrophic over the long-term.

As they say, you are only as strong as your weakest link. Greece is certainly that link in the Eurozone, so maybe it’s time to go. We’ll find out soon enough.