Can the Economy Recover Without More Government Stimulus?

After last week’s failed Senate vote on a new pandemic stimulus bill, negotiations between the White House and Congress appear to have stalled. Although the stock market has fully rebounded and the economy is recovering from the nationwide COVID-19 shutdown, not all consumers and businesses have fared equally well. At this point, expanded unemployment benefits have run out, stimulus checks have long since been cashed, and funds from the Paycheck Protection Program for small businesses have already been spent. It’s natural for investors to wonder whether the economy can recover without additional government support.

It will be quite some time before economists know the precise effect of the first stimulus bill (the CARES Act) on consumer and business spending. It’s likely that government spending helped prevent an even worse crisis by helping to keep many individuals and small businesses on life support. However, there are also signs that many parts of the economy may have recovered anyway.

For instance, the data since May clearly show a rebound in hiring activity and retail sales. However, this coincided with the reopening of many parts of the country. The number of Americans filing for new jobless benefits has fallen significantly since it peaked at almost 7 million in late March. And although there are still over 13 million Americans receiving unemployment checks each week, this is far lower than in April when 25 million were out of work.

Many of those receiving unemployment benefits were most likely furloughed or temporarily laid off and have been called back to work. So, although stimulus funds such as the Paycheck Protection Program may have helped, especially in industries that are still struggling, there seems to be more to the story.

Retail sales also turned on a dime by jumping in May after a sharp decline in April. Although it’s very possible that stimulus checks helped, it’s also possible that spending rose as parts of the country reopened. The fact that the savings rate follows the opposite pattern – Americans saved a whopping 33.7% of their paychecks in April – shows that spending can’t and won’t occur if individuals are worried about the economy and if stores are closed, whether or not they have a government check in hand. What stimulus checks can certainly do is to help provide additional financial stability when the situation seems dire.

Unfortunately, surveys suggest that consumers are still feeling uneasy about economic conditions. In particular, measures of consumer expectations of the future are still extremely low which is understandable given fears of a second wave, on-going economic uncertainty and the upcoming presidential elections. This is one area where a concerted government effort could help to improve consumer confidence.

Of course, there is no free lunch – the flip side to government stimulus is the growing national debt. This year’s budget deficit for the fiscal year that ends in September will likely balloon to the largest level in modern history. Although there may be long-term consequences, it’s understandable that Congress and the Fed did everything they could to keep the economy and financial system afloat. Historically, deficits grow significantly during recessions and times of war and then contract during economic expansions.

Ultimately, the economy needs to find its own footing in order to resume its growth trend and support the stock market. Although government stimulus may have helped, especially during the dark hours of March and April, it can’t keep businesses, hiring and consumer spending afloat indefinitely.

Below are three charts that shed light on the on-going economic recovery.

1. Those seeking unemployment claims have plummeted as businesses have reopened 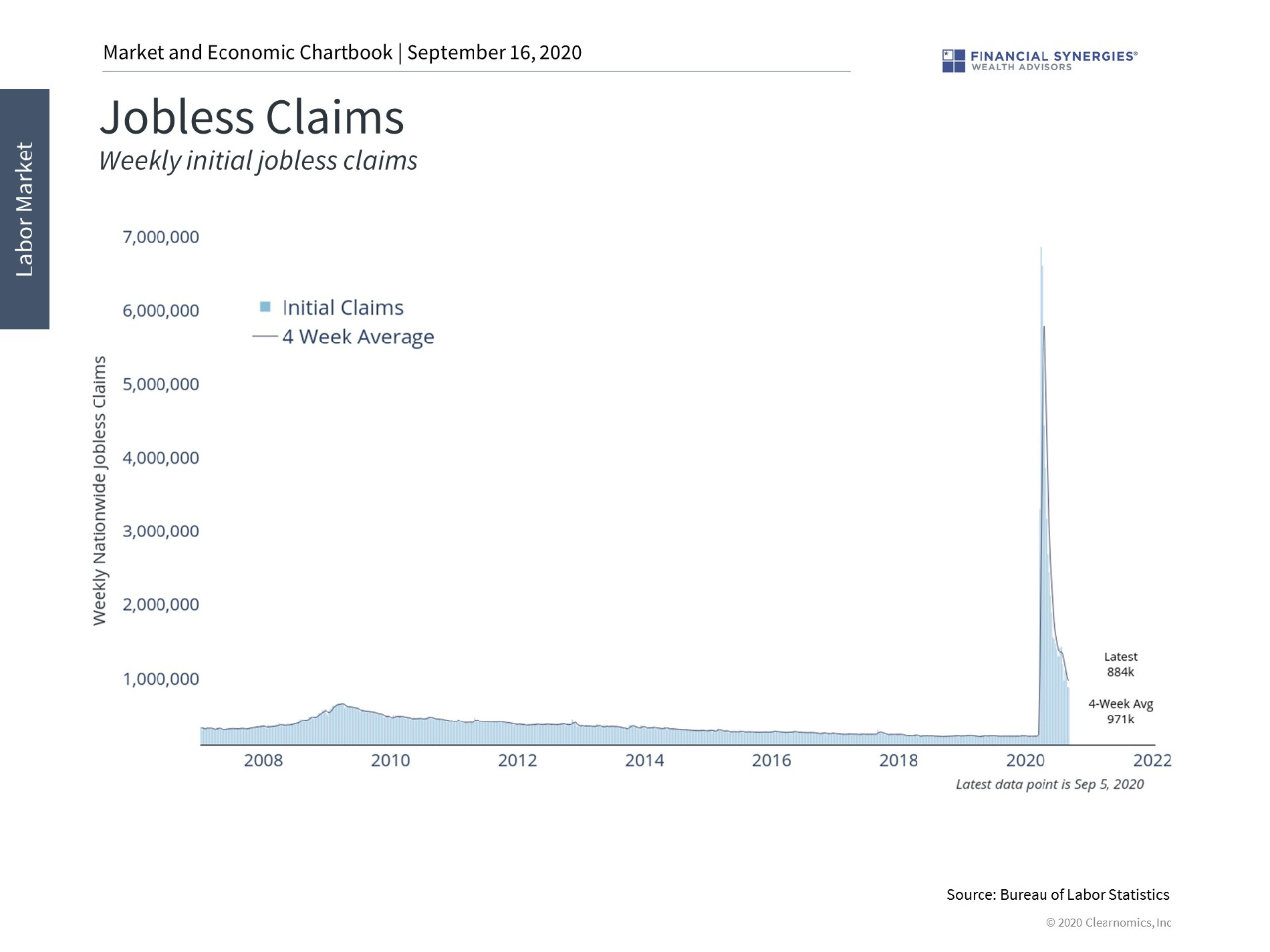 Jobless claims have fallen significantly since the country began to reopen after the COVID-19-induced nationwide shutdown. Initial jobless claims (those filing for unemployment for the first time) peaked at almost 7 million Americans but has since fallen under 1 million. Many are still out of work but this data suggests that the situation is slowly improving. 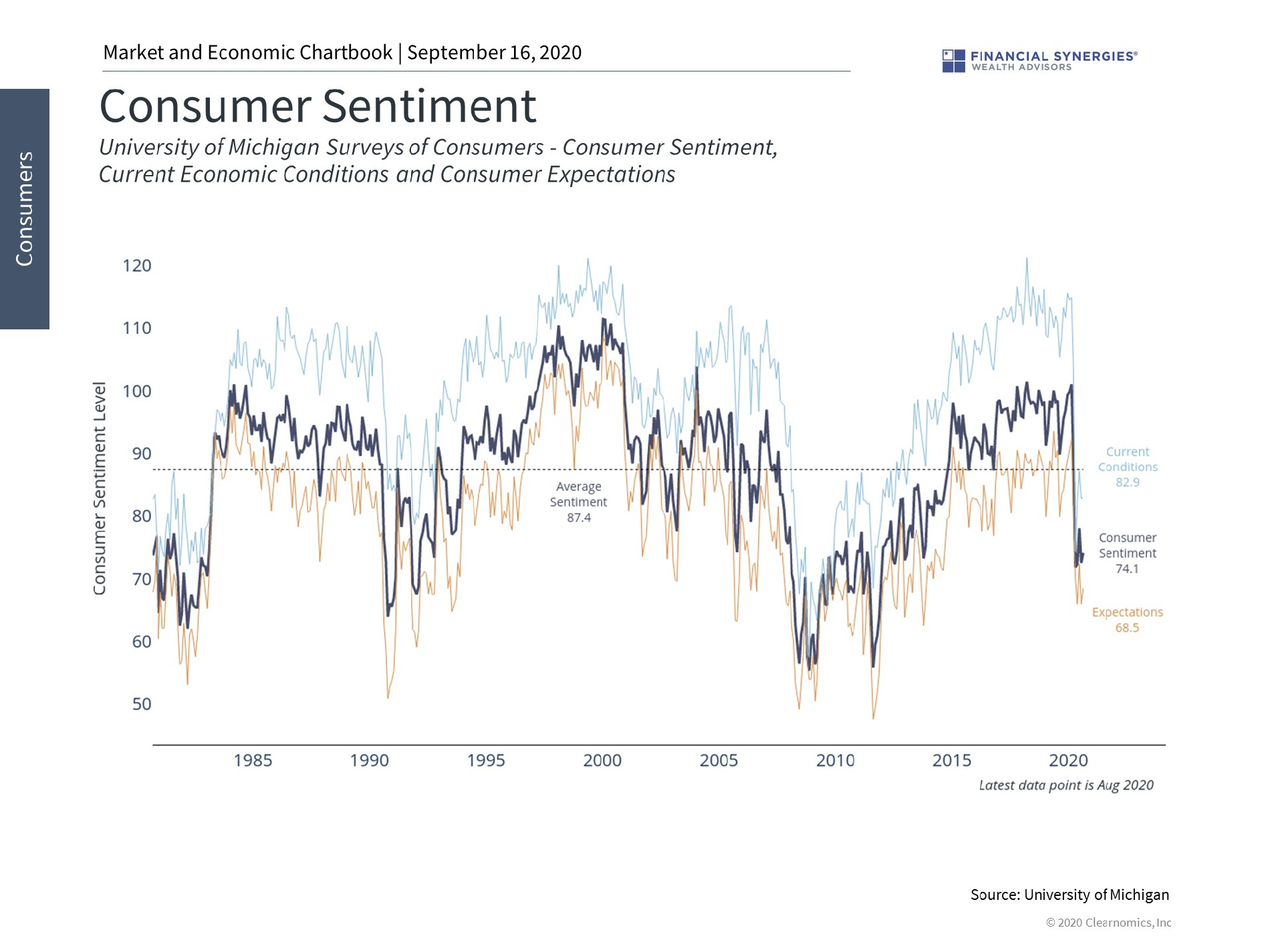 Surveys of consumer sentiment suggest that many Americans still feel negative – both on current conditions and their expectations for the future. Many of these measures are at their lowest points since the beginning of the last economic recovery.

3. The federal deficit will increase dramatically this year 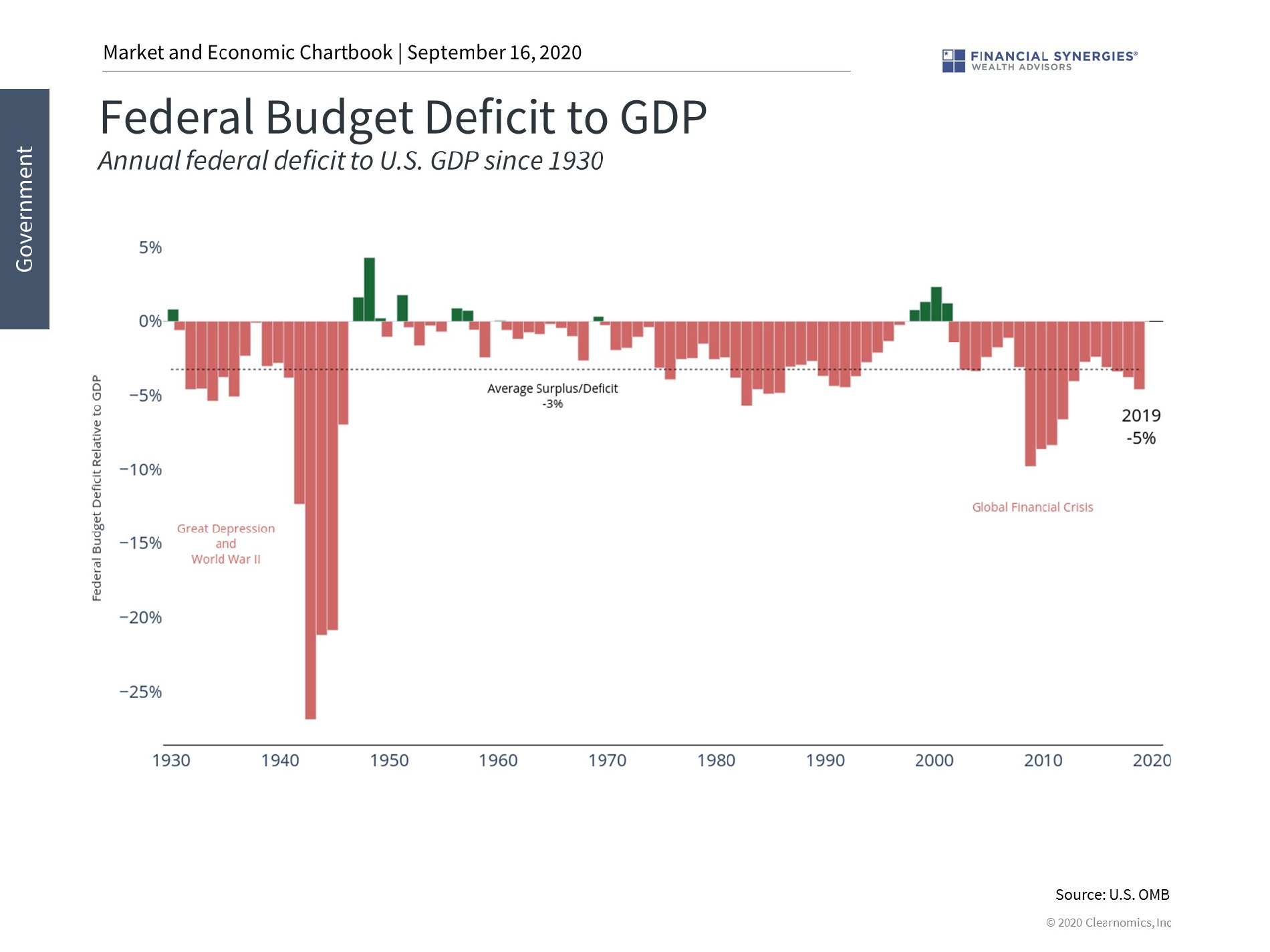 The federal budget deficit will likely spike when the fiscal year ends in late September. The chart above clearly shows that deficits tend to rise during economic crises and wartime. The current period will be no different as emergency stimulus measures such as the CARES Act push government spending to multi-decade highs.

Although some investors are concerned about whether there will be another stimulus bill, many parts of the economy are already recovering.