Bitcoin Mania is Back

Ok, so maybe “mania” is an exaggeration, but there certainly is a renewed interest and hype around Bitcoin these days. Maybe that’s because it’s up over 200% in 2020 and has now surpassed its high from three years ago (currently more than $21,000).

I last wrote about this subject a few years ago when Bitcoin was the trendy “water cooler” topic in investing. And it seemed that everybody wanted a piece of the high-flying cryptocurrency. In my first post on the subject, I was simply trying to understand and explain the basics of Bitcoin. I went on to write a second article in which I explained that I had purchased a little Bitcoin.

I figured if I wanted to discuss Bitcoin intelligently then I should at least understand the process of investing in it firsthand. So, I put a tiny bit of money into it via a company called Coinbase (coincidentally Coinbase filed for an IPO today) and let it ride. And what a rollercoaster ride it has been! I had a feeling when I bought in three years ago I was surely getting in at a top. That’s generally the way it goes when you are buying into the hottest asset on the planet at the time.

And that’s exactly what happened. My “investment” promptly lost around 80% of its value. See the painful visual below. It was inevitable – hence I put only a tiny amount of play money into it. Part of me thought there was a good chance Bitcoin would go to zero and I’d never see that money again. I hadn’t logged into my Coinbase account in more than a year. Imagine my surprise recently when I checked it and saw that my Bitcoin account was now worth more than I put in. 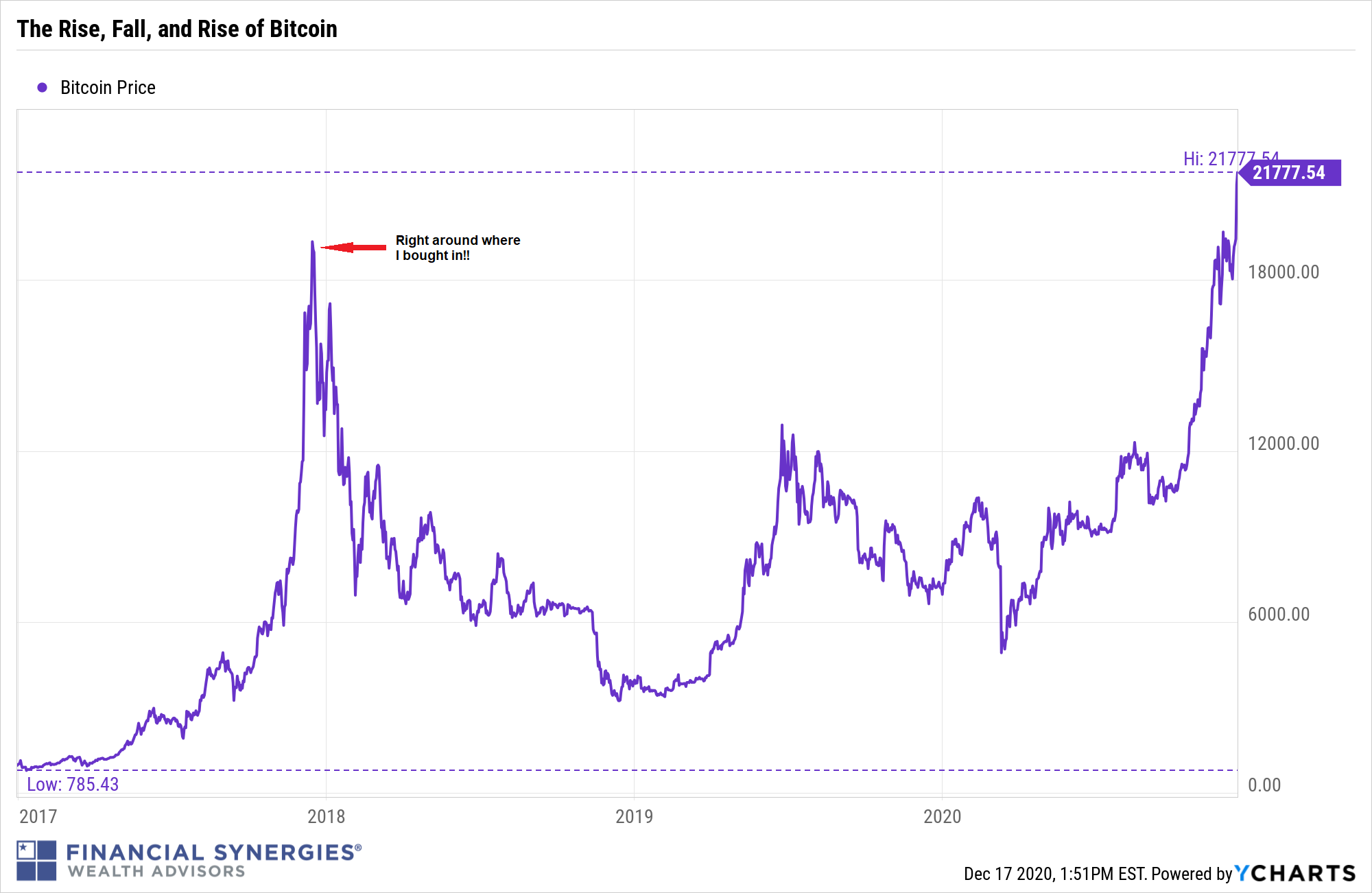 It took three years for Bitcoin to get back to and surpass its previous high. It sounds like a long recovery time, but in the grand scheme of things it’s really not too bad. Hell, some asset classes are just now fully recovering from the Financial Crisis of 2008-2009.

Honestly, I still don’t know quite what to make of Bitcoin. Over the last few years the conversation around it has evolved. It has taken on a more mature tone. Whereas in the beginning it was this esoteric thing used by gamers and online criminals, now major companies like Square and MicroStrategy are investing hundreds of millions of dollars in the cryptocurrency as a store of value. And recently PayPal announced that American users can buy, hold, and sell Bitcoins in their PayPal wallets.

We may be entering into a new phase for Bitcoin, accelerated by the COVID-19 pandemic, in which it is going more mainstream.

Let’s back up and answer some basic questions about Bitcoin:

Bitcoin was originally proposed as a universal digital currency that exists outside of sovereign nations. Bitcoin’s functionality is made possible through cryptography, and specifically through its introduction of a blockchain.

While Bitcoin can be used as a currency in certain situations, the more widely accepted use case is as “digital gold” representing a store of value. While today, this may not seem that important in the United States, remember that bitcoin is global. If you are in a nation where inflation renders your paycheck worth less immediately after hitting your bank account, you’re going to want to be able to swap into something that will better protect the real value of your principal.

I’m not sure I’m buying the whole “store of value” argument just yet. Gold is volatile enough. I don’t put my cash into gold as a store of value, and Bitcoin takes volatility to a new level. It is anything but a “safe” investment. Maybe if I lived in a country with crazy high inflation I would think differently, but I’m not there yet.

When a blockchain is utilized by other businesses, or for other decentralized purposes, it is a separate blockchain than bitcoin’s blockchain. In many cases these are built upon blockchain technology centered around software-driven ‘smart contracts.’ Blockchains can be public or private, opened or closed, but bitcoin’s blockchain does not offer this flexibility as it was developed for one purpose and one purpose only, to make bitcoin transactions possible.

Regardless of what happens to Bitcoin, or any other cryptocurrency, blockchain technology may truly change the world as we know it. But that’s a conversation for another day.

The easiest solution is to open up an online account with a company like Coinbase, although there are many other options out there. Based on my research there really is not a viable way to invest in Bitcoin through a vehicle like an ETF or mutual fund. I’m sure there will be in the future, but what’s available now is primarily on international exchanges and the expense of these vehicles is exorbitant.

Like gold, there is no real intrinsic value to a Bitcoin. Its valuation relies on the collective value that the world places on its features as a currency store of value. Or said another way, it’s worth what the buyer is willing to pay for it. It has no earnings, no cash flow, pays no dividends, etc. While this might not seem like the best answer for a sustainable asset, this is no different from gold, or frankly, the US dollar. If tomorrow, the collective human race decides that it has lost all faith in the creditworthiness of the United States, the dollar becomes worthless. Bitcoin, on the other hand, does not have a centralized entity guaranteeing it nor making rules that govern it.

Bitcoin is still in its infancy. As the world becomes increasingly digital people will become more and more comfortable with “digital currency.” Will Bitcoin be THE cryptocurrency to rule them all? Maybe, but who knows. Maybe it will go the way of the LaserDisc. Anyone remember those things?