Economic uncertainty continues to affect financial markets, as it rightfully should since, in the long run, stock prices follow trends in economic growth. And investors are wondering how high interest rates might rise, whether there will be a deep recession (or if we’re in one already), when inflation might begin to recede, if unemployment will tick up, and more. That’s a lot to take in!

Unfortunately, speculation on these issues and how the Fed might react is widespread and has put the market on edge, resulting in sizable swings in both directions. As tempting as it may be, we have to avoid playing the guessing game when it comes to the Fed’s next move. 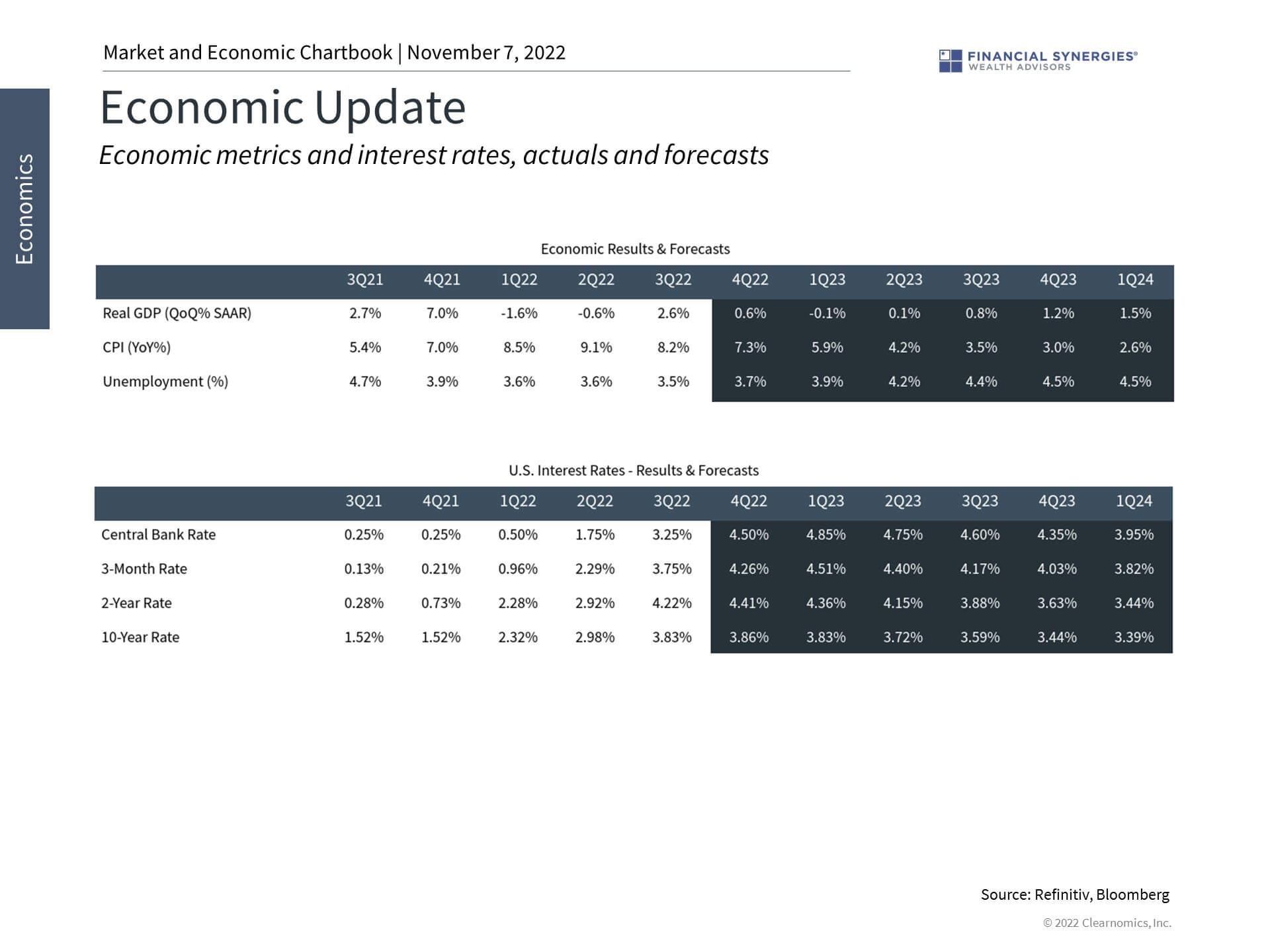 Perhaps the biggest recent event is that the Fed raised the fed funds rate by 75 basis points (three-quarters of one percent) for the fourth time in a row. It’s important to remember that the Fed’s policy rate was zero as recently as March due to the pandemic. The central bank has now raised rates six times in as many meetings this year, one of the fastest paces on record. Other central banks have followed the Fed’s lead including the Bank of England which immediately raised their own key policy rate by 75 basis points.

The market now expects the Fed to raise rates by at least 50 basis points in December, ending the year with a fed funds target range of 4.25% to 4.5%, in line with the Fed’s September projections. The market also expects the Fed to raise rates through the first half of 2023 to reach a target rate above 5%. With inflation still much higher than the fed funds rate – core CPI, PCE and PPI are 6.6%, 5.1% and 7.2%, respectively – some wonder why the Fed would slow down at all.

While investors may have jumped the gun during the market rally from June to August, it did show that the market is able to recover once it has digested the Fed’s plans.

This is where Fed Chair Powell attempted to shift the conversation at the latest press conference. Rather than focus only on the path of rate hikes, he suggested that it’s more important to consider the “terminal” rate and how long it might stay at those levels. Recent market rallies and pullbacks have been driven by alternating hopes and fears around the Fed taking its foot off the brake pedal. While investors may have jumped the gun during the market rally from June to August, it did show that the market is able to recover once it has digested the Fed’s plans.

Central banks around the world are following the Fed’s lead 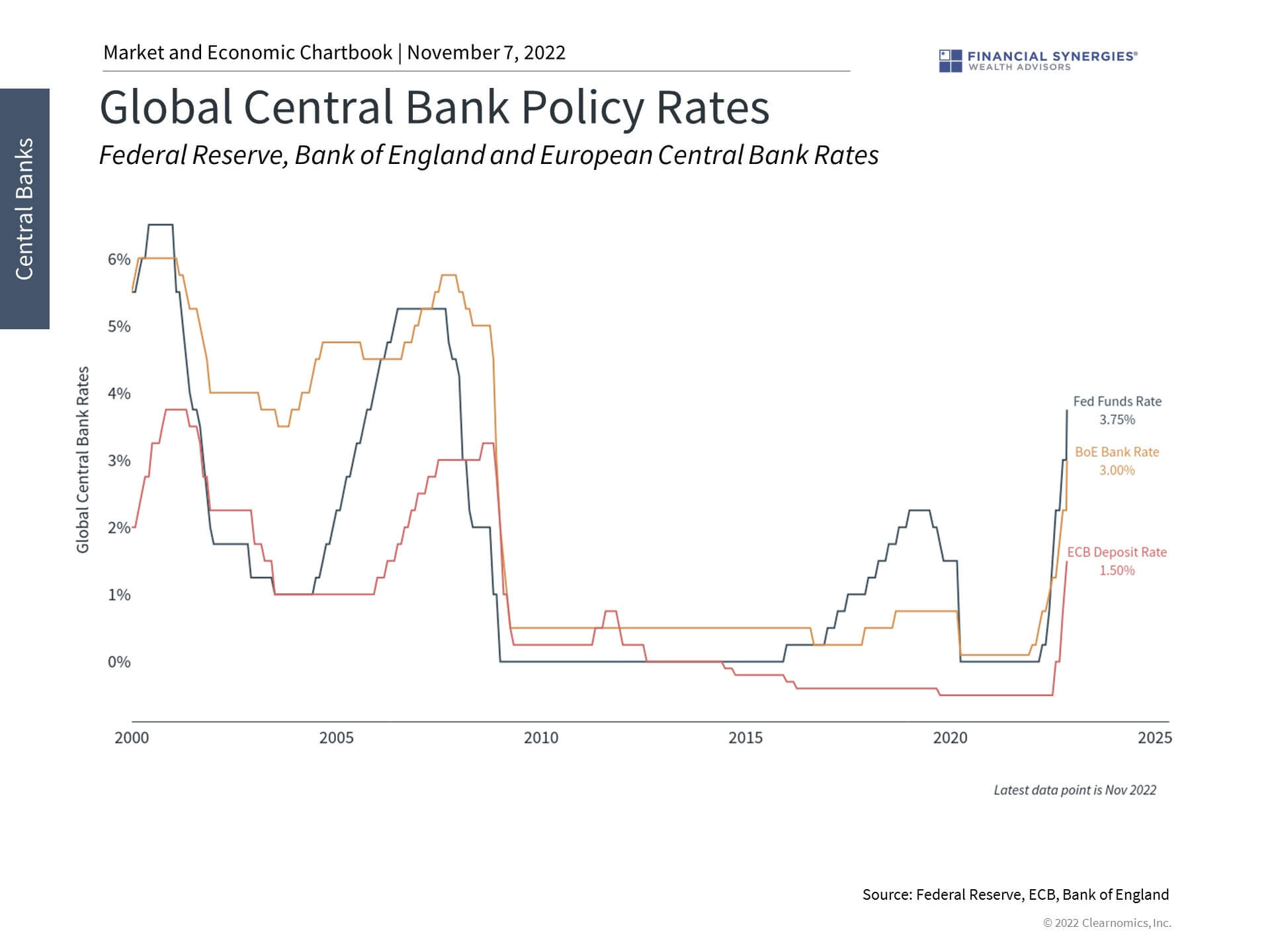 What makes it hard for the market to anticipate the path of rates is that there is only one good point of comparison when it comes to Fed rate hikes driven by inflation: the late 1970s and early 1980s under Fed Chair Paul Volcker. The similarity is that both that period and today were driven initially by external shocks such as high energy prices.

However, unlike the stagflationary Volcker era, many parts of the economy today are robust and the unemployment rate is still quite low. So, there is understandably a great deal of speculation as to how today’s inflationary pressures might affect the economy and markets.

To make the issue murkier, the latest jobs numbers for October were stronger than expected. The economy added 261,000 jobs over the month, exceeding forecasts of 193,000. The prior month’s payroll figure was also revised up from 263,000 to 315,000. The unemployment rate did rise slightly to 3.7% but wages also improved at a faster-than-expected rate of 0.4% month-over-month. Overall, the labor market continues to be resilient to Fed rate hikes despite the central bank’s best attempts to combat inflation.

Rising rates are having differing effects across sectors 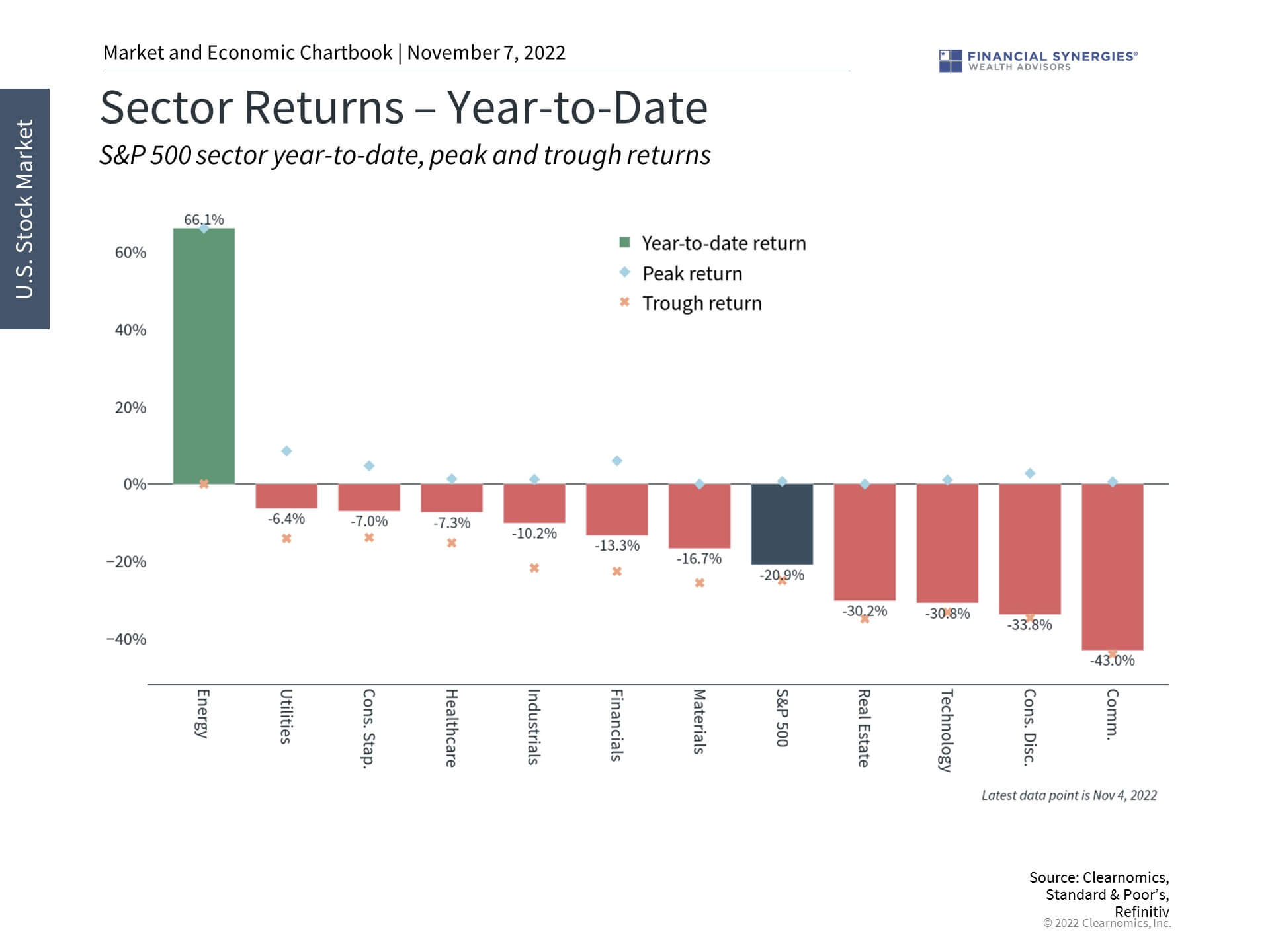 If rates are having any impact, it’s likely occurring on an industry-by-industry basis. Clearly, rate-sensitive sectors such as real estate are struggling and are likely already in recession. The housing market has experienced a notable slowdown across permits, housing starts, construction activity, and sales prices. The prices of housing-related commodities such as lumber have plummeted since March.

The same is true for technology stocks spread across the Information Technology, Communication Services and Consumer Discretionary sectors of the S&P 500. In theory, tech stocks are sensitive to interest rates because their stock prices reflect growth far off into the future. The more rates change, the more they affect the present value of future cash flows. The tech sector is also where the majority of layoff announcements have been concentrated. In contrast, the energy sector has held onto year-to-date gains due to higher commodity prices.

In this uncertain environment, how should we interpret the latest Fedspeak and market reaction? The Fed continues to be between a rock and a hard place as it attempts to calm inflation while avoiding a recession. If inflation begins to subside in the next several months, then rate pressures may also ease, reducing the strain on rate-sensitive sectors and the overall market. Investors have gotten ahead of themselves at several points throughout the year, but this just shows how quickly markets can react to positive news.

Unfortunately, the nature of the inflation data is that they are only released monthly at best, and Fed meetings occur only once every six weeks. While investors can speculate in the meantime, it’s likely better to simply remain patient as economic events play out and the narrative evolves. Focusing too much on each data release, or trying to guess every market reaction, is not only impossible, but counterproductive.

History shows that market recoveries can occur when they are least expected. And it’s how we react to these challenging times that will have the greatest impact on long-term financial goals.