Last week, the Fed announced that it will pause its policy of interest rate hikes and end its balance sheet reductions. This reversal in policy was fully expected by the market, which is also anticipating rate cuts beginning in 2020. Even though the market saw this coming, there were significant moves in interest rates and the stock market. Measures of yield curve steepness – specifically the 10-year Treasury minus the 3-month T-Bill yield – inverted as a result. This sparked renewed fears of a potential recession and the end of the business cycle.

The yield curve can be an abstract concept but the implications are simple. For long-term investors, the yield curve tells us about the health of the economy and where we are in the business cycle. Typically, the yield curve is very steep at the beginning of a cycle. This is because the Fed keeps short-term interest rates low during economic downturns to stimulate the economy. As growth picks up, long-term rates begin to rise, which steepens the yield curve.

As the economic cycle matures, eventually short-term rates are high due to Fed rate hikes, while longer-term rates begin to rise more slowly or even decline. Thus, the shape of the yield curve can give us hints as to how far along the cycle may be.

It’s been no secret that as we near the tenth anniversary of this economic expansion the yield curve has been flattening. But as was the case last year when the 5-year and 2-year inverted, it’s important to understand that this is a process, not an overnight event.

First, not all parts of the curve have inverted. Importantly, the 10-year and 2-year yields are the traditional focus of many investors and economists. While this measure has fallen further, it hasn’t officially inverted. And even when it does, history shows that there can be anywhere between one to two years before the actual onset of a recession.

Second, it’s well understood that we are later in the business cycle. To the extent that additional points on the yield curve are inverting, this is simply further evidence of what many investors already understand. Many signs corroborate this, including the historically low level of unemployment, slowly rising inflation, and potentially slower GDP growth.

Finally, while it’s always risky to say “this time is different,” there are some facts to keep in mind. Historically, reversals in Fed policy have been a delayed reaction to a weakening economy. Thus, one reason the Fed is correlated with recessions is that by the time they pause rate hikes, or even lower rates, the economy is already slowing down.

The current Fed leadership, of course, understands this history and is likely trying to avoid it. Thus, an especially cautious Fed may actually send the wrong, premature signal about the health of the economy.

While the possibility of a recession is a question of when, not if, it will likely be a process. As such, the big picture issues for long-term investors haven’t changed over the past week. It’s never been about the exact timing of the next recession or market pullback – instead, it’s about being positioned properly when they occur. Investors should continue to focus on economic fundamentals and stay properly diversified across all phases of the market cycle. 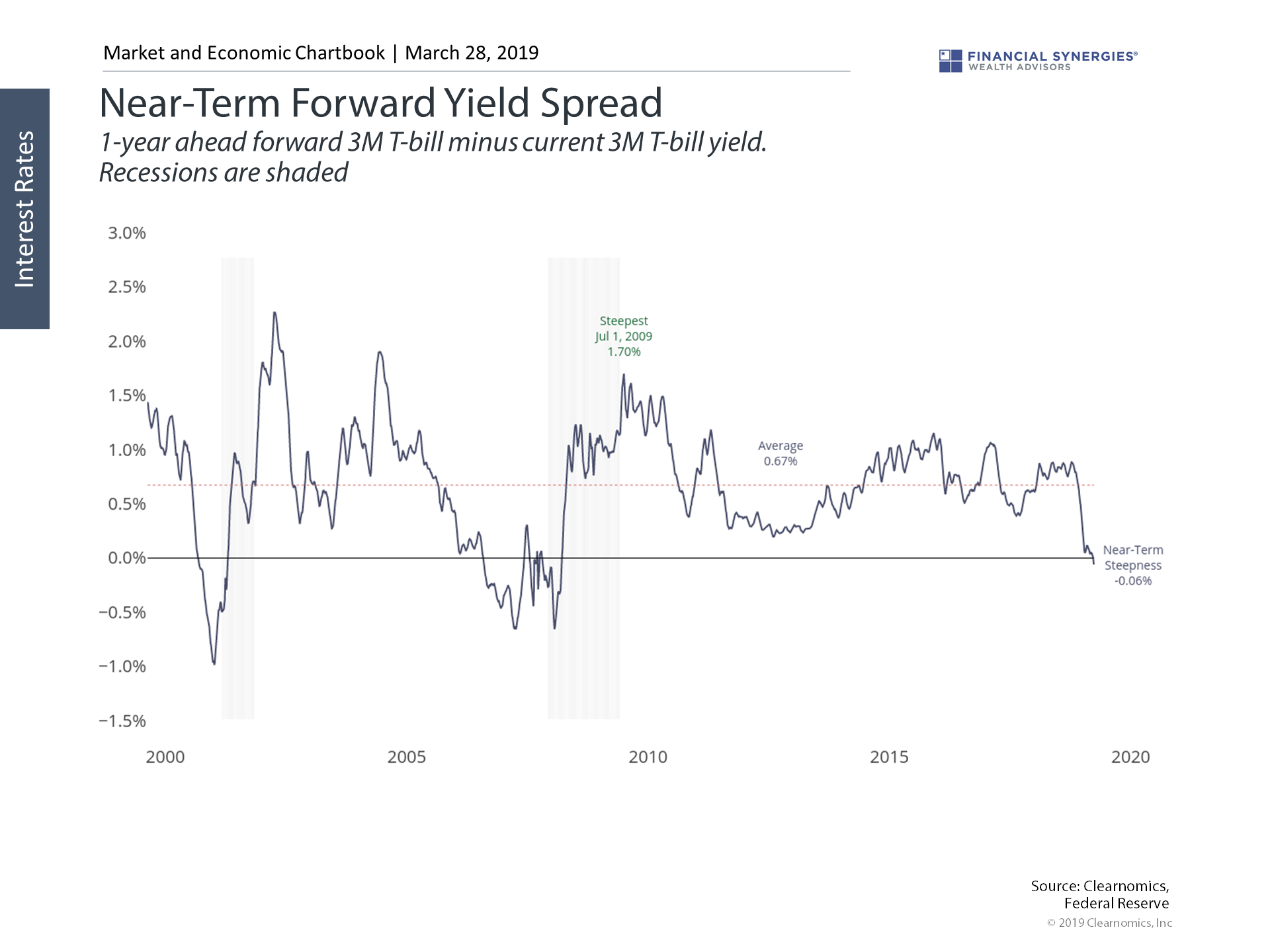 With interest rates falling further, additional parts of the yield curve have inverted, including the 10-year minus 3-month yields. A related measure, one watched closely by the Fed, is the difference between the 3-month yield today compared to the one implied by futures contracts in 1 year’s time, shown in the chart above. This measure has also flattened to zero.

However, how investors and the media discuss the yield curve is a bit of a moving target. Traditionally, the 10-year and 2-year are the primary recession indicators. When economists talk about recession probabilities and timing, they are usually referring to these measures. This is because measures such as the 10-year minus the 3-month yield have historically been less reliable, either providing late signals or false positives.

Ultimately, all of these measures are pointing in similar directions and suggesting that we are later in the economic cycle. This shouldn’t be a surprise for any investor who understands that we’re ten years into the economic cycle and that most economic measures have made significant progress.

2. The yield curve continues to flatten 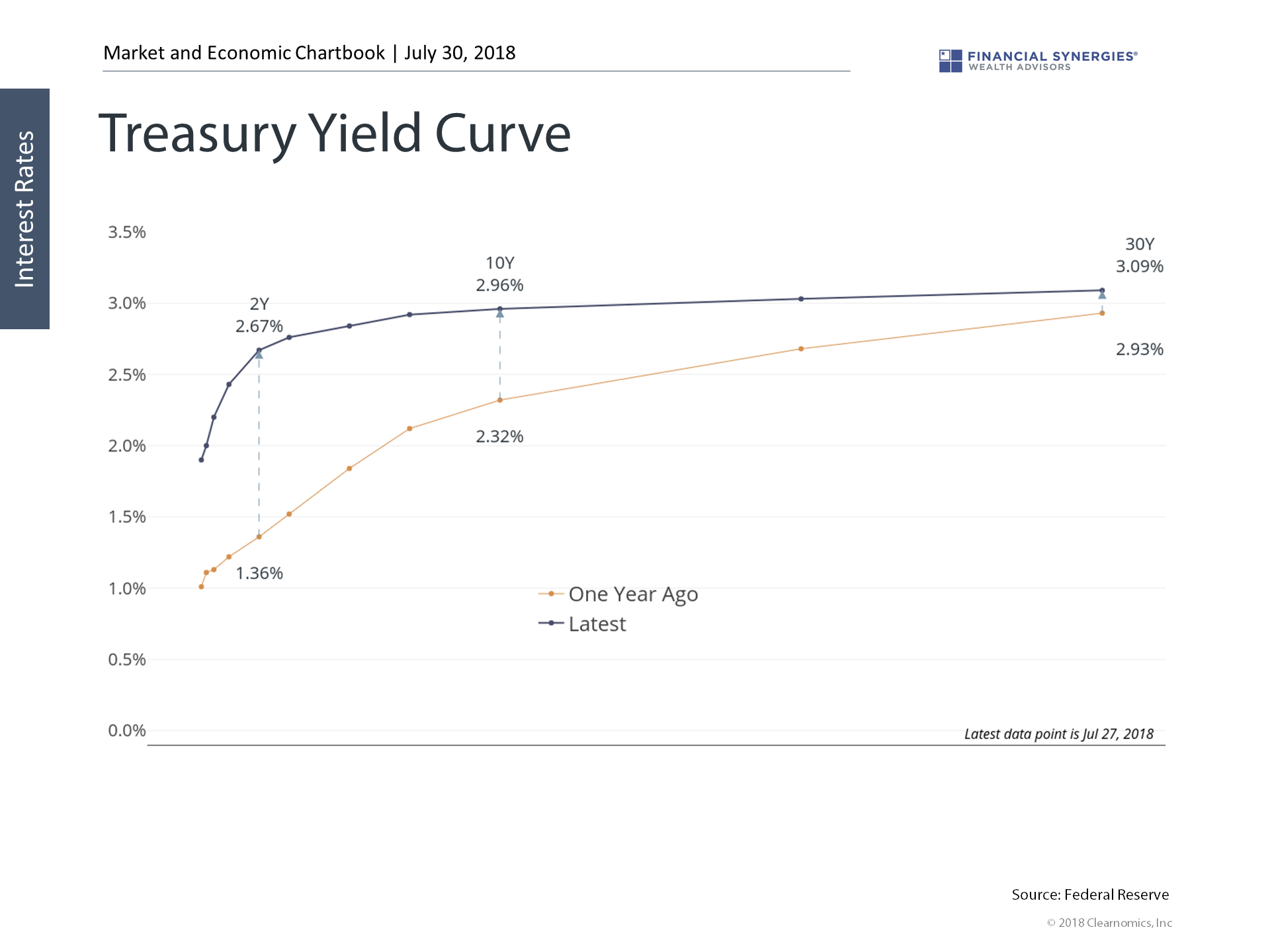 Just as was the case when the 5-year and 2-year inverted last year, much of the recent inversion is the result of abnormally high short-term rates compared to long-term ones. However, with the Fed pausing its policy of interest rate hikes, it’s likely that shorter-term interest could begin to decline as well. This could reduce some pressure on the shape of the yield curve.

Still, this is little comfort for those investors who need income. Interest rates are still low across the board, making portfolio income hard to come by. This has been the story the entire market cycle. Investors will still likely need to be disciplined and find income from a variety of sources.

3. The Fed anticipates no additional rate hikes in 2019 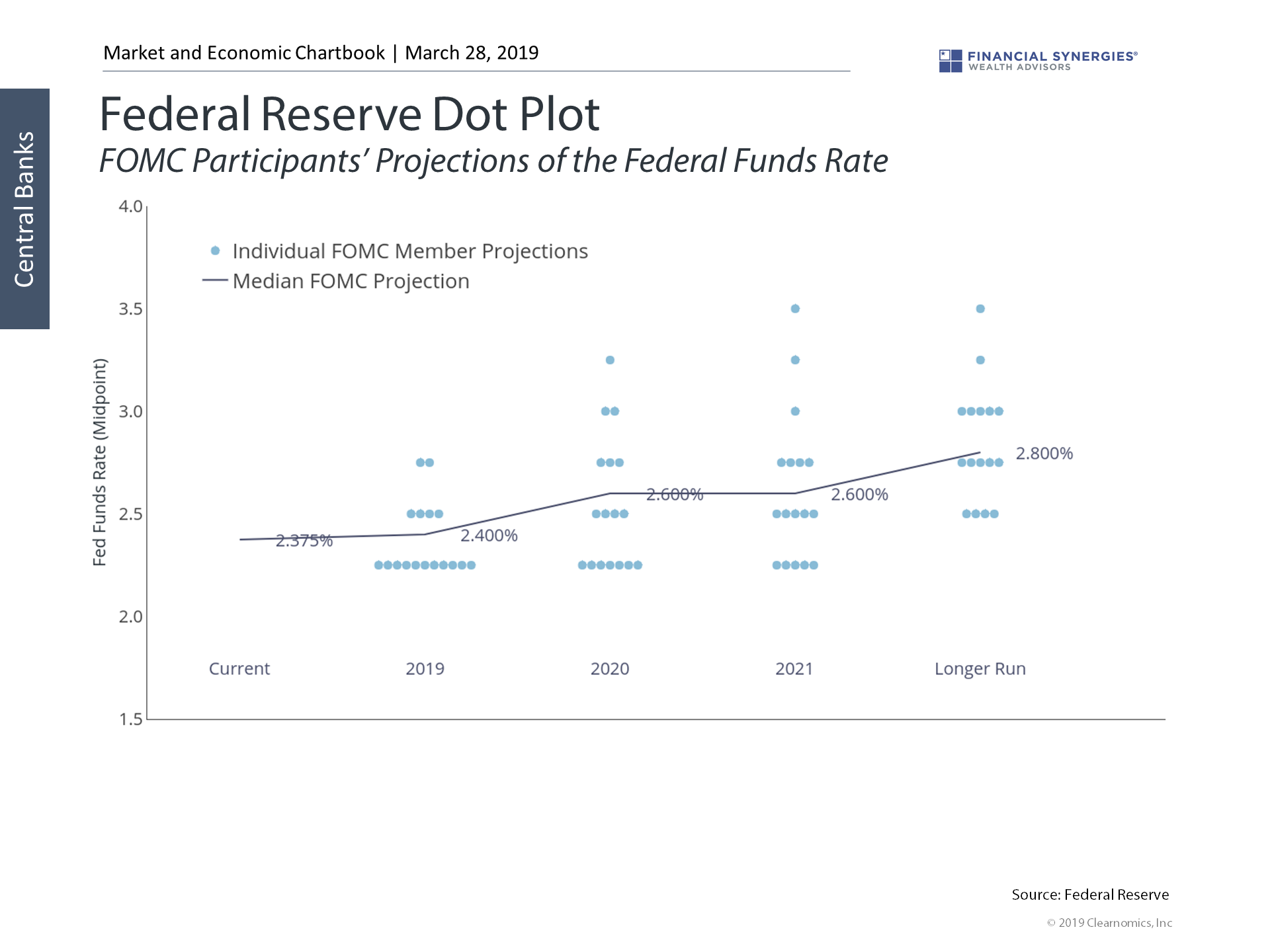 In response to economic uncertainty and market volatility, the Fed has signaled that they may be more cautious. The fed funds futures market suggests that the Fed may not only pause its path of rate hikes but may even cut rates in 2020. This could alleviate some of the yield curve flattening that we discussed above, but may also keep interest rates lower for longer.

This chart shows the expectations of FOMC participants from last week’s Fed meeting. While the Fed still expects rising rates over time, it’s clear that rate hikes will be extremely slow if they happen at all.