A Case For Optimism

Let me state the obvious – it has not been a fun year for investors. But there are plenty of reasons to be optimistic, even if the market is not reflecting this at the moment.

With many investors concerned about trade wars, rising rates, and the tech sector, it’s important to remember what drives markets in the long run: historically, healthy economic growth supports stock returns while economic downturns result in market pullbacks. In other words, if short-term concerns are individual waves, economic trends determine the tide.

The U.S. economy continues to look healthy. Yes, there are legitimate market concerns, including the impact of trade tariffs and some weaker-than-expected global data. But, generally speaking, this is still a good time to be invested, especially with a balanced portfolio tailored to long-term financial goals.

The truth is that this was never a terribly fast-paced recovery compared to past business cycles, as shown in the first chart below. Yet, growth has been steady throughout the nine years of this economic expansion. That has been enough to push unemployment down to historic levels and generate exceptional corporate earnings growth. This in turn has supported strong stock market returns for those investors who stayed balanced after 2008.

Thus, in general, a healthy economy supports investment returns. While it’s clear we’re in the later stages of this business cycle, this is yet another reason for many investors to maintain a balanced portfolio and focus on long-term planning.

Here are three charts on this important topic:

1. U.S. economic growth has been slow and steady 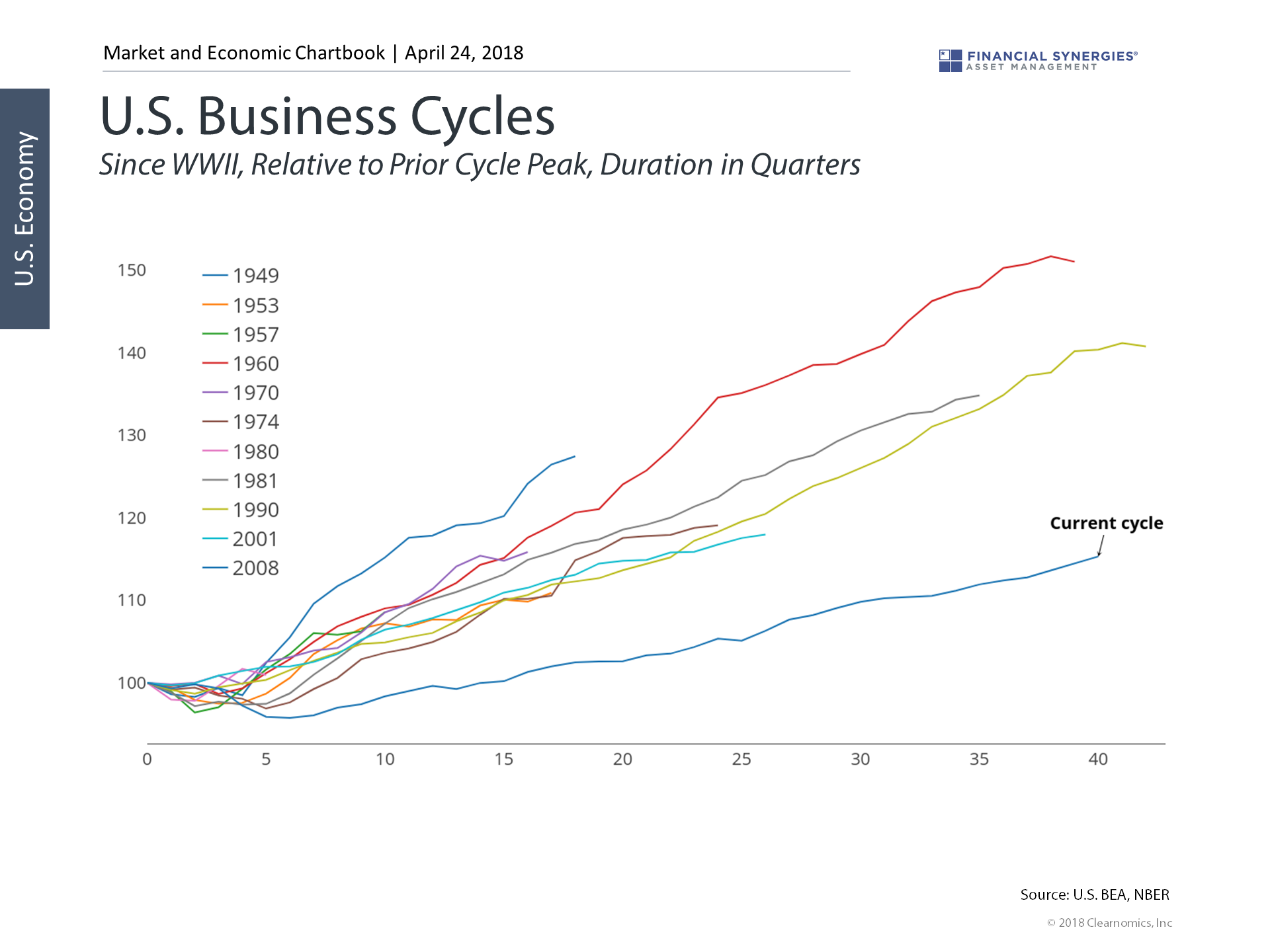 There’s both good and bad news about this business cycle. The good news is that, as we approach the tenth year, this is the second longest economic expansion on record – only the 1990’s was longer. The bad news is that the pace of growth is also the slowest on record.

The chart above shows the path of economic growth during the eleven recessions and subsequent expansions since World War II. We can easily see that the ten-year cycle during the 1990’s witnessed the economy grow three times more than the current cycle. Thus, there were legitimate concerns about the state of the recovery after 2008.

And yet, growth has been extremely steady, even if it’s been slow. This has been enough to push unemployment to historically low levels, as we’ll see below. It’s also generated strong corporate profit growth which has pushed stocks to record highs. 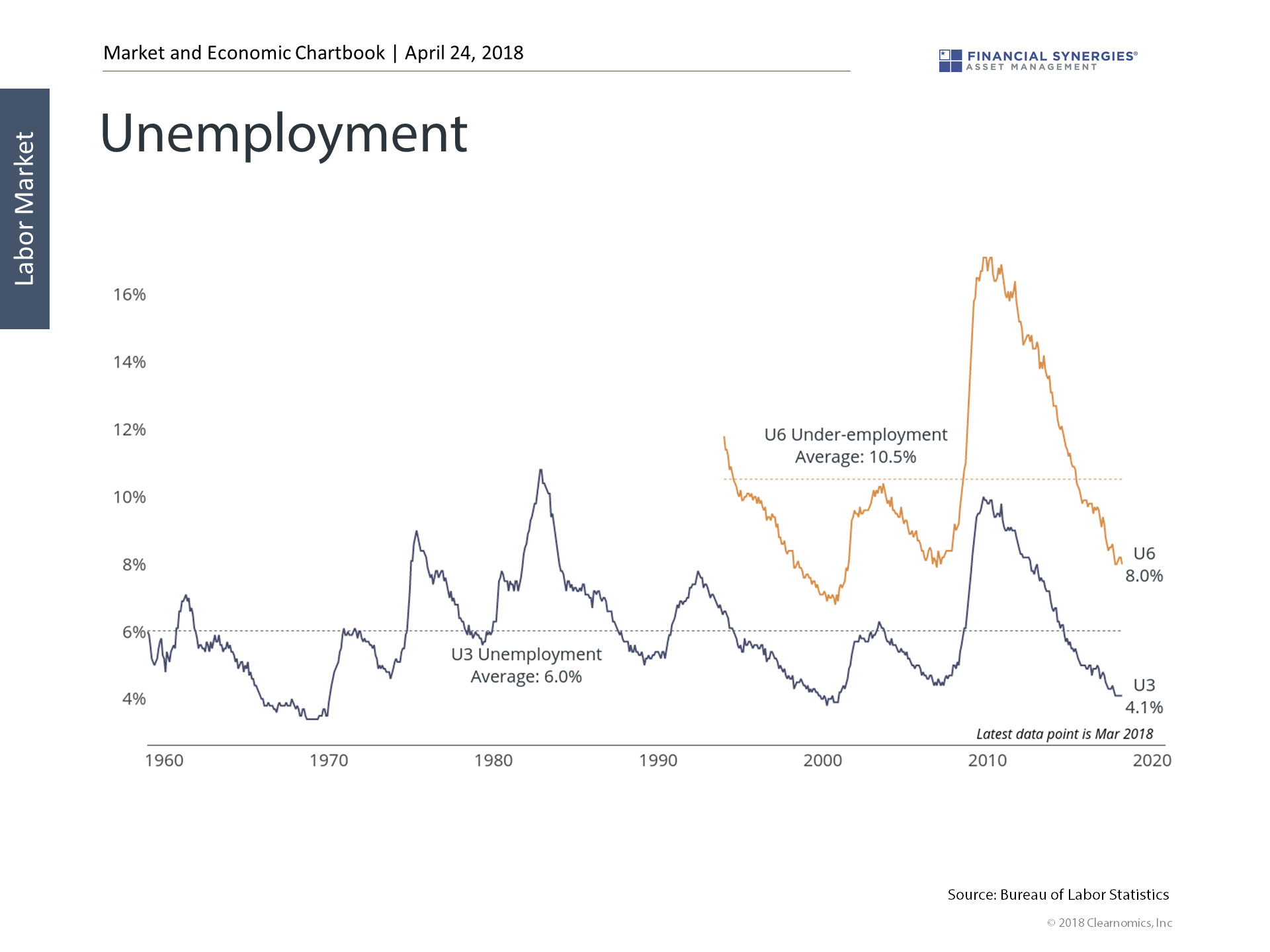 The recent jobs report showed that the economy added 103,000 jobs in March. While this missed expectations, this is still a solid number given where we are in the business cycle. There are a few important ways in which to put this number in context.

First, the jobs numbers can be volatile from month to month. Just last September, the non-farm payrolls number fell to only 14,000, the lowest number in seven years. Yet, the following month then added 271,000 jobs. It’s clear that we should look past short-term variations in these numbers. On average, the economy has added 188,000 jobs per month over the past year, a very healthy pace.

Second, 103,000 is still a solid number at this late stage in the economic expansion. In fact, even a number as low as 80,000 is enough to offset population growth and thus push down the unemployment rate.

Finally, and most importantly: since World War II, there have only been a few occasions when the unemployment rate was this low. The last instance was during the tech bubble in 1999. During the housing bubble, unemployment only reached as low as 4.4%. Even the under-employment rate, which takes into account those who have had difficulty finding work, has fallen to 8.0%.

Thus, the unemployment rate suggests that we are later in the business cycle. This is one reason the Fed may accelerate the pace at which it raises interest rates. Still, this also means that even a slower pace of jobs growth is enough to keep the economy chugging along.

3. This is still a healthy environment for corporate earnings to grow 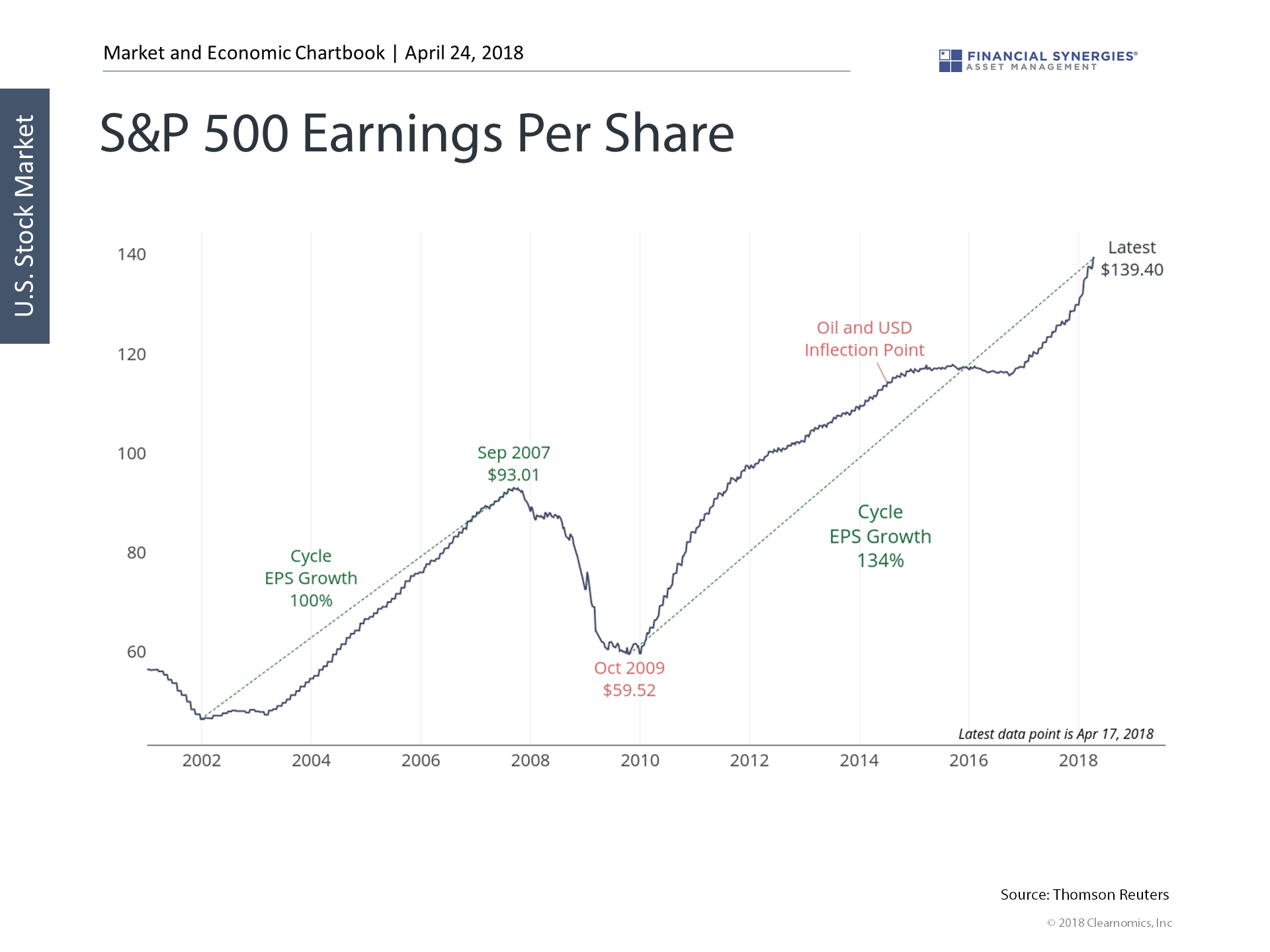 While we’ve emphasized the importance of economic growth, this only matters to investors if it translates into growth in corporate profits. After all, investors take advantage of the long run growth in the economy by buying shares of major corporations. Even if stocks move randomly in the short run, they tend to follow earnings in the long run.

Expectations for corporate earnings have actually accelerated even as market volatility has increased. This disconnect, which represents more attractive market valuations, could help to support long-term stock market returns.

Thus, while U.S. economy is in the later stages of the cycle, the market can continue to be supported by corporate earnings. It’s more important than ever for investors to stay focused on long investment horizons and maintain diversification.