While there are still many challenges with COVID-19, there are also reasons to be optimistic. From a public health perspective, without diminishing the human and societal toll this pandemic has taken, the current trajectory would have been among the best-case scenarios predicted by experts only three months ago. Similarly, from a market and economic perspective, recent data on consumers and credit markets show positive trends as well. These two critical factors, which were sources of concern as recently as March, are important for long-term investors to understand as we approach the second half of the year.

Specifically, last week’s retail sales report showed that consumer spending began to thaw in May. Compared to the prior month, retail sales rose a record 18% across all types of stores. Although these levels are still 6% below where they were a year ago, they are a significant improvement from the 20% year-over-year decline in April. Non-store retail sales (i.e. online shopping) are 31% higher than a year ago, continuing a trend witnessed not only during the nationwide lockdown, but over the past decade as consumer habits have changed.

If consumers were unwilling or unable to spend then reopening cities would do little to jump start the economy. Thus, recovering retail sales are important for two reasons. First, it suggests that consumers feel confident enough to open their wallets again, just a month after savings rates rose to 33% of disposable income. This shows that they feel financially secure enough to make new purchases and make up delayed ones too. Other data corroborate this story – auto sales bounced back a bit in May to 12.2 million cars annually after falling to about 8.6 million annually, the lowest level since 2010.

Second, the fact that many retailers, including brick-and-mortar stores, experienced a turnaround is an early indication that consumers may be willing to return to stores and restaurants across the country. Although it may take time and public health advancements to fully return to normal, especially because many establishments can only operate on a limited basis, this does mean there is a light at the end of the tunnel.

On an even wider scale, another major factor in the economic recovery is the stabilization of credit markets. Bond yields spiked in March to levels last seen in 2015-2016 when the energy sector suffered a meltdown. The fact that this crisis affected all major companies and industries was a significant cause for concern – one that could turn a one-time hit to the economy into a systemic problem akin to the 2008 financial crisis. The fact that debt levels were elevated across the broader economy would only add fuel to the fire.

Fortunately, credit markets have stabilized alongside other markets. Not only has the Fed injected a historic level of liquidity in the financial system through a variety of programs, but fiscal stimulus also helped place the economy on life support, resulting in an improving economic outlook.

Investment grade yields have fallen to pre-crisis levels thanks to low interest rates and a federal funds rate at the zero bound. Junk yields are still elevated but have come down significantly over this period as well. Some household names have filed for bankruptcy but this hasn’t resulted in ripple effects across the economy at this point.

Of course, we’re not out of the woods yet. There will continue to be challenges ahead in battling the novel coronavirus, whether there is a second wave in the Fall or if there is simply one long continuous wave. Social distancing and reduced capacity will hurt the retail, hospitality and restaurant industries and corporate earnings will be uncertain. Unemployment claims continue to be elevated with over 20 million continuing claims last week and 1.5 million new claims, despite other signs that jobs are returning. Continued economic uncertainty could result in more market volatility, just as investors have experienced the last two weeks.

For long-term investors, achieving financial goals has never been about waiting for the stars to perfectly align (which never happens). Historically, staying invested and making the most out of the markets as they stabilize has been even more important than investing when times are good. The current transition period in the market, from crisis to some sense of normalcy, will continue to require investor discipline and patience.

Below are three charts that help to put the trends investors should understand in perspective.

1. Consumer spending rose in May as the economy reopened 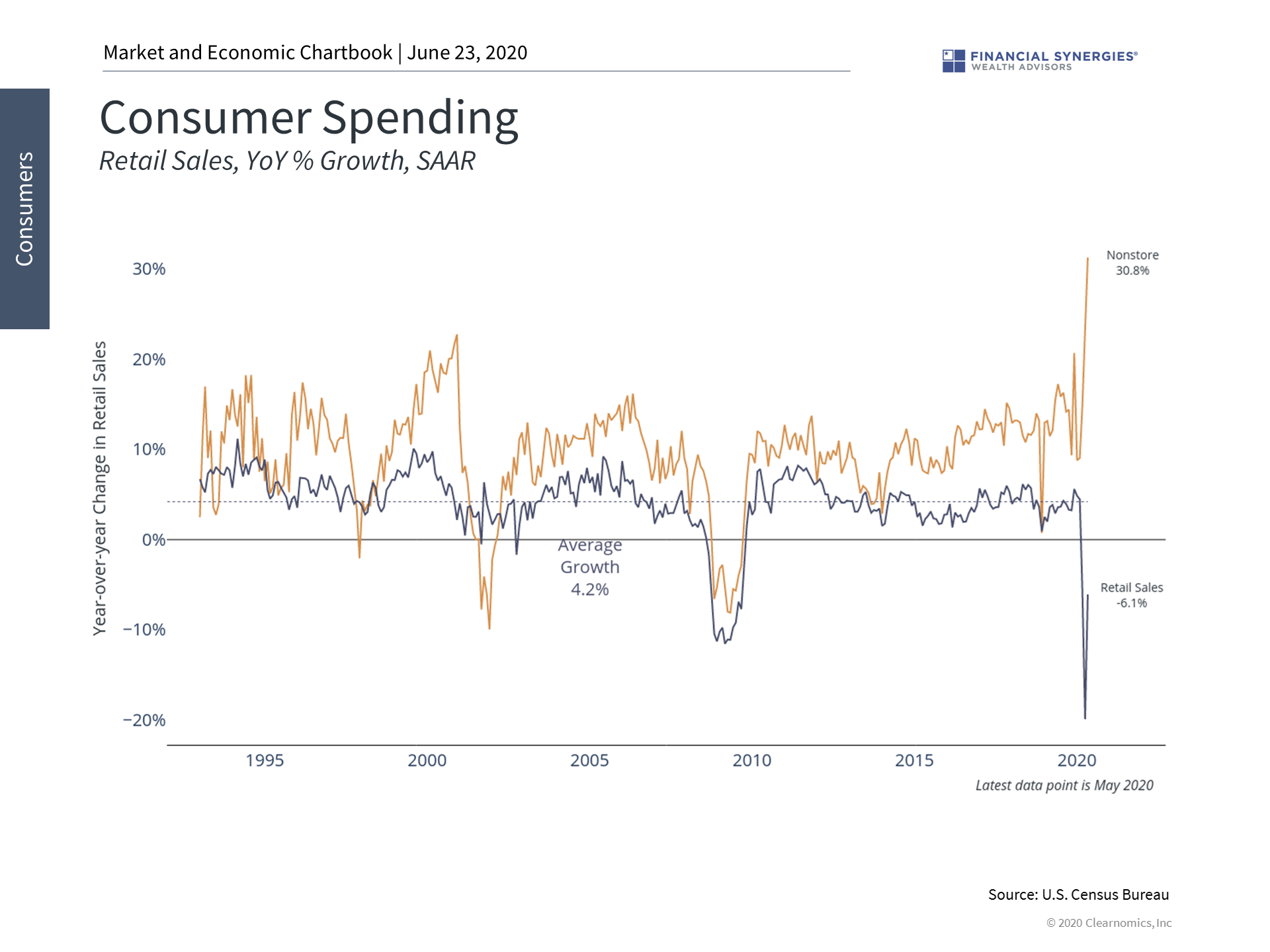 Retail sales recovered somewhat in May after falling precipitously in April. On a month-over-month basis, overall retail sales jumped a record 18%. This is the flip side to the 33% savings rate achieved in April. These are signs that consumers feel more financially secure and safer going shopping than they have since the crisis began.

2. The credit market has stabilized 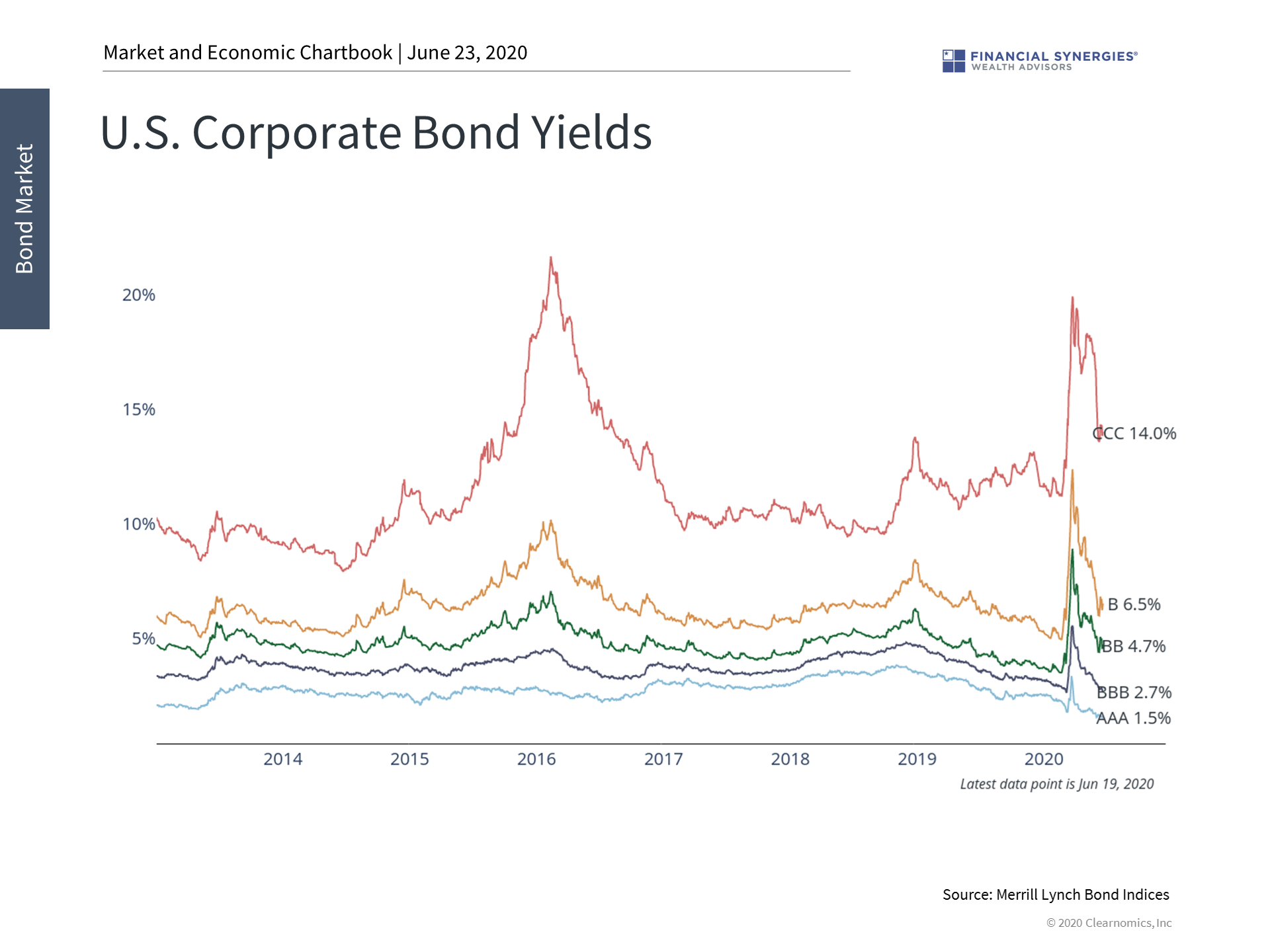 Credit markets have stabilized since yields spiked in March as the economy began to shut down. In fact, many higher quality yields have fallen below their pre-crisis levels. Although riskier credit ratings continue to see elevated yields, there are fewer signs of the contagion in credit markets that would have resulted in the worst-case financial market situation.

3. The recovery is ongoing with over 20 million Americans out of work 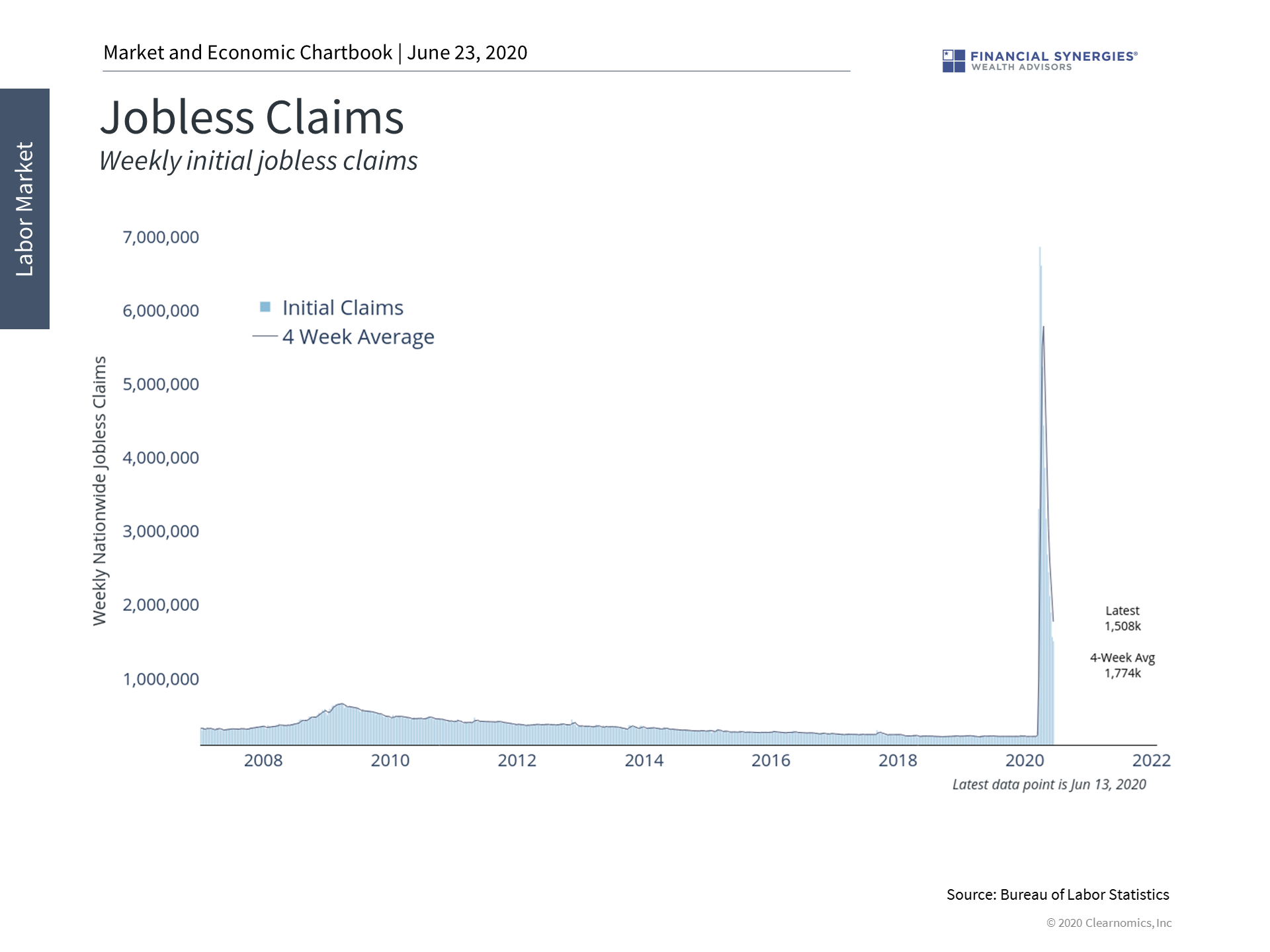 The labor market still has a long way to go in order to recover lost jobs. At the moment, over 1.5 million Americans are still filing new unemployment claims each week and over 20 million are continuing to receive benefits. While there are signs that furloughed workers are returning to work and other hiring activity has begun, these numbers are a stark reminder that it may take years to return to pre-crisis job levels.

The bottom line? Many economic signs that were worrisome in March have stabilized. It’s going to take discipline to benefit from the long-term market recovery.