The Real Impact of Inflation

When the prices of goods and services increase over time, consumers can buy fewer of them with every dollar they have saved. This erosion of the real purchasing power of wealth is called inflation. Inflation is an important element of investing and must be factored into every financial plan.

Investing for the Long Term

As the value of a dollar declines over time, investing can help grow wealth and preserve purchasing power. Over the long haul stocks have historically outpaced inflation, but there have also been short-term stretches where this has not been the case. For example, during the 17-year period from 1966–1982, the return of the S&P 500 Index was 6.8% before inflation, but after adjusting for inflation it was 0%. Additionally, if we look at the period from 2000–2009, the so-called “lost decade,” the return of the S&P 500 Index dropped from -0.9% before inflation to -3.4% after inflation.

Despite some periods where stocks have failed to outpace inflation, one dollar invested in the S&P 500 Index in 1926, after accounting for inflation, would have grown to more than $500 of purchasing power at the end of 2017 and would have significantly outpaced inflation over the long run. The story for US Treasury bills (T-bills), however, is quite different. In many periods, T-bills were unable to keep pace with inflation, and an investor would have experienced an erosion of purchasing power. After adjusting for inflation, one dollar invested in T-bills in 1926 would have grown to only $1.51 at the end of 2017. 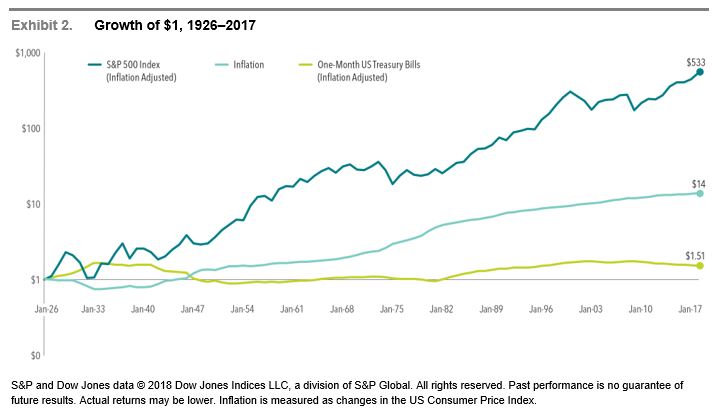 While stocks are more volatile than T-bills, they have also been more likely to outpace inflation over long periods. The lesson here is that volatility is not the only type of risk that should concern investors. Ultimately, many investors may need to have some of their allocation in growth investments that outpace inflation to maintain their standard of living and grow their wealth.

Inflation is an important consideration for many long-term investors. By combining the right mix of growth and risk management assets, investors may be able to blunt the effects of inflation and grow their wealth over time. Remember, however, that inflation is only one consideration among many to contend with when building a portfolio for the future. The right mix of assets will depend upon that investor’s unique goals and needs.