Last week, on February 8th, the market experienced a technical “correction.” A correction is defined simply as a decline of 10% or more from the most recent high. We’ve since recovered a significant chunk of that reversal, thanks to a few good days of large gains. That being said, it could certainly turn south again in a hurry.

The market is undergoing a transition period, and it hasn’t been a pleasant one. Global markets have been volatile with large intra-day swings. Many explanations are being thrown around, from simple economic narratives to those involving leveraged inverse volatility ETFs. CNBC ran headlines such as “Why haven’t the markets been halted amid this drop? They haven’t fallen enough” – over the course of last week. Even investors who are normally calm may find it difficult to not be curious. After a quiet 2017, it was a rude awakening.

What is driving this transition period? Economic data has shown for some time that we are near full employment. When January’s jobs report showed that wages were rising faster than expected, it was evidence that inflation was rising – the second shoe had dropped. Thus, it’s natural for markets to face uncertainty as investors digest these facts.

The market faces adjustment periods all the time. Recent examples include the run-up to the presidential election in 2016 and the taper tantrum in 2013. In both cases, volatility ensued as investors took time to adjust to a changing market and economic landscape. However, in all cases, the market eventually settles once there is greater certainty.

Why should rising inflation and interest rates matter this much? As we’ve emphasized in recent weeks, there are two drivers of the stock market over the long run: earnings (i.e. cash flows) and risk (i.e. discount factor). Thus, even if the fundamentals haven’t changed – after all, the economy is still very healthy, and earnings are still strong – it’s the realization that interest rates are rising and may continue to rise. After a long period of extremely low rates, this is a sign of a healthy, growing economy.

Wage growth is rising, along with inflation 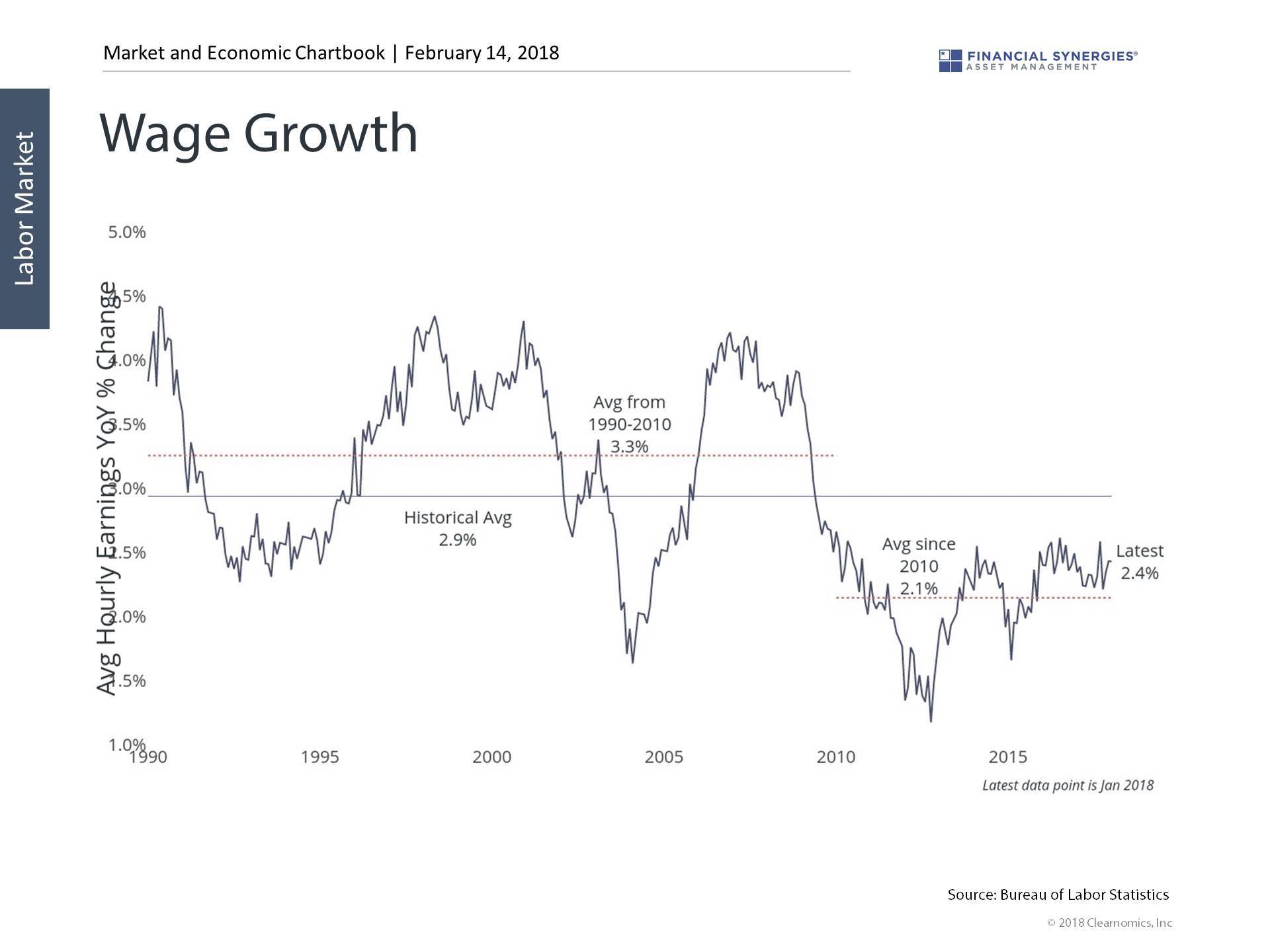 Inflation has been unusually low throughout this economic cycle. There are many possible reasons for this, including slow growth for much of this cycle, technological advancements pushing down prices (the “Amazon effect”), and others. However, there is reason to believe that while inflation may be lower than in past cycles, it will eventually pick up.

The January jobs report showed that overall wage growth accelerated to 2.9% on a year-over-year basis. The chart above shows that wage growth for hourly workers grew by 2.4%, a rate that is lower but still faster than inflation. This is evidence that inflation is accelerating.

Inflation is important for at least two reasons. First, along with the unemployment rate, it is a key indicator of the health of the economy. Rising inflation tells us that we are in the later stages of the business cycle.

Second, inflation is a key driver of long-term interest rates. As we’ll see next, this is one key reason interest rates have been rising.

The market is concerned about rising interest rates 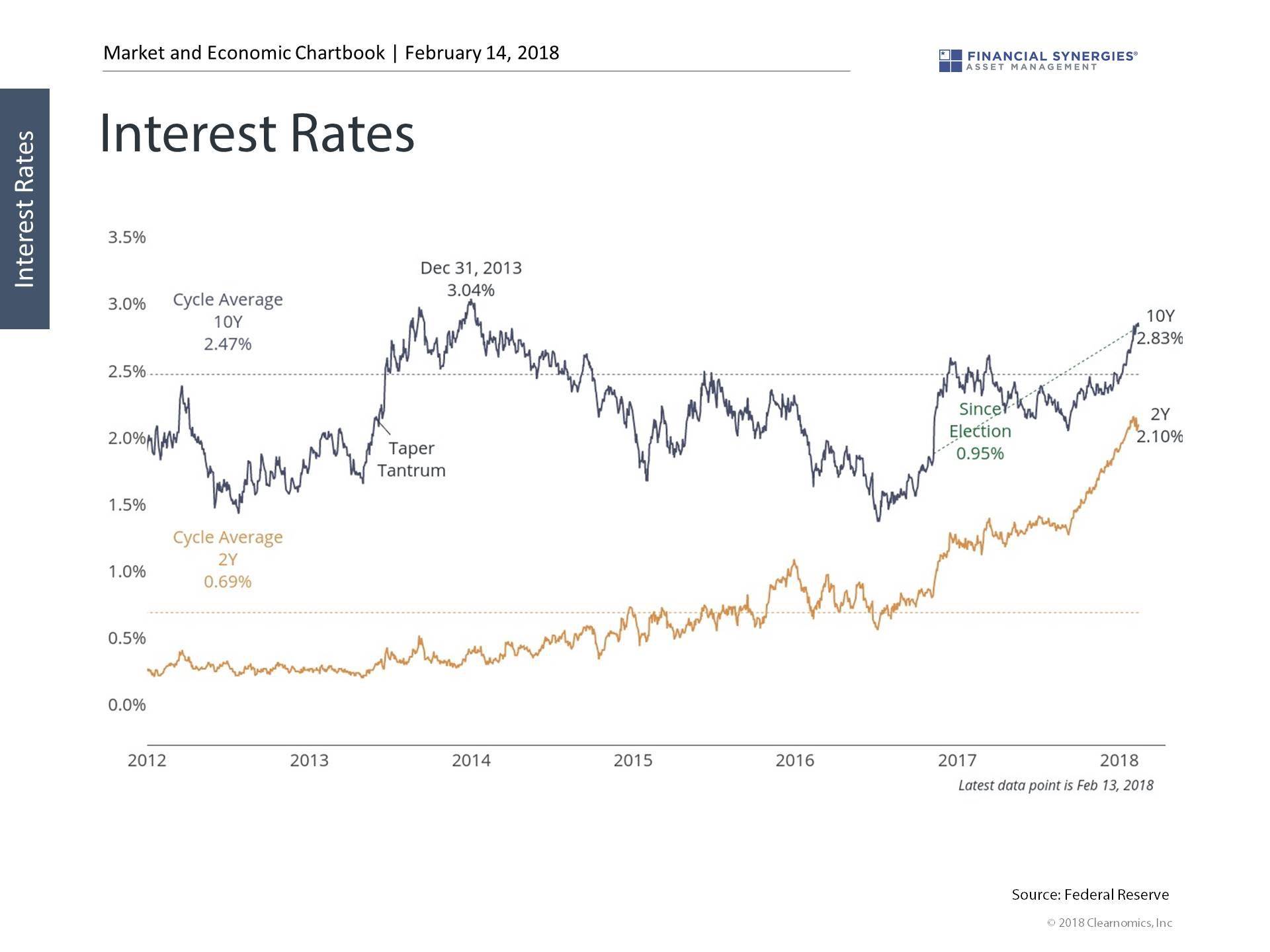 Both short-term and long-term interest rates have been rising this year due to healthy global growth and rising inflation. While the 10-year Treasury yield is still not above the 3% mark last reached in 2013, it is now at the highest level in the past four years.

Just as investors were nervous about rates rising in 2013, it’s natural to have concerns about what increasing rates mean today. However, the fact that earnings are strong and accelerating suggests that there are many reasons to be positive on the stock market.

Rising inflation means that the Fed may look to accelerate its pace of rate hikes. This uncertainty is exacerbated by a change in leadership at the Fed. Still, we are quite early in the Fed’s tightening cycle, and it’s always impossible to forecast the long-term impact of such hikes.

So, the market officially entered “correction” territory. After last year’s eerily calm market, this feels like a large decline. But this kind of volatility is normal. The average intra-year market declines are almost 14%. We’ve just forgotten what it feels like.