As the economic recovery gathers steam and vaccine distribution accelerates, many investors are concerned about how the Fed may react. If inflation and long-term interest rates continue to rise, will the Fed keep policy rates at zero and allow the economy to overheat? Or will they be forced to raise rates and end the party sooner than expected? What does history tell us about Fed policy and how could it affect investors?

In a way, history is repeating itself as worries about the Fed take center stage, just as they so often do during recoveries. The irony is that, during the mid-2010s after the global financial crisis, investors were worried about a Fed “liftoff” – i.e., the start of federal funds rate hikes. Today, investors are more concerned that the economy may overheat and spark runaway inflation if the Fed doesn’t raise rates. All of these concerns are taking shape even as the COVID-19 crisis continues, a factor that is well outside of the Fed’s control.

The role of the Fed has traditionally been mundane: to manage interest rates to keep the economy balanced. Their dual mandate to keep inflation low and employment high requires careful monitoring of economic conditions and adjustment of interest rates. Low interest rates can spur economic growth, which is why they are used in times of crisis, while high rates tend to slow the economy. This is a careful balancing act that is as much art as science.

At the moment, Chair Powell and the Federal Reserve Open Market Committee have made it clear that they don’t intend to increase the federal funds rate until at least 2023 and possibly 2024. This is partly because many sectors of the economy may take longer to recover from the pandemic. For instance, the Fed and other policymakers consider a wide array of job market data beyond the headline unemployment numbers. Many data, including individuals that are newly discouraged from seeking work and those that may have been misclassified by official surveys, suggest that “true” unemployment is still much higher than average.

An equally important consideration for the Fed is that inflation has been much lower than expected since at least 2008. Whether this is due to trends such as technological deflation and globalization is the subject of academic debate. Regardless of the causes, the Fed’s position is that it will tolerate overheating inflation since it has run so cool for so long. It will likely do so especially if this allows unemployment to fall to pre-crisis levels.

What does this mean for investors? First, inflation has been declining for decades. And while there are reflationary pressures as the economy bounces back from the pandemic, this is a far cry from the double-digit inflation rates experienced during the 1970s. Investors should consider what higher inflation means to their asset allocations and personal income statements without over-reacting and expecting a stag-flationary environment.

Second, investors often fear the onset of Fed rate hikes even though history suggests that they are a natural and inevitable part of the business cycle. A few tumultuous periods such as the taper tantrum aside, the normalization of the Fed’s balance sheet and rate hikes from 2013 to 2019 occurred alongside a strong bull market.

Of course, market expectations and projections made by Fed governors are based on information available today – an improvement or deterioration in any of the economic data could lead to a different policy path. Additionally, none of this addresses concerns that the Fed has provided too much stimulus over the past two cycles – and that there could be long-term consequences.

What these consequences will entail and when they will occur are the subject of speculation. What’s certain is that focusing too much on Fed decisions distracts investors from what truly matters: sticking to their long-term asset allocations and achieving financial goals. Below are three charts that help to put the Fed’s monetary policy in context.

1. The Fed has kept policy rates low throughout the pandemic 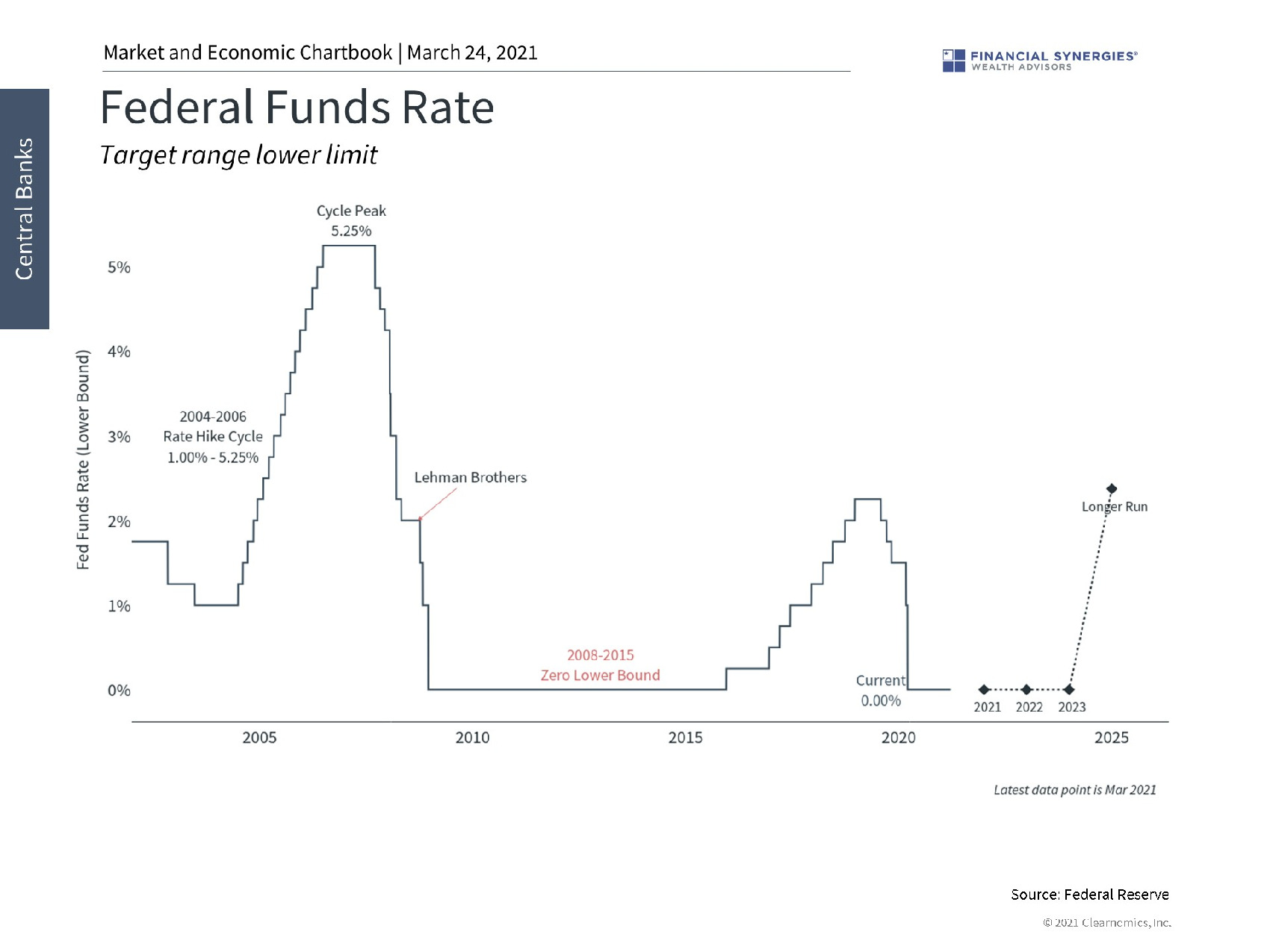 This chart shows that the federal funds rate is adjusted based on economic conditions. The Fed kept policy rates low from 2008 to 2015 in response to the global financial crisis. The Fed also took emergency action last year to stimulate the economy at the start of the pandemic. The federal funds rate is still at the zero lower bound today, and the Fed is still buying assets and growing its balance sheet, despite the ongoing economic recovery. 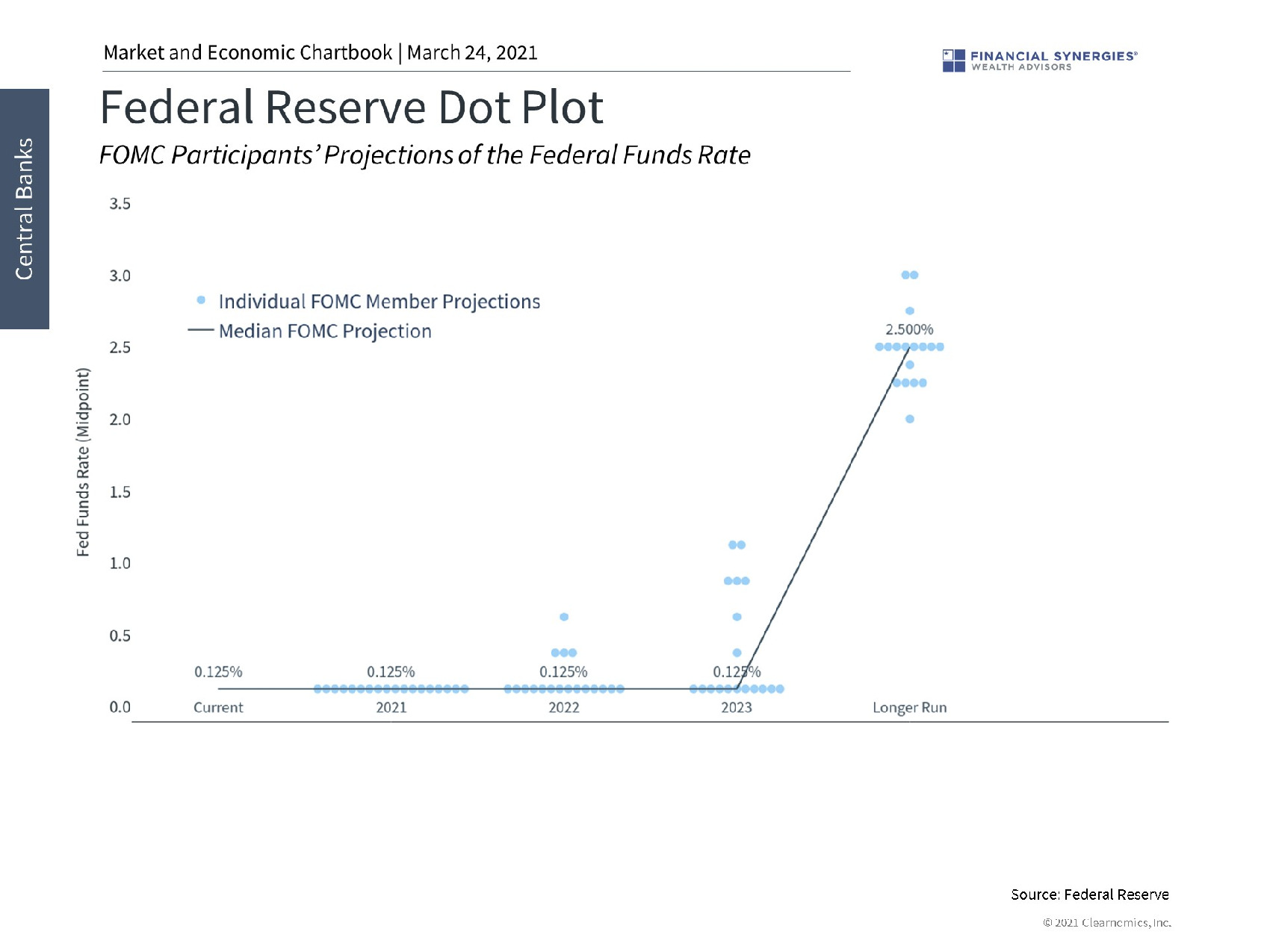 Despite the recovery, the FOMC does not expect rate hikes to begin until at least 2023. This chart shows the Fed’s “dot plot” – i.e., each individual member’s expectation of rates at the end of each calendar year. While more officials expect rates to pick up sooner, the first hike is still years away based on current estimates.

3. Fed rate hikes are a natural part of bull markets 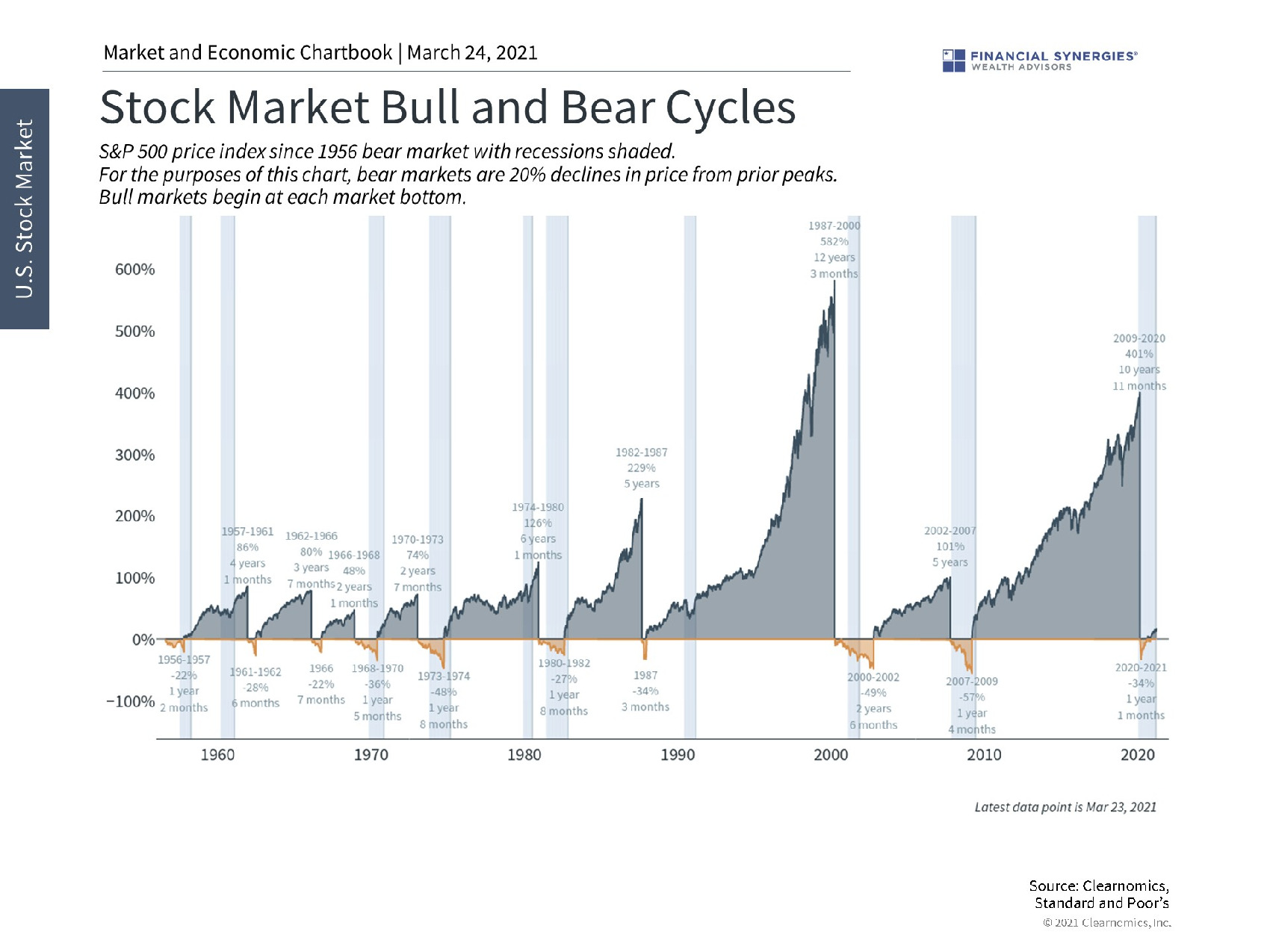 If history tells us one thing about Fed rate hikes, it’s that they are nothing to fear. Rate hikes have occurred alongside rising stock markets across history, whether or not investors have agreed with monetary policy decisions.