Even though April 15th was not that long ago, some of us are still feeling the sting. In the 1930s, taxes caused a great deal more than a sting for one particularly wealthy person – more on that in a minute.

In 1935 the Great Depression was in full swing. Unemployment stood at a stunning 20%, gross domestic product sank from over $1 billion to just $73 million. The only thing that was going up was the suicide rate. It was about this time the board game Monopoly was first sold by the Parker Brothers. It was originally invented by Elizabeth Magie in 1903 and was first known as The Landlord’s Game. According to Ed Lyon, Chief Tax Strategist at Financial Gravity, “she invented her board game to reveal the evils of land monopolism – basically, profiting from the rent you can charge for the use of the land.”

She believed in a single tax theory that a philosopher named Henry George came up with. This theory states that people should own the fruit of their labor, but land and natural resources should be shared by everyone. George believed that the fairest form of tax was to tax the land, and that a land-value tax can help society reduce taxes on labor and other investments.

According to Mr. Lyon, “’Georgism,’ as it’s now called, may sound downright Marxist to contemporary ears. But economists argue that a land-value tax is more efficient than income or sales taxes because it doesn’t reduce productivity. Adam Smith advocated for a land-value tax in The Wealth of Nations. And Milton Friedman, certainly nobody’s idea of a commie pinko, called it the least bad tax that government can impose.”

Also in 1935, the Revenue Act was consummated. Unlike Monopoly’s income tax where they take 10% of all assets (which Mr. Lyon points out was not an income tax at all, but a wealth tax), the Revenue Act of 1935 applied a special 75% tax rate on anyone who made over $5,000,000. That year, just one person in all of America (whom I mentioned at the beginning) had to pay this new tax; that taxpayer was John D. Rockefeller.

Lyon points out that, “As high as Roosevelt’s depression-era taxes sound to us today, he wanted to go even further after Pearl Harbor. He argued in 1942 that in a time of such grave national danger, ‘no American citizen ought to have a net income, after he has paid his taxes, of more than $25,000 a year’ (about $350,000 in today’s dollars). Roosevelt’s simple solution? A 100% top rate on anything above that amount!”

Paying taxes is about as much fun as much fun as landing on Park Place with two hotels on it, but there was a time when the government not only wanted to make sure the rich paid their fair share, but also had its opinion of what their appropriate net income should be. 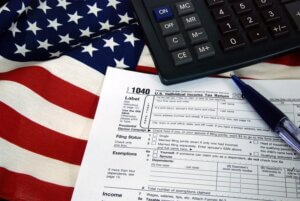