Stocks suck in September. Ok, maybe not 100% of the time, but generally speaking September is the worst month for stocks. And this one is unusually bad so far. 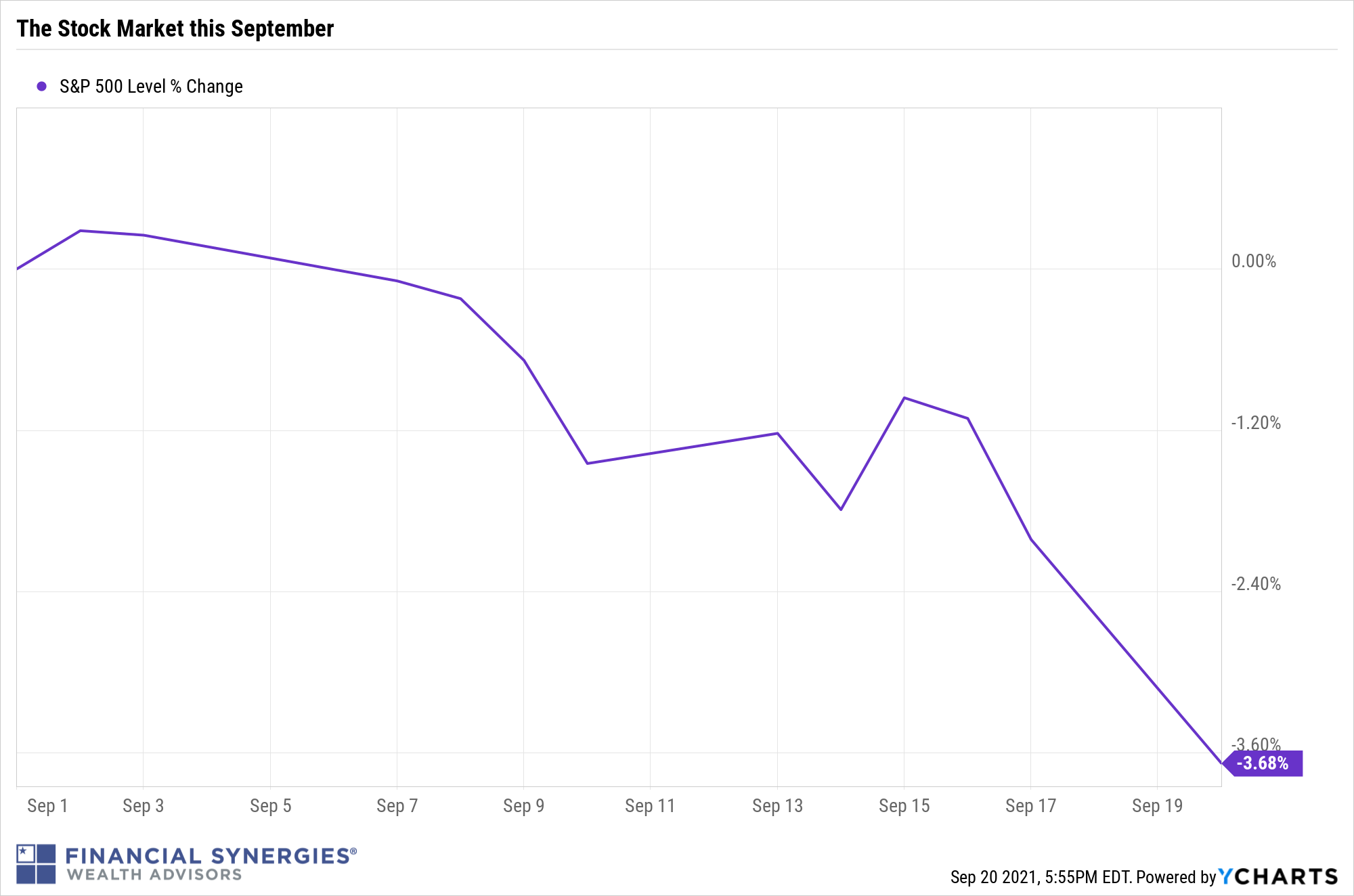 September aside, some are concerned about risks building within the global financial system. These worries cover a wide variety of issues including the pace of the recovery over the past 18 months, the amount of emergency fiscal and monetary stimulus, inflated asset prices, new debt default concerns in China, and more. While these topics are important to understand and monitor, there are always reasons to fear that the sky is falling. Rather than overreact to every new headline, just maintain the right perspective, stay invested and remain diversified. After all, long-term investors are rewarded precisely because they have the patience to look past short-term market problems.

Even though the situation around the Chinese property developer Evergrande is still developing, there are already parallels being drawn to Lehman Brothers in 2008 and even Long-Term Capital Management in 1998. The size of a potential default would be roughly $300 billion and there are fears of contagion to related parties and contracts. There are also no signs yet that the Chinese government will intervene. While these events have captured the market’s attention, there are three facts that investors should remember.

First, markets have been worried about a “China hard landing” since at least 2010 as the country’s growth rate has slowed. From 1980 to 2010, Chinese real GDP grew by 10% per year – an astonishing pace as it caught up to the rest of the world. Growth then slowed to between 6-8%, although this still outpaces the rest of the world. These are based on official government statistics so the actual numbers could be lower.

Many feared that this slowdown would worsen the imbalances that had been growing within the Chinese economy. One key area of concern has been the so-called “shadow banking” system – financial activity that takes place in non-traditional and less regulated channels such as through wealth management products – and whether it would create a 2008-style financial crisis. So far investors’ worst fears haven’t materialized. One argument which is even more relevant today is that China’s command economy gives it the tools to control a crisis, up to a certain limit, even if it does not directly bail out the defaulting entity.

More recent concerns around Chinese government interventions and regulations add to this backdrop. Government scrutiny and rules on education companies, tech, and even video game limits, have hobbled Chinese stocks which in turn has hurt the performance of emerging markets.

So, the second related point is that, while investors may be concerned about these issues and their repercussions across markets, these risks are exactly why investors are rewarded over long time horizons. Despite recent market volatility, emerging markets have contributed significantly to diversified portfolios over the past twenty years. Investing in China and EM requires accepting a large degree of uncertainty. These uncertainties may be due to systemic risks, debt “bubbles,” regulations, market efficiency, the rule of law, and many other issues that are less common in developed markets. This may lead to market swings, but investors have historically been rewarded.

Third, some are calling for a market correction as a result of this episode, combined with uncertainty from the Fed and tax proposals. Corrections are both normal and unpredictable – and should be expected. There are always those who believe a market crash is right around the corner throughout bull market cycles. As we near the end of the third quarter of the year, the largest decline for the S&P 500 this year is still less than 5%. Even if this changes in the coming days and weeks, the average year experiences much larger drawdowns.

Thus, while every market pullback is challenging and each new situation feels unique, the reality is that diversified portfolios tend to stabilize and recover regardless of the underlying causes. The possible debt default situation in China could worsen but this has been on investor and government officials’ minds for over a decade. Resisting the urge to overreact to every new development is the best way to achieve financial goals. Below are three charts that help provide perspective on recent market worries.

1. Emerging markets are volatile but have rewarded patient investors 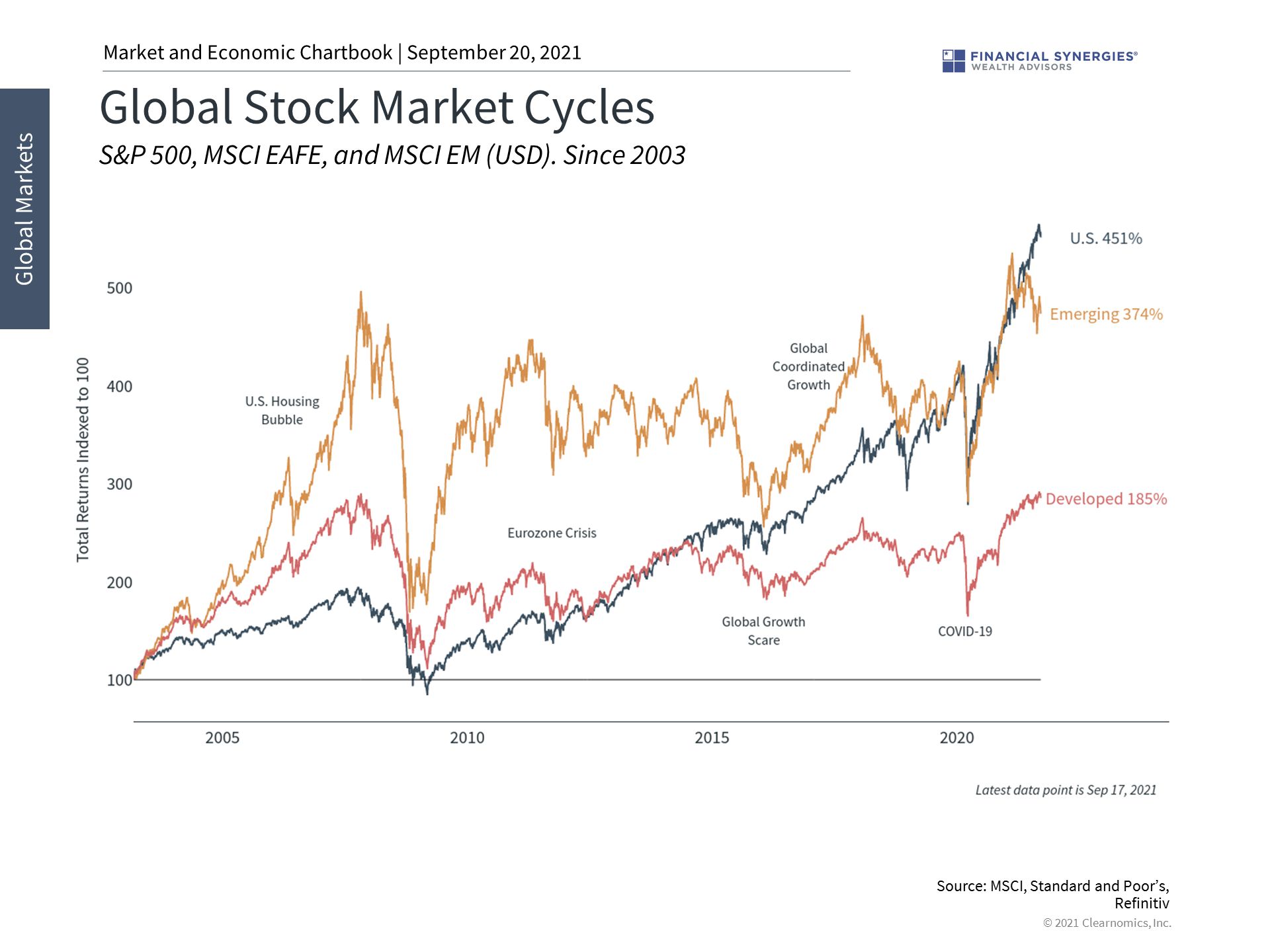 Emerging markets have been the most volatile region. However, investors who include these assets in well-diversified portfolios have been rewarded over long time periods. 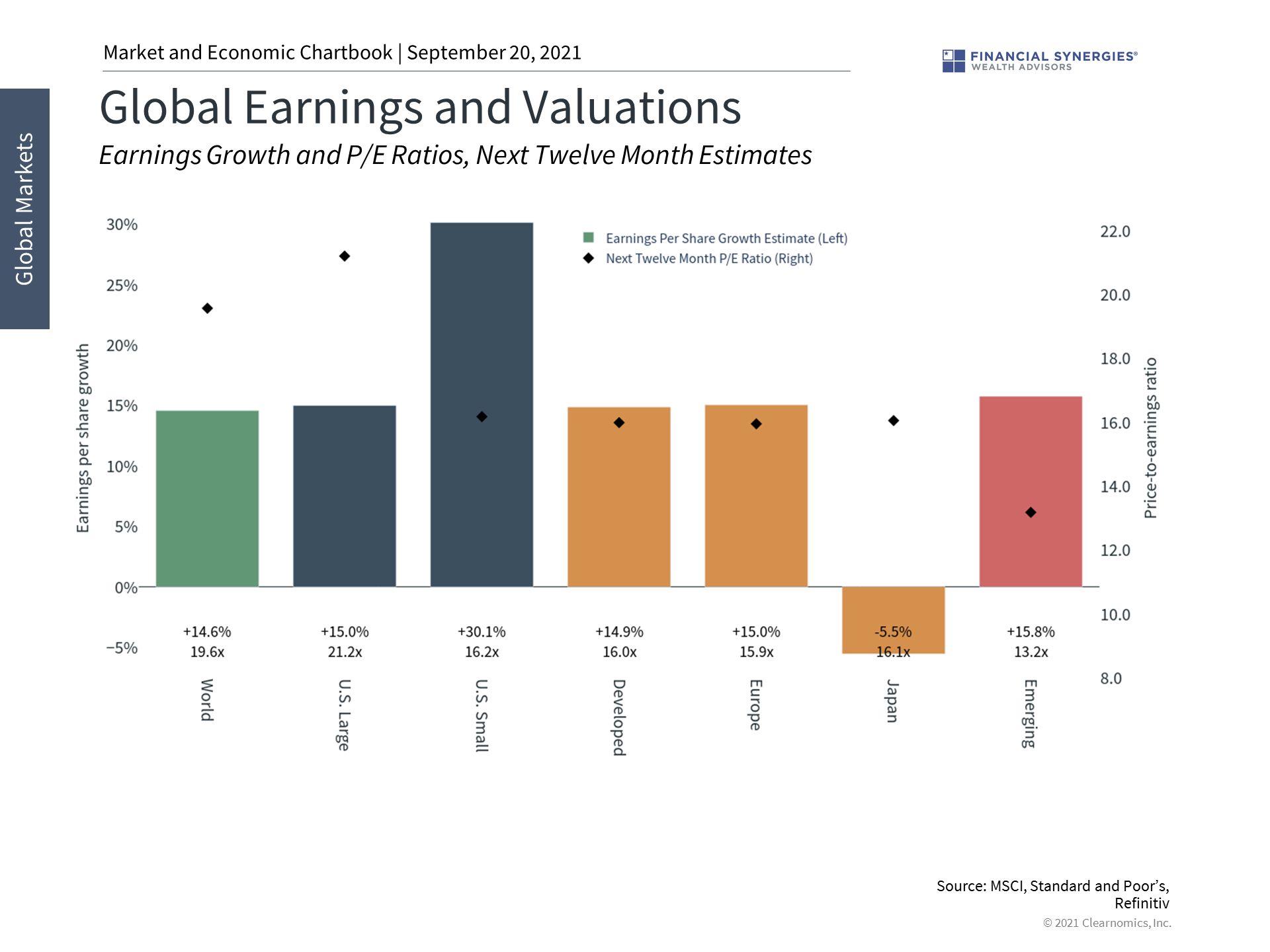 Unlike U.S. and developed market stocks, emerging markets have faced significant volatility over the past several months. In addition, they have been slower to recover from the pandemic slowdown. As a result, their valuation levels are much more attractive than other regions despite comparable earnings growth rates.

3. Market corrections are normal – and impossible to predict 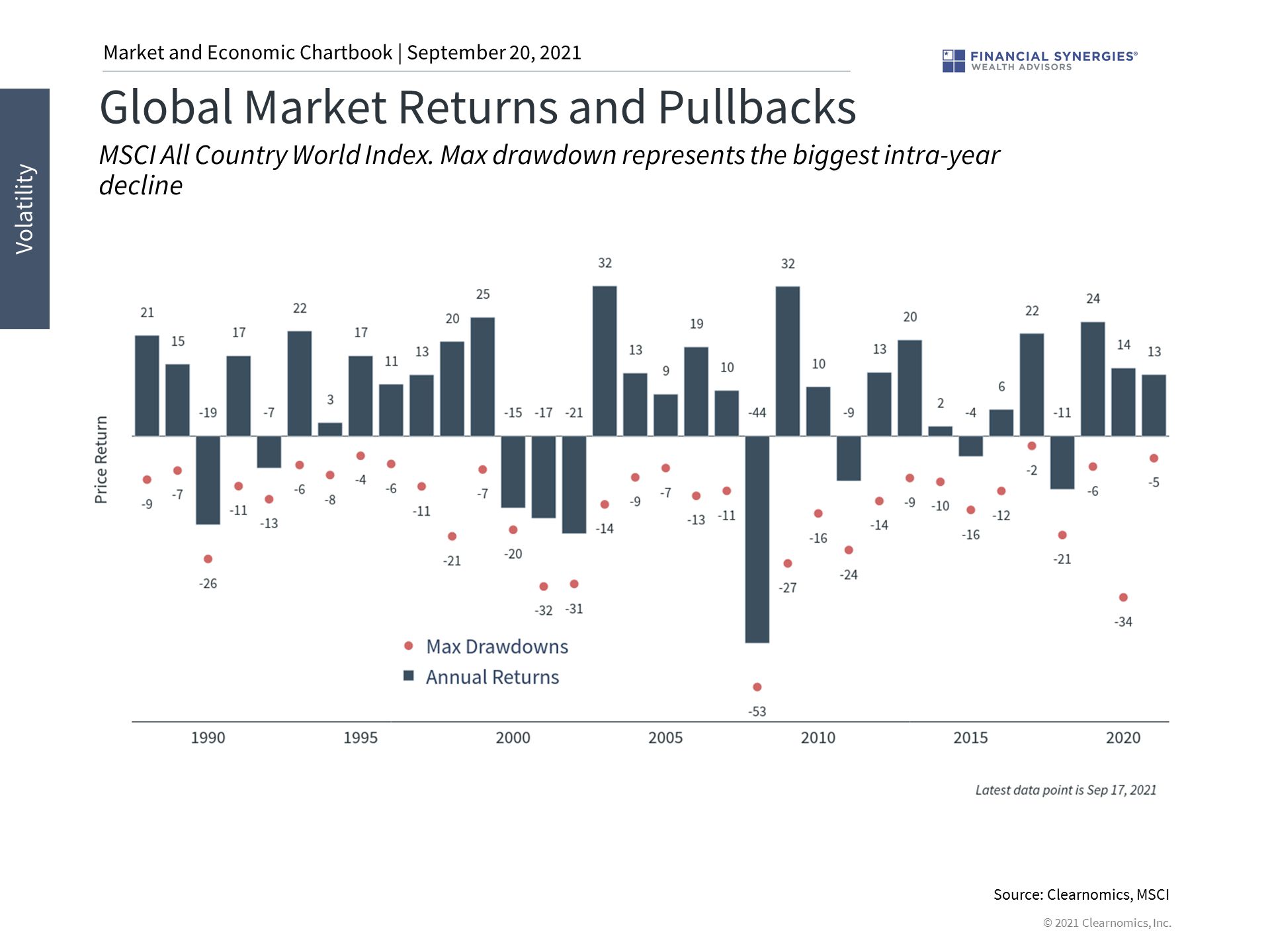 Markets don’t go up in a straight line. It can be rocky and ugly at times – pullbacks, corrections, bear markets, etc. are a part of the process, unfortunately.

September looks set to continue its losing streak. Let’s get these temporary setbacks out of the way now, so we can continue the inevitable climb to higher returns in the future.