Keep Your Eye on the Ball

With investing, focus on the years instead of days or weeks. Sounds simple, but it’s difficult in practice.

Investors have grown uneasy over the past few weeks as stock and bond markets have swung in both directions. Although last week’s jobs report confirmed that the economy is recovering steadily and the new $1.9 billion stimulus package passed by the Senate will provide even greater support, there are fears that the market has run too far too fast. This echoes many investor concerns over the past several years, including last spring when the market began its recovery.

From the perspective of markets, there are two competing views on the recent jump in interest rates. Rising rates and a steepening yield curve could mean that the economy will overheat, sparking runaway inflation and forcing the Fed to pull the plug sooner than expected, all of which may be bad for both stocks and bonds. On the other hand, rising rates could simply be the result of a recovering economy which is good for stocks in the long run. The tension between these two views creates uncertainty for the market.

At the moment, there aren’t many reasons to believe the former is more likely. Long-term interest rates naturally rise early in any economic recovery and the yield curve was much steeper in the early stages of the last two cycles. And while there may be reflation as prices recover from the economic shutdown, low inflation is a product of decades-long global forces that have little to do with COVID-19. That said, many sectors have performed exceptionally well over the past year and valuations could be elevated, potentially justifying some shifts in allocations.

Thus, in many ways, how everyday investors react to uncertainty is often more important that what they are reacting to. It isn’t simply that there are always worries on investors’ minds whether it’s the pandemic, federal deficit, retail investor trends, tech stocks, and other issues. It’s that, for many, every episode of market volatility feels different. There is a sense that this could be the big one – a correction or crash that makes it seem foolish to have ever been optimistic.

This is why the biggest hurdle to achieving financial goals is not about modeling interest rates – it’s overcoming one’s own behavioral and cognitive biases.

Although the last several weeks have felt volatile – no doubt amplified by daily headlines and coverage – the reality is that there has not even been a 5% pullback in the S&P 500. The stock market has fallen 20 days this year but has also risen 23 days, close to the slightly-better-than 50/50 average across history. Thus, there is often a disconnect between perception and reality when it comes to market behavior.

The key for long-term investors is that the stock market tends to rise over long periods of time even if it can swing wildly in the short run. How can this be if there are almost as many down days as up? The fact that markets are up slightly more than 50% of days compounds over time. On a monthly basis, the stock market has risen more than 60% of the time going back 30 years. On an annual basis, this percentage jumps to over 70%. Since 2003, the stock market has been positive 78% of years.

Like many things, the power of compounding works slowly over time and positive returns over any individual day, month, or year are never guaranteed. Market pullbacks and corrections may grab attention and headlines, but it is the slow building of wealth in the face of never-ending market fear that works in investors’ favor over the course of years and decades.

While there are valid market concerns around interest rates, valuations, the Fed and fiscal stimulus, the bottom line is that the economy is still recovering. Businesses small and large are seeing their top-line numbers improve and are rebuilding their balance sheets. Patience, discipline and perspective are needed as this plays out. Below are three charts that put these market moves in context.

1. Despite daily swings, the worst stock market pullback this year has only been 4% 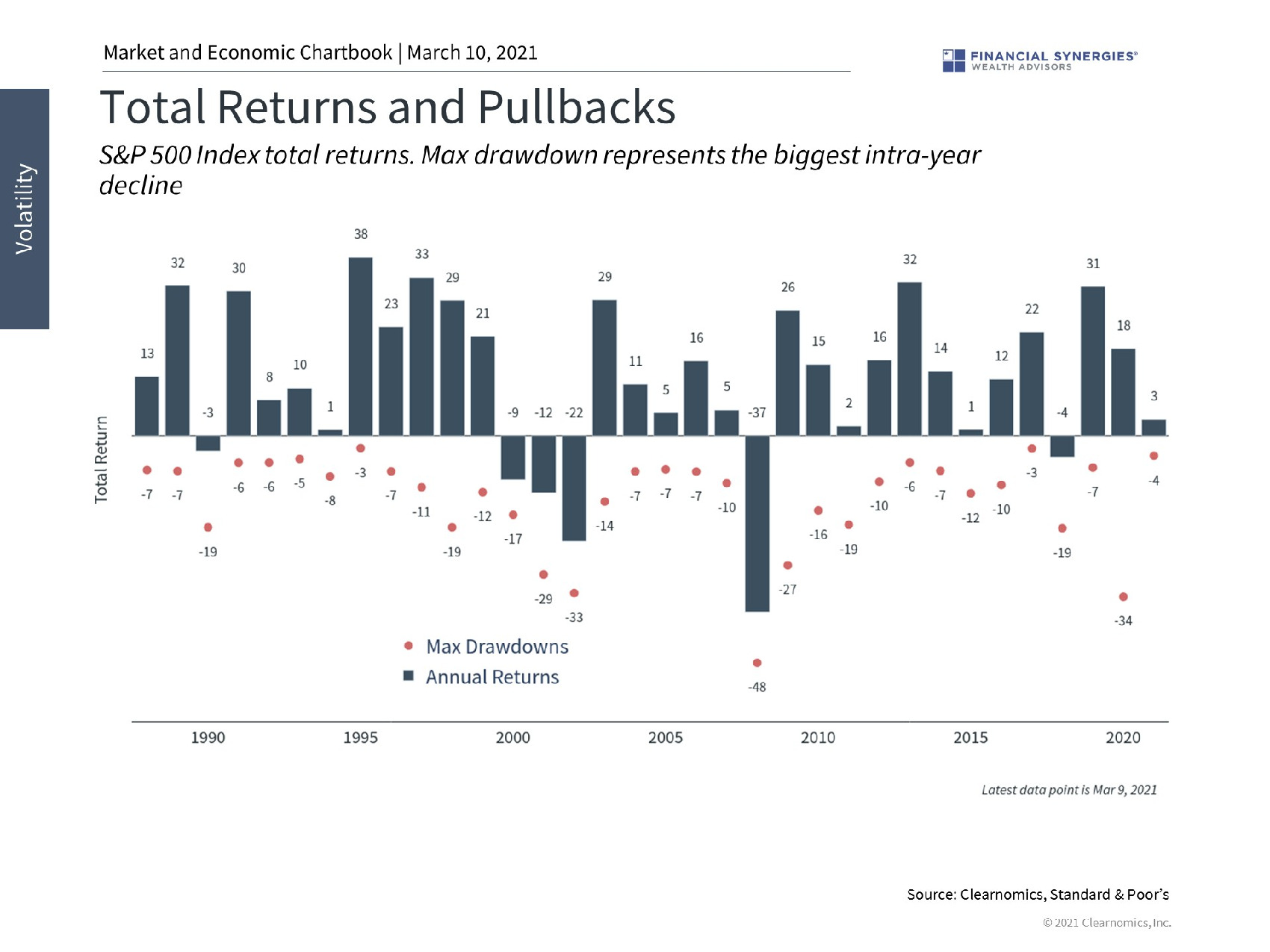 Although there has been much attention on daily market movements – with several moves larger than 1% over the past few weeks – the truth is that the largest pullback has been about 4%. This has been followed by several large gains too. The average year experiences a pullback of about 15% even though the majority of years end up positive.

2. The average year has many 5% pullbacks 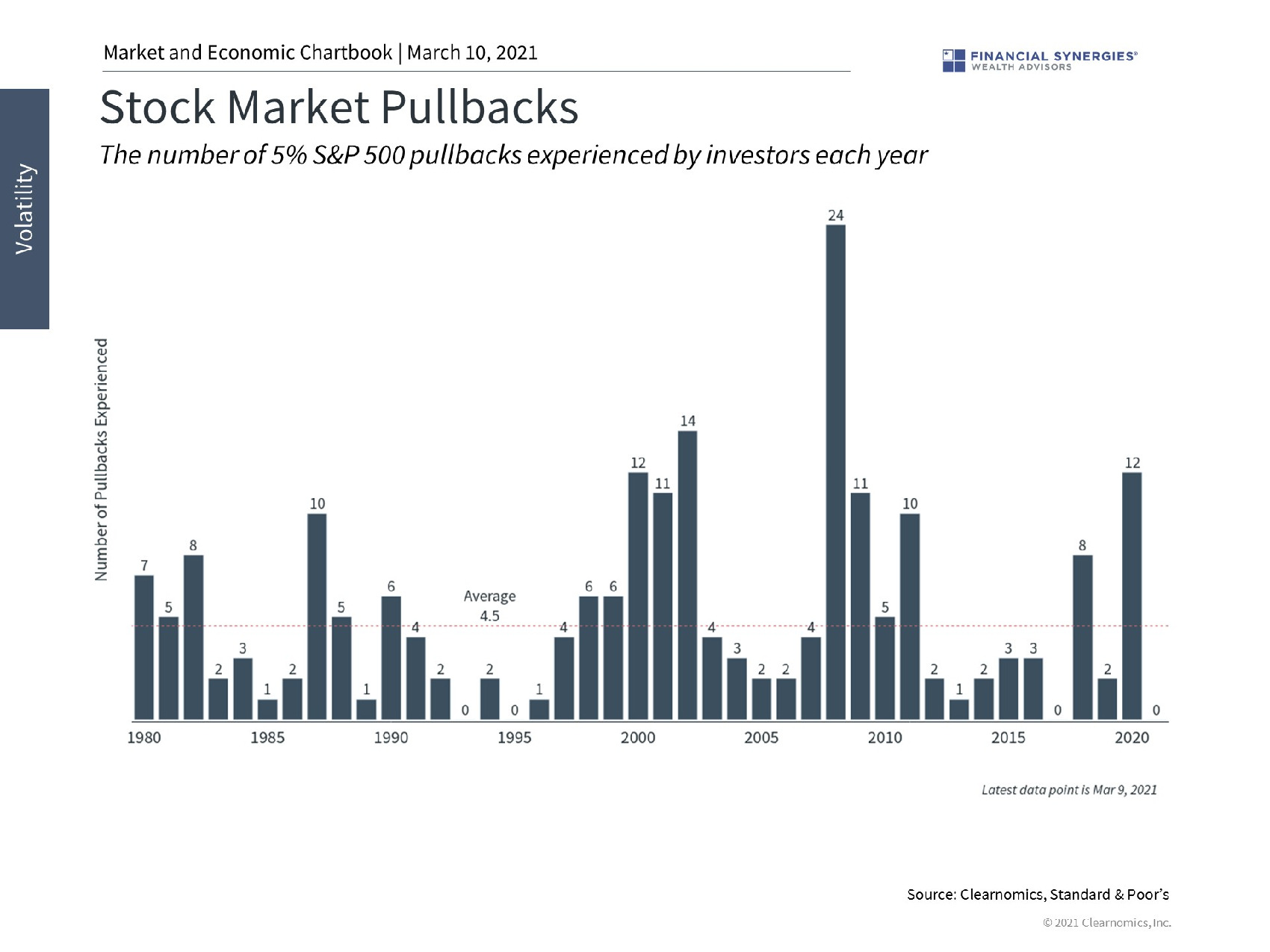 From a behavioral perspective, investors experience many 5% pullbacks in any given year. Last year, with the pandemic rattling markets, there were 12 such pullbacks – the highest since the 2008 crash. It may be surprising to some investors that there have been no such pullbacks so far in 2021.

3. Focusing on longer time frames is the key to success 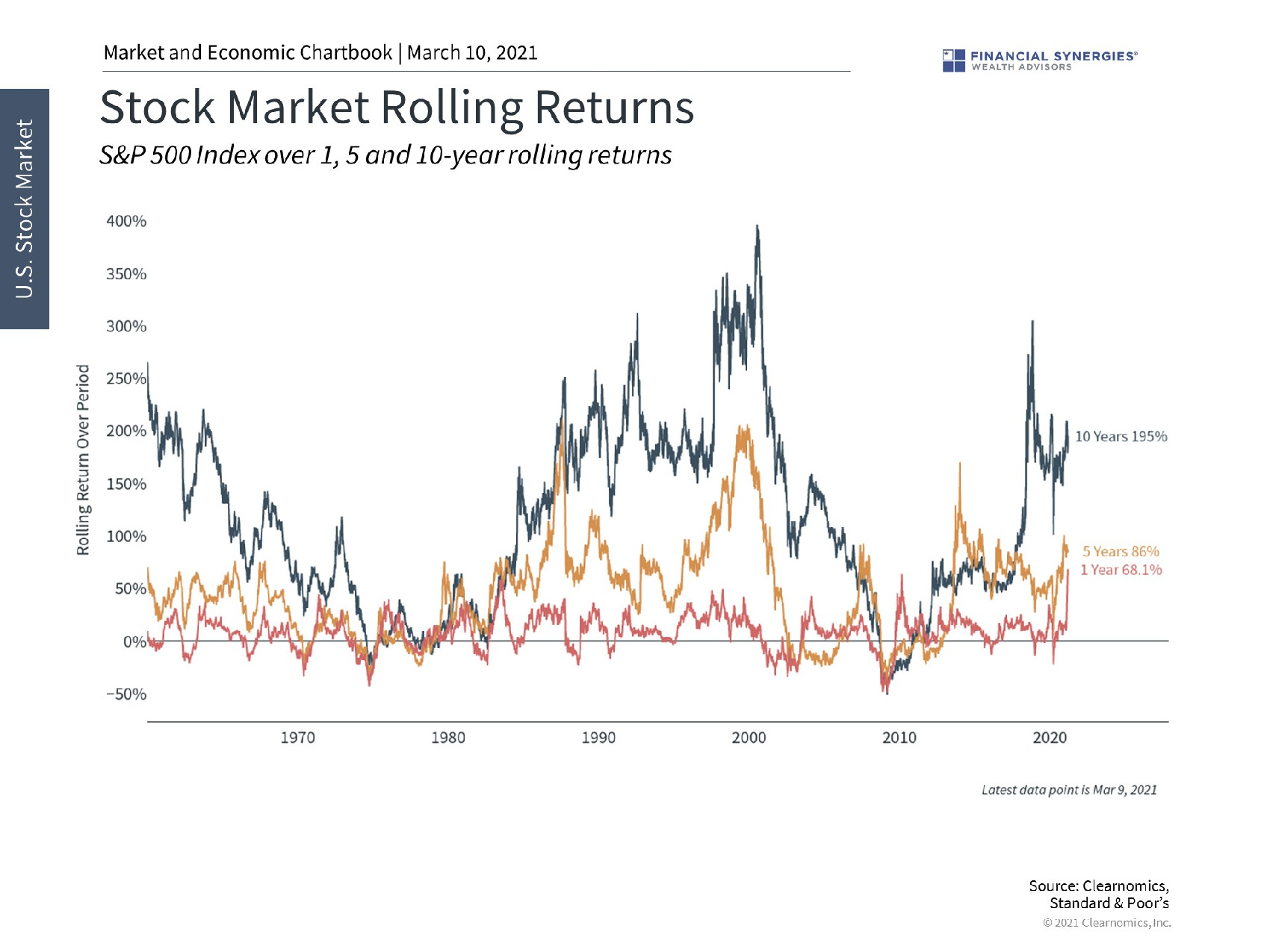 Staying invested over long periods of time is still the most important investment principal. Although there are always reasons to be concerned, staying focused over years and decades is what allows investors to build their savings into wealth.