Jobs Surprise and the Recovery

The latest jobs report is a positive (and huge) surprise for the economy. It shows that rather than losing an expected 7.5 million jobs in May, the economy gained 2.5 million. The unemployment rate also fell from 14.7% to 13.3% while the under-employment rate ticked down too. While it’s important to not place too much emphasis on a single month’s numbers, the fact that the economic data have turned sooner than expected bodes well for the economic recovery and investment portfolios.

Why did the economy gain jobs in May only one month after the worst jobs report in history? Whereas weekly jobless claims focus only on the number of jobs lost, the payrolls report shows the net change in jobs over a given month. This suggests two things.

First, the reopening of the economy in many parts of the nation has allowed some furloughed workers to be recalled to their jobs and for some that were laid off to find new work. The report showed that the number of temporarily laid off workers fell by 2.7 million.

Second, the pace of layoffs has slowed since March, allowing gains from the reopening of businesses to catch up in May. Even industries that have been hard hit showed some signs of recovery. In particular, leisure and hospitality as well as the food and beverage industry increased employment by 2.6 million after huge declines in April. Retail services also saw an increase of 368,000 jobs after losing 2.3 million the prior month.

While these data are positive, they only reflect the beginnings of the long recovery. The unemployment rate of 13.3% is still well above its peak of 10% during the 2008 financial crisis. Regaining 2.5 million jobs is positive but is only a fraction of the 18 million that are still lost. Weekly jobless claims are still coming in at close to 2 million per week and extended jobless benefits are set to run out at the end of July. Additionally, other backward-looking data may continue to show weakness in the economy, especially the Q2 GDP numbers when they are released in late July.

Markets are forward-looking even when investors find it difficult to be. While the economy and the nation still have a long way to go and there are risks around further outbreaks of the novel coronavirus, there is also a brighter light at the end of the tunnel. If confirmed cases and deaths from COVID-19 continue to decline, businesses are able to reopen safely, and consumer confidence reemerges, then many of the economic numbers could continue to improve. This could drive a recovery in corporate earnings and stock market valuations over the next 12-24 months.

As always, the best approach for long-term investing in uncertain times is to remain diversified and focused on financial goals. Below are three charts that help to put the new jobs data in perspective.

1. The jobs data show that 2.5 million jobs were recovered in May 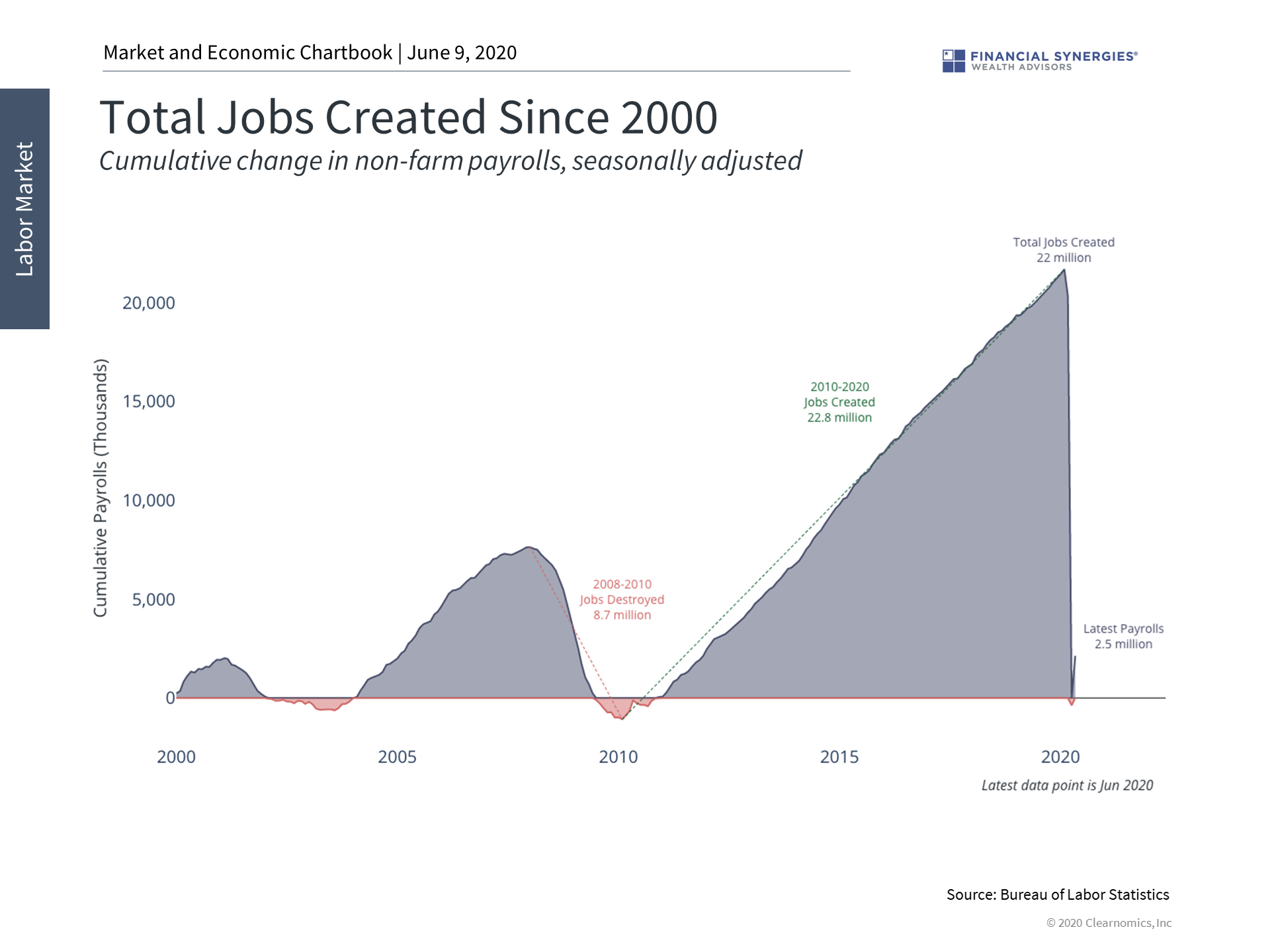 Recent payrolls data show that 2.5 million jobs were recovered in May. This was a surprise to many investors and economists who had expected 7.5 million jobs to have been lost during the month when much of the economy was still shut down. This is a sign that the slow reopening of the economy across the nation is bringing jobs back faster than expected.

2. This is positive news but there is still a long way to go 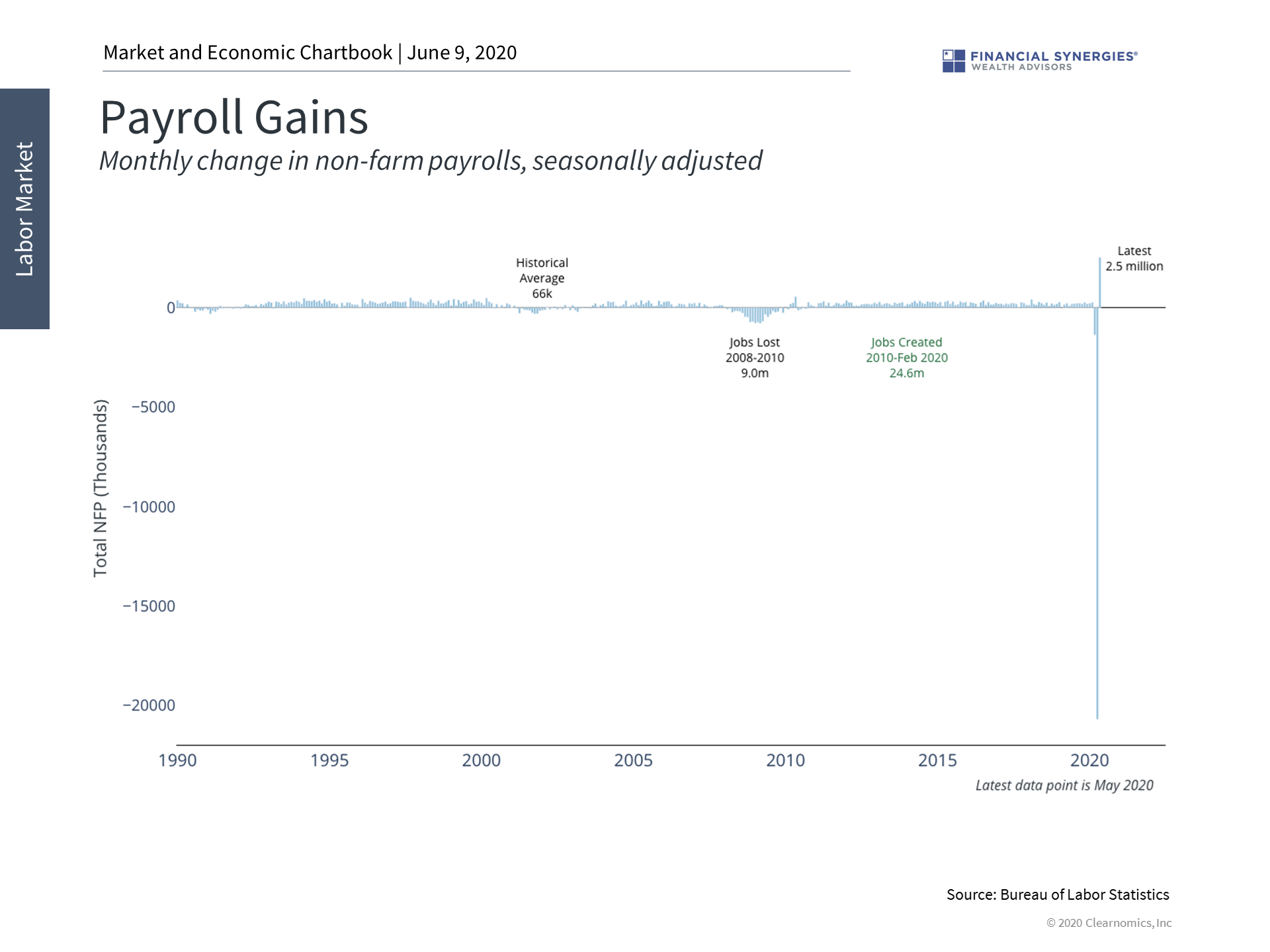 Despite the surprising jobs gain, the economy still has a long way to go to recover the 20M jobs that were lost in April alone. This will depend on how quickly and safely businesses are able to reopen and whether consumers feel confident returning to stores and spending money. 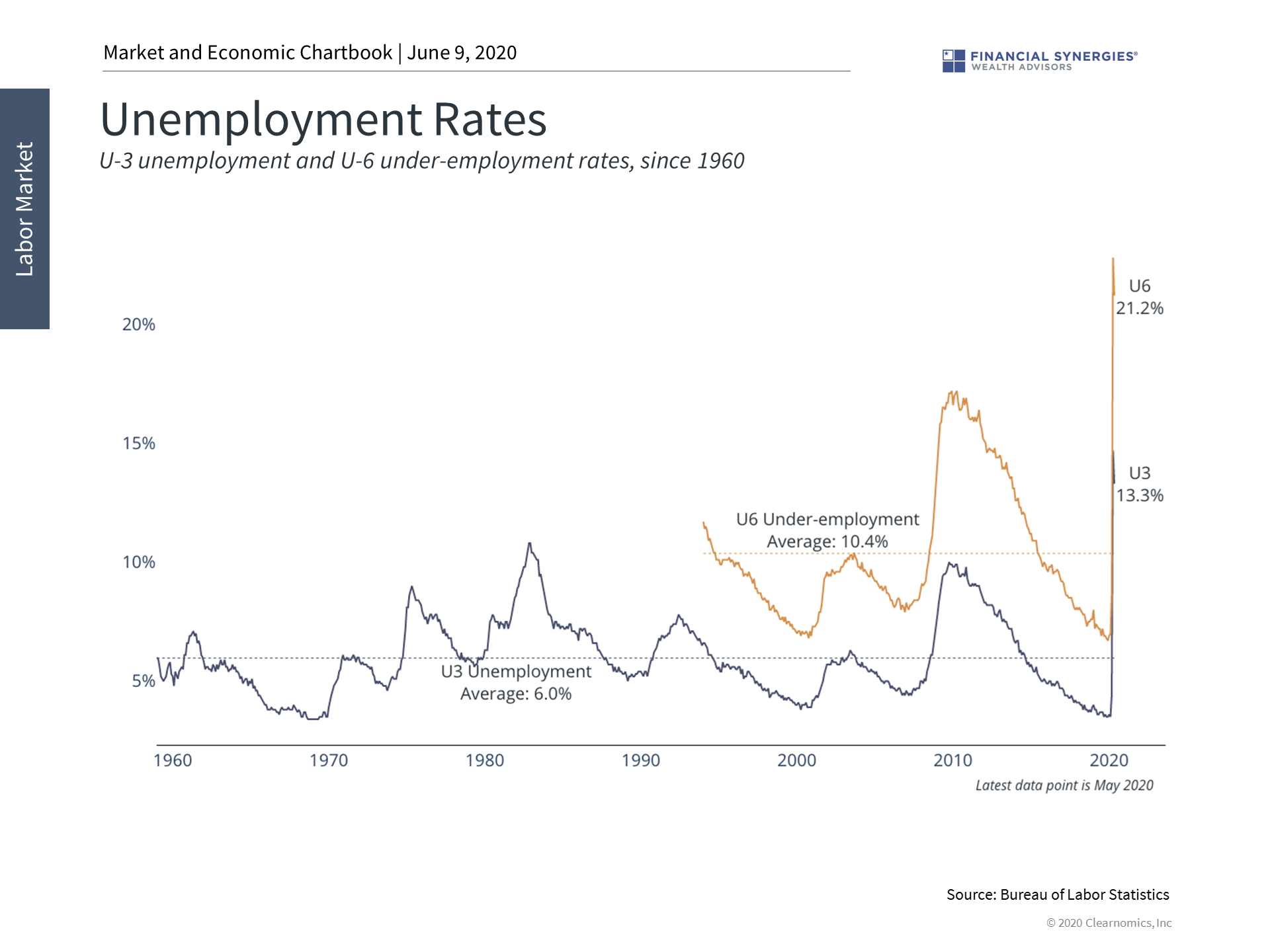 Unemployment also fell in May to 13.3%, compared to an expected rise to 19%. Still, this is far above the 10% peak experienced during the last recession, showing that the economy still has a ways to go.

All-in-all, I think it’s safe to say that this recovery has been faster than most expected. Let’s hope we can keep this momentum going.