Obviously high inflation continues to be a major problem. Not only does it impact consumers’ wallets but it also has wide-ranging implications for corporations, the broader economy, and investment portfolios.

However, it’s important to consider how inflation affects both sides of the income statement when making long-term financial decisions. After all, while expenses are increasing for consumers and businesses, inflation also allows corporations to raise prices.

The most recent Consumer Price Index report showed that prices rose by 1.3% over the month of June which amounts to 9.1% compared to the prior year. This is the fastest annual pace since 1981, when inflation was falling and since 1978 when inflation was rising. While nearly all price categories increased, suggesting that inflation is broad-based, by far the largest contributor was energy with gasoline prices rising 60%. Another report on the Producer Price Index showed that the prices charged by suppliers rose 11.3% on a year-over-year basis.

Inflation continues to accelerate both broadly and due to energy prices 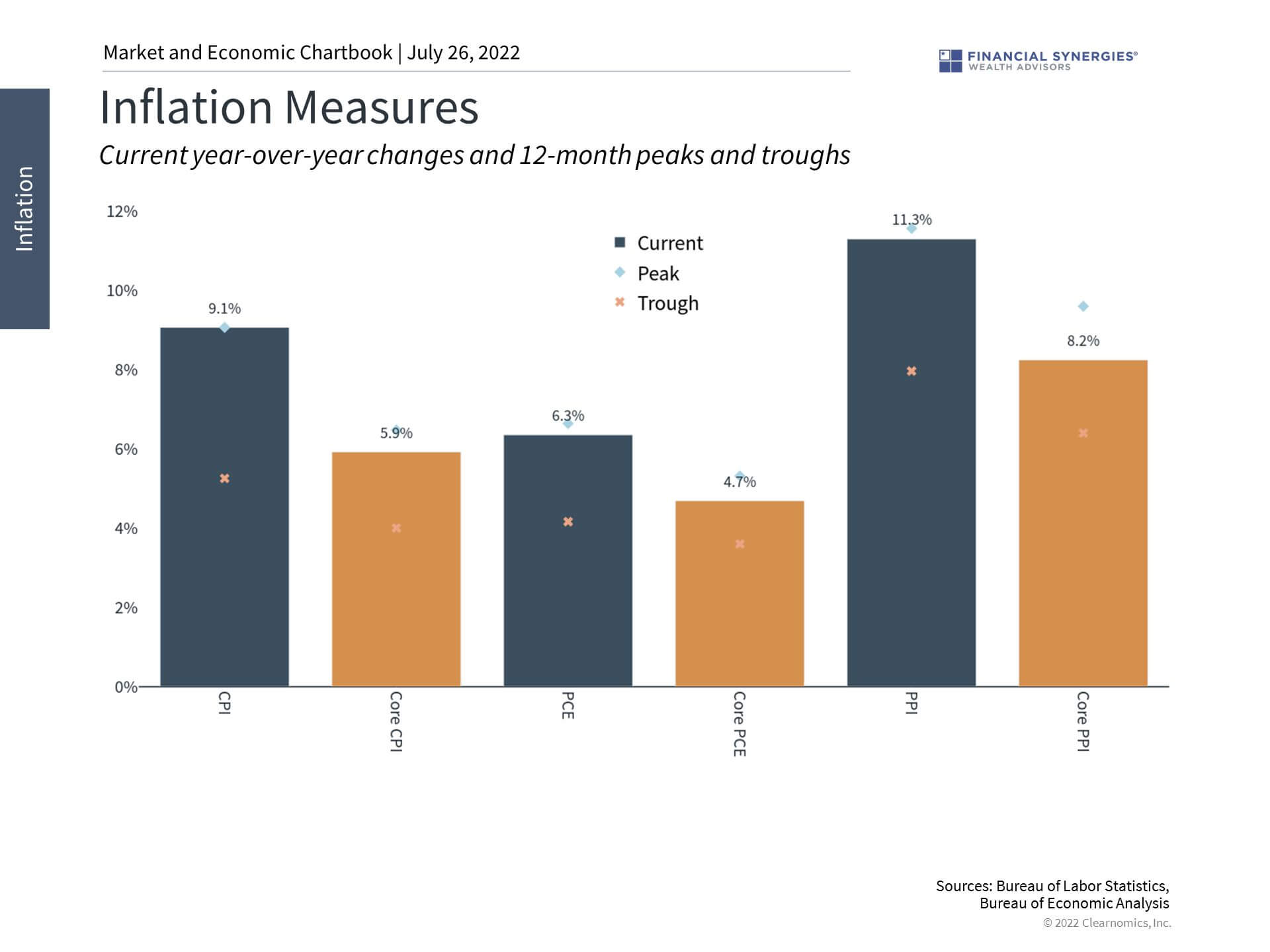 No matter how you slice it, inflation is at its hottest level in four decades. These reports all but lock in another 75 basis point rate hike by the Fed later this month and many are wondering if they may raise by a full percentage point.

However, there are some positive signs too. To the extent that energy and gasoline are the biggest contributors to inflation, it’s good news that oil prices have been stuck in a range since March, even falling under $100 per barrel briefly. What’s more, the price of wholesale gasoline produced by refiners, known as “Reformulated Blendstock for Oxygenate Blending” (or RBOB for short), has plummeted nearly 25% from its June peak. So, while the nationwide price of gasoline remains high at $4.50 per gallon, it has already fallen 10%. Relief at the pump, if it happens, couldn’t come soon enough since higher prices have weighed on consumer sentiment. Still, there are signs that consumers continue to open their wallets. Last week’s retail sales numbers grew 1% in June after shrinking the prior month, representing an 8.4% jump from last year.

This is partly due to inflation itself raising prices, but also because the average consumer is still doing well financially due to high savings rates over the past two years, despite the stock and bond market declines. Regardless of the cause, ongoing consumer spending, coupled with price increases, helps the top-line sales figures of public companies.

This makes the current earnings season even more important as a gauge of how companies are adapting to this inflationary environment. So far, companies are beating analyst estimates with Wall Street forecasts suggesting that S&P 500 profits may reach $225 per share by year end, an 11% year-on-year growth rate. Even if this decelerates, earnings could still grow faster than the historical average of 7 to 8%. Earnings growth helps to improve valuation metrics such as the price-to-earnings ratio which supports long-run returns.

Earnings are expected to grow across nearly all sectors 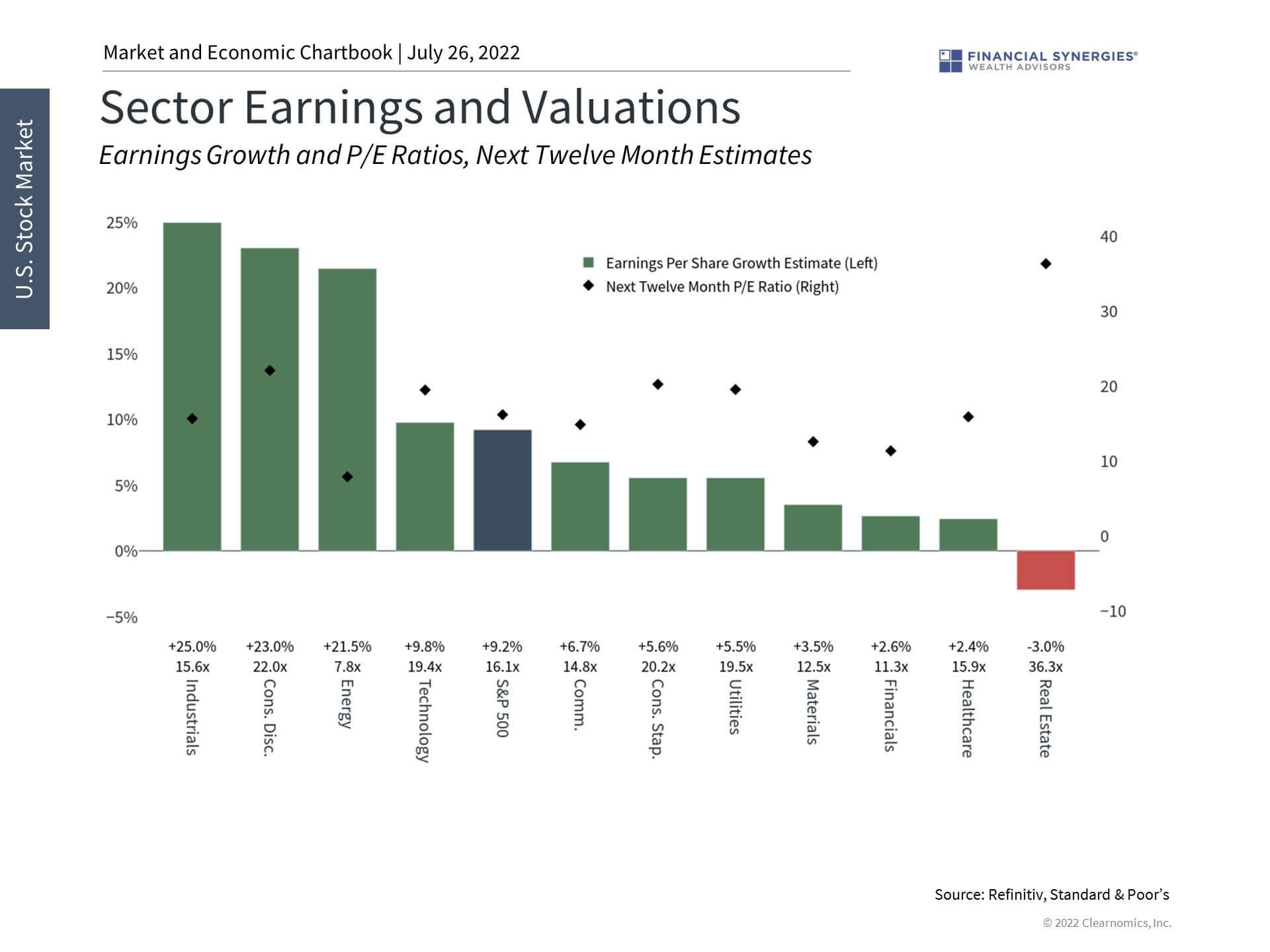 These patterns hold true across almost all sectors. Ten of the eleven sectors are expected to have positive earnings growth over the next year, with sectors such as industrials, consumer discretionary, energy and technology expected to grow earnings faster than the overall S&P 500. The exception is real estate which is directly hurt by rising mortgage rates.

History shows that as long as revenue and earnings growth remain steady, the stock market and investment portfolios can benefit over time. Thus, while inflation hurts the spending side of the equation for consumers and investors, it can help their investment portfolios. This is because investors don’t invest in the economy directly.

Instead, when the economy grows, portfolios benefit as companies earn more which supports stock prices over time. Thus, investing in stocks which benefit from rising prices can be a way for investors to hedge inflation risks in other parts of their everyday lives.

While inflation is challenging for consumers, especially when filling up their cars at the pump, it can also help corporate earnings. As always, it’s best to hold a portfolio that is diversified across different parts of the market that can benefit from rising prices.