Interest Rates and Sentiment Prove We Are Resilient

Nearly a year after the pandemic began, the continued rise of COVID-19 cases around the country is prompting many cities and states to enforce new restrictions. Just as they have since the first set of lockdowns, these measures will likely have a disproportionate effect on retail, dining, hospitality, and similar industries. And although a great deal has been learned about how the coronavirus does and does not spread since the beginning of the year, there are still difficult trade-offs between business activity and public health. Fortunately, the overall economy, the stock market and investors have shown that they can be resilient in the face of these restrictions.

Of course, after much of the economy bounced back in the early summer months, there is ongoing evidence that the second half of this recovery may be more difficult. Last week’s jobs report shows that hiring activity has slowed with 245,000 jobs recovered in November. Although this is a great number by historical standards – especially because more than half of the jobs lost during the initial shutdown have been recovered – it is a steep slowdown from the previous month’s 610,000 jobs and the average pace of over 2 million jobs per month since May. There are still 2.8 million Americans affected by temporary layoffs and 3.4 million fewer jobs in the leisure and hospitality sector. It may take years for these areas to heal.

From an investment perspective, we should separate the individual microeconomic stories from the macro trends that affect the broad market. Despite ongoing challenges, the fact remains that much of the economy has learned to balance productivity and safety. Those businesses that are able to operate remotely, at limited capacity, or with safety measures in place, have been doing so for many months. While this does not help those in hard-hit industries, it has been enough to stabilize financial markets, if not push them higher. Corporate profits in many sectors appear to be back on an up-trend, especially with the promise of effective vaccines on the horizon along with narrower credit spreads and the possibility of another stimulus bill.

This has benefited investors beyond just stocks reaching all-time highs. Interest rates, for instance, fell to historic lows earlier this year. As recently as the summer, the 2-year Treasury yield reached 0.1% and the 10-year 0.5% – levels not reached even during the 2008 financial crisis. While they are still extremely low, they have recovered somewhat with the 10-year approaching 1%. This contrasts with many countries in Europe where entire yield curves are in negative territory.

There are still significant challenges for those investors who rely on their portfolios for income. However, rising interest rates are also a sign of greater economic optimism for the years to come. After all, interest rates reflect both expected inflation as well as real GDP growth. The fact that rates have risen implies that investors generally believe the worst is behind us – as far as the economic impact of this pandemic and recent political uncertainty are concerned. Whether this proves to be the case has yet to be seen, but it is a positive sign nonetheless.

Other measures of investor sentiment have recovered in the past few months. One survey of bullishness is at its highest level in nearly three years – a fact that is consistent with the stock market hovering around all-time highs and rising yields. Although sentiment measures can often be a trailing indicator, reflecting what has already happened rather than what will happen, this is a sign that investors are taking day-to-day headlines more calmly.

This does not mean that the pandemic is over, there won’t be more economic surprises, or that markets will calmly rise forever. Instead, these data reinforce the fact that investors are justified in sticking to their financial plans and asset allocations – and have already been rewarded for doing so this year.

1. The jobs recovery is slowing 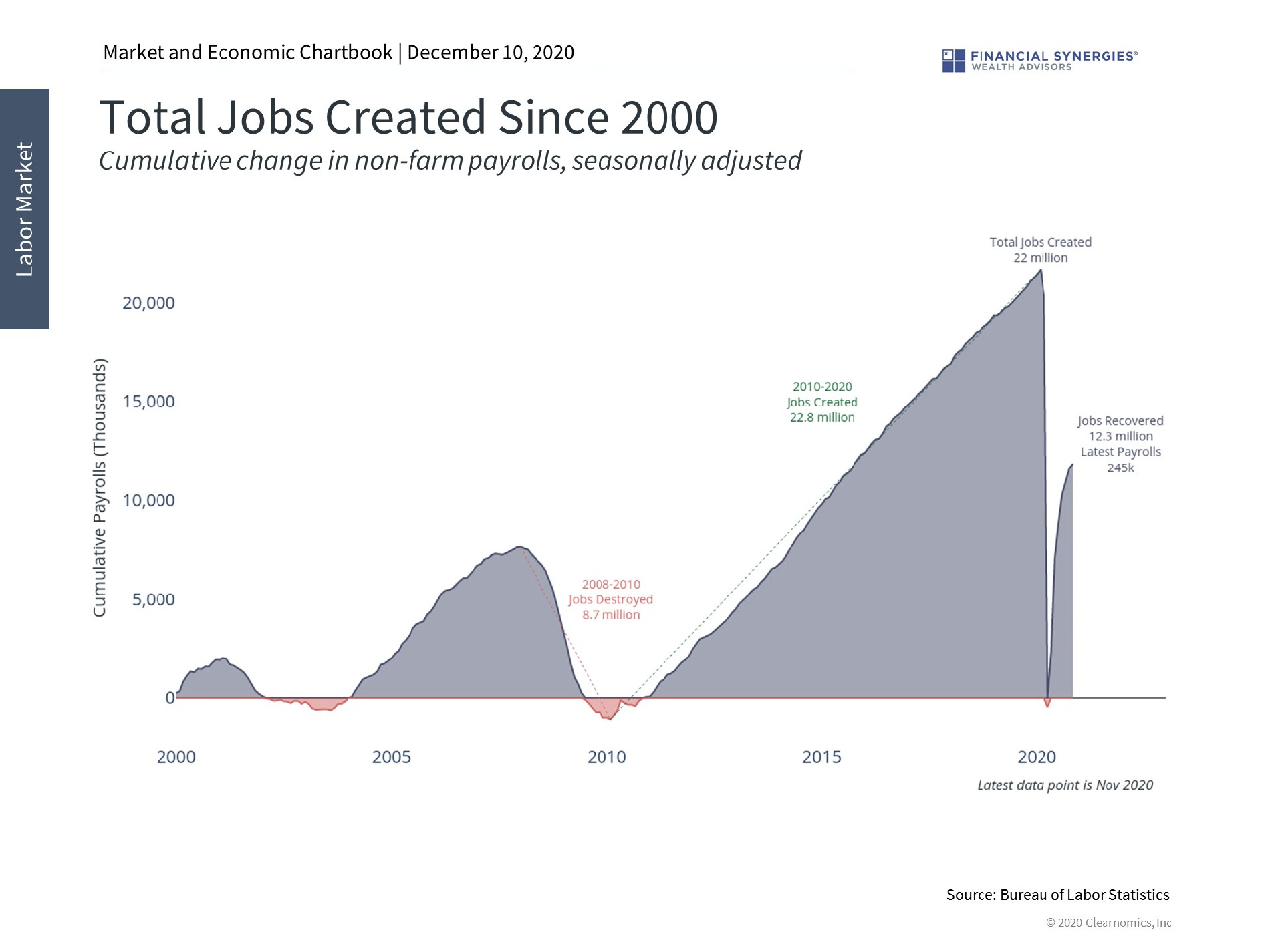 With more than half of the jobs lost during the pandemic now recovered, the second half of the recovery may be more difficult. November’s job gain was the slowest since May due to new restrictions and the on-going impact on industries such as dining, retail, leisure and hospitality. 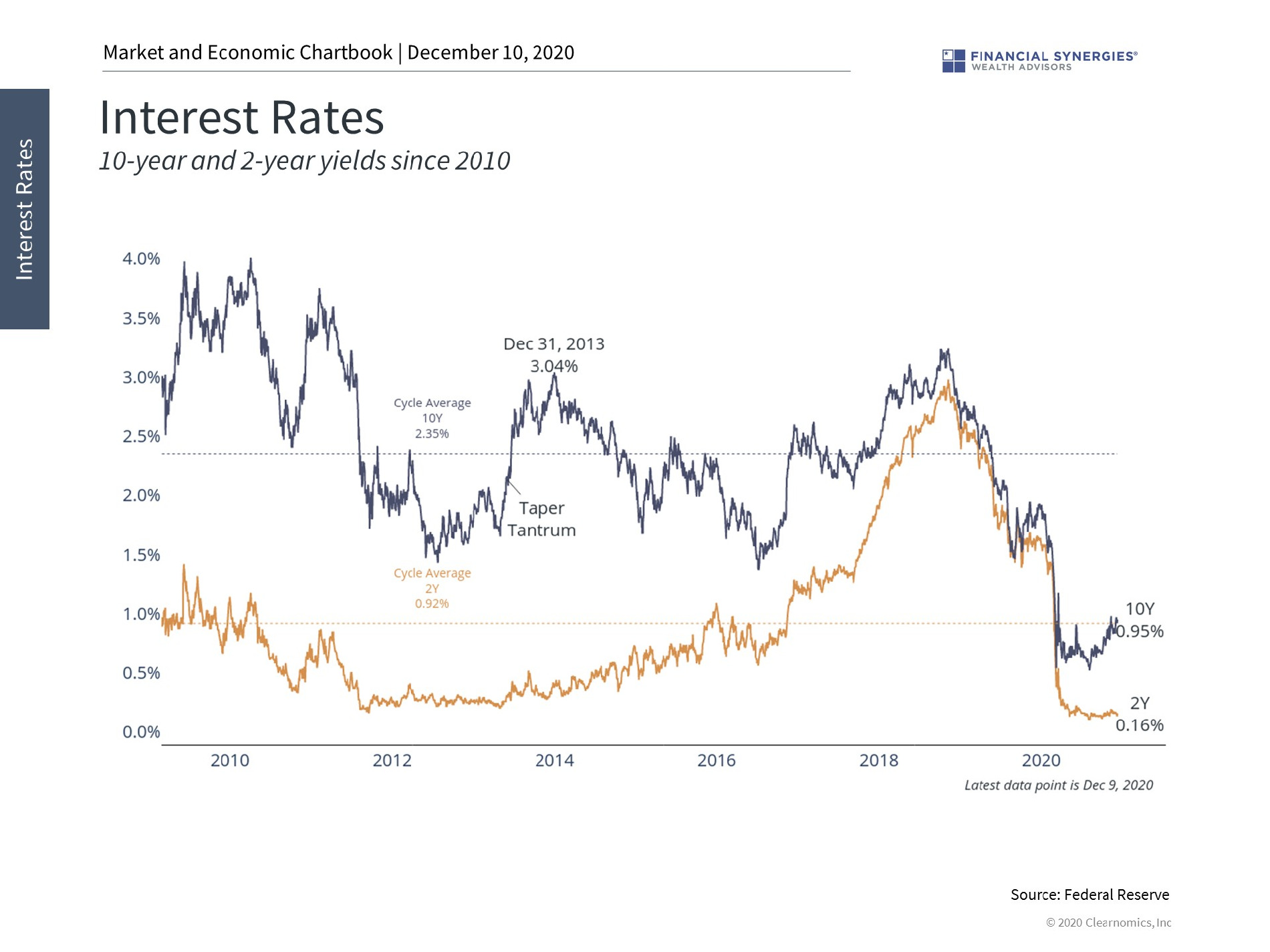 Despite on-going economic challenges, interest rates have recovered a bit from the historic bottoms reached earlier this year. The U.S. 10-year Treasury is nearing 1% for the first time since the pandemic hit. Although it will continue to be hard to generate income from such low yields, these are signs that investors are more optimistic about the economy.

3. Investor sentiment has recovered as financial markets have stabilized 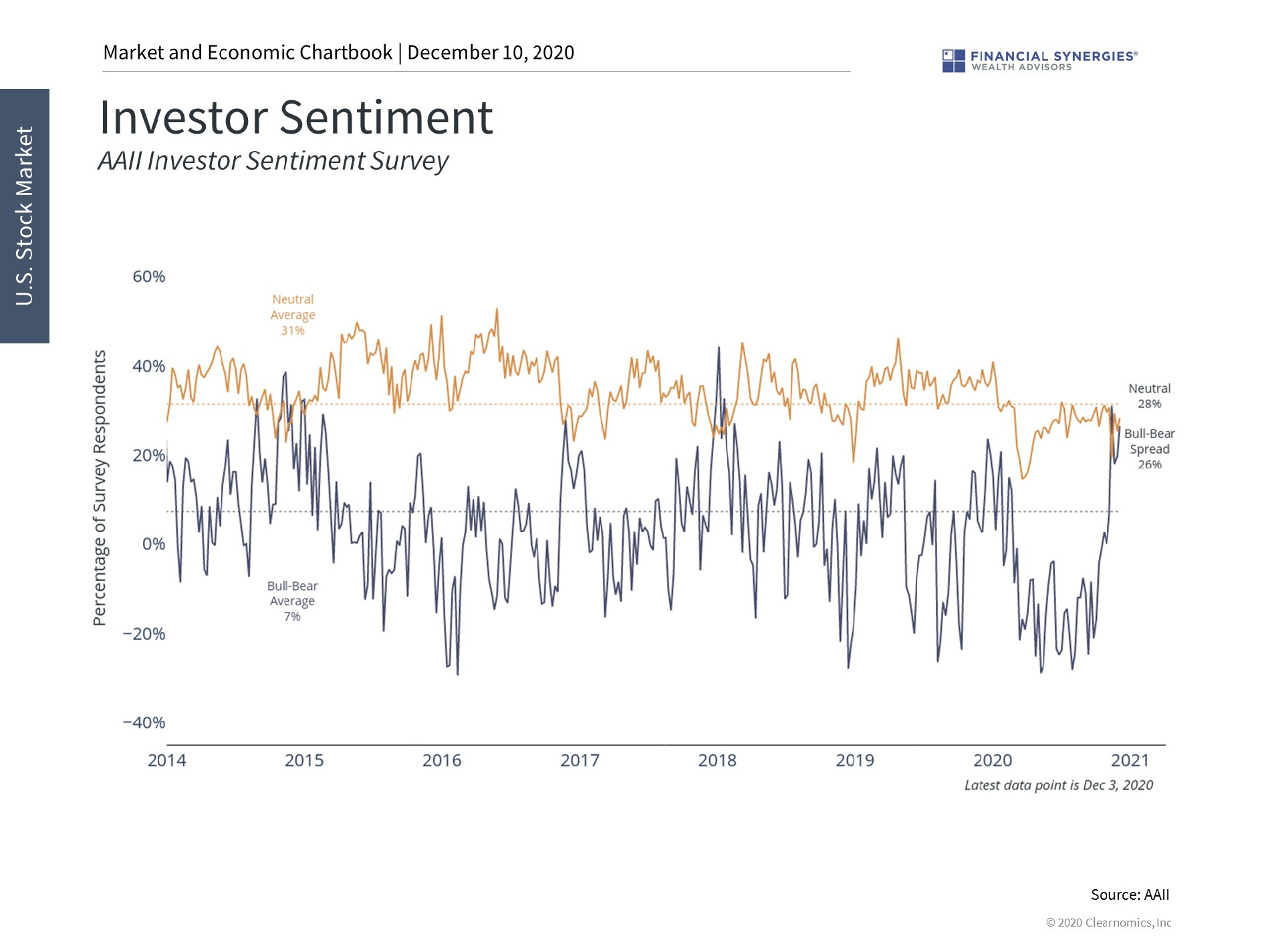 Many signs of investor sentiment have also rebounded. The AAII Investor Sentiment survey, for instance, shows that the spread between those reported to be bullish vs bearish is at its highest point in nearly three years. While this can be backward-looking, it is further evidence that investors are taking new developments in stride.

The second half of the recovery will be more difficult until there are public health breakthroughs. Still, there is evidence that the economy, the stock market and investors are resilient.