With the latest $1.9 trillion stimulus package now signed into law, over $5 trillion has been authorized over the past year to combat the economic impact of the COVID-19 pandemic. Like its predecessors, this bill provides checks to households, supports small businesses, extends unemployment insurance, funds healthcare initiatives, and more. Although this spending is not without controversy, that this level of relief has been passed one year after the lockdown began speaks to the long-term impact of the economic shutdown.

The fact that stimulus spending at this moment is controversial is due to the nature of the recovery and the ability to provide targeted relief. While the overall economic recovery has been strong and is expected to accelerate throughout 2021, this is not universally the case. This divergence is often referred to as a “K-shaped recovery” in which some sectors (tech, online retail, etc.) have not only bounced back but grown, compared to sectors at the “epicenter” (brick-and-mortar retail, restaurants, travel, etc.).

Although this disparity has clearly impacted stocks, the rotation from pandemic-resistant sectors to epicenter ones has already taken shape. This is partly due to the strong performance of growth and tech sectors over the past twelve months, high valuations among those sectors, and the re-opening of the economy alongside vaccine distribution. Year-to-date, the energy, financials, industrials and materials sectors have led the market while information technology and healthcare are flat. The equal-weighted S&P 500 has also outperformed the standard market-weighted index – an indication that gains are broader than at the start of the recovery.

In the context of this economic and market turnaround, the latest stimulus package raises three important considerations for investors. First, many investors are concerned about federal spending over the past year. During the government’s 2020 fiscal year (which ends in September), the CARES Act pushed the federal deficit to 15% of GDP – even worse than during the 2008 financial crisis when it reached 10%.

In 2021, federal spending will continue to increase but GDP will also improve, helping to keep this ratio in check. Historically, the deficit jumps in times of crisis but then moderates as spending returns to normal and the economy grows. Of course, “normal” over the past 70 years has involved persistent deficits.

While it’s unclear what the limits of the federal debt will be, it’s well understood why the government was forced to spend to keep the economy on life support over the past year. The question is whether there will be political pressure to improve budgetary discipline as the recovery continues.

Second, the stimulus bill will help to support those individuals and households who have been directly hit by the pandemic. However, the average household has been financially strong over this period. Not only did many jobs return quickly, but the stock market increased in value, home prices jumped, and savings rates improved. This suggests that many households have a greater cash cushion today than in the past. This increases the possibility of a boost to the economy as consumer confidence and spending improve in the months and quarters to come.

Finally, business activity has recovered remarkably well. By many measures, industrial and manufacturing activity in the U.S. is growing at the fastest pace in 3 years.  Job gains have accelerated in recent months and there are now nearly 7 million open positions across the country – not too far from the historic pre-COVID peak. The market has begun to reflect this reversal as manufacturing-related sectors, including ones tied to commodity prices, have surged.

Thus, while there are still many uncertainties surrounding the recovery, the situation has improved dramatically from just a year ago. Although the stimulus package is not without controversy due to its size and timing, it’s clear that many individuals and businesses still need support. Below are three charts that put this economic picture in context. 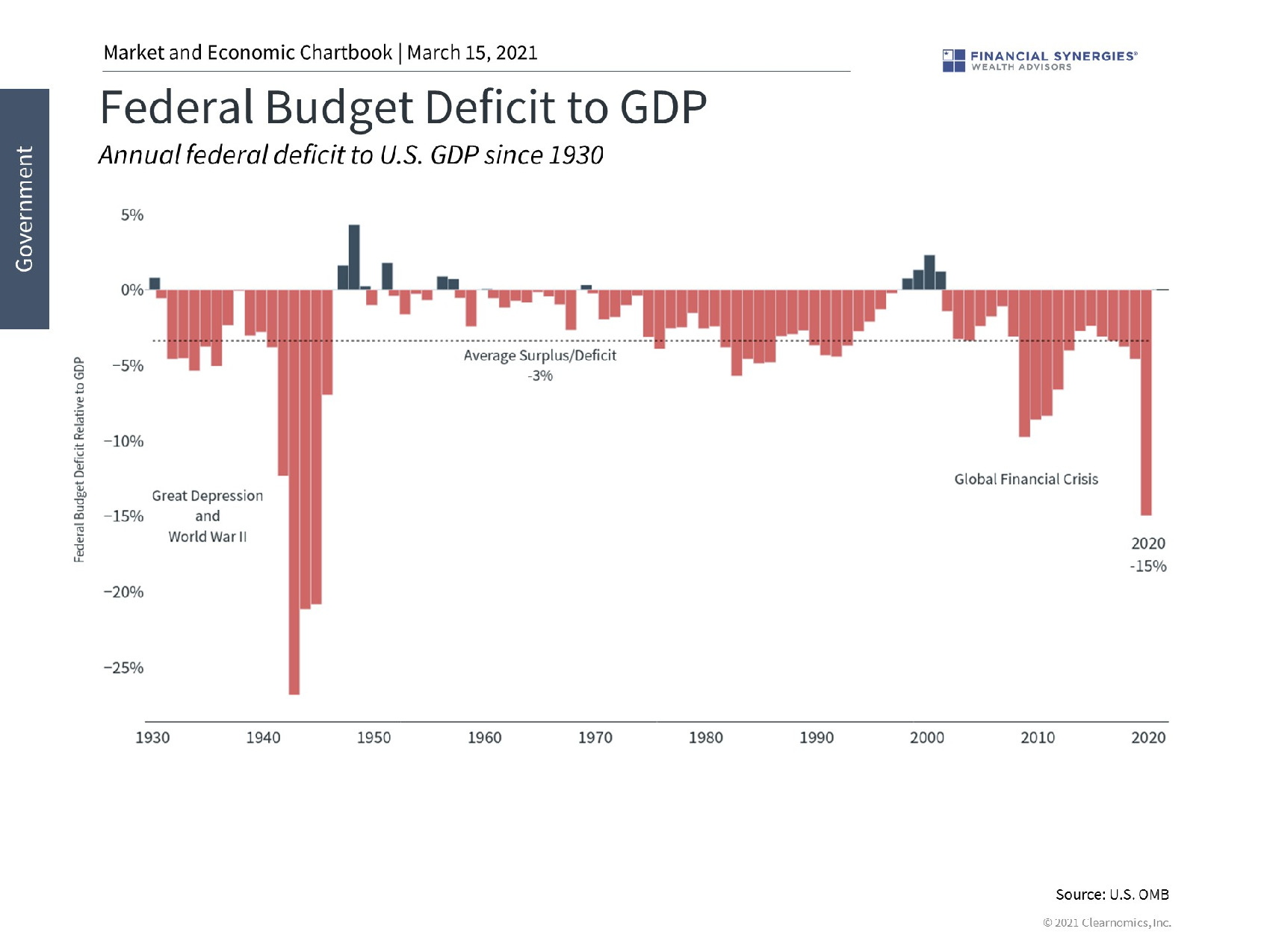 History shows that the federal budget deficit tends to expand during times of crisis. This was true during the Great Depression, World War II, and the global financial crisis. The question is whether spending will moderate once the crisis subsides. While stimulus spending continues, a growing economy will also improve this outlook over time. 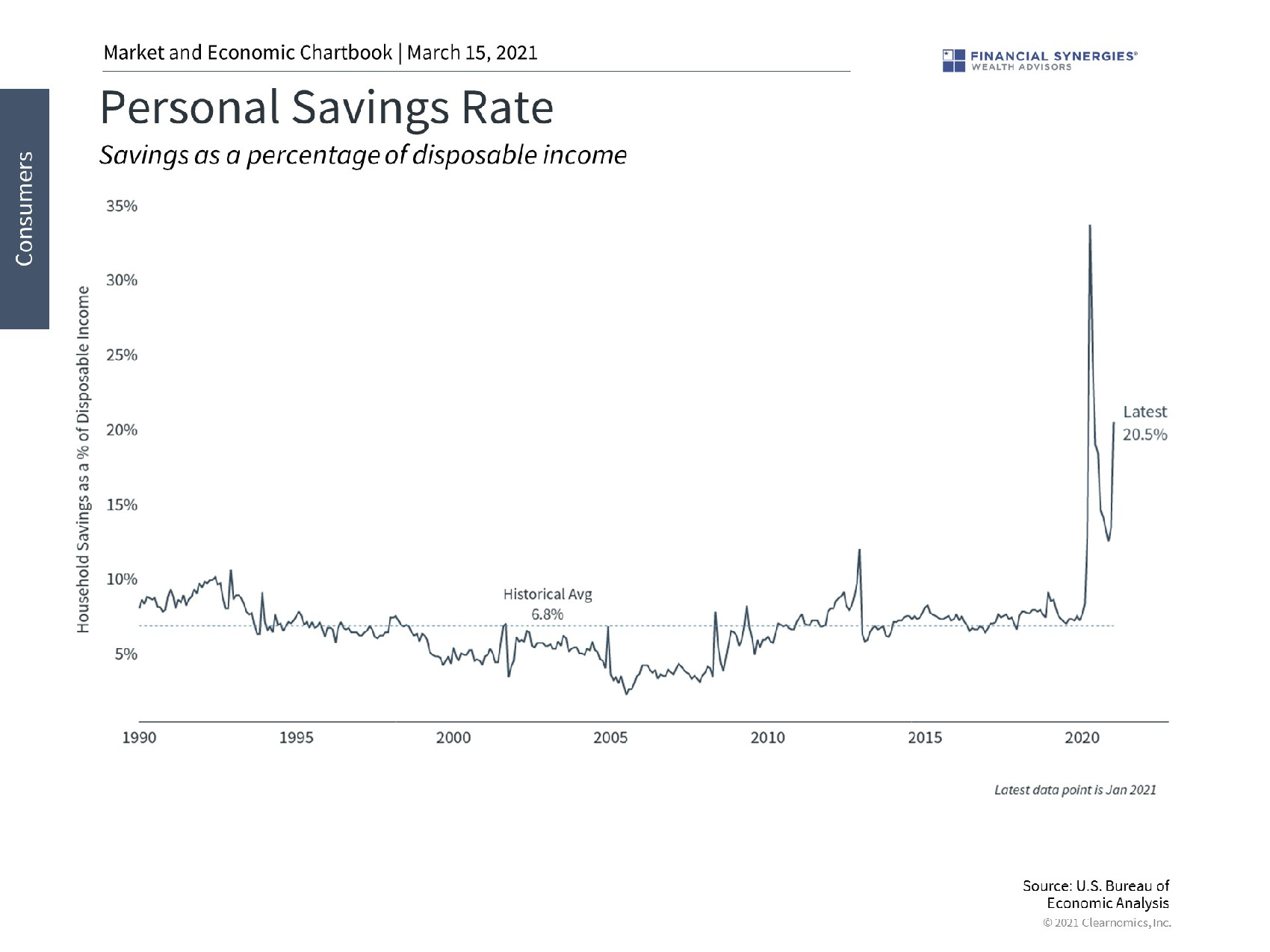 Household savings have remained high even as the economy has improved and consumer spending has returned. In the short run, this is a sign that consumers are cautious. However, it is also a positive sign for the health of consumer finances and for a possible future increase in consumer spending. 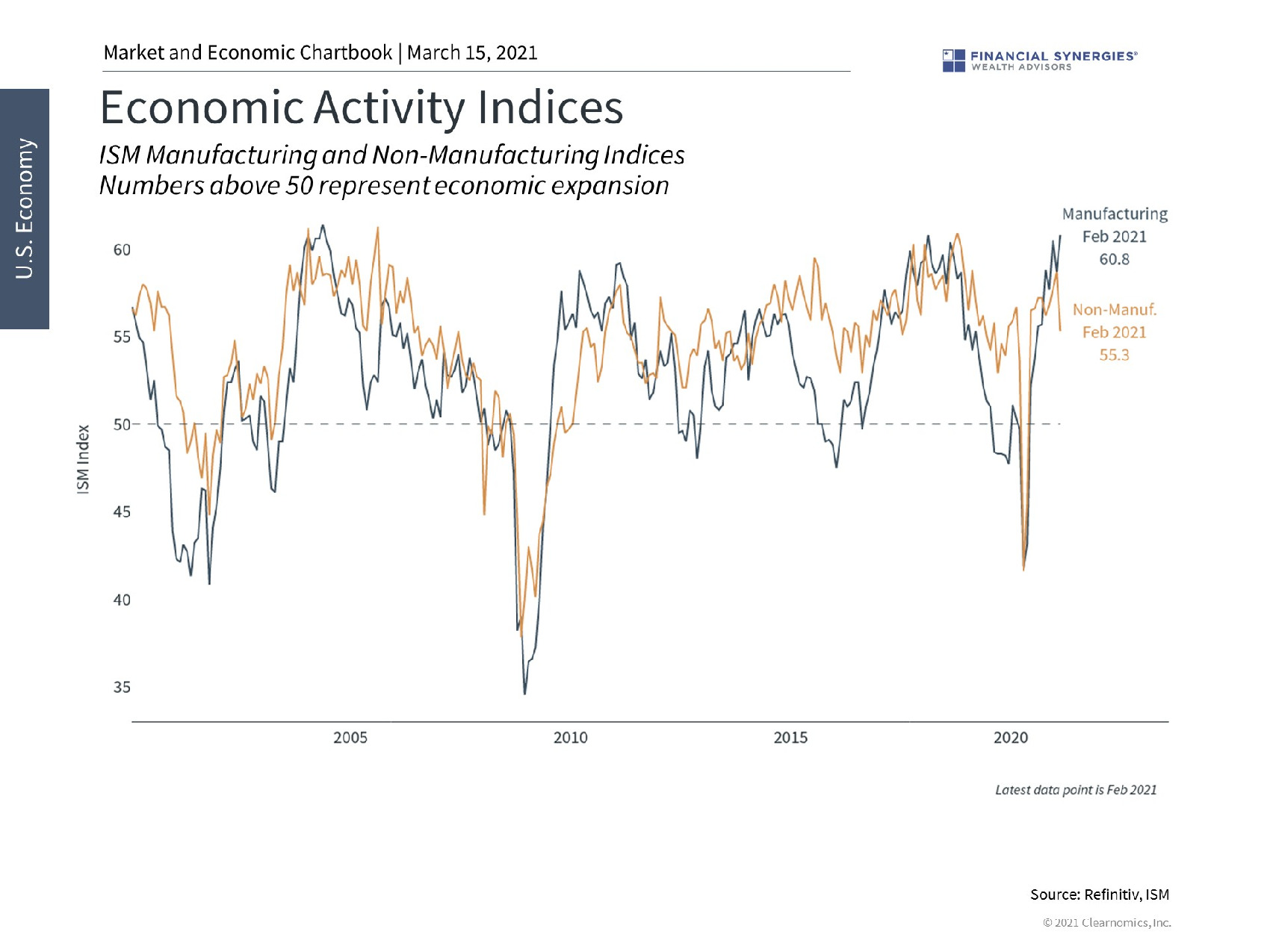 Industrial activity continues to accelerate, a good sign for overall economic growth across the country.

The latest stimulus package could help to cushion many parts of the economy as the recovery continues. Continue to focus on the light at the end of the tunnel as markets adjust to this better outlook.