The stock market continues to react to coronavirus headlines on a daily basis – with both negative and positive market swings. As the death toll rises (primarily in China at the moment), the fact that this is a human tragedy and not just an economic or financial one should not be diminished.

However, from an investment perspective, it’s important to not over-react to daily headlines, especially ones that are extremely uncertain. While the impact on the Chinese and global economies won’t be known for a long time, recent data suggest that the U.S. economy is still quite healthy. A stable and growing economy is the foundation of long-term portfolio returns.

Last Friday’s jobs report provided further evidence that this is the case. 225,000 non-farm jobs were added in January which significantly exceeded economists’ expectations. In total, about 22 million new jobs have been created since 2010 and, even after a decade of growth, new jobs are still being added at a pace of over 2 million per year.

The unemployment rate did increase slightly to 3.6% – still nearly the lowest in half a century – but only did so because more Americans re-entered the labor force after being on the sidelines. The evidence of this is a rising “labor force participation rate” which measures the proportion of Americans working or looking for work. This percentage plummeted after the financial crisis and has until recently been flat since 2013.

For many investors and economists, the labor force participation rate is a key metric for determining how long this cycle might last. This is because an economy that runs out of workers would eventually overheat – either growth would slow, wages and inflation would rise, or both. The fact that Americans who have been on the sidelines are re-entering the workforce is a sign that perhaps we are not at “full employment” just yet.

What this mean for investors, amid global public health concerns, is that the underlying foundation of diversified portfolios – a stable economy – is still intact. While we might debate the specific rate at which the economy can grow, the ultimate toll of the coronavirus, and how these factors might impact corporate profits in 2020, it’s clear that there are still few signs of a recession. Given the circumstances, it’s important for investors to stay disciplined in their portfolios in order to achieve their financial goals.

Below are three charts that put these economic trends in perspective: 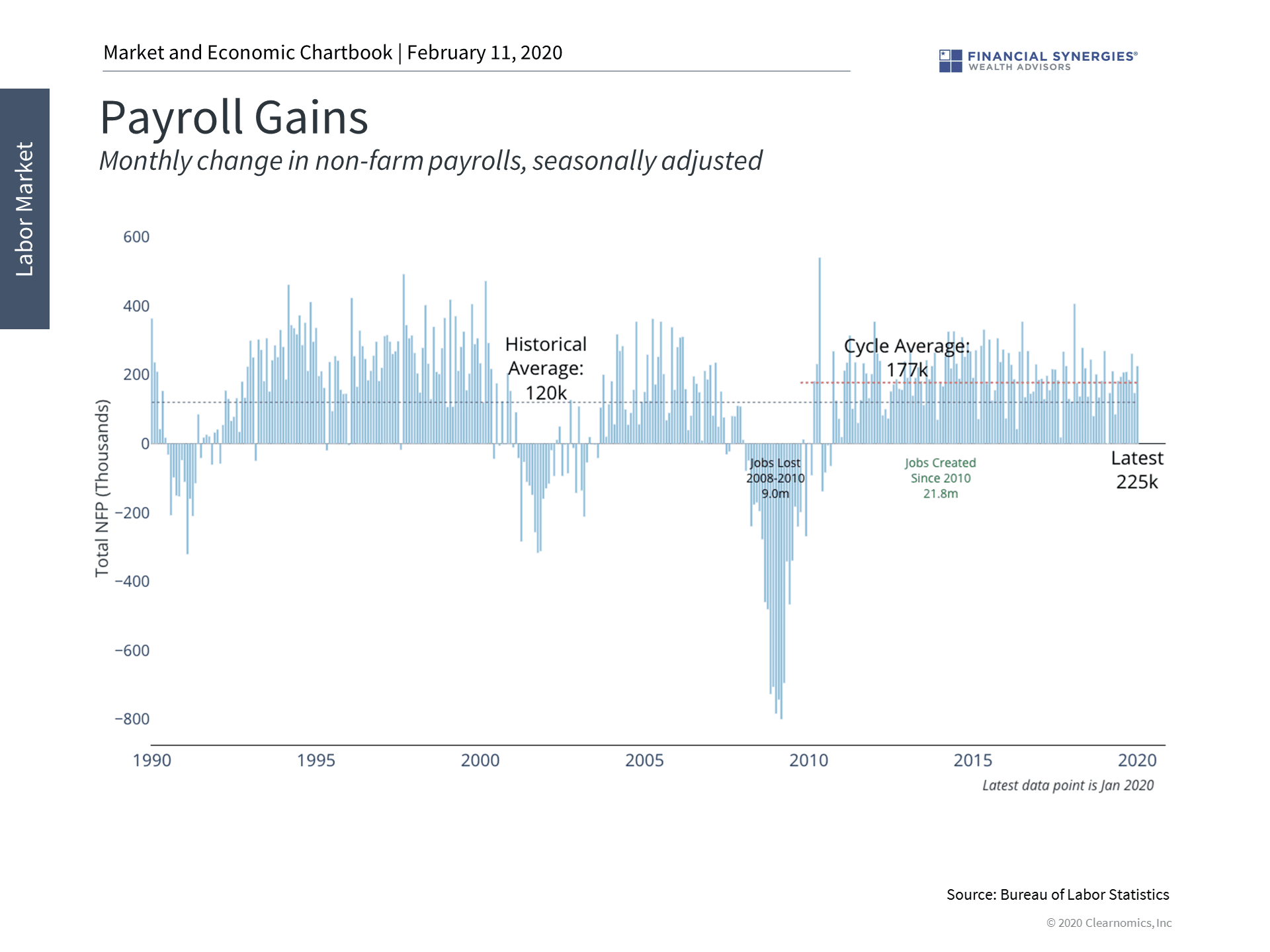 Last Friday’s jobs report showed that 225,000 non-farm payroll jobs were added in January, well above consensus expectations of only 165,000. About 22 million new jobs have been created over the course of this economic expansion, compared to the 9 million that were lost during the recession.

2. Unemployment continues to be extremely low 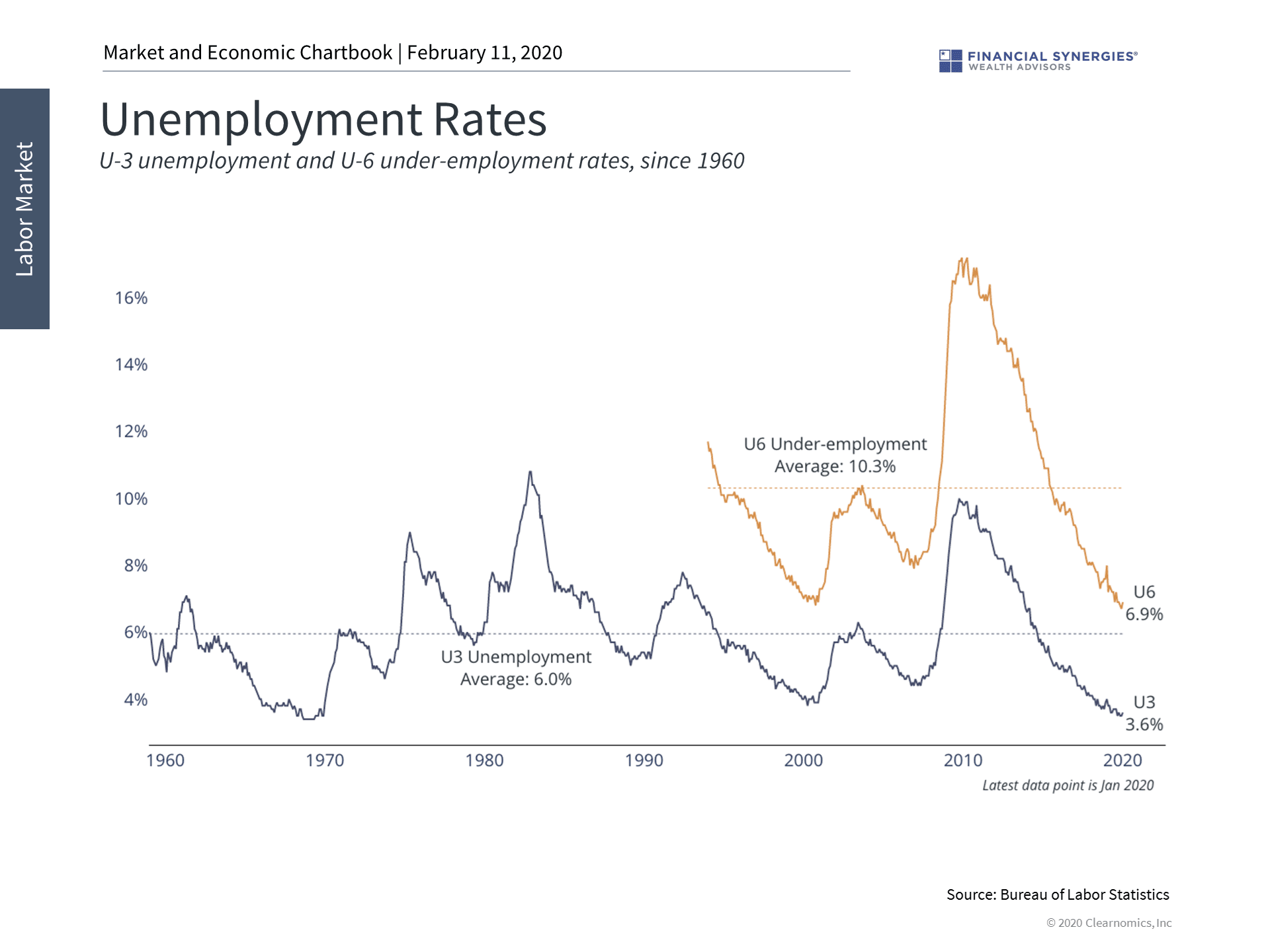 At 3.6%, the unemployment rate continues to hover around the lowest levels in five decades. The under-employment rate (U6 unemployment) is also quite low, having fallen significantly from its 2010 peak. This is an indication that even those who struggled to find jobs in the wake of the financial crisis are now doing so. 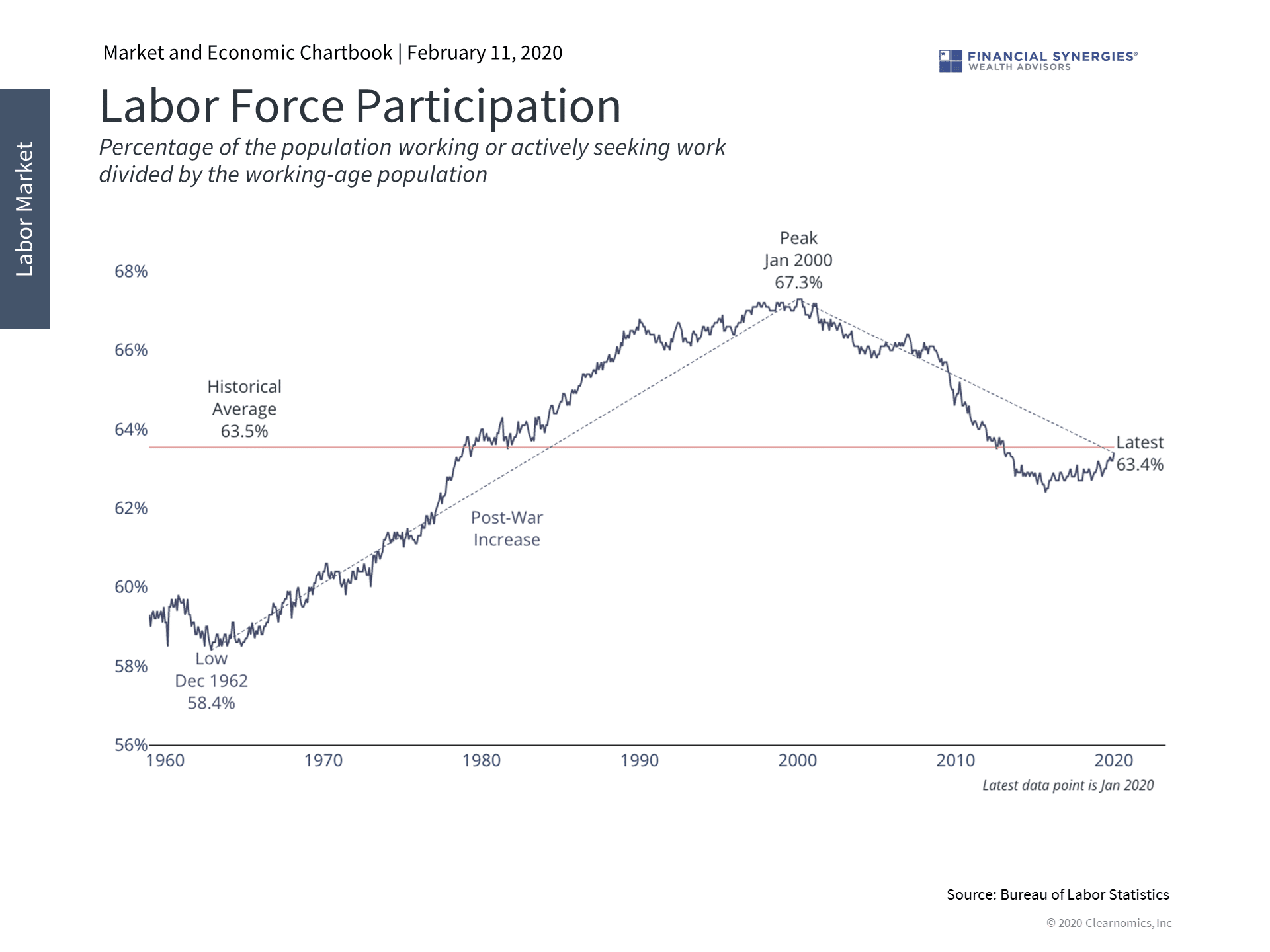 One reason the unemployment rate ticked up slightly last month is that more Americans are re-joining the labor force. This is measured by the labor force participation rate, shown above.

The labor force participation rate began to decline starting in the year 2000 due to the impacts of globalization and technology. Companies were able to do more with less via cheaper labor and automation. This trend then accelerated during the financial crisis but has now begun to reverse.

The bottom line? The underlying economy is still healthy despite global uncertainty.