Investors and economists have breathed a sigh of relief as new inflation data suggest that price pressures are easing. While the prices of everyday goods are still significantly higher than a year ago, some of the underlying trends are beginning to reverse.

And although inflation is sensitive to many hard-to-predict factors such as geopolitical risk, and cost increases have been worse than many originally expected, these are early signs that the stress on consumer pocketbooks could improve over the coming year.

The S&P 500 and the Nasdaq have now gained 16.7% and 22.6%, respectively, since the middle of June when oil prices peaked and the Fed began accelerating its rate hikes to fight inflation. What should long-term investors focus on to stay patient and benefit from a market recovery?

Inflation is beginning to ease 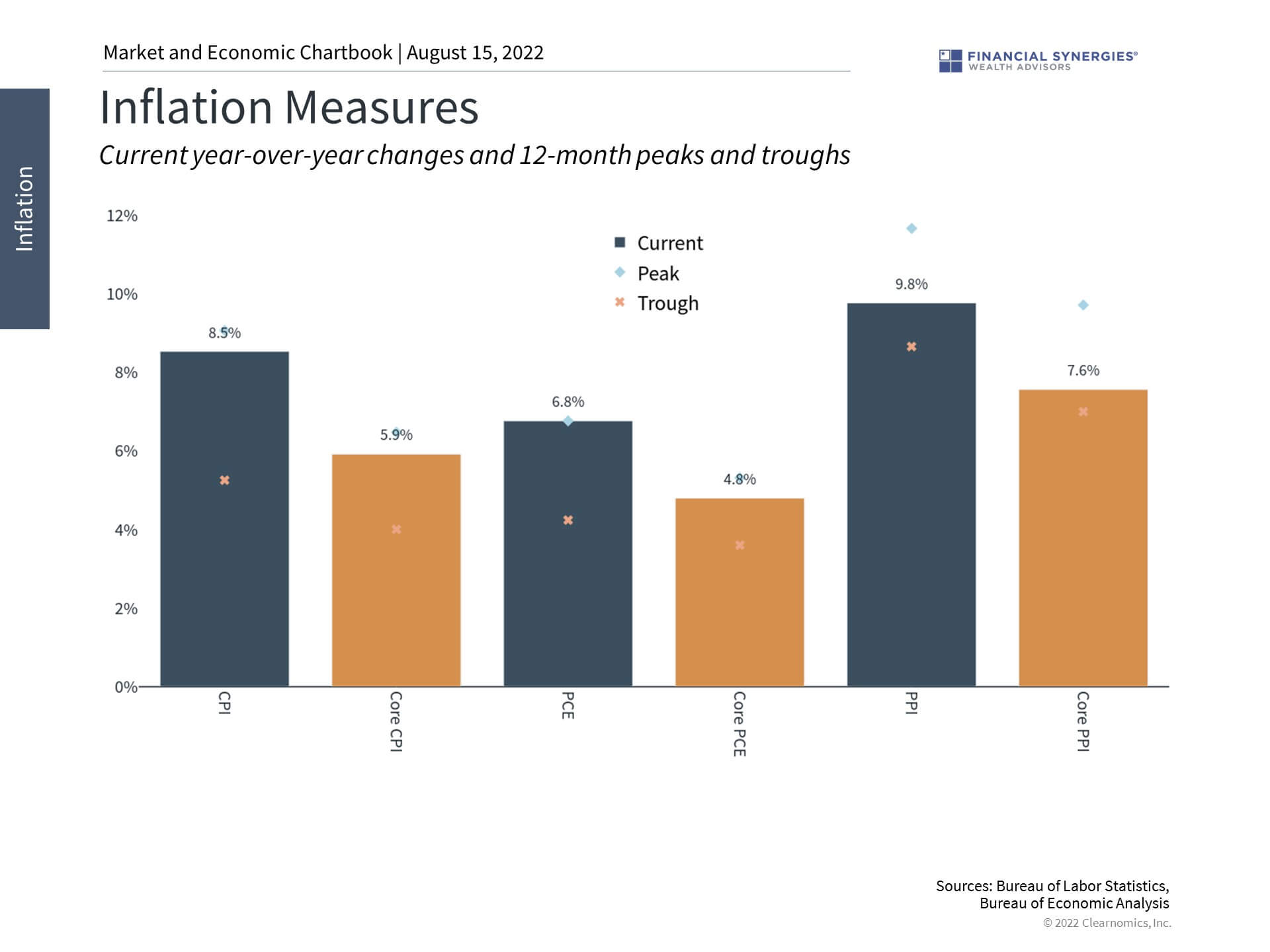 Over the past week, a few key reports on inflation were released by the Bureau of Labor Statistics. Perhaps the most important showed that the Consumer Price Index (CPI) was flat month-over-month in July, an improvement from June’s increase of 1.3%. The new reading resulted in a year-over-year headline inflation rate of 8.5%, which while high, is an improvement from its peak of 9.1%.

This was largely driven by declines in the cost of energy which have played an outsized role. This is consistent with the drops in oil, wholesale gasoline, and prices at the pump throughout the month of July.

The CPI release was followed by Producer Price Index data which measure the prices that producers receive for the goods and services they sell. These prices declined 0.5% in July thanks to many of the same factors that drove CPI. Finally, the Import Price Index, which is based on the prices of imported goods, reported a decline of 1.4% as well.

Energy prices have been a major driver of inflation over the past year and especially since March when the war in Ukraine escalated. Oil prices have declined since then and have hovered in the $90/barrel range for Brent crude, similar to their levels back in February. This has driven prices down across the energy supply chain, especially for gasoline prices which are now around $4 per gallon at the pump.

Due to the timing of these energy price movements, the inflation reports in July were the first to capture these trends. Oil prices are notoriously difficult to predict and $4 per gallon is still a challenge for many households, but these improvements are welcome nonetheless. 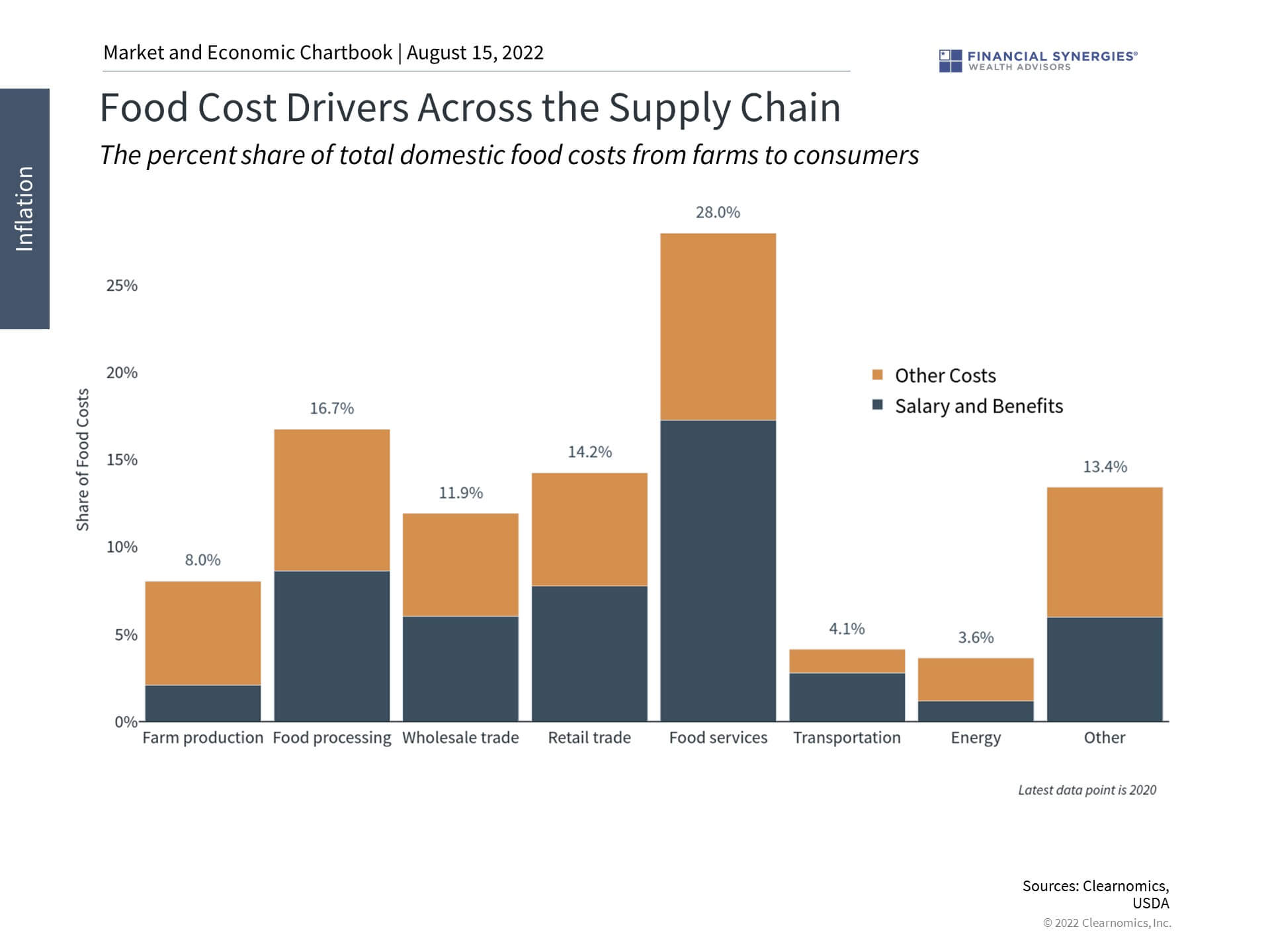 Despite the positive news around energy prices, food prices have continued to rise. The CPI food index showed that prices grew at a 1.1% month-over month rate in July, resulting in an increase of 10.9% over the past year. Unlike energy prices, swings in food prices are driven largely by labor costs and not on agricultural commodity prices alone.

The chart above highlights data from the U.S. Department of Agriculture from 2020 showing the breakdown of sectors that contribute to food production. Although agricultural commodity prices, including corn, wheat and barley, have declined since May, only 8% of food costs can be attributed to farm production.

Later steps in the supply chain including food processing, trade, and services make up the majority of food costs. Moreover, 51.6% of food costs can be attributed to employee salary and benefits costs which remain high as labor markets continue to tighten. Thus, it may be longer before food prices begin to drive improvements in the inflation data.

Still, the improvements due to energy are a positive sign that have led to improved consumer sentiment and inflation expectations. The University of Michigan’s Surveys of Consumers shows that inflation expectations over the next year ticked down from 5.1% to 5.0% and sentiment for the future improved significantly, from 47.3 to 54.9. Consumer sentiment is an important leading indicator for consumer spending and the overall state of the economy, and the latest levels represent a recovery from their recent lows. Despite these improvements, the inflation story is far from over and the level of prices will likely continue to drive markets, interest rates, and Fed decisions. How might the inflation story evolve from here? Three simple scenarios can help investors to understand the situation.

Second, a more conservative path might be one in which inflation rates are assumed to continue at the same pace as July, except for energy which remains flat. This would result in the year-over-year inflation rate gradually declining to just below 5% on a year-over-year basis by June 2023.

Third, an optimistic but possible scenario is one in which core and food inflation categories return to their 2019 averages while energy inflation is flat. This would result in the year-over-year inflation rate falling to 2.2% by June of 2023. While a lot can happen between now and then, as the past few years have shown, investors ought to remain focused on the long run as markets continue to recover.

There are positive signs that inflation could be easing. Markets have recovered significantly in just a short period as energy prices and other pressures have declined. Investors ought to stay patient in order to take advantage of market recoveries.

Medicare Part B Premiums Decrease for 2023

Midterm Elections 2022: What Does It Mean for Markets?