There are perhaps no two topics as controversial as deficits and taxes. Differences in political and social opinions on these issues are almost guaranteed to lead to heated discussions, even among otherwise calm individuals. Yes, taxes are always a concern, but don’t let the tax tail wag the dog.

With the pandemic still affecting individuals and businesses, and with new spending and tax proposals being released, it’s important to distinguish personal views from how taxes affect markets as we manage our portfolios.

Fiscal policy directly impacts many parts of our lives and is often driven by deeply-rooted political beliefs. While most individuals and businesses would prefer the lowest tax rates possible while maintaining their social agendas, this is difficult if not impossible to achieve. Not only are many spending programs difficult to scale back once enacted, emergency measures such as COVID-19 relief and military spending also worsen the national debt. It’s no surprise that the federal government has persistently run deficits – i.e., spending has outpaced tax collection – over the past century, across both political parties.

The latest Democratic proposals call for increases in the corporate tax rate to 26.5%, the capital gains rate from 20 to 25%, a 3% surtax for high-earners, and more. This is primarily to pay for a spending agenda of up to $3.5 trillion over the next decade and partly, it’s argued, to shift the tax burden within society. While these changes are far from certain, even within the Democratic party, they will likely be a focus of investor attention over the next several months.

Despite this, history shows that investors often worry too much about the effects of deficits and taxes on financial markets.

The reality is that the stock market and economy have both done extraordinarily well under a variety of tax regimes. This was true even when the highest marginal income tax rate was above 90% through the mid-1960’s and when the corporate tax rate was the highest in the world, at 35%, prior to the 2017 tax reform.

What matters more than specific tax rates is that the economy continues to grow in a way that benefits individuals and businesses. Fiscal policy, alongside monetary policy, can certainly be a tool to spur growth if done appropriately.

This is not to say that taxes can’t distort economic incentives or affect profitability. At a company or industry level, specific tax laws can make a big difference, especially when they are driven by broad objectives such as combating climate change. At an individual level, fiscal policy can change incentives to work and invest, at least in theory. There is evidence that stimulus checks created disincentives to work over the past 18 months.

The point is that for everyday investors who are planning for retirement and life goals, basing asset allocation decisions on changes to tax rates, or trying to time the market based on tax policy changes, would have backfired over the long history of financial markets. This is because both individuals and corporations find a way to maximize their incomes and profits over time by adjusting to new economic incentives and rules. For those investors who have long time horizons and hold broadly diversified portfolios, it’s been better to simply stay invested in a well-designed portfolio.

What tax policy can impact is the manner in which portfolios are built and maintained, including what tax-advantaged vehicles and instruments are attractive, whether to generate income from stocks or bonds, how to implement tax-loss harvesting, and more.

Thus, we view these new tax proposals with a level head. Below are three charts that help provide perspective on spending, taxes and markets. 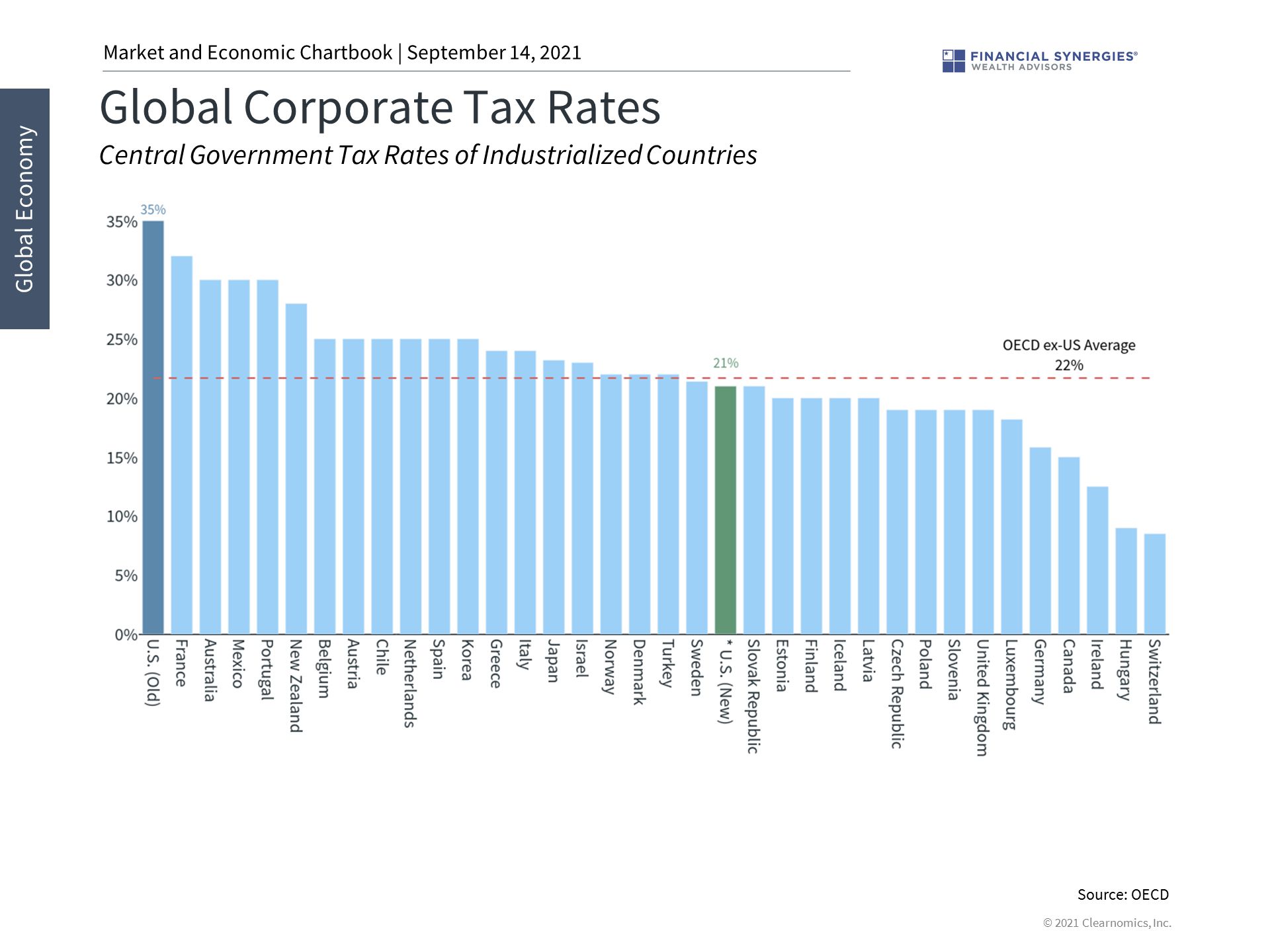 U.S. corporate tax rates were the highest in the world prior to the 2017 tax reform. Today, at 21%, they are in the middle of the pack. The current proposal to increase this rate to 26.5% would almost split the difference between the old and new rates.

2. The deficit and debt have ballooned 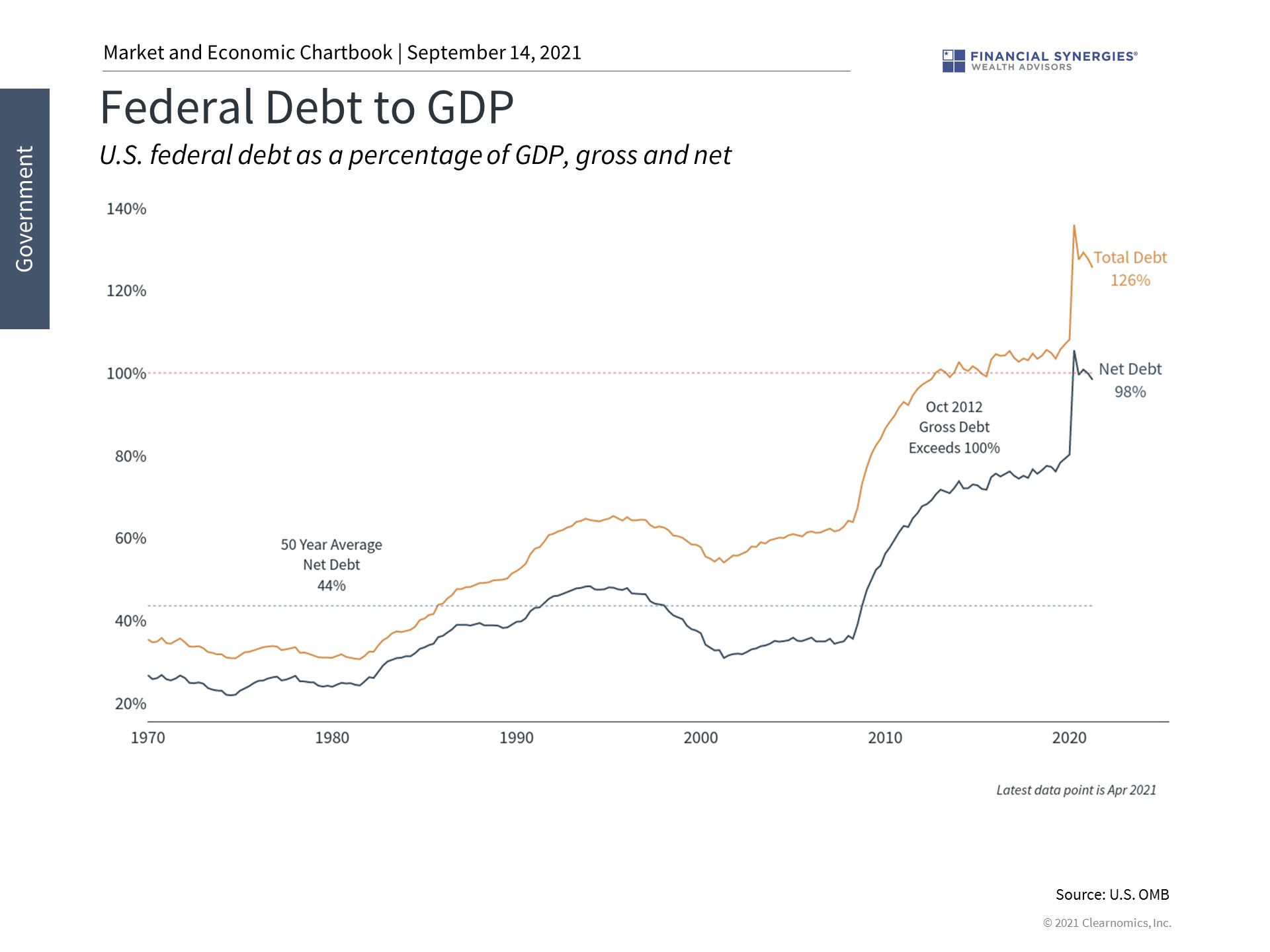 The federal deficit and debt have both ballooned due to COVID-19 stimulus measures. However, these were one-time spending measures designed to prevent even worse outcomes for the economy. Current spending proposals of up to $3.5 trillion would need sources of funding via higher tax rates or a different tax structure. 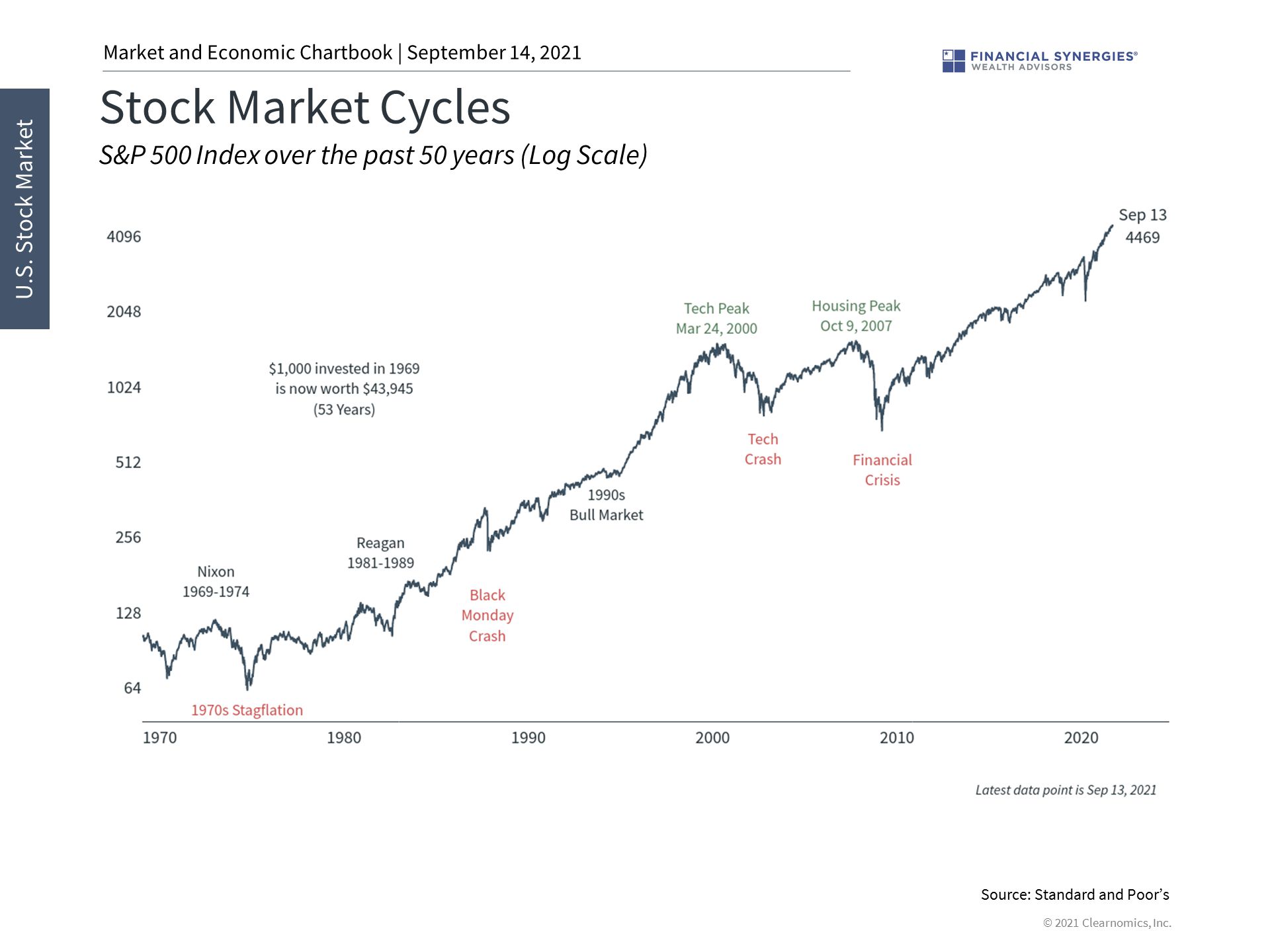 Despite concerns over taxes, history shows that financial markets can perform well under a variety of tax regimes. This was true both before and after the Reagan tax reforms. What matters is that the economy continues to grow in a way that benefits individuals and businesses.

We’re watching this closely as the tax discussion evolves. Our portfolios are extremely tax-efficient due to the utilization of exchange-traded funds (ETFs), tax-advantaged mutual funds, and where appropriate, municipal bonds. We also implement tax-loss harvesting strategies when the opportunities arise.

We will continue to monitor the proposed tax changes and make adjustments as necessary, with the end goal of making our portfolios as tax efficient as possible.