Benjamin Graham, often considered to be the father of value investing, drew a stark distinction between speculating and investing. He considered speculation to be the buying/selling of securities that is based on price movement alone. Investing, on the other hand, is based on the analysis of factors such as company performance, sector trends, macroeconomic data, etc. He even went a step further by arguing that “an investment operation is one which, on thorough analysis, promises safety of principal and a satisfactory return.” In other words, true investing is the practice of constructing portfolios in order to achieve long-term financial goals.

Of course, the line can often be fuzzy. The dot-com bubble of the late 1990s and early 2000s was, in hindsight, clearly driven by investors expecting stock prices to rise indefinitely. However, there was also the belief that the internet and technology would be transformative, thereby justifying such lofty valuations. The irony is that this view was eventually proven to be correct, just not in the way that many intended. And even if a financial asset is speculative in nature, it may still play a role in a well-diversified portfolio.

There are countless other examples of speculative assets that gain momentum among investors. Typically, these involve small or micro-cap stocks, precious metals, art, rare wine, tulip bulbs and more. The same phenomenon may be occurring today in the world of cryptocurrencies such as Bitcoin, Ethereum and others. Since the bottom last March, the price of Bitcoin has risen over 500%. Naturally, this has captured the attention and imagination of many everyday investors and technologists alike.

The topic of cryptocurrencies can be complex and is well beyond of the scope of whether it can serve a role in portfolios. A proper explanation would involve the blockchain, hashing/mining algorithms, energy consumption, financial theories of currencies and asset classes, and more.

In short, a cryptocurrency, of which Bitcoin is the most famous, can be thought of as a “digital asset” that is de-centralized in nature. It is digital in that a bitcoin exists only within computers. It is de-centralized in that no person, corporation, or government controls the network. As technology advances and government mistrust rises, some find these characteristics to be desirable. For this reason, many cryptocurrency supporters are dogmatic about its benefits to the world and society.

From a long-term investor’s standpoint – whether or not this turns out to be true, and whether or not one believes the arguments for or against – Bitcoin is simply another asset with certain characteristics. The question of whether and how much to invest in this asset should be no different than deciding on any individual stock, bond, currency, commodity, investment theme or idea.

It is from this perspective that there are a number of challenges. First, cryptocurrencies are still not a reliable store of value, medium of exchange, or means of account. In other words, they do not yet fit the practical requirements of currencies such as the dollar. While this may certainly change in the future, today it is still rather difficult for everyday individuals to purchase and store digital currencies. And even when that day comes, it’s hard to know which cryptocurrency will prevail – just as it was difficult to know in 1995 which dot-com stocks would survive and change the world.

Second, cryptocurrencies have not yet proven to be reliable portfolio diversifiers. In fact, they have often been positively correlated with the stock market and other risk assets. From its peak last February to the bottom in March, the price of Bitcoin declined 53%. Since then, it has gained alongside the S&P 500 – although to a much larger scale due to its significantly greater volatility. For those seeking safety when stocks are down, especially from an asset with no central control, unfortunately this hasn’t yet been proven to work.

Third, Bitcoin and other digital currencies are extremely volatile (almost legendary volatility). Depending on the period, they can be 5 to 10 times as volatile as the overall stock market, which itself is considered to be risky. This is one reason they are still poor stores of value and thus dissimilar from Treasuries and some commodities – and also how they may be more similar to traditional speculative assets. Its previous run-up in late 2017 and early 2018 saw Bitcoin rise by over 20x before plummeting nearly 80%. Thus, it’s important to focus on both rising and falling periods.

What does this all mean for us? Just like speculative tech stocks during the dot-com boom, none of this is to say that cryptocurrencies may not be important in the future. I tend to believe they will be. It’s also not to dismiss that some investors have captured eye-popping returns in the latest run-up.

However, this is where speculation needs to be strongly distinguished from investing. The purpose of long-term investing is to construct sound portfolios that can help investors to achieve financial goals. It’s possible that cryptocurrencies can play some role in these portfolios, especially as Bitcoin and other assets develop and become more institutionalized over time.

Ultimately, the choice to invest in cryptocurrencies – or any individual asset for that matter – should be viewed in the context of a diversified portfolio and long-term financial goals. Below are three charts that provide perspective on the role of cryptocurrencies in portfolios.

1. Cryptocurrencies such as Bitcoin have risen significantly this year 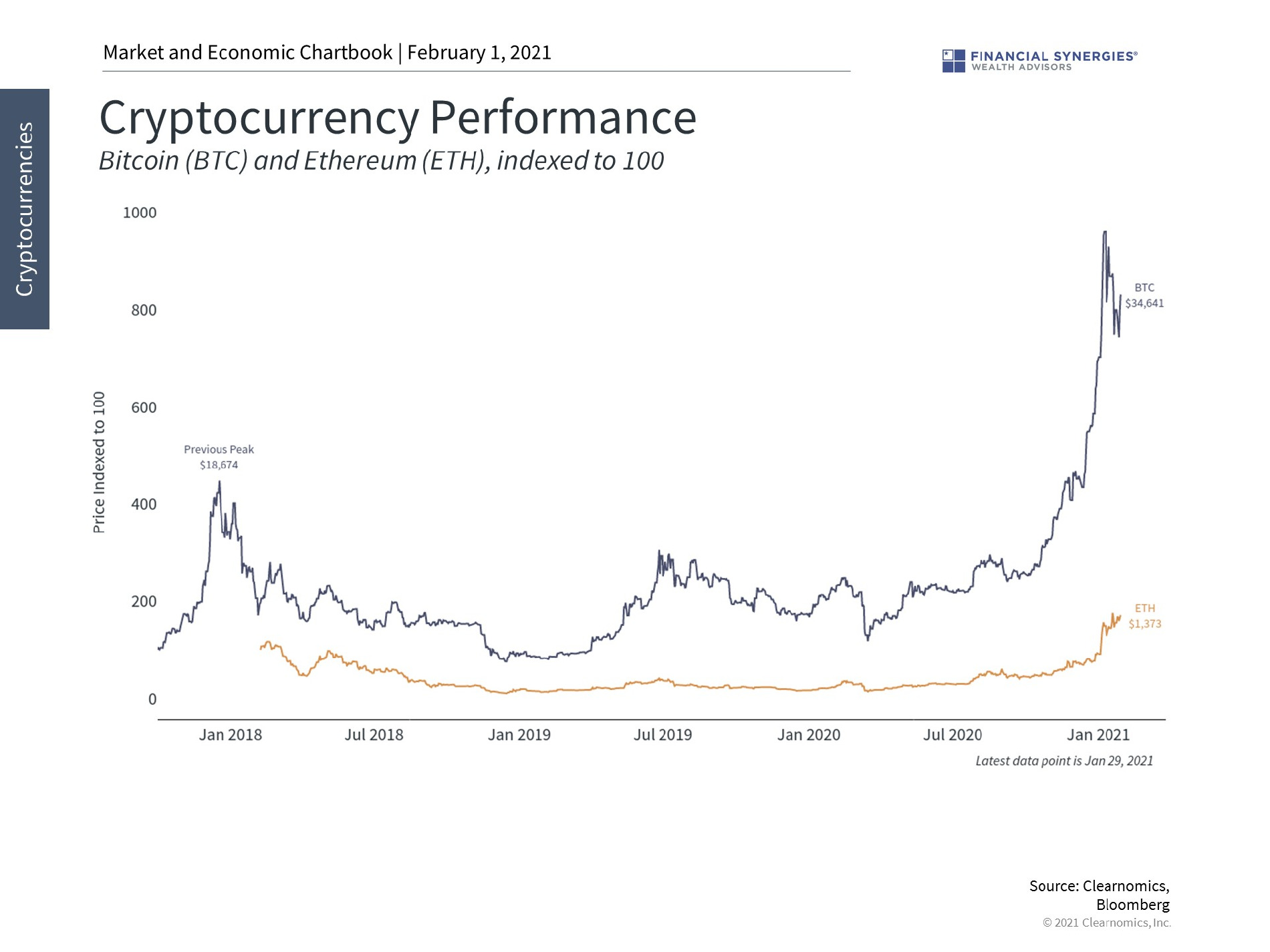 The prices of Bitcoin, Ethereum, and other cryptocurrencies have risen dramatically in the past several months. However, Bitcoin has experienced other run-ups including in late 2017 when it breached $10,000 for the first time on its way to $18,000, before plummeting. These digital assets are extremely volatile and should be handled with care in portfolios.

2. Bitcoin has often been correlated with the stock market 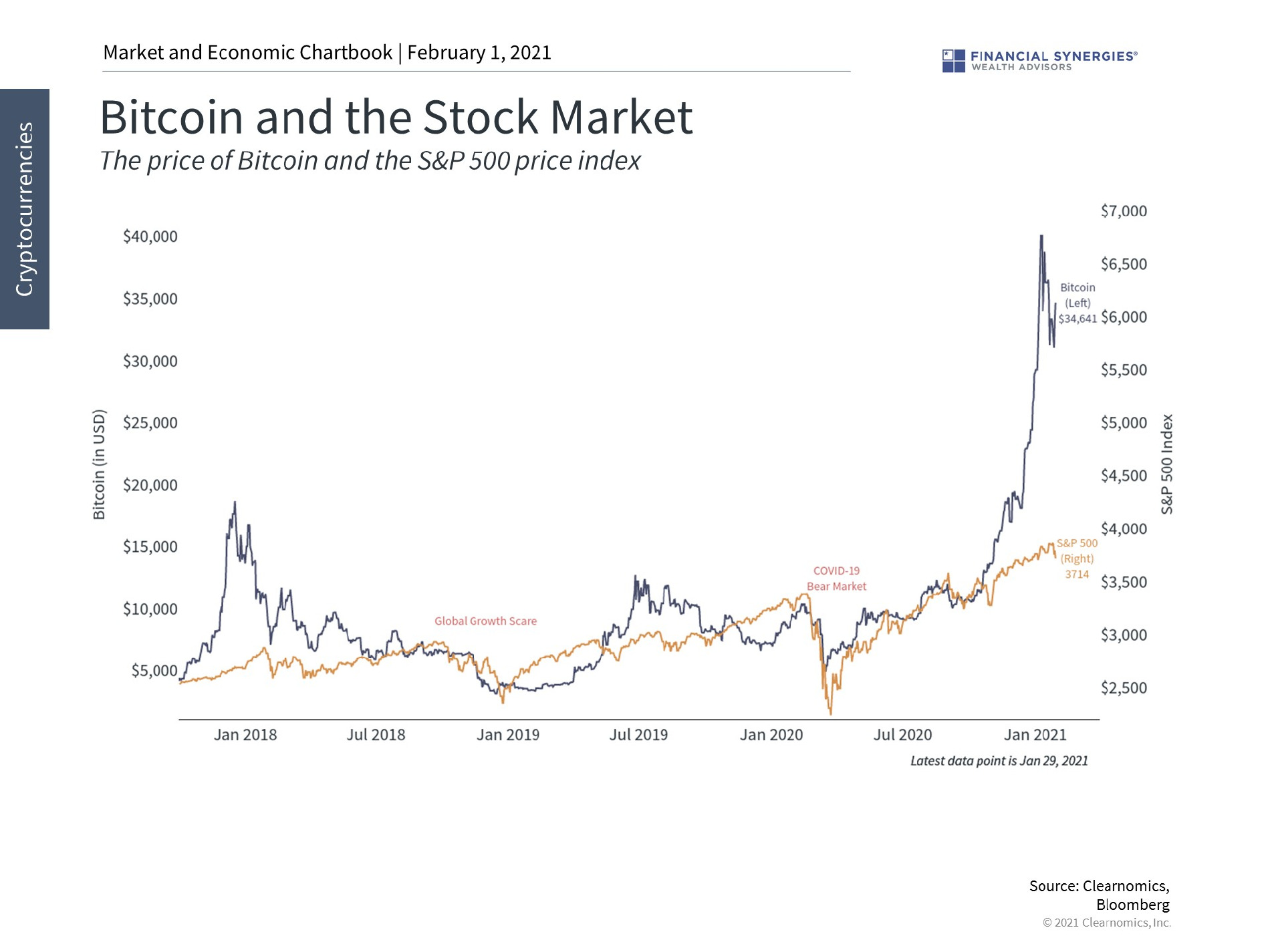 Bitcoin has not yet proven itself to be a portfolio diversifier. Instead, it can magnify risk since it is positively correlated to assets such as stocks. This can be seen most clearly in 2020 when it declined alongside the stock market before recovering at the same time.

3. The dollar’s decline has likely boosted Bitcoin as well 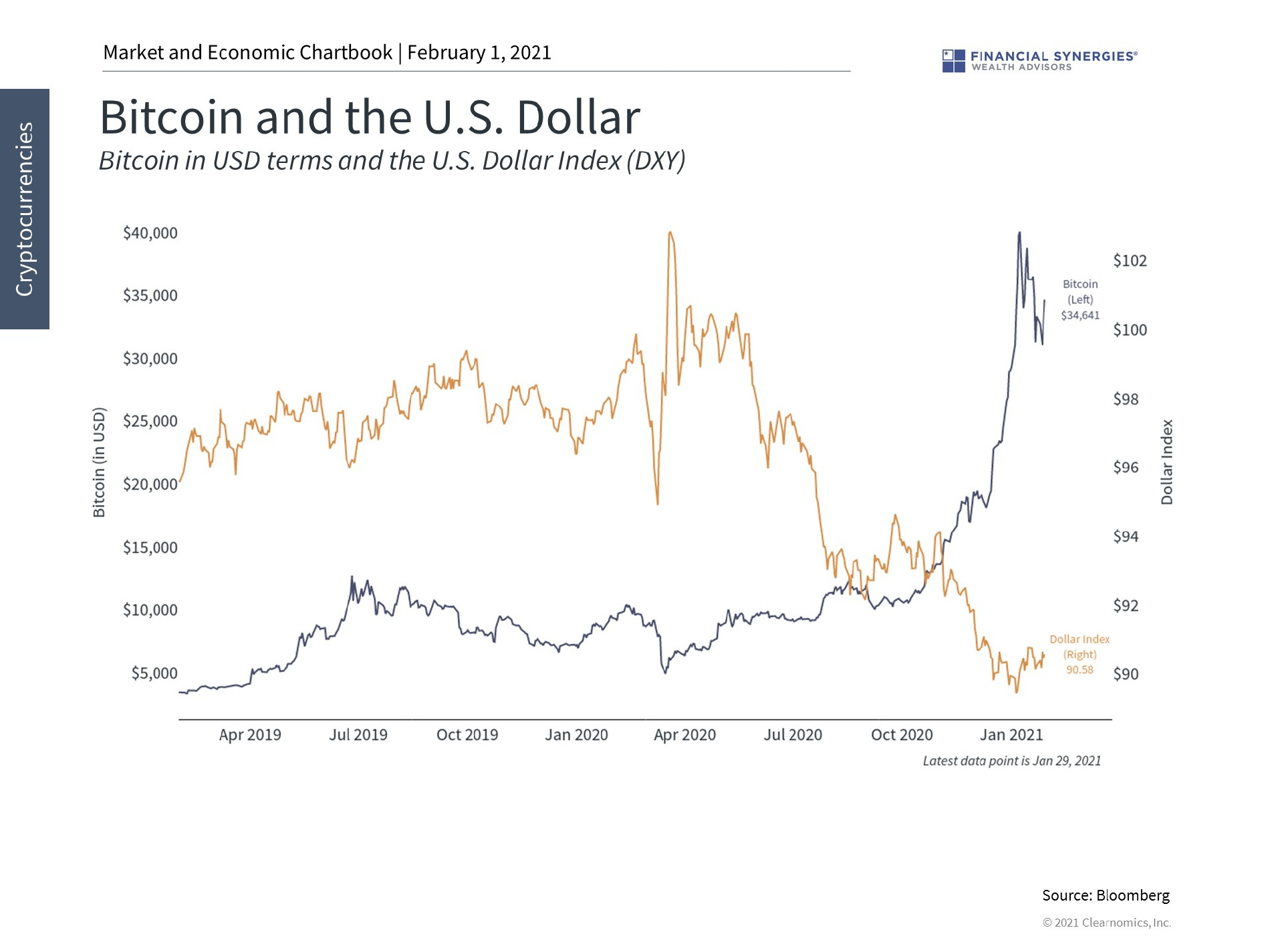 Since the price of Bitcoin is often denominated in U.S. dollars, the falling dollar has likely helped to propel Bitcoin higher as well. In this way it is no different from other major currencies which have risen over the past several months as the dollar has devalued.

From a technical perspective, cryptocurrencies are extremely complex and interesting. From a portfolio perspective, however, investors ought to consider whether these assets can contribute to achieving their long-term goals.