The past few weeks have seen one blockbuster economic report after another. From the 916,000 jobs that were added in March to retail sales jumping 9.8% month-over-month, these are some of the best economic numbers we could see in a lifetime. At the same time, much of this was anticipated due to the nature of last year’s shock and the natural recovery from the shutdown. As the stock market continues to reach new highs seemingly every week, how should investors interpret these economic numbers and stay focused on the long run?

It’s important to distinguish between a mechanical recovery from last year’s lockdowns, the effects of stimulus, and a sustainable acceleration in growth.

Even if the economy were to simply return to pre-pandemic levels, economists would expect high growth numbers for a period as the world reopens. The fact that this has occurred swiftly is a nice surprise but hardly unusual. At the moment, consensus economic projections are for U.S. GDP to recover to pre-pandemic levels by the end of 2021.

Similarly, government stimulus to the tune of trillions of dollars would reasonably be expected to boost overall spending by individuals and businesses for a time. The latest jump in retail spending can be partially attributed to the timing of stimulus checks. However, without a further change in consumer and business attitudes, stimulus alone is not enough to sustain a long-term recovery.

These factors are important and their contribution to the early stages of the recovery cannot be overstated. However, the more important question today is whether there will be a change in individual and corporate expectations that causes growth to accelerate – beyond the initial bounce-back and one-off stimulus bills. As markets rise ever higher, this appears to be what some investors expect.

This would have to go beyond pent-up demand – i.e. the purchasing of goods that were delayed last year – and could be a reaction to factors such as being stuck indoors for months. For instance, a household might choose to buy a nicer car than planned, or splurge more on an international vacation. Businesses might anticipate this behavior and seek to invest in future growth today, further boosting capital expenditures, hiring and wages. Whether we call this “animal spirits,” a multiplier effect or any other term, this is what would allow the recovery to transform into sustained growth.

So far, it is unclear if and when this will take shape. However, the stock market appears to be pricing in this possibility. The market is not always correct, but when it is, it appears to be prescient in hindsight. This has been the case over the past year when the market began to rebound last April even as most parts of the country were locked down for several more months.

This is also the key to rising inflation expectations which the Fed has attempted to achieve for over a decade. Even with prices rebounding from last year’s lows, headline CPI rose 2.6% over the past year. This is an acceleration from recent history, and is notionally above a 2% Fed target, but is quite tame compared to periods of runaway inflation decades ago.

Thus, the market is no longer just expecting a simple recovery but a continued acceleration in growth due to the economic reopening, government stimulus and excitement among consumers and businesses. Thus, while investors should continue to cheer positive economic news, they should also remain balanced and disciplined as the stock market continues to reach new highs.

1. Many measures of economic activity are at multi-decade highs 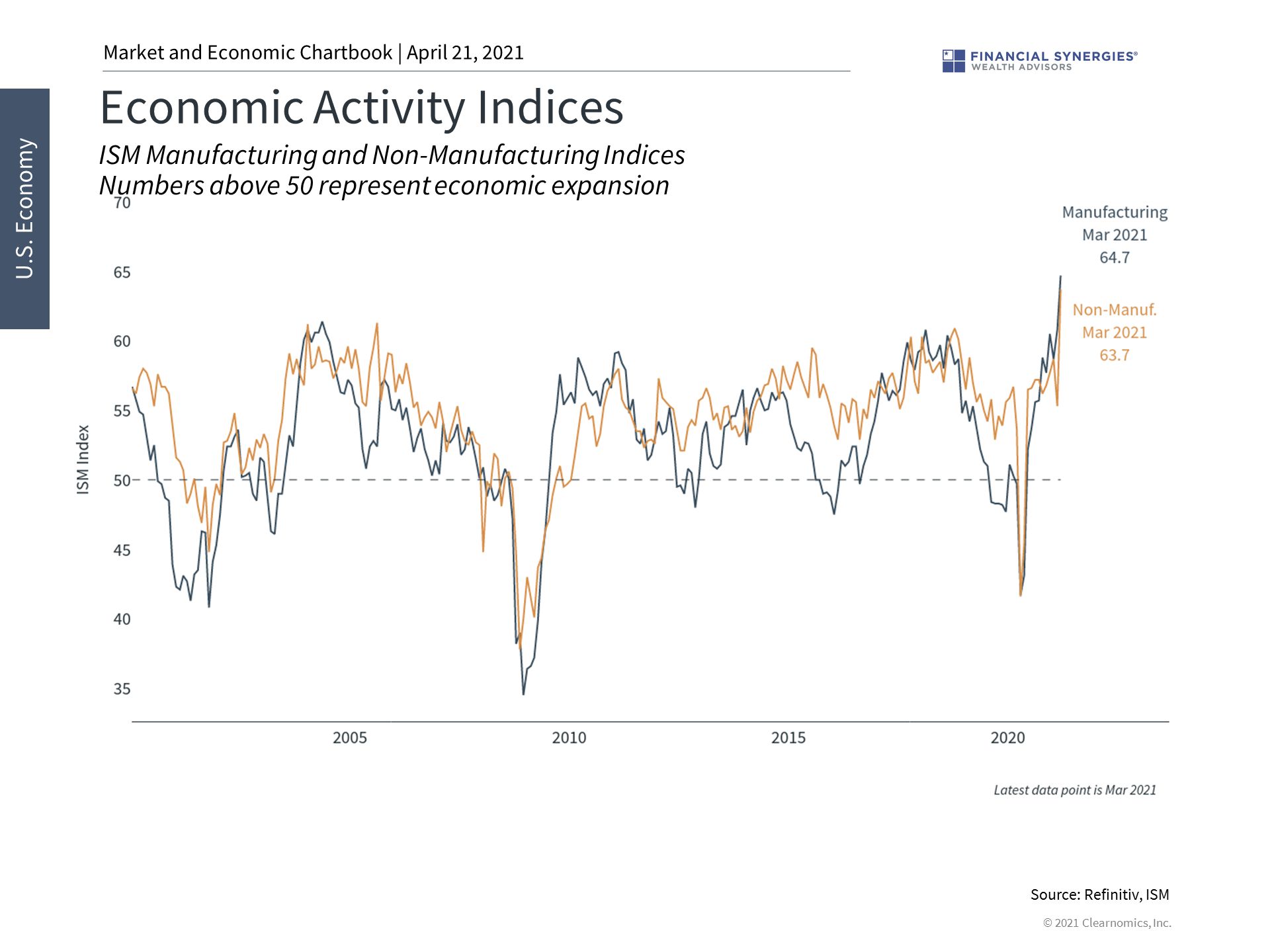 The ISM manufacturing index has reached its highest level since the early 1980s. Other measures, including the non-manufacturing index, are near historic highs as well. Across the board, there is clear evidence that economic activity is strong.

2. Consumer spending is at historic levels 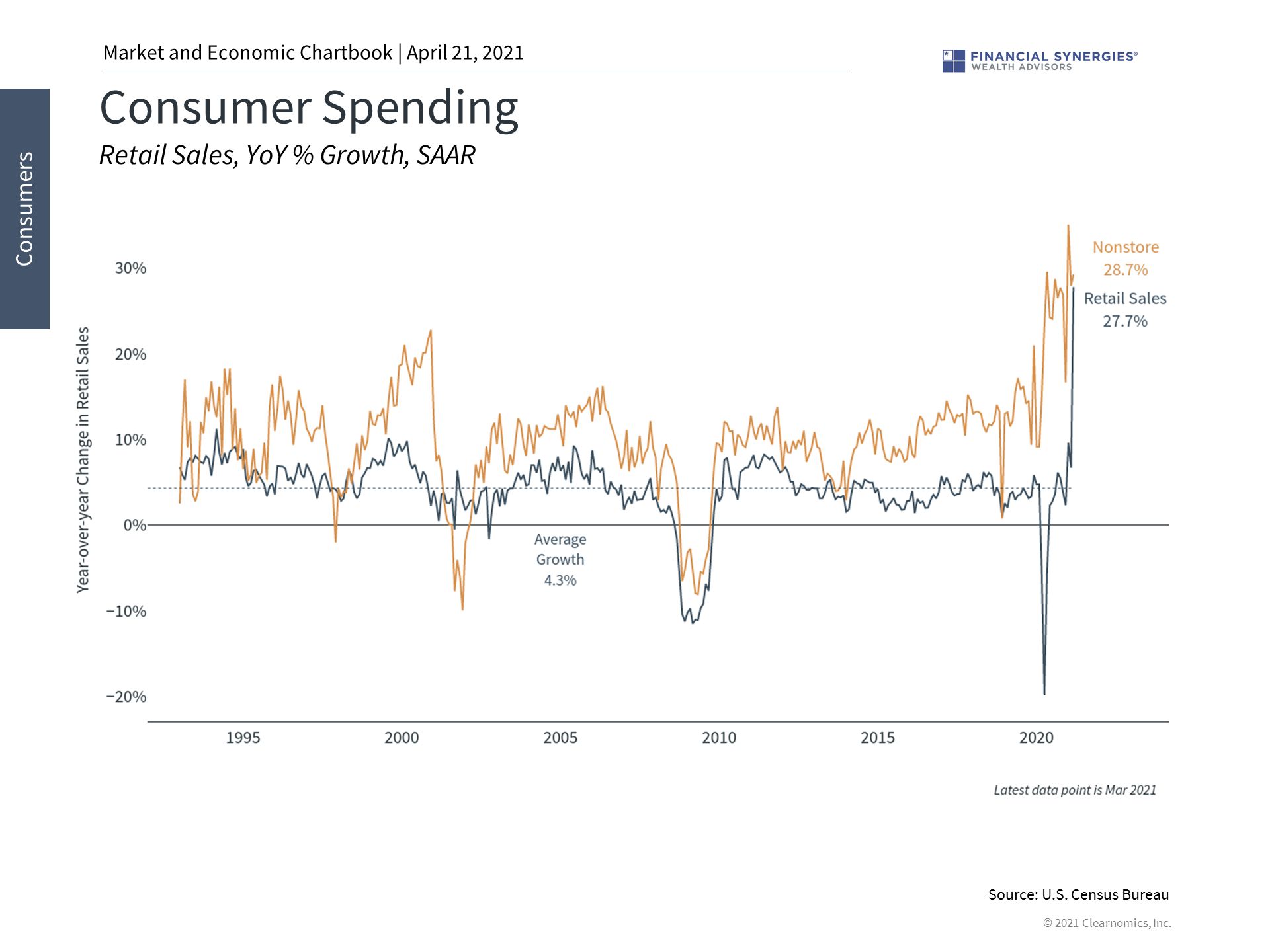 Recent retail sales numbers show that consumer spending rose at the highest pace in history. It jumped 9.8% in March compared to February which constitutes a 27.7% increase from the year before. While there are some “base effects” when comparing to last year, the timing of stimulus checks and the continued reopening of the economy have contributed to these strong numbers.

3. Inflation has risen but is still tame 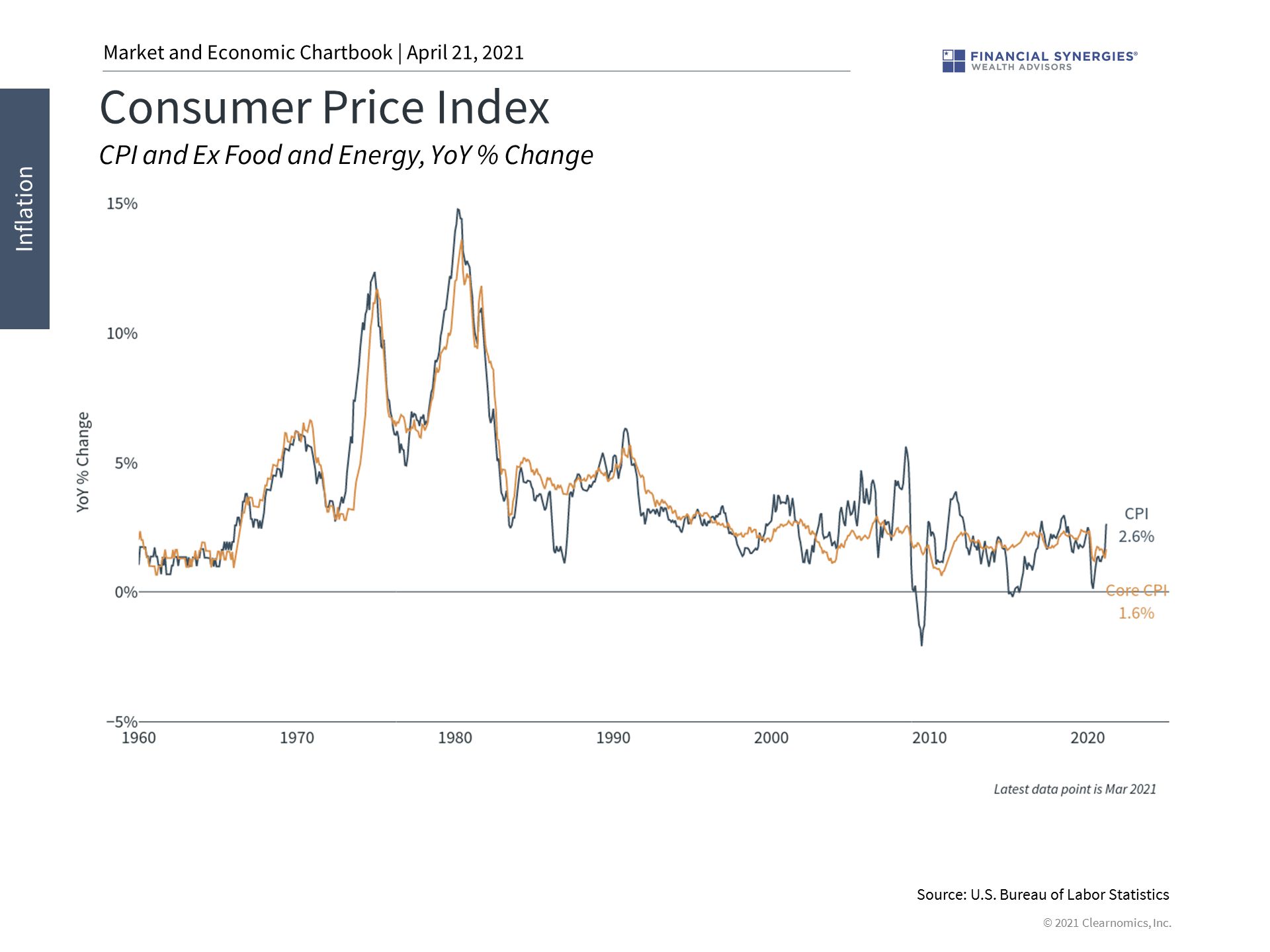 Despite these historic economic gains, last week’s data show that inflation is still relatively muted. Headline CPI rose 2.6% over the past year – higher than in recent memory but is still tame compared to historic peaks. While the rate of inflation could continue to rise over the next year or two, there is no evidence yet that this will translate into runaway inflation.

The economic recovery is strong and this has pushed the stock market valuation levels up too. Investors should stay invested and remain disciplined as the cycle evolves.