Be Greedy When Others Are Fearful

It got pretty ugly on Wall Street today, with the Dow Jones dropping 617 points (-2.38%). The U.S. and China exchanged fresh threats in a trade war that many fear will continue to escalate. Only time will tell, but it’s likely a deal will be reached eventually.

On the surface, the stock market has been eerily calm this year until recently, rising in almost a straight line from last Christmas through last week. I wrote about this in one of my February Blog Posts. The shift in investor sentiment over that period has been dramatic, swinging from fears of an impending bear market to a sense of complacency. What should investors expect going forward and how should they react to it?

This question reminds me of one of my favorite investing quotes from Warren Buffett:

Times of great fear and volatility can also bring great opportunity to those who stay calm and rational. Just understand that downturns are inevitable and managing volatility is a normal part of investing.

While we can be grateful for swift market rallies like the one we’ve seen this year, we should not expect these to last forever, and certainly not without a few bumps in the road. Staying invested for the long run requires seeing beyond recent market patterns and concerns.

While markets have experienced greater volatility over the past week, this should also be viewed with perspective. First, the VIX index, a popular gauge of market “fear,” was at unsustainably low levels for much of this year. And while it has increased, it is still only around the historical average. The largest stock market pullback this year is still only a few percentage points in magnitude.

Second, many of the issues driving market concern are ones that are already familiar to investors. The stalled U.S.-China trade talks, for instance, have weighed on markets for well over a year. Rising tariffs and the threat of a protracted trade war are, unfortunately, not likely to be resolved any time soon. But at the same time, this also doesn’t justify significant long-term concern or dramatic portfolio shifts for patient investors.

Third, it’s important to remember that we’re later in the business cycle and that volatility should increase over time. We should not be surprised by daily, weekly, or even monthly swings that are much larger than what we’ve grown accustomed to over the past several years. The historical average decline that the S&P 500 experiences each year is about -13%. Over the past seven years, only one year has seen this level of pullback or worse: last year. Even that period of volatility was short-lived.

For investors seeking to protect and grow wealth over many years and decades, it’s clear that market timing is often counterproductive. The goal isn’t to swerve around every pothole. Not only is this dangerous, but some bumps are entirely unforeseen or unavoidable. The goal is to set yourself up for a balanced ride, regardless of the terrain.

Staying invested in volatile markets is a key principle of investment success. For some investors, however, this may be especially challenging given the market calm we’ve benefited from this year. Such a low level of volatility is highly unusual since almost every year experiences a market pullback of at least 5%.

The largest decline this year, as of last Friday, has only been -2.5%. This is extremely low by historical standards. It would not be unreasonable for investors to expect greater levels of volatility going forward.

Markets tend to recover if the fundamentals are sound 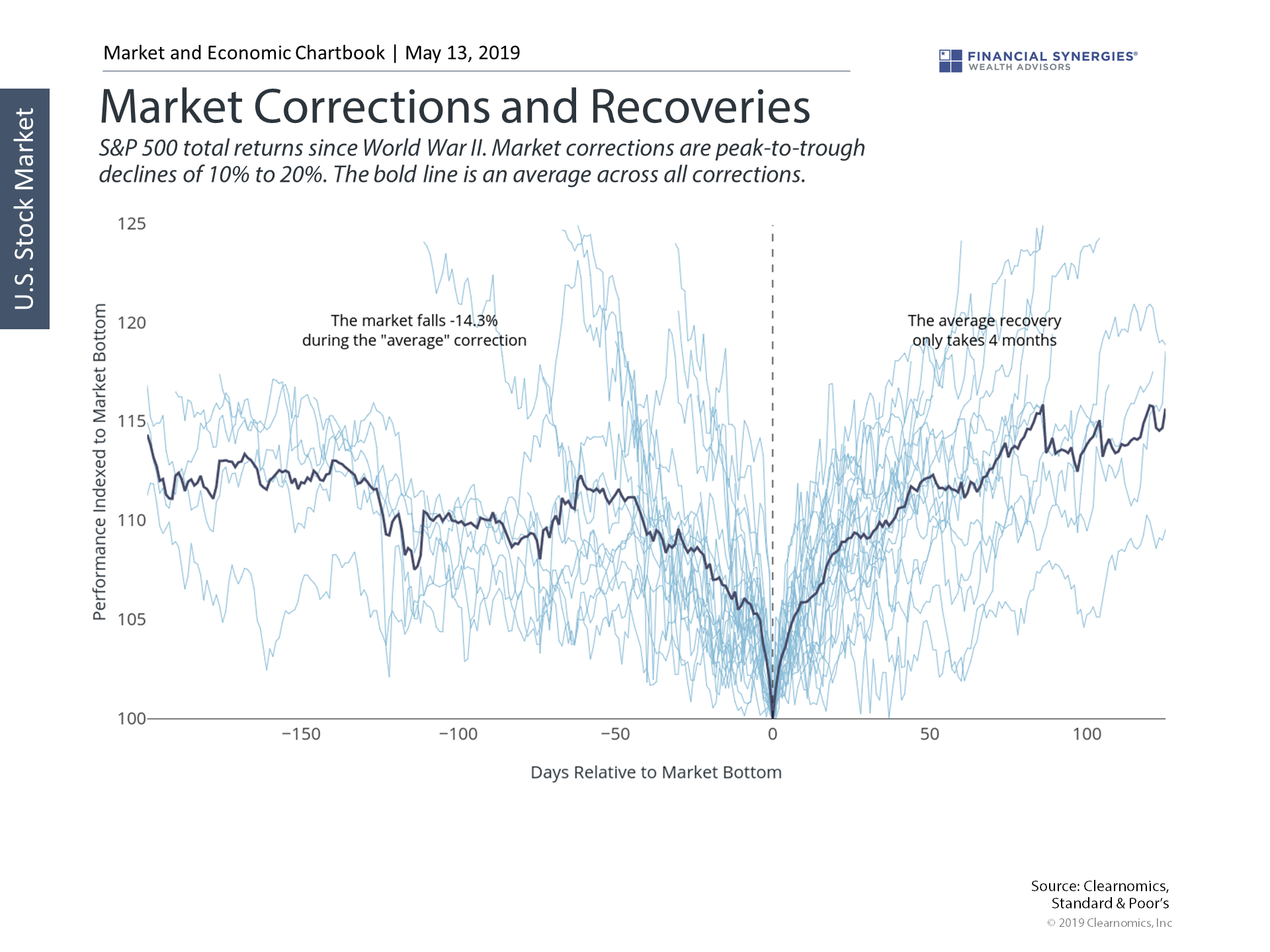 In hindsight, last year’s market rebound was similar to historical periods of market volatility. The fact that the recovery took about four months is exactly in line with the historical average.

While the exact timing may be a coincidence, the broader story is that market corrections and recoveries are normal. Investors should not be surprised by market pullbacks – they can occur at any time and without warning – nor should they be surprised when markets recover.

Market timing is tempting but is often counter-productive 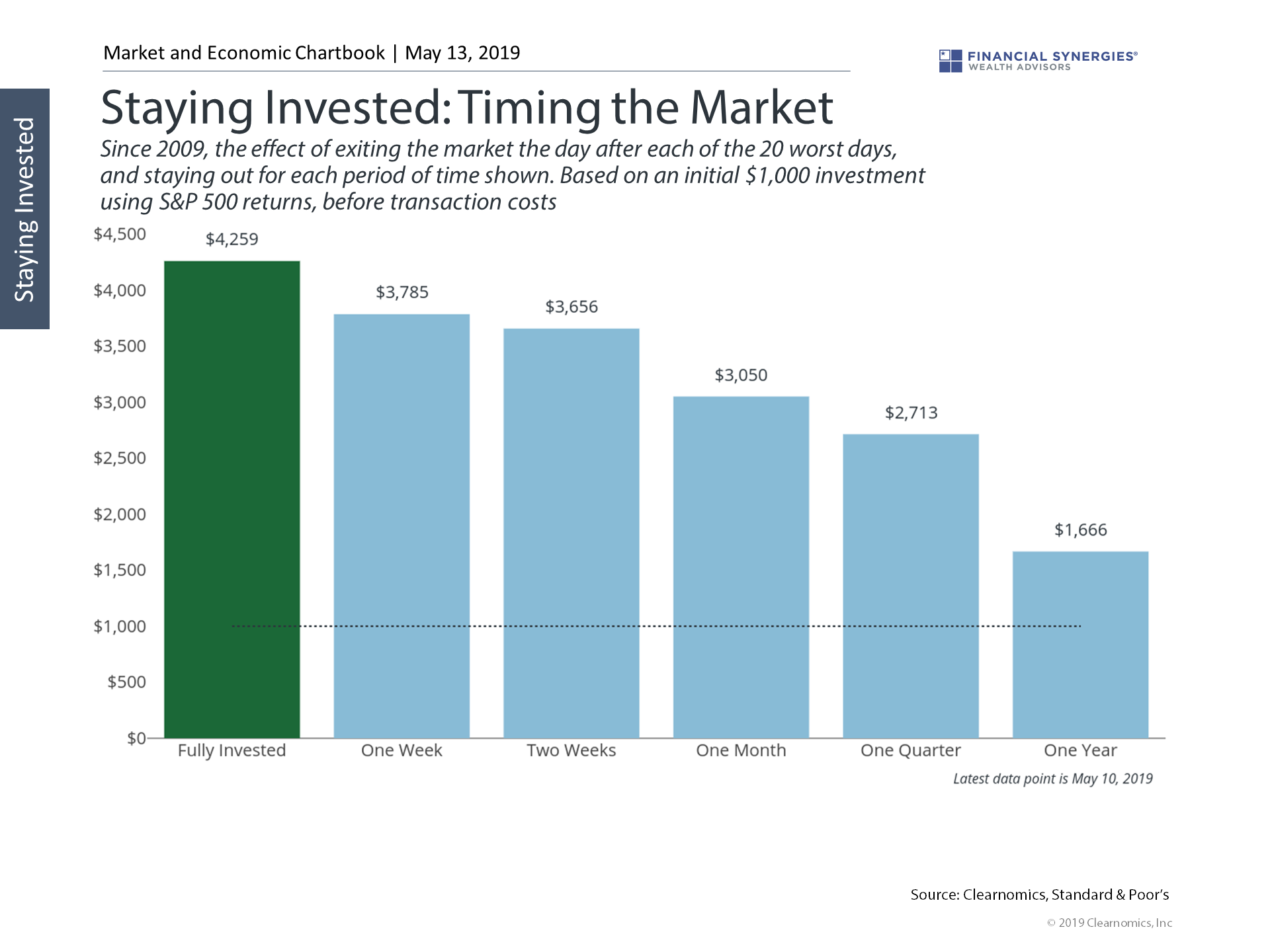 In response to volatility, it’s natural to be tempted to jump in and out of the markets. The problem with attempting to time the market is that it’s often reactive. Not only do you need to find an exit point after markets have already fallen, but must also decide when to re-enter later.

The chart above shows the hypothetical result of exiting the market the day after large declines and staying out of the market for various periods of time. Since markets trend upward, the longer one stays on the sidelines, the more likely they are to miss investment gains. Those who are hesitant to re-enter after experiencing the safety of holding cash are likely to miss out even more.

Additionally, these numbers are before transaction costs and other fees. Thus, the outperformance of staying invested is most likely even greater.