Worsening Inflation and a Bear Market

The last two years have been the perfect storm for inflation. Not only have these trends not let up, they have accelerated. Rising prices affect all aspects of the economy, from the Fed’s macroeconomic policies to the microeconomic decisions of households and businesses. Concerns over the impact of inflation on interest rates, consumer spending and corporate profits have pushed the broad market back into bear market territory.

Last week’s data show that the Consumer Price Index, a common measure of inflation, accelerated again in May after briefly slowing in April. Compared to the previous year, consumer prices rose a whopping 8.6%, the fastest growth rate since December 1981. Even “core” CPI, which measures the underlying inflationary trend, climbed 6%.

It’s helpful to review how we got here. Beginning in 2021, global supply chain problems worsened due to strong consumer and business demand as the economy recovered. The war in Ukraine and other factors then led to steep increases in energy and food prices, directly hurting consumer pocketbooks. The competitive labor market has meant shortages of workers and higher wages, eating into the profit margins of businesses. For these reasons, inflation remains the central issue for investors, and there are two broad areas of concern that have weighed on markets.

First, investors are worried that the Fed will be forced to “induce” a recession in order to control inflation. This is exactly what the central bank did under Paul Volcker in response to the stagflation of the late 1970s and early 1980s. By tightening monetary policy, the Fed was able to control runaway inflation at the expense of economic growth. Fortunately, it worked, setting the stage for phenomenal growth over the 1980s and 1990s.

While the parallel to the Volcker era is instructive, there are important differences today. Inflation was much worse throughout the 1970s with multiple periods of double-digit price gains over the decade. Not only have all economists and central bankers studied that period extensively but the Fed is already beginning to tighten more quickly, albeit with an unfortunate delay. In contrast, the Volcker Fed didn’t begin to aggressively tighten until 1979 after annualized inflation had already averaged 8.2% for nearly 7 years.

Also, unlike the 1970s, underlying demand in the economy is still fundamentally strong and unemployment is near historic lows. Ironically, this is one reason inflation is a problem in the first place. Thus, if supply were to catch up, prices could theoretically begin to normalize, easing some of the economic stress. So, while a technical recession is always possible as the Fed tightens, we are not beginning with a period of economic stagnation nor a runaway inflationary spiral.

Second, investors are worried that rising prices could harm consumer and business spending. There are already signs of this in this quarter’s corporate earnings. For households, basic necessities like food, shelter, apparel and gasoline are significantly more expensive compared to last year. Gasoline has reached a new peak and energy prices have risen 35% over the past year. Food at home, a category of the Consumer Price Index, rose nearly 12% over the same period. These prices are especially impactful because they are noticeable and unavoidable, leaving families with less to spend on other goods and services.

This has added to the financial stress of consumers. The University of Michigan’s measure of consumer sentiment is now at its lowest level in the history of the index. This measure is directly correlated with consumers’ expectations of inflation, which in turn depends on the inflation they have already experienced via gas and food prices.

So, while this is a very important indicator for markets and the economy, it is entirely backward-looking and based on measures that are widely understood. For this reason, consumer sentiment tends to be a contrarian indicator for the market – i.e., the best time to buy is when consumers feel the worst. Once the underlying economic stress begins to fade, consumer sentiment improves, and markets rebound. This is exactly what took place in the early 1980s as inflation turned around.

What does this all mean? To no one’s surprise, how markets, consumers and businesses do from here depends entirely on the path of inflation. While the Fed is trying to not contribute to the problem, the underlying issues related to supply chains, manufacturing, and energy are outside of their control. If these issues are resolved, and the largest shocks to price are behind us, then many measures of inflation could slowly begin to turn. If inflation stays worse for longer, there could be a bigger impact on corporate profits. Either way, markets are arguably positioned for the worst-case scenario and the Fed is already stepping on the brake.

While this is the first inflationary period in four decades, investors have faced numerous market challenges over the past several years. Staying invested in diversified portfolios has been the best approach throughout these periods in order to best achieve financial goals. Below are three charts that highlight these issues. 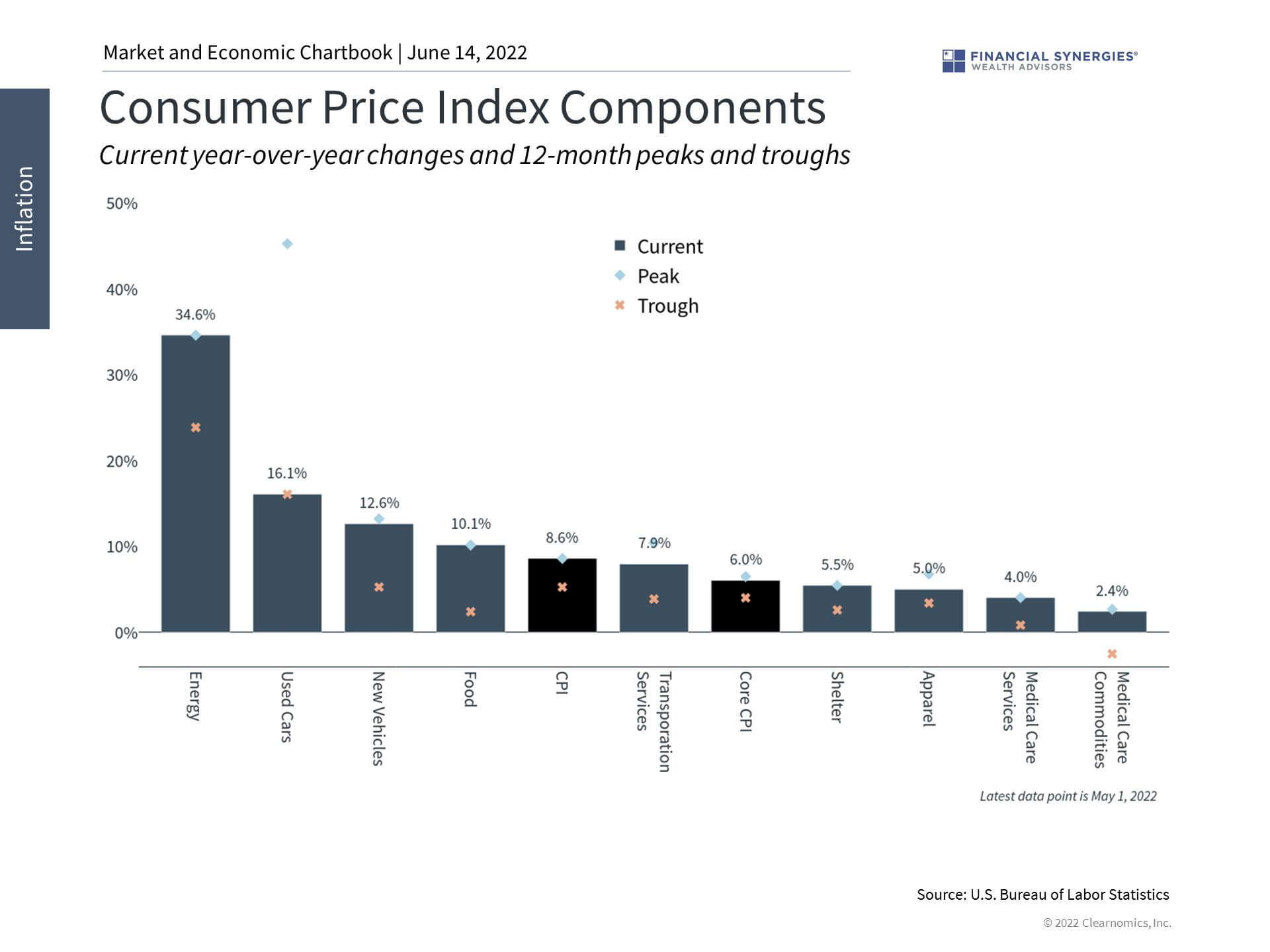 The Consumer Price Index has reached new levels, driven by accelerating prices in a number of key categories. Many consumer necessities such as energy, food, and shelter are climbing at their fastest rates over the past 12-months. This directly impacts consumers’ pocketbooks and reduces their ability to spend on other items. 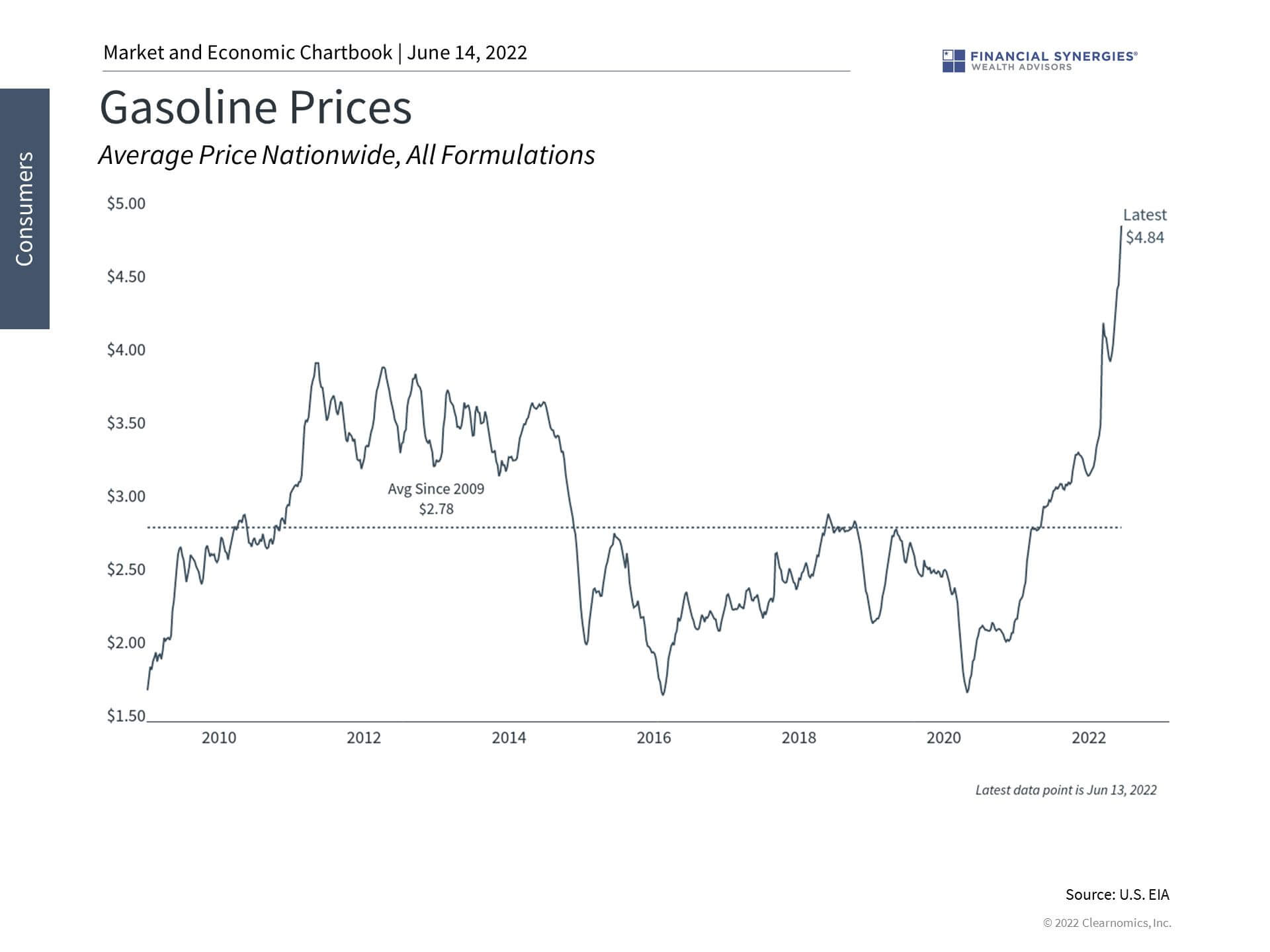 Gasoline prices, in particular, hurt consumers who often have no choice but to accept greater fuel costs.

3. Consumer negativity is the worst on record 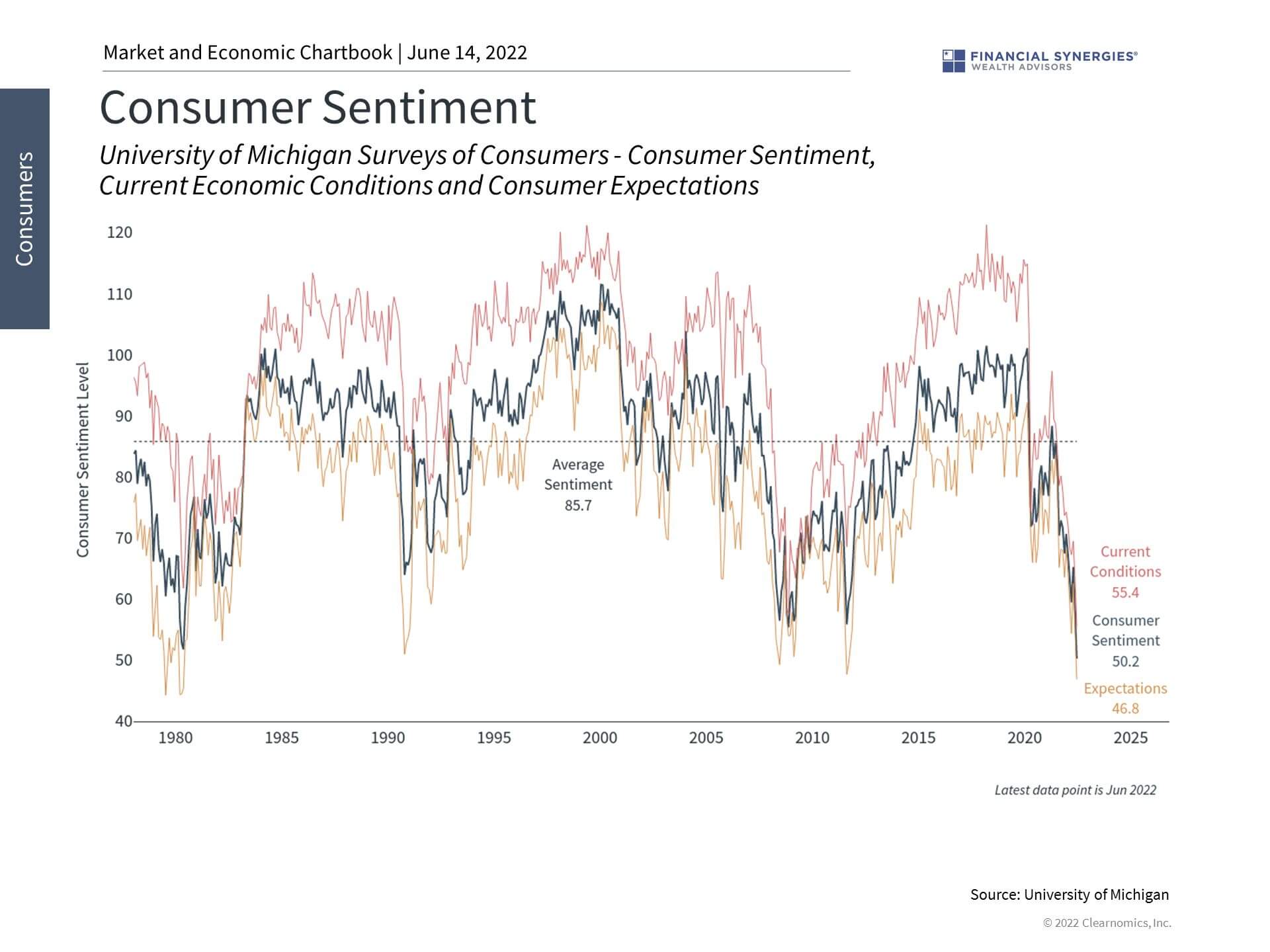 Inflation has led consumers to feel the worst since the 1980s period of stagflation. Whether this improves will depend entirely on where prices go from here. Still, consumer sentiment tends to be a trailing and contrarian indicator.

Many Americans have never experienced significant inflation in their lifetime, so it’s only natural that this has been a bit of a shock to the system. But it’s also not unprecedented. The Fed’s actions and interest rate moves have been painful, but necessary to curb inflation. And although there will probably be more pain in the short-term, taming inflation will lead the stock and bond markets to recovery in the long-term.