Last month I met with a potential client who was struggling with this very decision. He’s hesitant to invest his money because the market has been up and he feels that it will inevitably come back down. His account has been in cash for over 15 months, and he’s missed out on the entire 2016/2017 bull market.

We decided to meet in a Charles Schwab branch near his home, and while I waited in the lobby I stumbled across this chart, which was very helpful in our conversation. 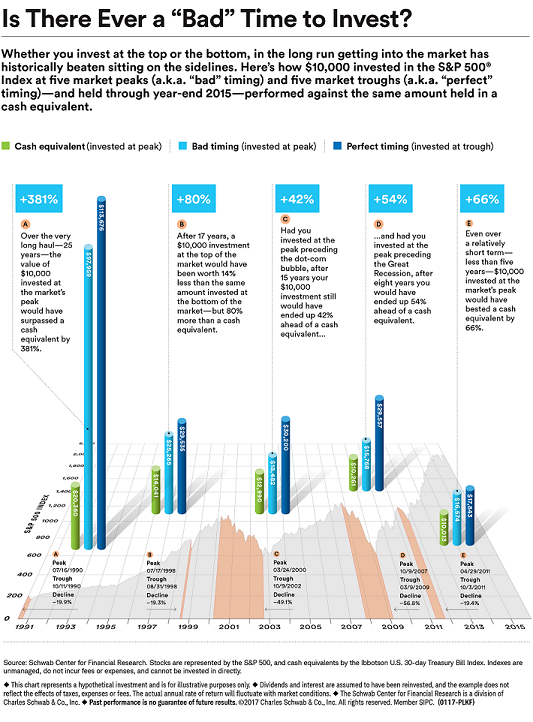 The chart is a little complex, but its message is simple: Whether you invest at the top or the bottom, in the long run getting into the market has historically beaten sitting on the sidelines. The chart compares how $10,000 invested in the S&P 500 would have grown if invested at five market peaks (bad timing) and five market troughs (perfect timing) vs. a cash equivalent through the year 2015.

As the old saying goes, it’s about time in the market, not timing the market. If you’re struggling to decide when to put your money into the market, consider whether the money is intended for a short-term purpose versus a longer-term purpose. Cash that is intended to be used or spent over the next 1-2 years should never be invested in the stock market. But if you have more time to let the money grow, the time to invest is right now.

Where Should the Market Be?