Recent economic data show that we may be near the halfway point in the recovery from the COVID-19 shutdown. However, there is evidence that the second half may take much longer and be more difficult. This is because there are really two recoveries underway: many areas which were not directly affected by the public health crisis bounced back rapidly while others may need years to fully recover.

This balance has been enough to drive the stock market to new highs as the market continues to look forward. However, long-term investors should continue to focus on these economic trends as the pandemic continues.

Specifically, last Friday’s jobs report shows that 661,000 jobs were added across the country in September. While this is a very large number by historical standards, it is slower than in recent months when millions of jobs came roaring back. Overall, more than half of the jobs lost during the recent crisis, about 11.4 million out of 22 million, have already been regained. This is driven by the ability of many Americans to return to work after being furloughed and temporarily unemployed during the shutdown, pushing the unemployment rate down to 7.9%. While this is still high, it is far lower than the 20% or more that many economists had feared.

Many other economic data points corroborate this trend. Industrial production, consumer spending, housing activity, and other areas all bounced back from recent lows. This suggests that much of the activity that was put on hold from March to May was simply delayed. This is often referred to as “pent-up demand” since many consumers still need homes, factories need parts, businesses need services, and so on.

However, many parts of the economy are still struggling and will continue to face challenges. Some data suggest that restaurant dining activity is down 40% across the country and as much as 60% in places such as New York State. At the moment, employment at restaurants and bars is 2.3 million lower than before the crisis. There is evidence that travel activity is down by about 60% as well. Industries such as hotels, restaurants and leisure, and areas of the transportation sector will likely continue to face challenges.

Overall, the jobs data also suggest that some workers have dropped out of the labor force in recent months. The labor force participation rate, which measures the percentage of working-age Americans with a job or are looking for work, has fallen to its lowest level since the late 1970s. This is a trend that began in the early 2000s and accelerated during the 2008 global financial crisis.

Thus, the data suggest that while there has already been a significant economic recovery, there is also a divergence in economic fortunes. Navigating this period is challenging as the stock market continues to reach new highs. Still, those with the discipline to stay invested while maintaining perspective on the next phase of growth will likely navigate this period better.

1. Over half of the jobs lost during the pandemic have been regained 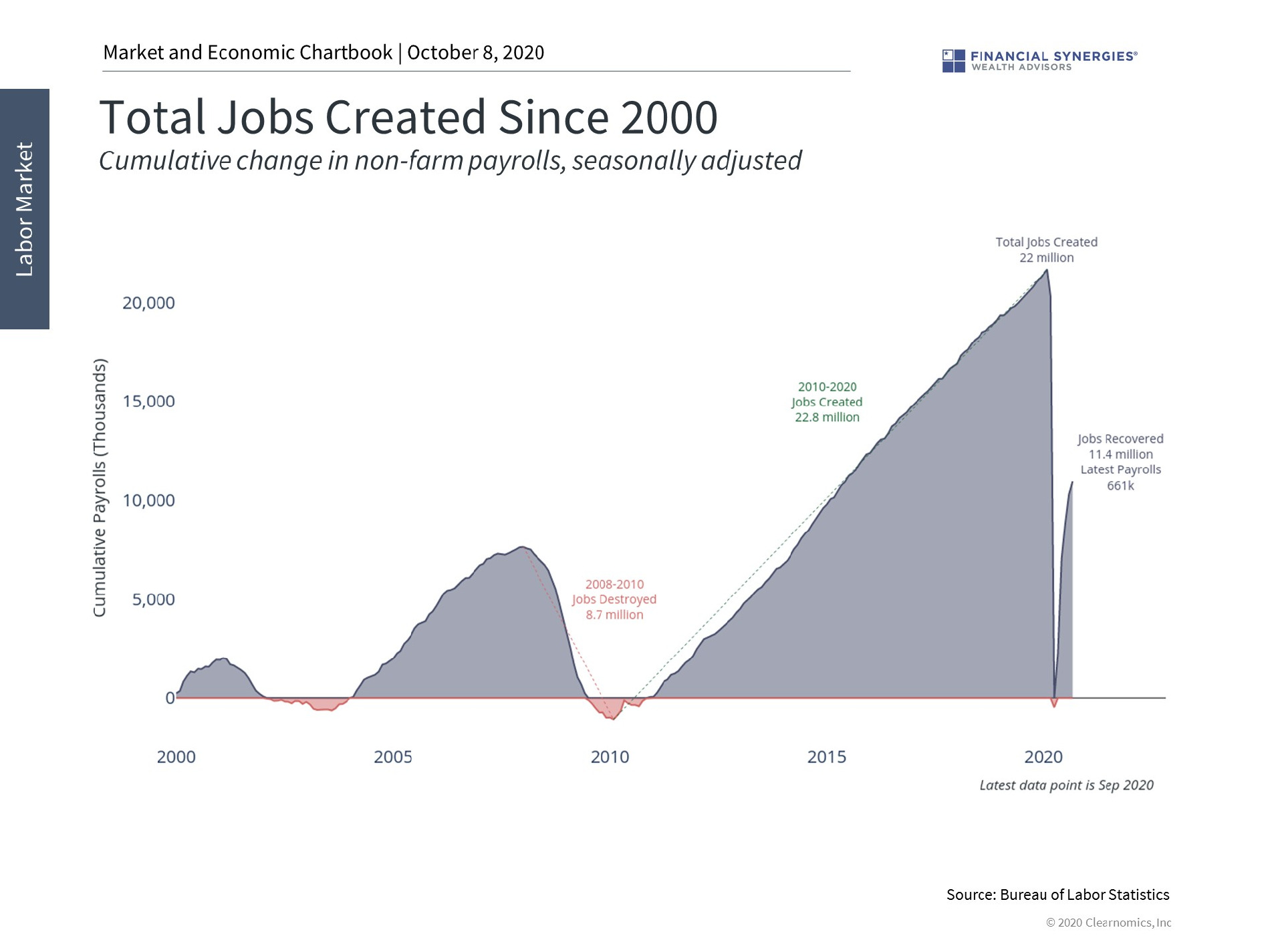 The current recession resulted in the steepest drop and subsequent recovery of jobs in history – 22 million jobs were lost in a matter of two months. At this point, more than half of those jobs – 11.4 million – have been regained. This is because many were able to return to work once the economy began to reopen.

2. Many Americans, however, have dropped out of the labor force 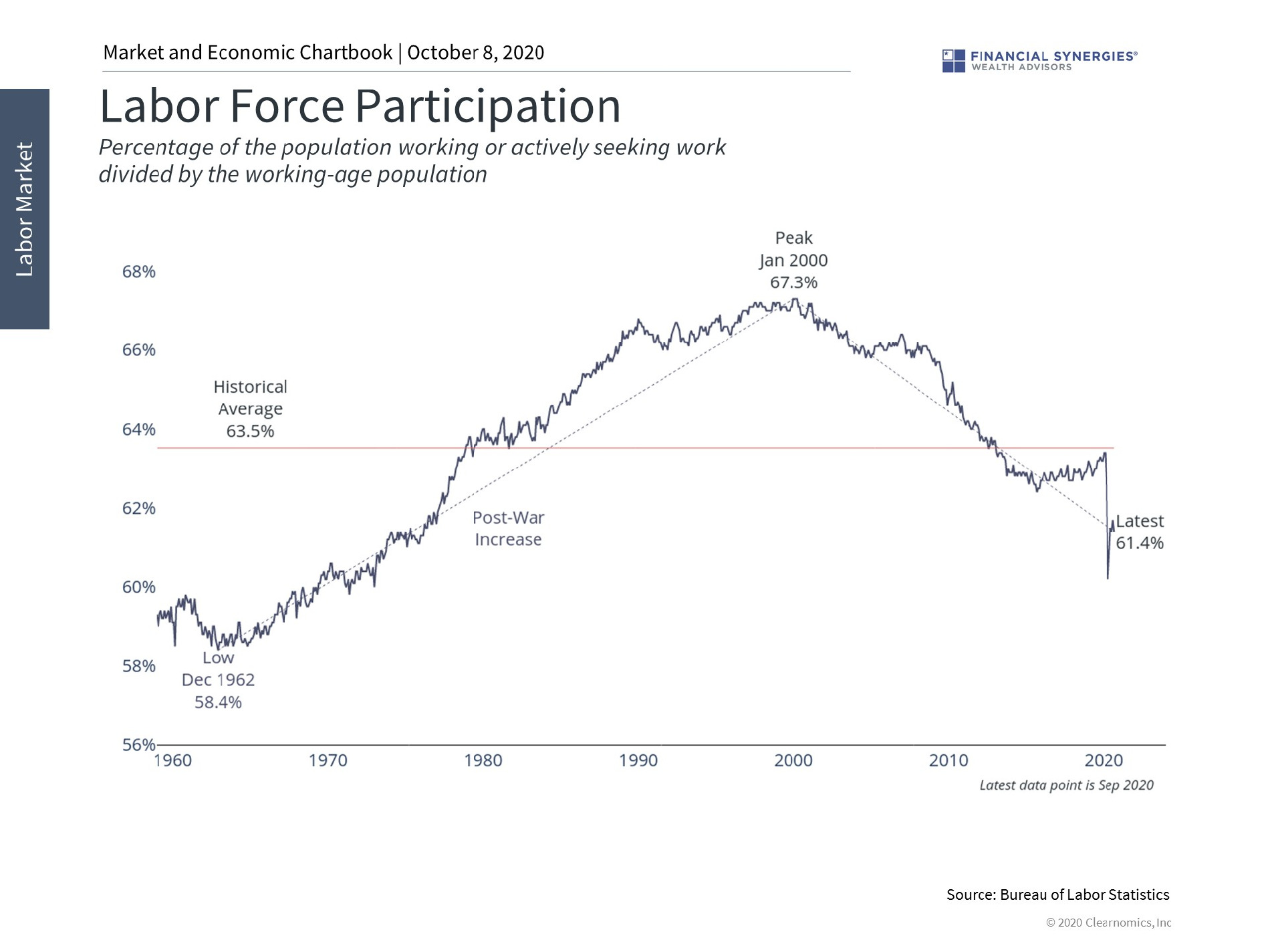 One worrisome trend is that the labor force participation rate has fallen. This measures the percentage of the population that is working or is actively seeking work. The fact that it has declined suggests there may be Americans who have given up on finding new jobs. This is a trend that began two decades ago and has been driven by technology, globalization, and other macro-economic factors.

3. Some areas such as restaurant and travel activity will take time to recover 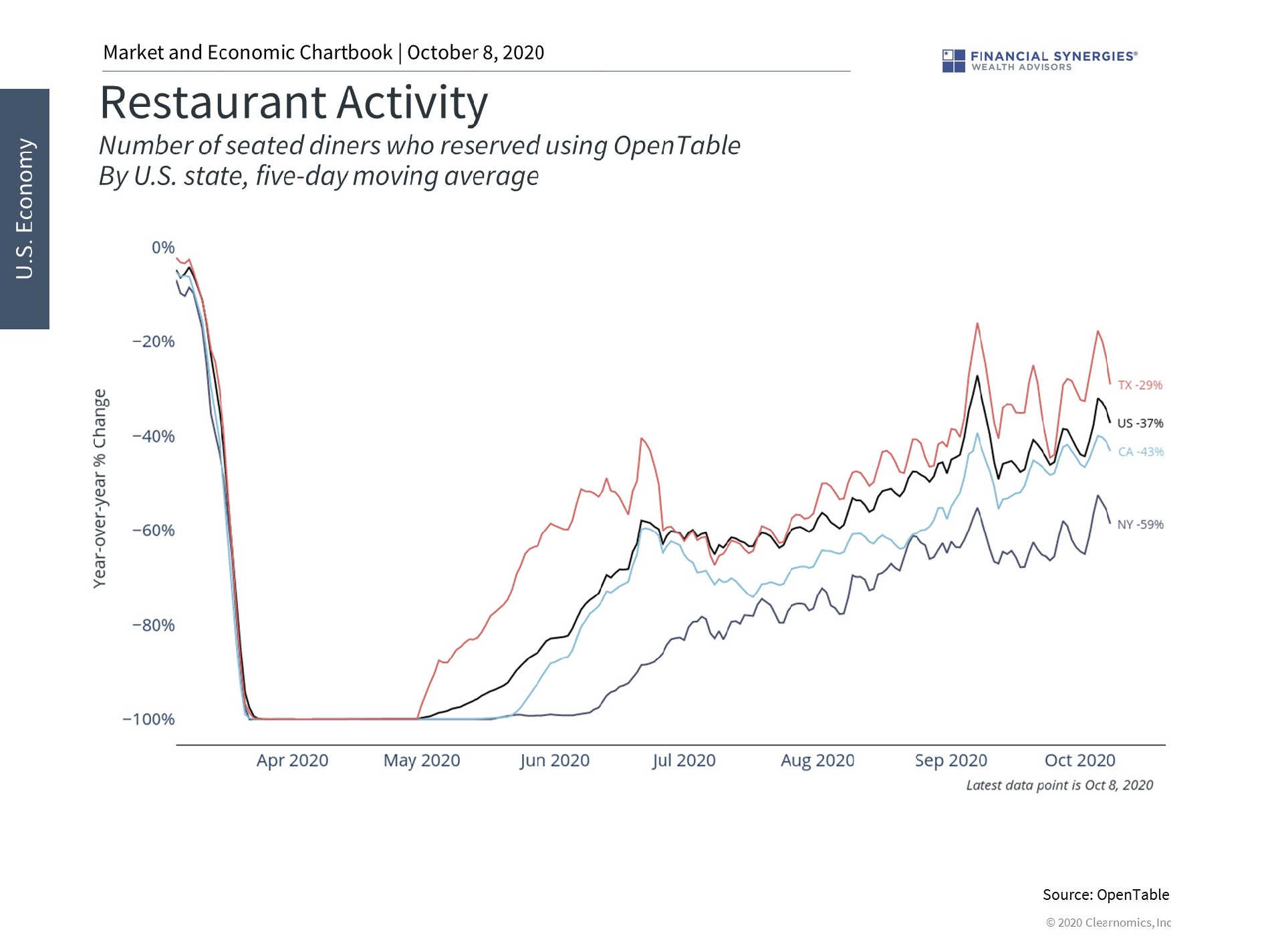 Although many parts of the economy bounced back quickly, areas such as restaurant and travel activity may take much longer to recover. Some economic data suggest that these industries are still at least 40-60% below where they were just a year ago.

The bottom line? While many areas of the economy came roaring back once businesses reopened, there are also areas that may take much longer to recover. Investors should continue to focus on these long-term trends as the pandemic continues.