With the second quarter behind us, many investors continue to worry about escalating trade tensions. This has been a challenging environment for all markets, especially international ones. Fears of a protracted trade war, slower global growth, and a stronger U.S. dollar have resulted in heightened volatility and a sliding market.

As we’ve discussed in the past, over the long run, prices in the stock market are based on both economic fundamentals (i.e. “cash flows”) and perceptions of risk (i.e. the “discount rate”). Last year, the stars aligned on both fronts. Global growth had swung into high gear while perceptions of risk were at historic lows. This resulted in a rapid rise in the stock market with virtually no volatility. But as every long-term investors knows, such low levels of volatility are unsustainable.

To that end, the administration’s stance on tariffs should come as no surprise since this has been a major policy point since the presidential election. While there is significant short-term uncertainty as trade negotiations escalate, the most likely scenario is for tensions to be eventually resolved.

In the worst case scenario, tariffs would create a lose-lose scenario for the U.S. and its trading partners. However, even if this were to occur, economic and earnings growth expectations for the U.S., developed markets, and emerging markets are strong enough to absorb the impact. For instance, investors expect Emerging Market earnings to grow substantially over the next twelve months. Even if these expectations were to decline, it would still represent a significant gain in that asset class.

With the global economic backdrop still on sound footing, both U.S. and international investments should continue to look attractive once these trade issues are resolved and investors shift their focus back to measures of fundamental growth.

1. The market is throwing a tariff tantrum 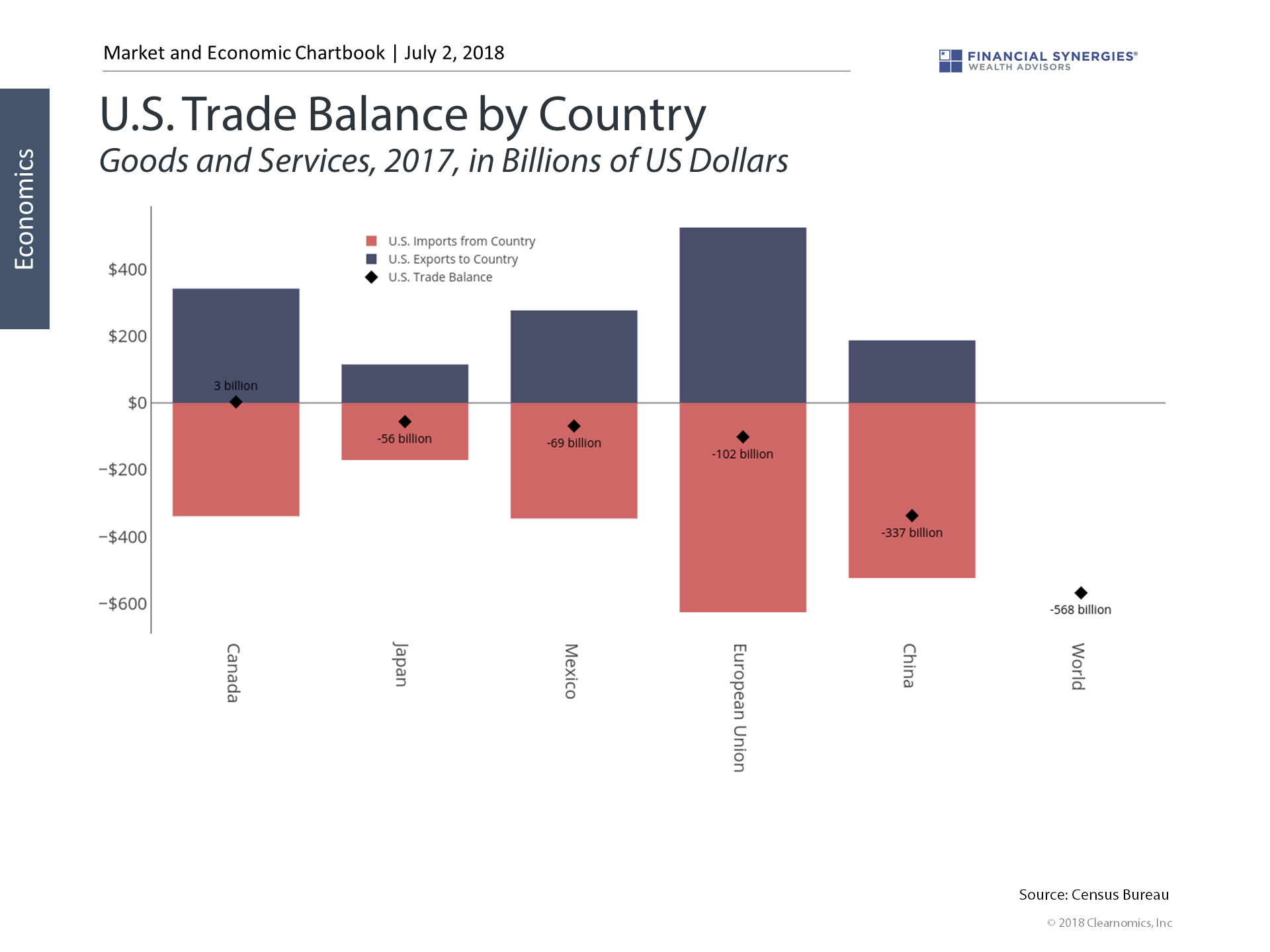 Markets continue to react to ongoing threats of trade tariffs between the U.S. and its major trading partners. In all likelihood, current uncertainty represents an opening gambit in trade negotiations, rather than an ending point. This is because trade policy has been a key political issue for the administration. Many U.S. workers have faced tremendous difficulty as technology has made many jobs obsolete and globalization has moved jobs overseas. The administration’s goal of protecting domestic industries taps into this unrest.

The chart above shows the U.S. trade balance across major trading partners. In 2017, the total U.S. trade deficit reached $568 billion. Countries such as China and Mexico are easy political targets due to our sizable imbalances with these trading partners. However, the U.S. ran significant trade deficits with our other allies as well, including the European Union and Japan. Thus, no country, whether an ally or not, is safe from potential trade renegotiation, resulting in market uncertainty.

2. This is a challenging environment for international investments 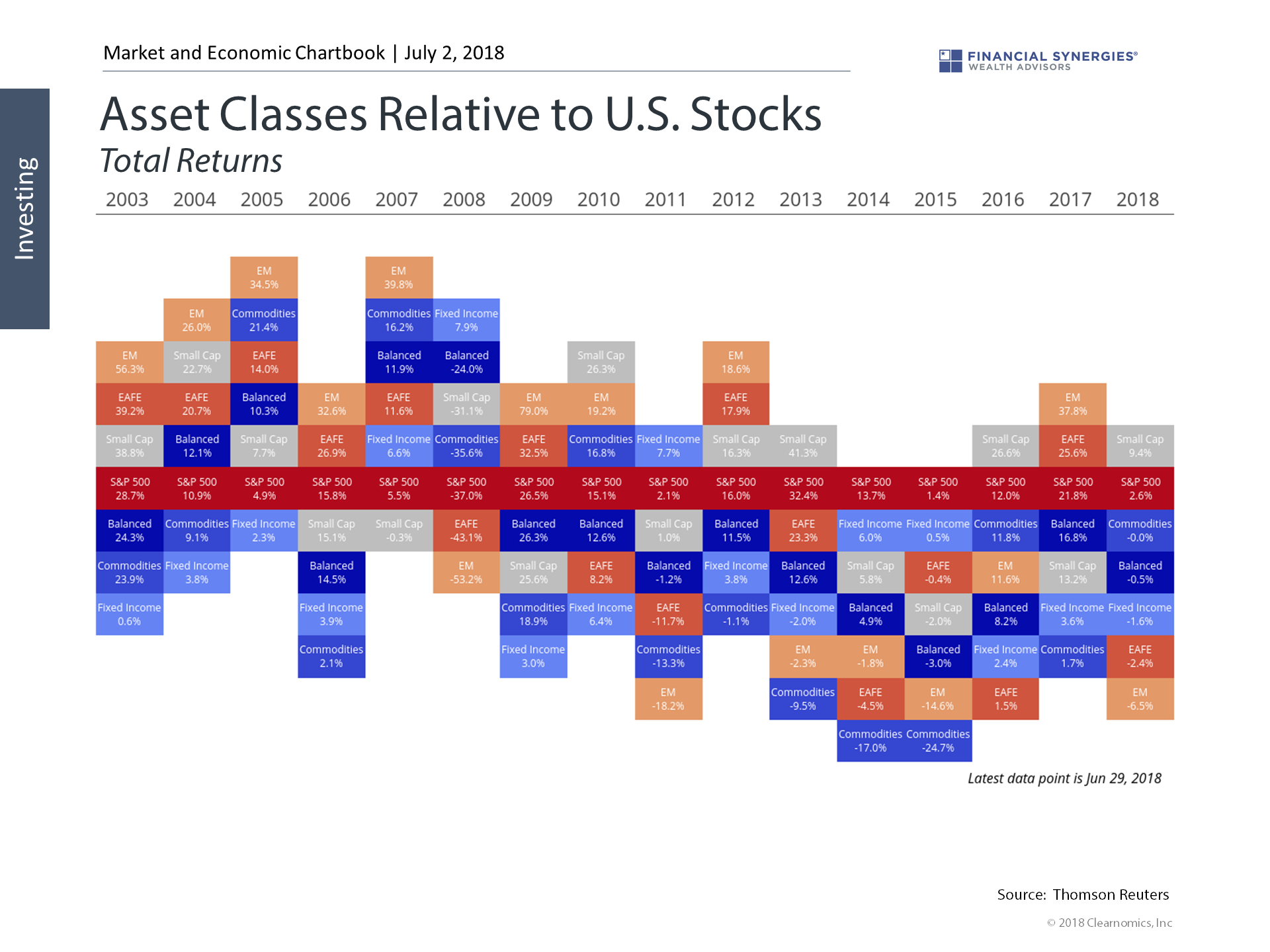 While the U.S. market has held on to slight gains for the year, international markets (shown on the chart as MSCI EAFE and EM) are still in negative territory. This is because some measures of economic growth have stalled out this year, trade tensions have created significant uncertainty, and the rising U.S. dollar has put pressure on international investments.

Still, international investments are expected to be more volatile than U.S. stocks. Over the past 15 years, the EM and EAFE indices have swung wildly – occasionally the best performers, but also occasionally the worst. At the moment, fundamentals still look attractive for these markets, as shown in the next chart. Thus long-term investors can take advantage of the upside in these asset classes while smoothing over year-to-year swings by staying well-diversified. 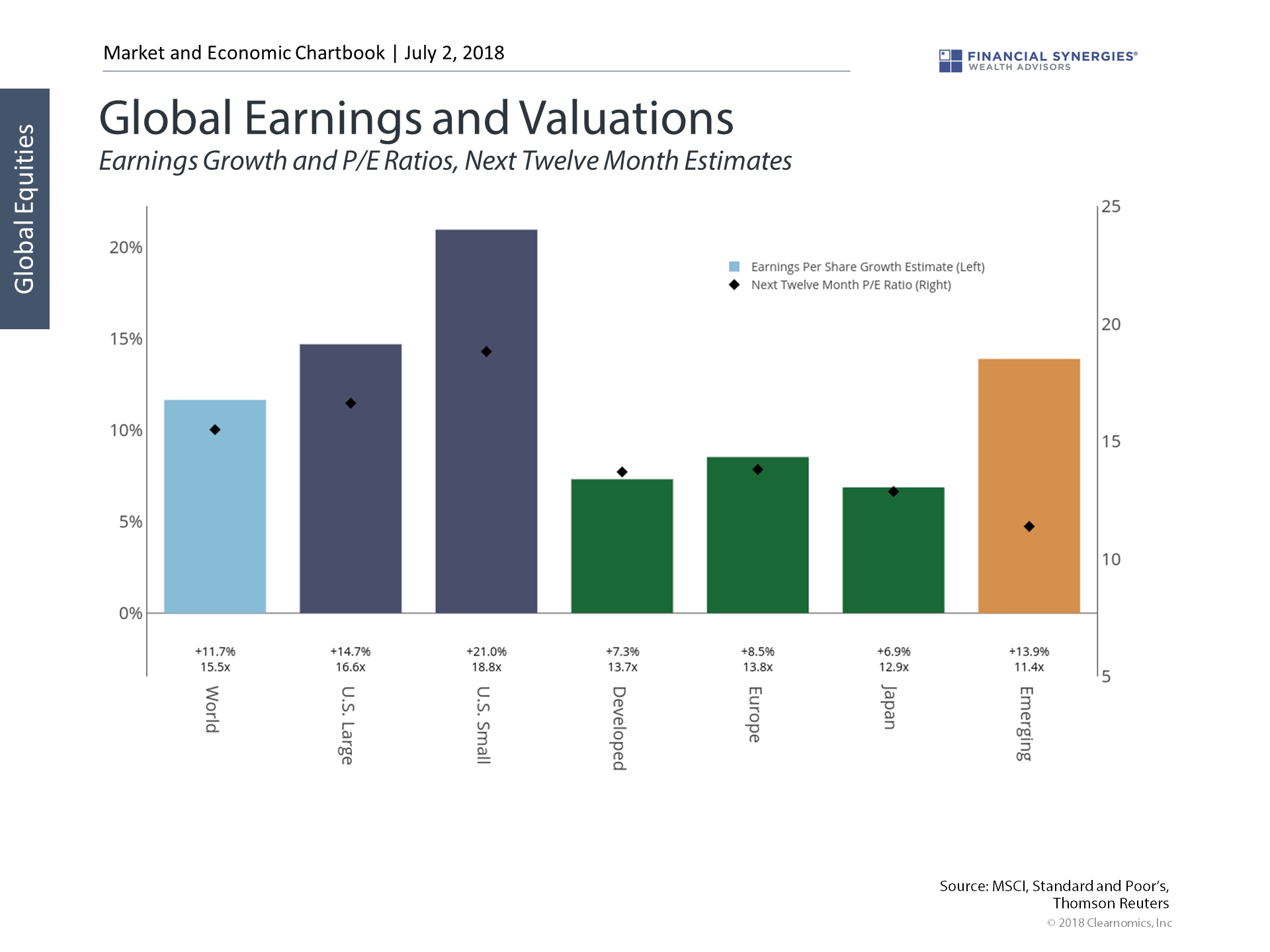 The chart above shows that worldwide corporate earnings are expected to grow by nearly 12% over the next twelve months. U.S. large caps, developed markets and emerging markets are expected to experience earnings growth of roughly 15%, 7% and 14% respectively.

These are solid growth numbers that represent an acceleration from the last several years, especially for international companies. Additionally, valuations in many global markets aren’t yet as high as in the U.S. This suggests that there are still attractive opportunities for internationally-diversified investors.