Despite the recent market recovery, interest rates are still quite low. The yield on the 10-year Treasury had risen above 3.2% as recently as last November, but is now hovering around 2.6%. As a result, the yield curve has “twisted” over the past year, with short-term rates rising and long-term rates falling. While most investors don’t appear to be over-reacting to these dynamics, unlike they had last year, it’s still important to understand what this means for diversified portfolios.

The long-term context of interest rate moves is that they have been declining for almost four decades, resulting in an unprecedented bull market in Treasuries and other bonds. This trend continued over the course of this economic expansion, with the 10-year yield not bottoming until 2016 when it reached around 1.35%. This means that, for much of this expansion, both stock and bond prices were rising in tandem.

A number of factors have kept long-term interest rates lower for longer over the past year. First, global economic uncertainty and market volatility have kept a lid on rates, especially long-term ones. Part of this uncertainty is due to geopolitical events, such as trade negotiations, while part is due to slower economic growth worldwide.

Second, the fact that the Fed has signaled that they would be more patient has pushed interest rates down further, including at the shorter end of the yield curve. In other words, the fact that the Fed may slow down or pause its pace of rate hikes has pushed up stock and bond prices together. As discussed above, this is a familiar pattern over the course of this cycle.

While this dynamic has boosted investor returns over the past ten years, and may continue to do so for some time, unfortunately it can’t last forever. There is a reason that stocks and bonds are negatively correlated over long periods of time – i.e. that their prices often move in opposite directions. Eventually, stock prices may rise too high and become increasingly volatile, or bond yields may fall too low and hit a floor.

However, not only is this okay for long-term investors – it’s exactly what drives portfolio diversification. Not all asset classes can go up each year. By diversifying, we can maintain balance over long periods of time in order to achieve our financial goals.

Interest rates fell to historic lows following the financial crisis due to slow global growth and easy central bank policy. The recovery has witnessed two periods when long-term rates rose above 3%, only to hit a ceiling each time. The 10-year Treasury yield is now around 2.6%, significantly lower than last year’s highs.

This is due to global economic uncertainty, broad market volatility and a possible pause in Fed rate hikes. As uncertainty around issues such as trade wars are resolved, interest rates could rise further again.

2. The yield curve continues to “twist” 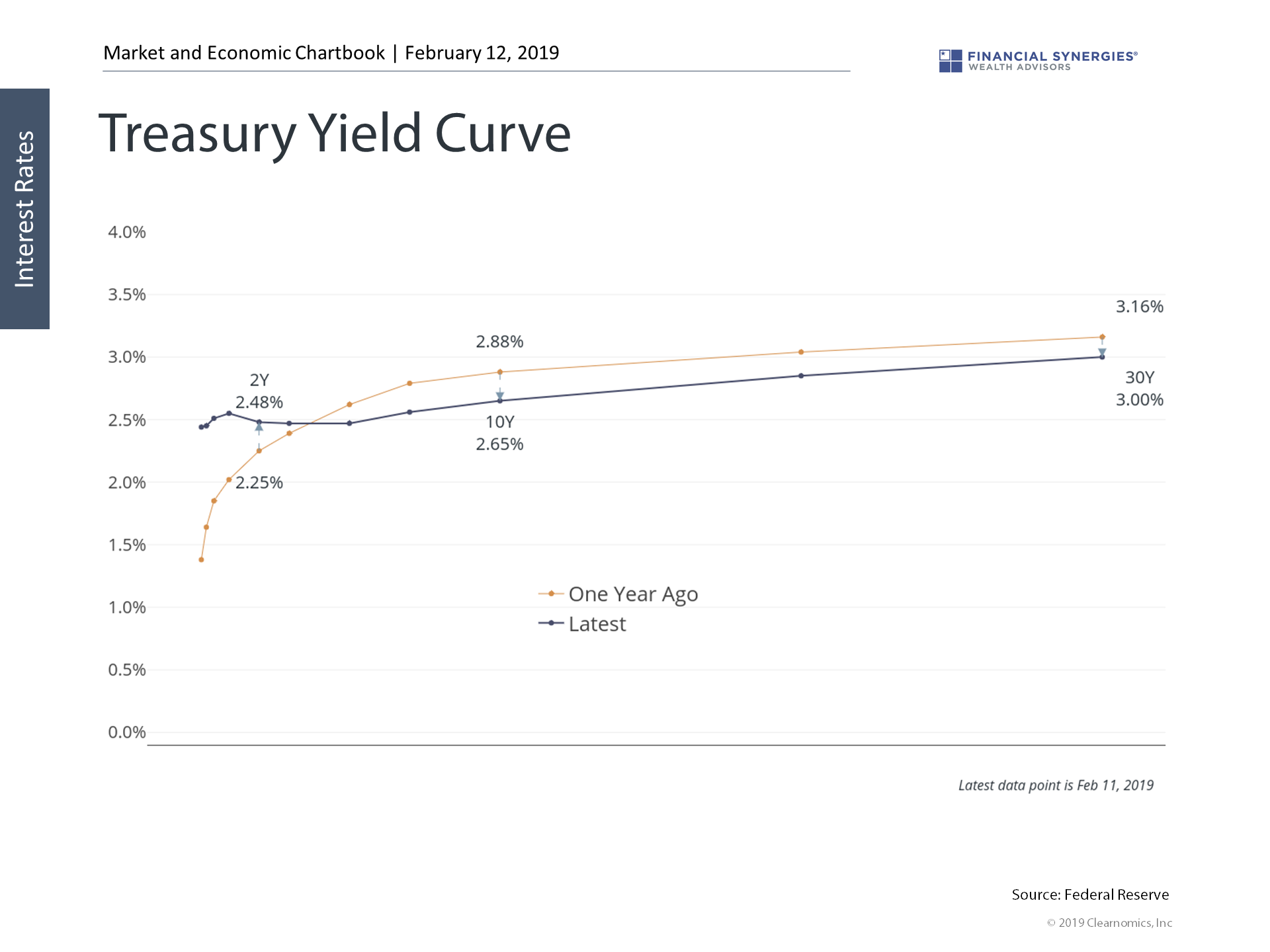 The yield curve is a traditional indicator of economic health and recessions, and a significant source of investor nervousness last year. The curve continues to flatten and is even twisting as short-term rates rise and long-term rates fall from last year’s levels.

3. The Fed has signaled that they will be patient 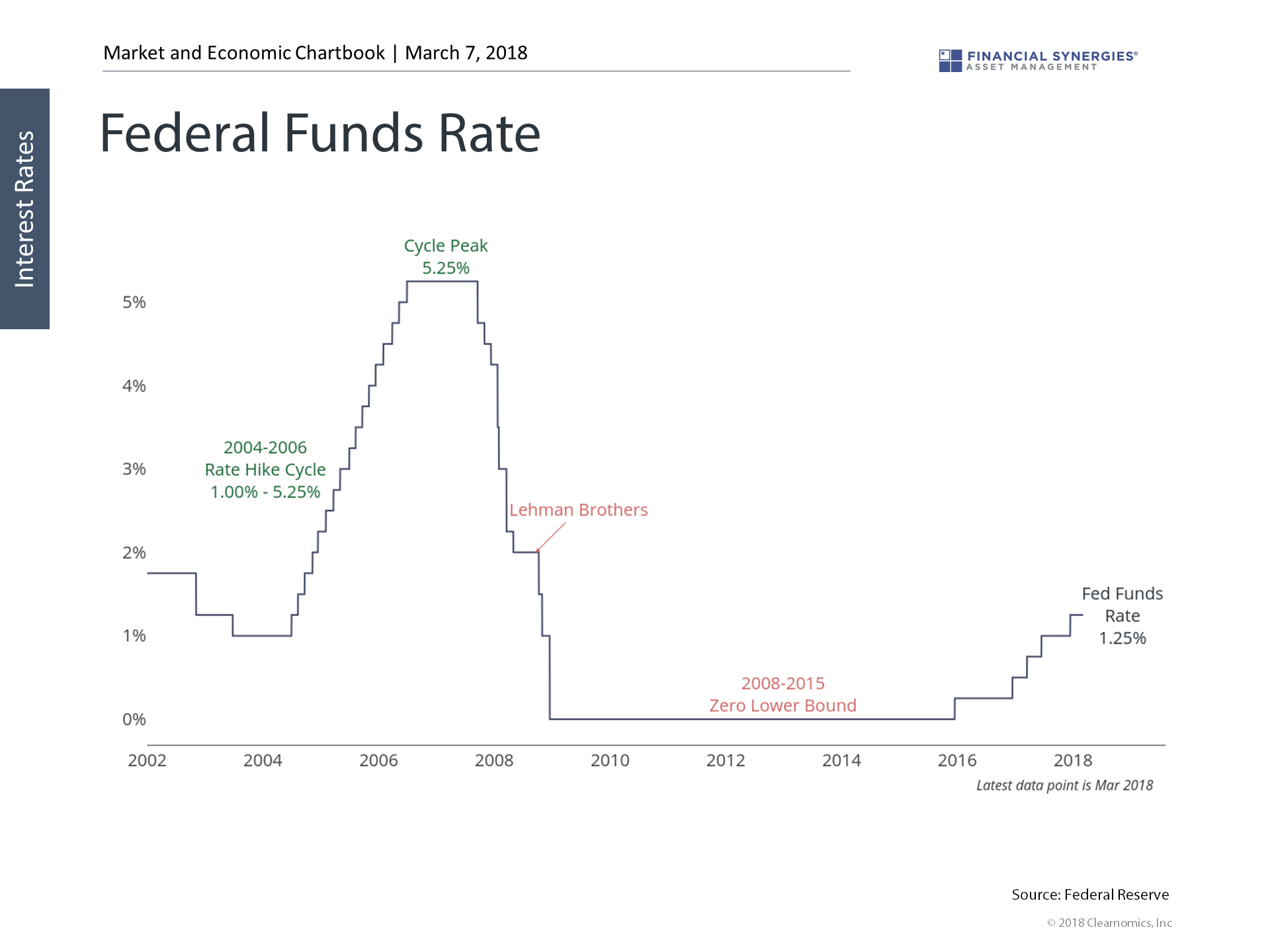 A healthy economy, as evidenced by the low unemployment rate and rising inflation, had kept the Fed on its path of monetary tightening. After nine rate hikes, the federal funds rate is only in the range of 2.25- 2.50%, as shown in the chart above.

More recently, in response to economic uncertainty and market volatility, the Fed has signaled that they may be more cautious. The fed funds futures market suggests that the Fed may not only pause its path of rate hikes, but may even cut rates in 2020. This could alleviate some of the yield curve flattening that we’ve seen over the past couple of years, but may also keep interest rates lower for longer.