The Power of Compound Interest

Albert Einstein called compound interest “the eighth wonder of the world.” He went on to say, “He who understands it, earns it; he who doesn’t, pays it.”

Let’s say you keep the profit invested, and you earn another 7% the following year. Your $107,000 would grow to $114,490. That extra $490 is the effect of compounding. You only earned that kicker because you kept the $7,000 invested. You earned interest on your interest.

When you begin investing, the effects of compounding aren’t obvious. In the graphs below, we continue the example of $100,000 invested in a diversified portfolio which experiences an average annual return of 7%. Our original investment is shown in gray, and the growth is shown in blue. Note how little the portfolio value changes over the first few years. The three-year graph shows just a small sliver of growth.

However, as time marches on, the compounding begins to build momentum. After 10 years, the portfolio has nearly doubled in value, and after 25 years, you have over 5 times as much as you started with!

It is also interesting to look at our first three years of investment history on the 25-year graph. We were only able to achieve this exceptional long-term result because of the foundation built by those first few years.

“Imagine you have an ice cube sitting on the table in front of you. The room is cold, and you can see your breath. It is currently twenty-five degrees. Ever so slowly, the room begins to heat up.

The ice cube is still sitting on the table in front of you.

Still, nothing has happened.

Then, thirty-two degrees. The ice begins to melt. A one-degree shift, seemingly no different from the temperature increases before it, has unlocked a huge change.

Breakthrough moments are often the result of many previous actions, which build up the potential to unleash a major change.” (emphasis mine) 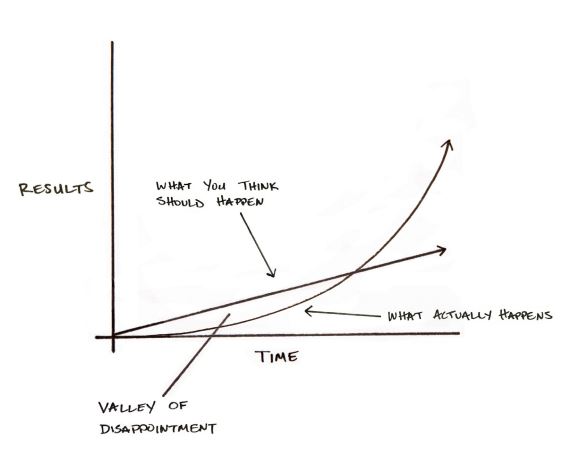 Reproduced with permission from James Clear.

Similarly, compound gains are the result of smaller foundational gains all along the way. The only way to achieve the long-term benefit of compounding was to be patient with the foundational years at the beginning.

As Clear concludes, “All big things come from small beginnings.” If you have just started investing with us, take heart. The temperature is rising, even if you don’t feel it just yet.

Special thanks to Brock Hedgecoke, who created the first three graphs in this article.

Bryan is a CERTIFIED FINANCIAL PLANNER™ and a Qualified Kingdom Advisor™. He uses his expertise to develop investment strategies to protect and grow clients’ retirement savings. Bryan is a proponent of Elegant Simplicity, the idea that we can work through complex issues surrounding a financial problem and arrive at a sophisticated but simple solution.   Read Bryan’s Profile Here • Read More Articles by Bryan