The Midterms Are Coming!

U.S. midterm elections take place on November 8 amid significant market, economic, and geopolitical uncertainty. Inflation continues to be a top issue for voters and while some prices such as those for gasoline have improved, price pressures remain the highest in 40 years.

Although we’ve had a great run in October, major stock market indices are also still hovering in bear market territory, which hurts consumer and investor sentiment. These factors make this election cycle especially heated across both sides of the aisle. However, as I repeat just about every election cycle, history shows that among the many ways that elections are important, informing investment decisions is not one of them.

Current polls suggest that we could end up with a divided government after two years of Democrats controlling the White House and Congress. There are 34 seats in the House that are toss ups, creating a path for Republicans to reach the 218 or more seats needed to form a majority. Democrats are projected to maintain a slim majority in the Senate since the Vice President breaks any ties. Who knows where it will all shake out, but a divided Congress could result in more Washington gridlock, reflecting our polarized political landscape.

As citizens and taxpayers, there is no civic duty more important than participating in elections. This is because elections determine the principles we want to uphold and type of country we want. Regardless of which side of the aisle we’re on, it’s critical as citizens to make our voices heard. 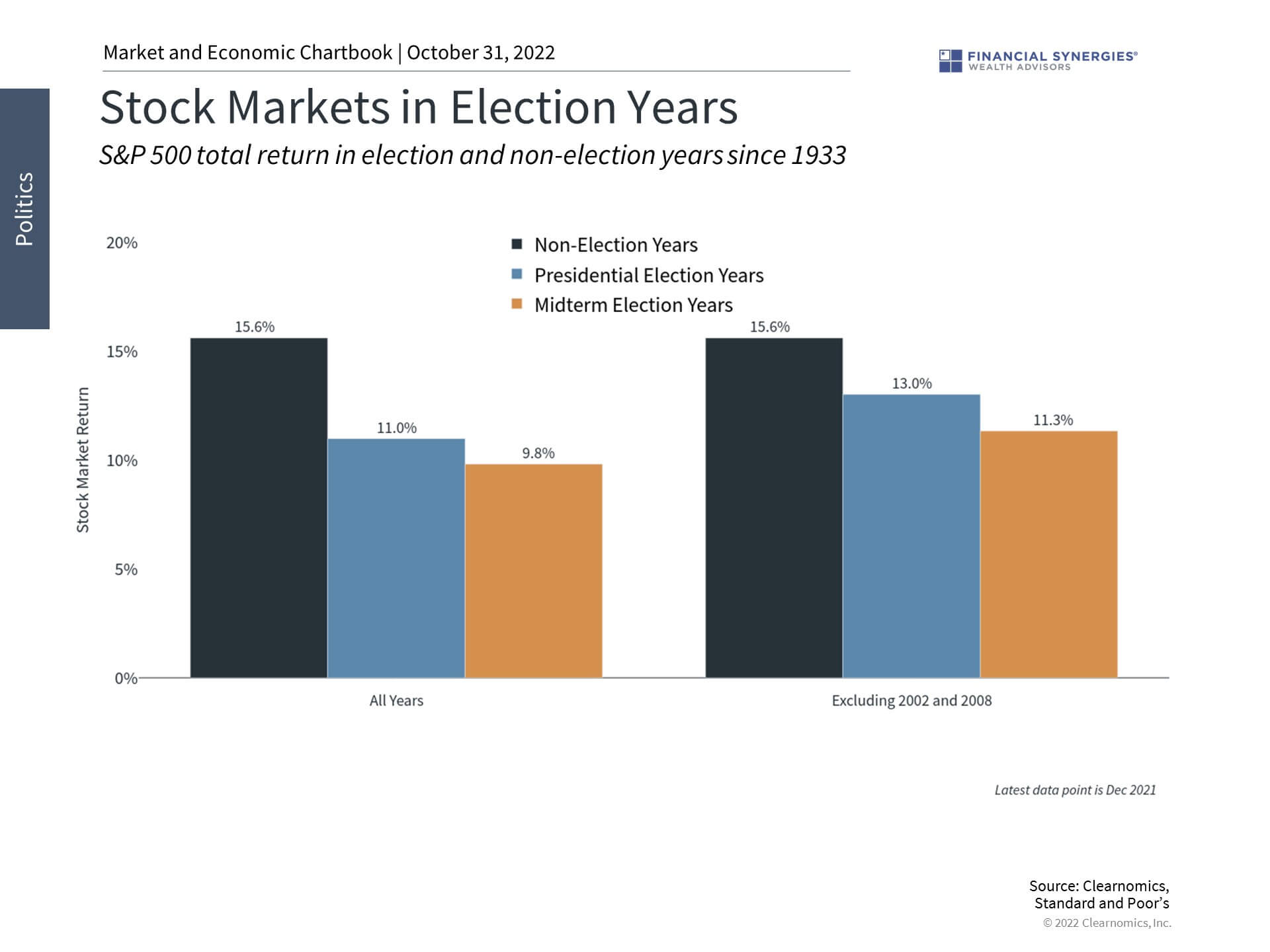 It seems natural to assume that politics should impact stock market returns. After all, elections do affect economic policies which directly impact specific industries and companies. However, how this impacts broader financial markets is often not as straightforward.

History shows that markets have done well in a variety of political configurations under both Democrats and Republicans and, conversely, that poor market conditions often have little to do with politics. The chart below shows that although there are variations between party configurations, they are all quite positive. It is not the case that one type of party leadership always results in poor economic growth or market returns, and vice versa. 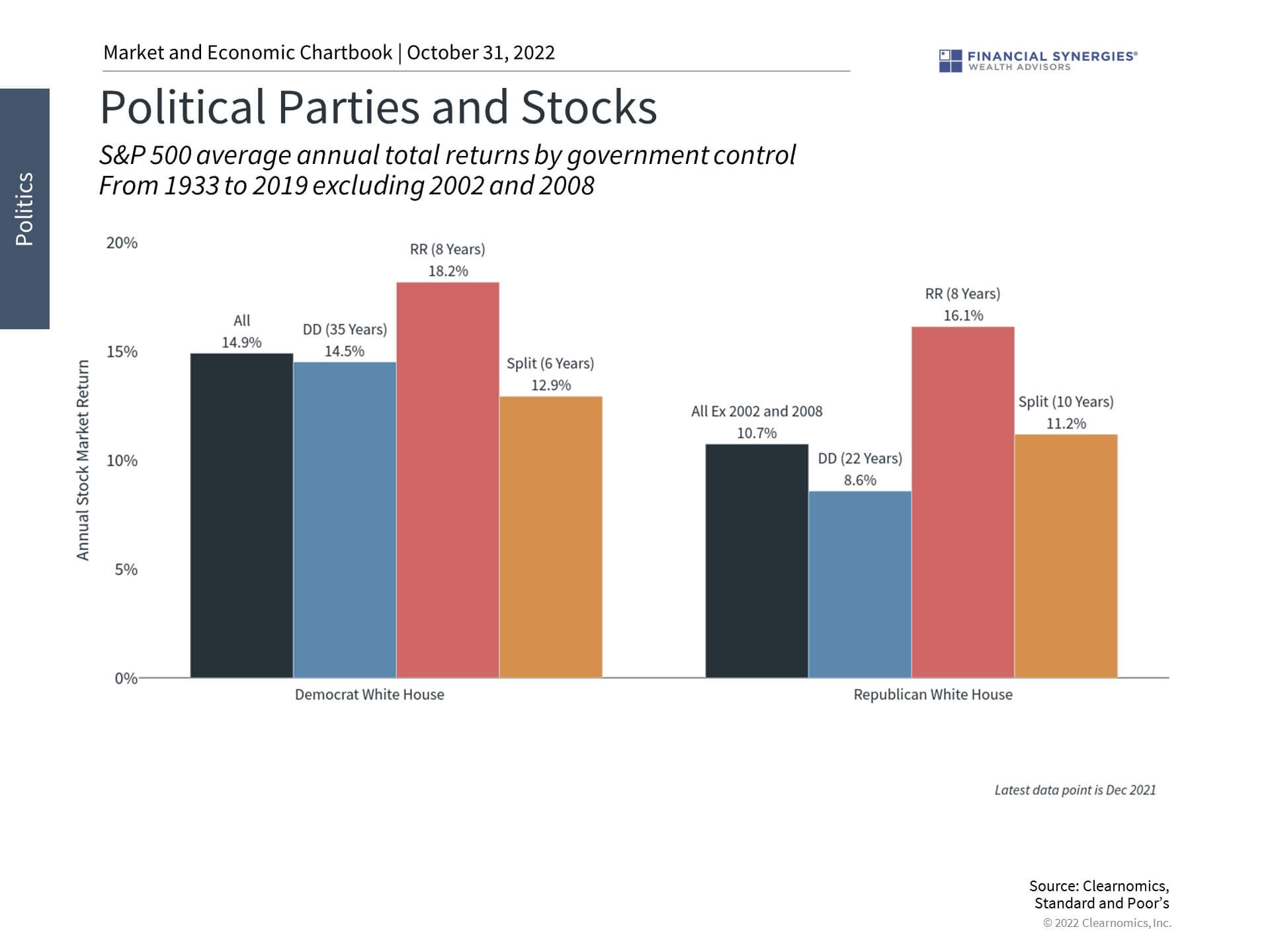 Of course, political views can be strongly held by investors, distracting us from achieving financial goals. Avoiding the urge to allocate portfolios based solely on these views can be a challenge. Still, there are three important reasons to stay disciplined during election seasons.

First, history does not support avoiding election years or a particular political party. The first chart above shows that while midterm elections do have somewhat lower returns on average, they are still strongly positive going back to the Great Depression. Of course, this is a moot point at the moment given the bear market environment we’re in.

Additionally, the basic statistics that are often cited suggesting one party performs better than another are often skewed by small sample sizes (there have been only 15 presidents since 1933), significant outlier events (by chance, much of the dot-com, housing and pandemic market crashes took place under Republican presidencies), and many confounding variables such as what else is happening in the world and economy.

Second, it’s the full economic cycle that matters for investment returns and this often has less to do with who’s in office than other factors that drive growth. For instance, in the 1990s, it’s unlikely that the Clinton administration and the Republican controlled Congress at the time were the main drivers of the tech boom of that era.

Similarly, it’s hard to argue that the George W. Bush White House or the split Congress at that time were the reasons for the subsequent bear market of the early 2000’s or the later housing crisis. These were driven by technological and economic trends that were larger than politics.

Third, economic policies are difficult to evaluate and often work with a lag. There are always pundits – on both sides of the aisle – predicting doom and gloom based on the other party’s proposals. While there are policies that can promote long-run investment spending and labor force growth, the record shows that it’s incredibly difficult to predict the economic impact of any particular proposal. For instance, while historical corporate tax cuts may have resulted in short-term jumps in the stock market, the true economic benefits occurred over years and decades across political cycles – and far beyond the attention span of short-term traders and media coverage.

Investors should focus on the long run despite heated election rhetoric 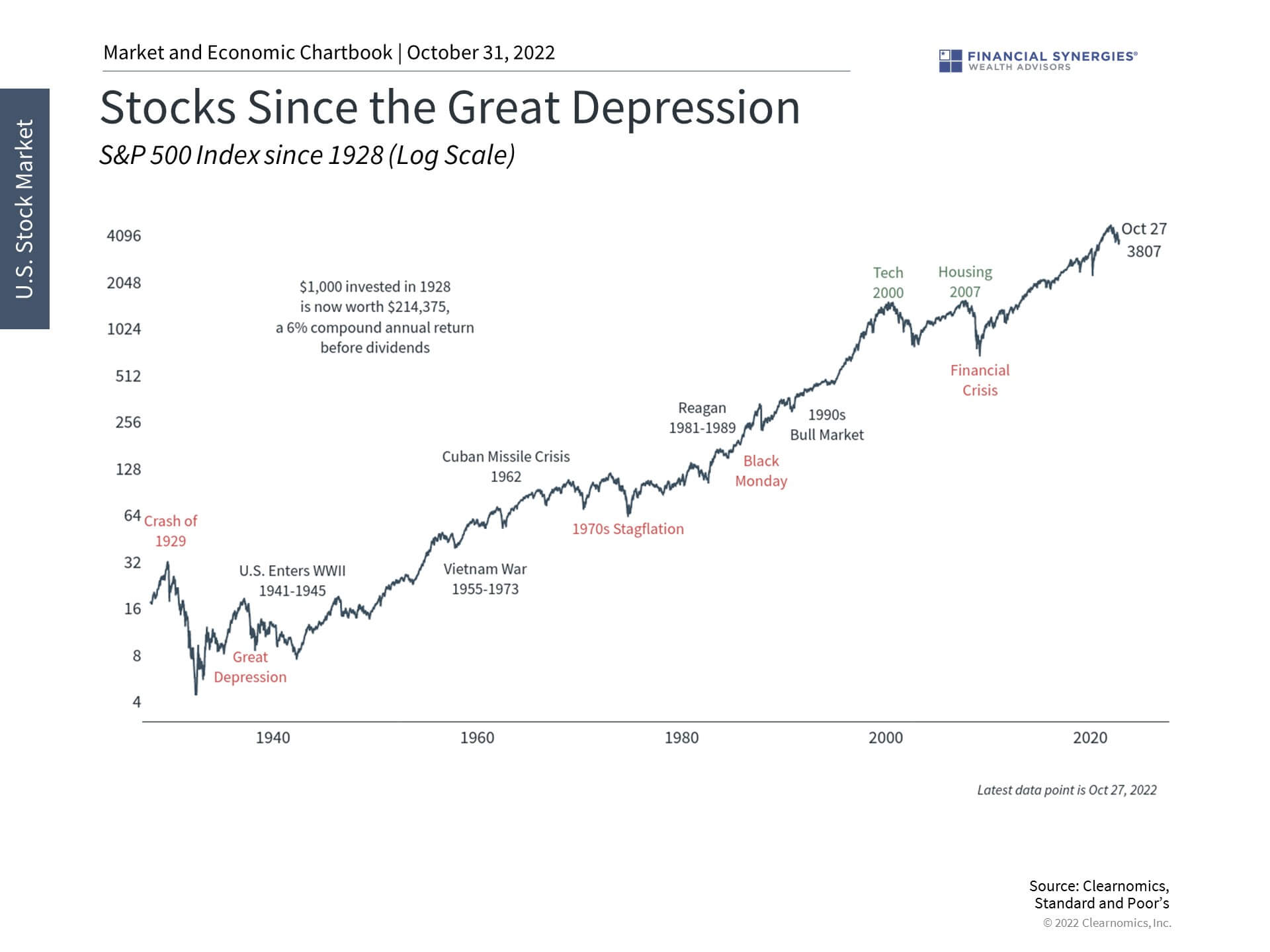 The economy and market are in precarious positions due to inflation, geopolitics, and many other issues. This may lead many investors to focus too much on the upcoming election and adjust their portfolios inappropriately. The chart above shows that markets have done well over long periods across different types of political leadership. It’s important to maintain balance in this environment, regardless of political views.